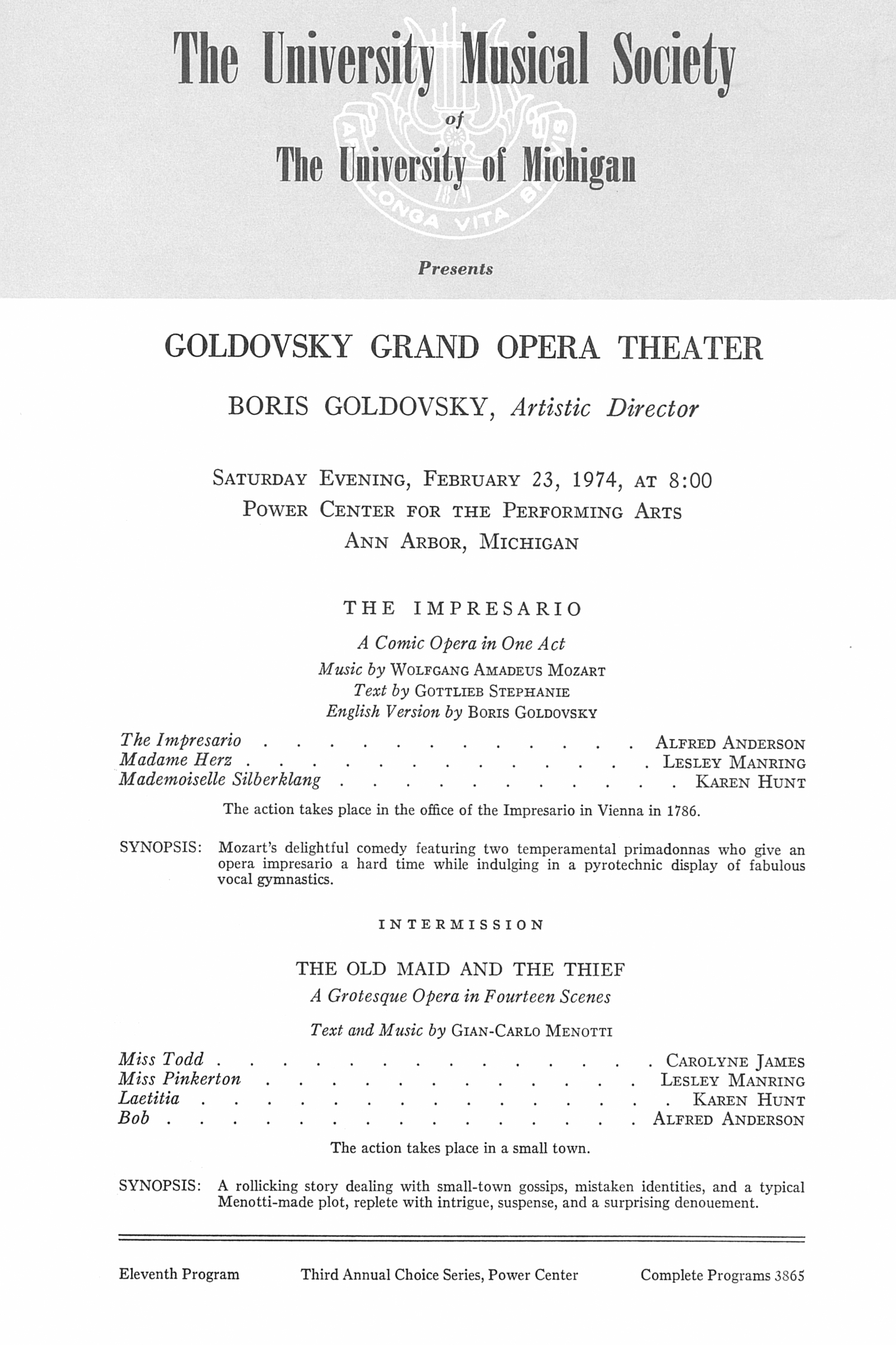 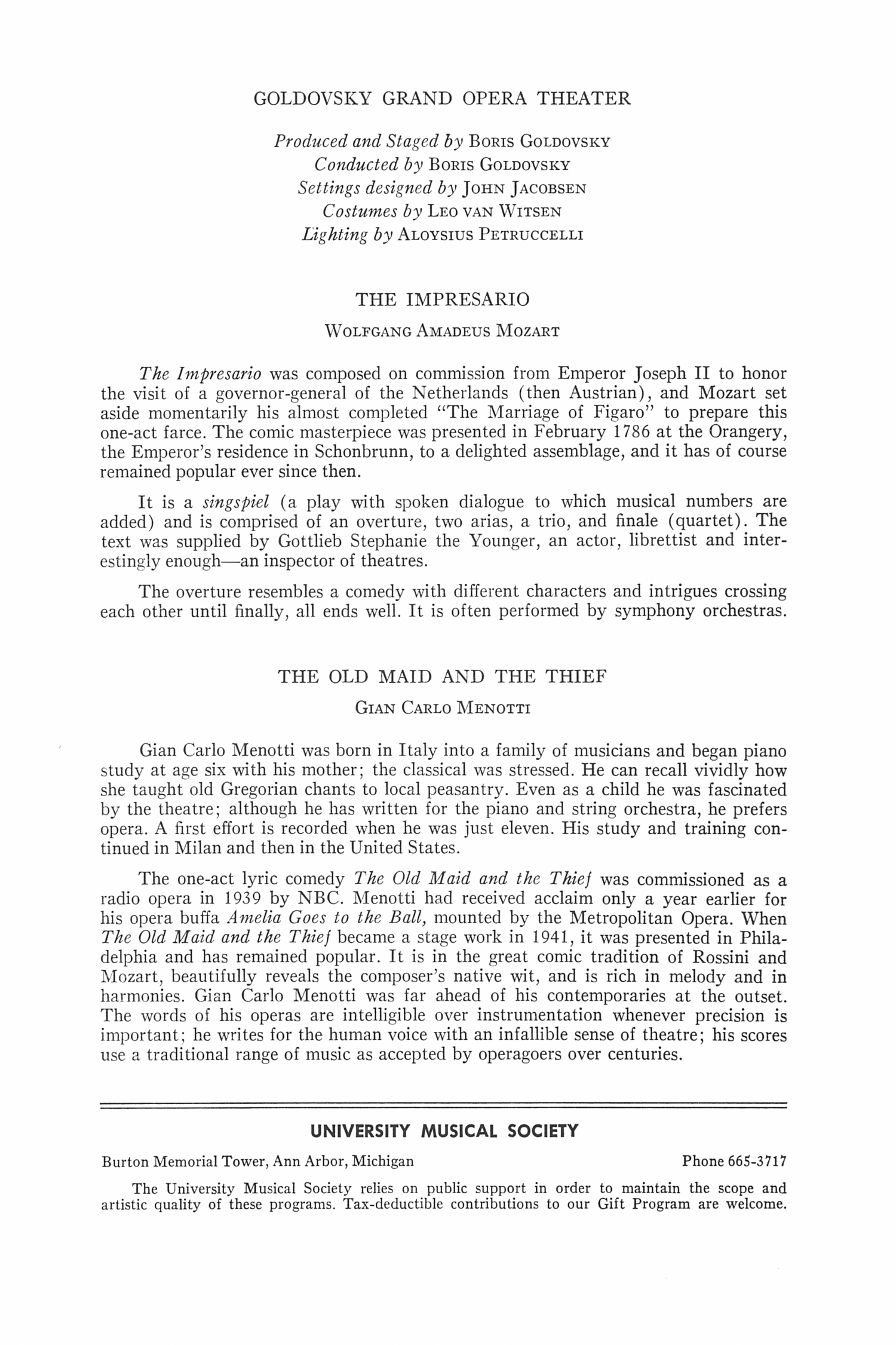 The University Musical Society
of
The University of Michigan
Presents
GOLDOVSKY GRAND OPERA THEATER
BORIS GOLDOVSKY, Artistic Director
Saturday Evening, February 23, 1974, at 8:00
Power Center for the Performing Arts
Ann Arbor, Michigan
THE IMPRESARIO
A Comic Opera in One Act
Music by Wolfgang Amadeus Mozart
Text by Gottlieb Stephanie English Version by Boris Goldovsky
The Impresario............Alfred Anderson
Madame Herz.............Lesley Manring
Mademoiselle Silberklang...........Karen Hunt
The action takes place in the office of the Impresario in Vienna in 1786.
SYNOPSIS: Mozart's delightful comedy featuring two temperamental primadonnas who give an opera impresario a hard time while indulging in a pyrotechnic display of fabulous vocal gymnastics.
INTERMISSION
THE OLD MAID AND THE THIEF A Grotesque Opera in Fourteen Scenes
Text and Music by GianCarlo Menotti
Miss Todd..............Carolyne James
Miss Pinkerton............Lesley Manring
Laetitia...............Karen Hunt
Bob...............Alfred Anderson
The action takes place in a small town.
SYNOPSIS: A rollicking story dealing with smalltown gossips, mistaken identities, and a typical Menottimade plot, replete with intrigue, suspense, and a surprising denouement.
Eleventh Program Third Annual Choice Series, Power Center Complete Programs 386S
GOLDOVSKY GRAND OPERA THEATER
Produced and Staged by Boris Goldovsky
Conducted by Boris Goldovsky Settings designed by John Jacobsen
Costumes by Leo van Witsen Lighting by Aloysius Petruccelli
THE IMPRESARIO
Wolfgang Amadeus Mozart
The Impresario was composed on commission from Emperor Joseph II to honor the visit of a governorgeneral of the Netherlands (then Austrian), and Mozart set aside momentarily his almost completed "The Marriage of Figaro" to prepare this oneact farce. The comic masterpiece was presented in February 1786 at the Orangery, the Emperor's residence in Schonbrunn, to a delighted assemblage, and it has of course remained popular ever since then.
It is a singspiel (a play with spoken dialogue to which musical numbers are added) and is comprised of an overture, two arias, a trio, and finale (quartet). The text was supplied by Gottlieb Stephanie the Younger, an actor, librettist and inter?estingly enough--an inspector of theatres.
The overture resembles a comedy with different characters and intrigues crossing each other until finally, all ends well. It is often performed by symphony orchestras.
THE OLD MAID AND THE THIEF Gian Carlo Menotti
Gian Carlo Menotti was born in Italy into a family of musicians and began piano study at age six with his mother; the classical was stressed. He can recall vividly how she taught old Gregorian chants to local peasantry. Even as a child he was fascinated by the theatre; although he has written for the piano and string orchestra, he prefers opera. A first effort is recorded when he was just eleven. His study and training con?tinued in Milan and then in the United States.
The oneact lyric comedy The Old Maid and the Thiej was commissioned as a radio opera in 1939 by NBC. Menotti had received acclaim only a year earlier for his opera buffa Amelia Goes to the Ball, mounted by the Metropolitan Opera. When The Old Maid and the Thiej became a stage work in 1941, it was presented in Phila?delphia and has remained popular. It is in the great comic tradition of Rossini and Mozart, beautifully reveals the composer's native wit, and is rich in melody and in harmonies. Gian Carlo Menotti was far ahead of his contemporaries at the outset. The words of his operas are intelligible over instrumentation whenever precision is important: he writes for the human voice with an infallible sense of theatre; his scores use a traditional range of music as accepted by operagoers over centuries.
UNIVERSITY MUSICAL SOCIETY
Burton Memorial Tower, Ann Arbor, Michigan Phone 66S3717
The University Musical Society relies on public support in order to maintain the scope and artistic quality of these programs. Taxdeductible contributions to our Gift Program are welcome.