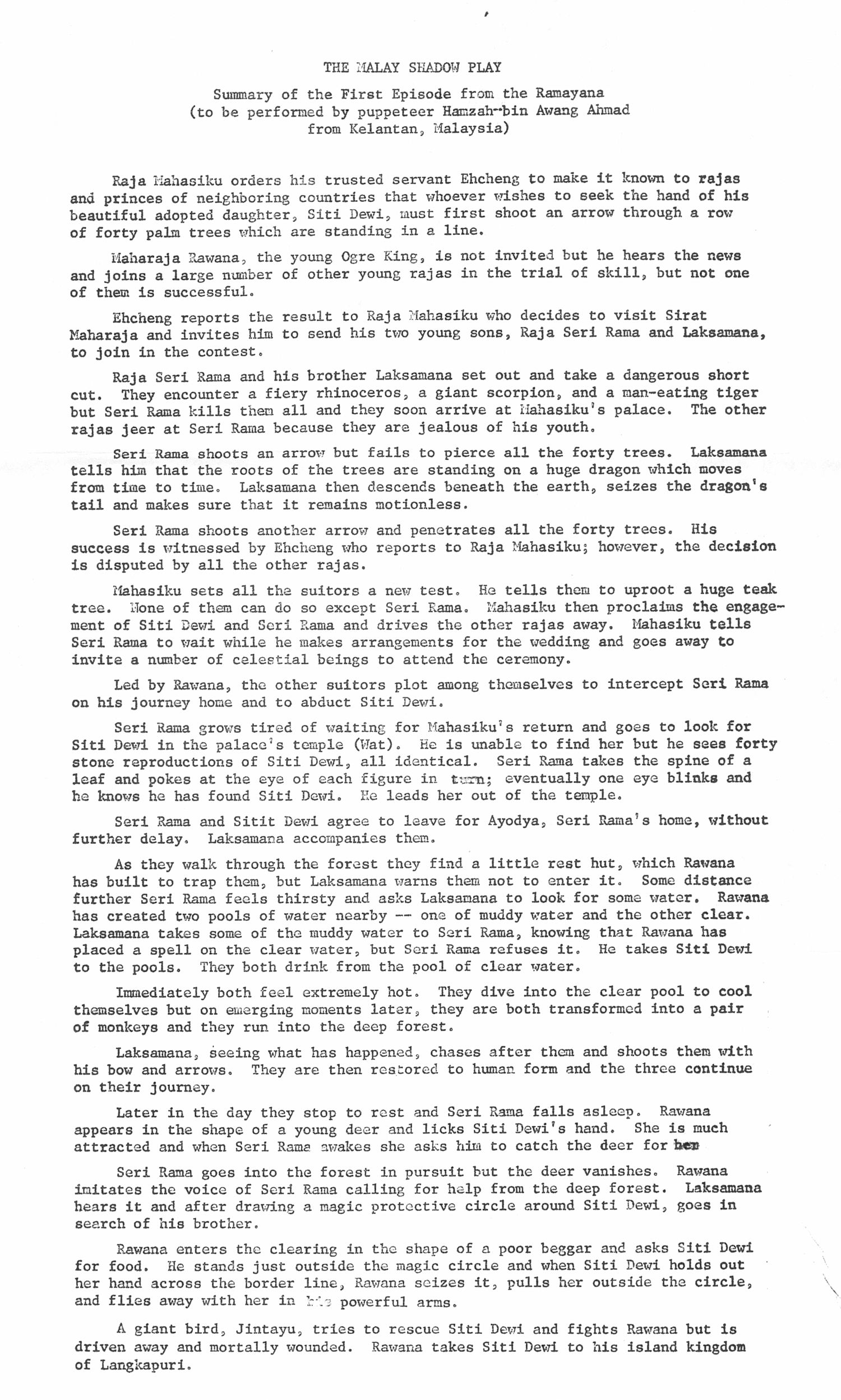 THE MALAY SHADOW PLAY
Summary of the First Episode from the Ramayana
(to be performed by puppeteer Haczah"bin Awang Ahmad
from Kelantan, Malaysia)
Raja liahasiku orders his trusted servant Ehcheng to make it known to rajas and princes of neighboring countries that whoever wishes to 6eek the hand of his beautiful adopted daughter, Siti Dewi, Liust first shoot an arrow through a row of forty palm trees which are standing in a line.
Maharaja Rawana, the young Ogre King, is not invited but he hears the news and joins a large number of other young rajas in the trial of skill, but not one of them is successful.
Ehcheng reports the result to Raja Jlahasiku who decides to visit Sirat Maharaja and invites him to send his two young sons, Raja Seri Rama and Laksamana, to join in the contest.
Raja Seri Rama and his brother Laksamana set out and take a dangerous short cut. They encounter a fiery rhinoceros, a giant scorpion, and a naneating tiger but Seri Rama kills then all and they soon arrive at liahasiku's palace. The other rajas jeer at Seri Rama because they are jealous of his youth.
Seri Rama shoots an arrow but fails to pierce all the forty trees. Laksamana tells him that the roots of the trees are standing on a huge dragon which moves from time to time. Laksamana then descends beneath the earth, seizes the dragon's tail and makes sure that it remains motionless.
Seri Rama shoots another arrow and penetrates all the forty trees. His success is witnessed by Ehcheng who reports to Raja liahasiku; however, the decision is disputed by all the other rajas.
liahasiku sets all tha suitors a new test. He tells them to uproot a huge teak tree. Hone of them can do so except Seri Rama, liahasiku then proclaims the engage?ment of Siti Dewi and Scri Rama and drives the other rajas away. Mahasiku tells Seri Rama to wait while he makes arrangements for the wedding and goes away to invite a number of celestial beings to attend the ceremony.
Led by Rawana, the other suitors plot among themselves to intercept Seri Rama on his journey hone and to abduct Siti Dewi.
Seri Rama grows tired of waiting for Mahasiku's return and goes to look for Siti Dewi in the palace's temple (Wat). He is unable to find her but he sees forty stone reproductions of Siti Dewi, all identical. Seri Rama takes the spine of a leaf and pokes at the eye of each figure in t..m; eventually one eye blinks and ha knows he has found Siti Dewi. He leads her out of the temple.
Seri Rama and Sitit Dewi agree to leave for Ayodya, Seri Rama's home, without further delay. Laksamana accompanies then.
As they walk through the forest they find a little rest hut, which Rawana has built to trap them, but Laksamana warns them not to enter it. Some distance further Seri Rama feels thirsty and asks Laksanana to look for some water. Rawana has created two pools of water nearby -ona of muddy water and the other clear. Laksamana takes some of the muddy water to Seri Rama, knowing that Rawana has placed a spell on the clear water, but Seri Rama refuses it. He takes Siti Dewi to the pools. They both drink from the pool of clear water.
Immediately both feel extremely hot. They dive into the clear pool to cool themselves but on euierging noments later3 they are both transformed into a pair of monkeys and they run into the deep forest.
Laksamana, seeing what has happened, chases after them and shoots them with his bow and arrows. They are then restored to human form and the three continue on their journey.
Later in the day they stop to rest and Seri Rama falls asleep. Rawana appears in the shape of a young deer and licks Siti Dewi's hand. She is much attracted and when Seri Rama awakes she asks him to catch the deer for hcas
Seri Rama goes into the forest in pursuit but the deer vanishes. Rawana
imitates the voice of Seri Rama calling for help from the deep forest. Laksamana
hears it and after drawing a magic protective circle around Siti Dewi, goes in search of his brother.
Rawana enters the clearing in the shape of a poor beggar and asks Siti Dewi for food. He stands just outside the magic circle and when Siti Dewi holds out her hand across the border line, Rawana seizes it, pulls her outside the circle, and flies away with her in '.'.. powerful arms.
A giant bird, Jintayu, tries to rescue Siti Dewi and fights Rawana but is driven away and mortally wounded. Rawana takes Siti Dewi to his island kingdom of Langkapuri.