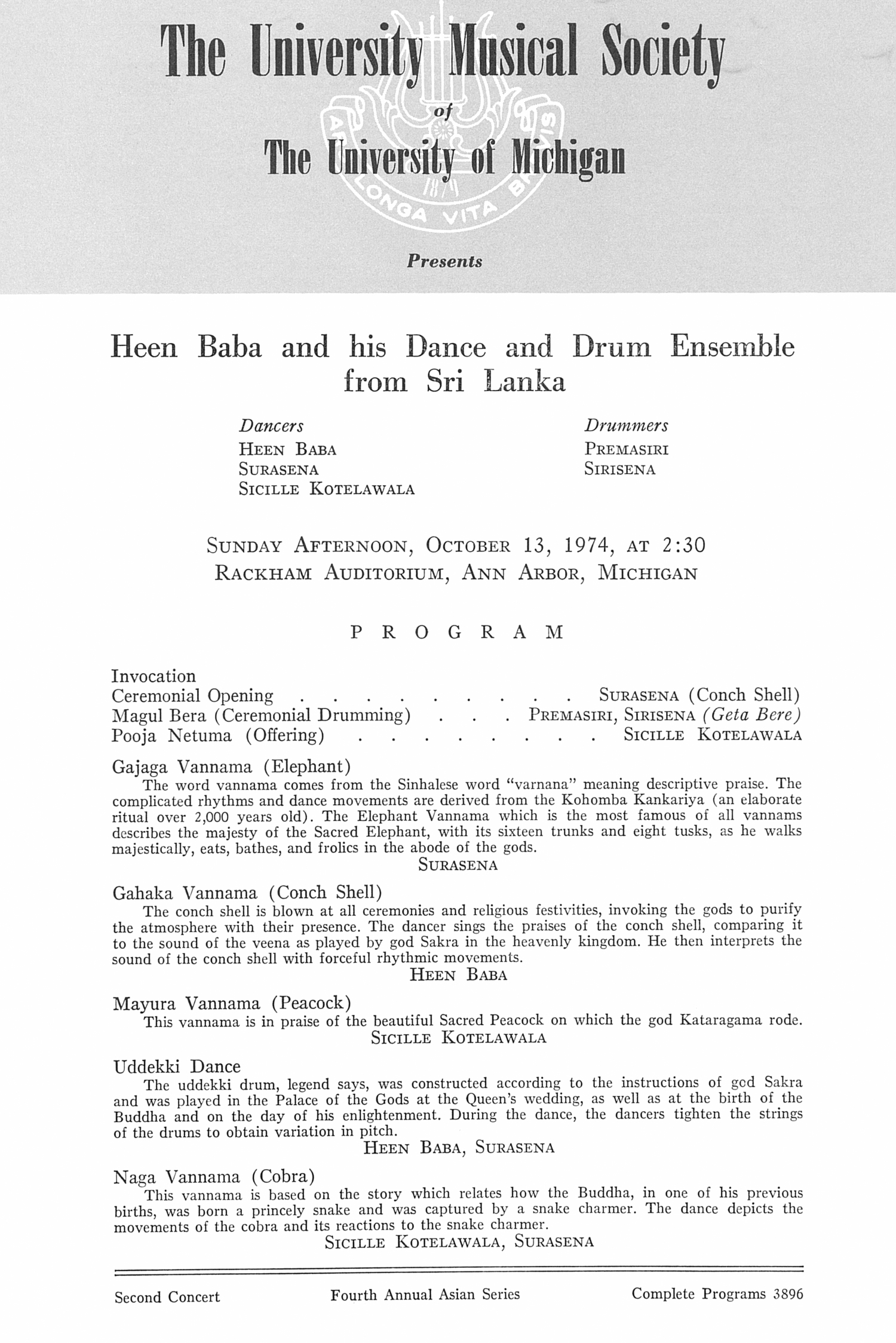 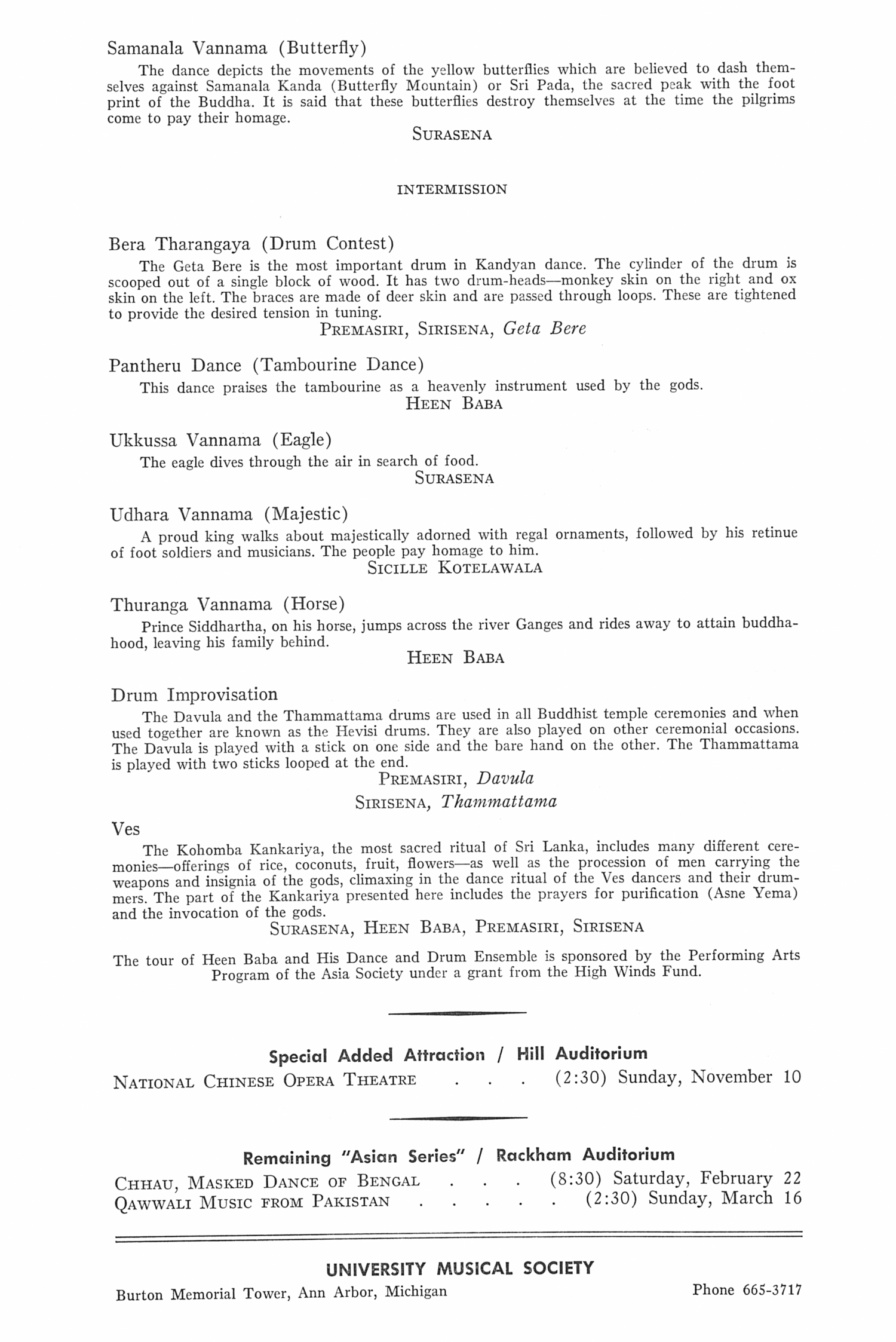 The University Musical Society
of
The University of Michigan
Presents
Heen Baba and his Dance and Drum Ensemble
from Sri Lanka
Dancers
Heen Baba
surasena
slcille kotelawala
Drummers Premasiri
SlRISENA
Sunday Afternoon, October 13, 1974, at 2:30 Rackham Auditorium, Ann Arbor, Michigan
PROGRAM
Invocation
Ceremonial Opening .... Magul Bera (Ceremonial Drumming) Pooja Netuma (Offering)
Surasena (Conch Shell) Premasiri, Sirisena (Geta Bcre)
SlCILLE KOTELAWALA
Gajaga Vannama (Elephant)
The word vannama comes from the Sinhalese word "varnana" meaning descriptive praise. The complicated rhythms and dance movements are derived from the Kohomba Kankariya (an elaborate ritual over 2,000 years old). The Elephant Vannama which is the most famous of all vannams describes the majesty of the Sacred Elephant, with its sixteen trunks and eight tusks, as he walks majestically, eats, bathes, and frolics in the abode of the gods.
Surasena
Gahaka Yannama (Conch Shell)
The conch shell is blown at all ceremonies and religious festivities, invoking the gods to purify the atmosphere with their presence. The dancer sings the praises of the conch shell, comparing it to the sound of the veena as played by god Sakra in the heavenly kingdom. He then interprets the sound of the conch shell with forceful rhythmic movements.
Heen Baba
Mayura Vannama (Peacock)
This vannama is in praise of the beautiful Sacred Peacock on which the god Kataragama rode.
SlCILLE KOTELAWALA
Uddekki Dance
The uddekki drum, legend says, was constructed according to the instructions of gcd Sakra and was played in the Palace of the Gods at the Queen's wedding, as well as at the birth of the Buddha and on the day of his enlightenment. During the dance, the dancers tighten the strings of the drums to obtain variation in pitch.
Heen Baba, Surasena
Naga Vannama (Cobra)
This vannama is based on the story which relates how the Buddha, in one of his previous births, was born a princely snake and was captured by a snake charmer. The dance depicts the movements of the cobra and its reactions to the snake charmer.
SlCILLE KOTELAWALA, SURASENA
Second Concert
Fourth Annual Asian Series
Complete Programs 3896
Samanala Vannama (Butterfly)
The dance depicts the movements of the yellow butterflies which are believed to dash them?selves against Samanala Kanda (Butterfly Mountain) or Sri Pada, the sacred peak with the foot print of the Buddha. It is said that these butterflies destroy themselves at the time the pilgrims come to pay their homage.
SURASENA
INTERMISSION
Bera Tharangaya (Drum Contest)
The Geta Bere is the most important drum in Kandyan dance. The cylinder of the drum is scooped out of a single block of wood. It has two drumheads--monkey skin on the right and ox skin on the left. The braces are made of deer skin and are passed through loops. These are tightened to provide the desired tension in tuning.
Premasiri, Sirisena, Geta Bere
Pantheru Dance (Tambourine Dance)
This dance praises the tambourine as a heavenly instrument used by the gods.
Heen Baba
Ukkussa Vannama (Eagle)
The eagle dives through the air in search of food.
SURASENA
Udhara Vannama (Majestic)
A proud king walks about majestically adorned with regal ornaments, followed by his retinue of foot soldiers and musicians. The people pay homage to him.
SlCILLE KOTELAWALA
Thuranga Vannama (Horse)
Prince Siddhartha, on his horse, jumps across the river Ganges and rides away to attain buddhahood, leaving his family behind.
Heen Baba
Drum Improvisation
The Davula and the Thammattama drums arc used in all Buddhist temple ceremonies and when used together are known as the Hevisi drums. They are also played on other ceremonial occasions. The Davula is played with a stick on one side and the bare hand on the other. The Thammattama is played with two sticks looped at the end.
Premasiri, Davula
Sirisena, Thammattama Ves
The Kohomba Kankariya, the most sacred ritual of Sri Lanka, includes many different cere?monies--offerings of rice, coconuts, fruit, flowers--as well as the procession of men carrying the weapons and insignia of the gods, climaxing in the dance ritual of the Ves dancers and their drum?mers. The part of the Kankariya presented here includes the prayers for purification (Asne Ycma) and the invocation of the gods.
Surasena, Heen Baba, Premasiri, Sirisena
The tour of Heen Baba and His Dance and Drum Ensemble is sponsored by the Performing Arts Program of the Asia Society under a grant from the High Winds Fund.
Special Added Attraction Hill Auditorium
National Chinese Opera Theatre . . . (2:30) Sunday, November 10
Remaining "Asian Series" Rackham Auditorium
Chhau, Masked Dance of Bengal . . . (8:30) Saturday, February 22 Qawwali Music from Pakistan.....(2:30) Sunday, March 16
UNIVERSITY MUSICAL SOCIETY
Burton Memorial Tower, Ann Arbor, Michigan Phone 6653717