UMS Concert Program, October 26, 1975: Dancers And Musicians Of The Burmese National Theater -- U Than Myint 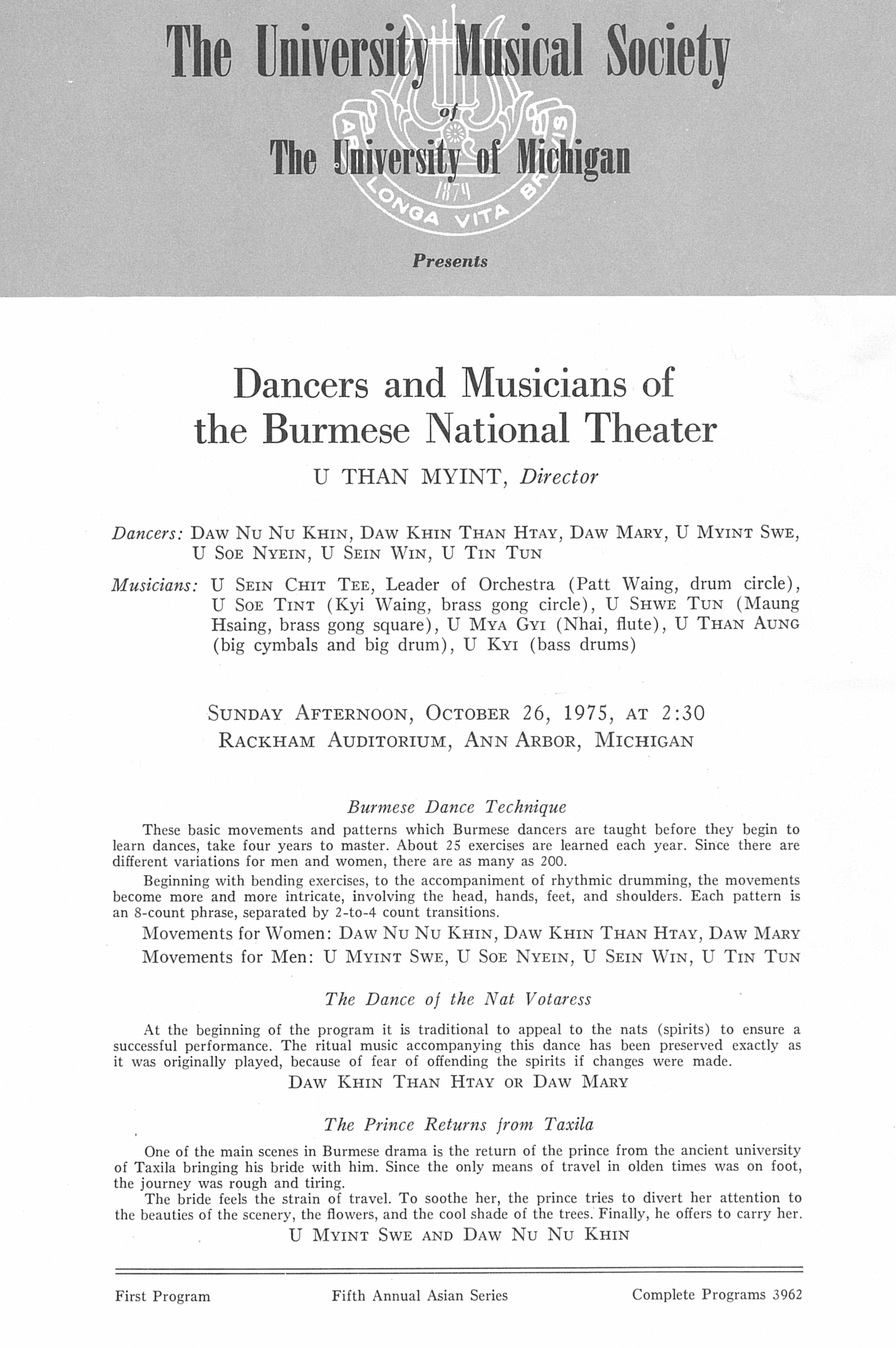 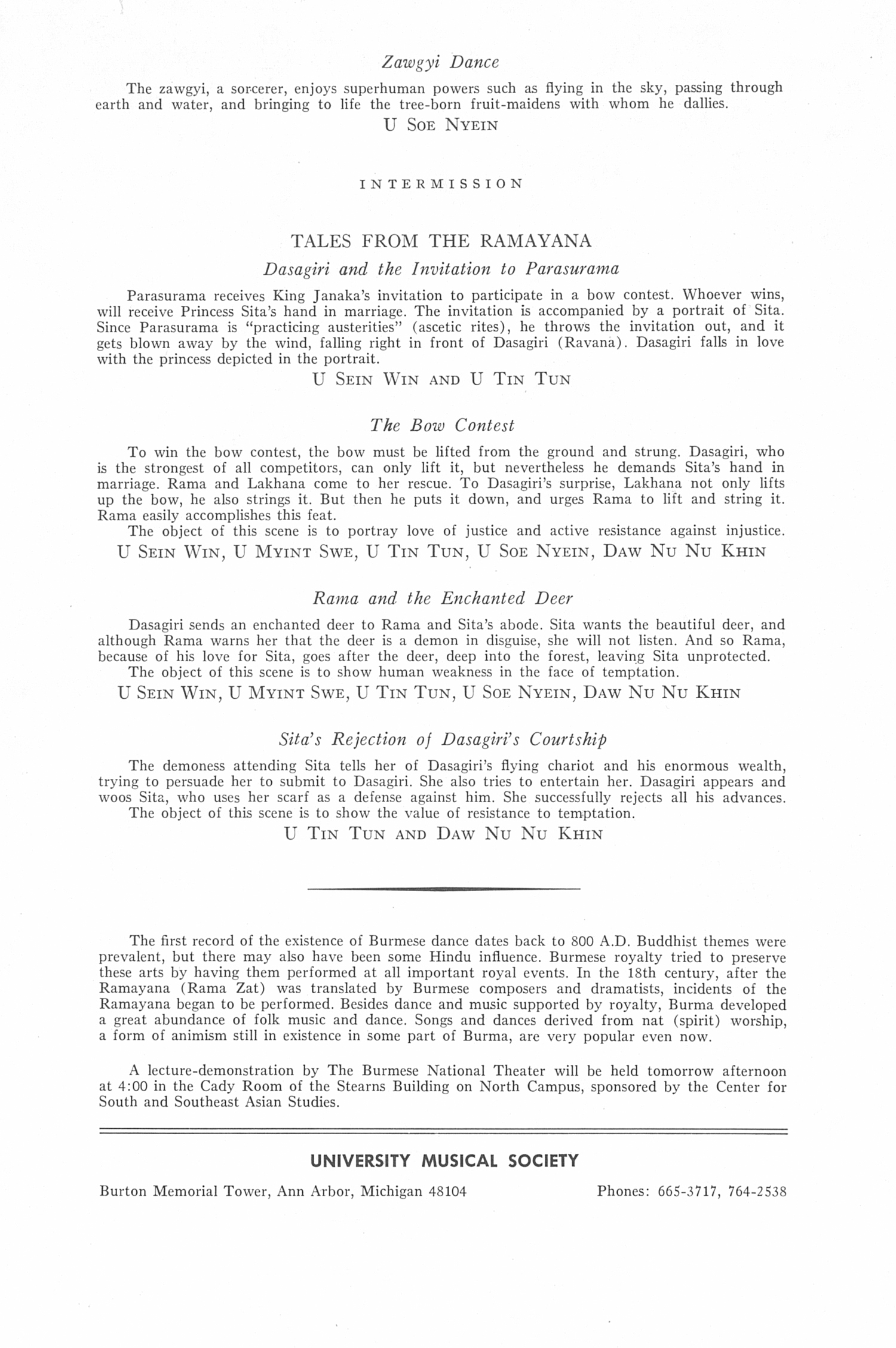 The University Musical Society
The University of Michigan
Presents
Dancers and Musicians of the Burmese National Theater
U THAN MYINT, Director
Dancers: Daw Nu Nu Khin, Daw Khin Than Htay, Daw Mary, U Myint Swe, U Soe Nyein, U Sein Win, U Tin Tun
Musicians: U Sein Chit Tee, Leader of Orchestra (Patt Waing, drum circle), U Soe Tint (Kyi Waing, brass gong circle), U Shwe Tun (Maung Hsaing, brass gong square), U Mya Gyi (Nhai, flute), U Than Aung (big cymbals and big drum), U Kyi (bass drums)
Sunday Afternoon, October 26, 1975, at 2:30 Rackham Auditorium, Ann Arbor, Michigan
Burmese Dance Technique
These basic movements and patterns which Burmese dancers are taught before they begin to learn dances, take four years to master. About 25 exercises are learned each year. Since there are different variations for men and women, there are as many as 200.
Beginning with bending exercises, to the accompaniment of rhythmic drumming, the movements become more and more intricate, involving the head, hands, feet, and shoulders. Each pattern is an 8count phrase, separated by 2to4 count transitions.
Movements for Women: Daw Nu Nu Khin, Daw Khin Than Htay, Daw Mary Movements for Men: U Myint Swe, U Soe Nyein, U Sein Win, U Tin Tun
The Dance of the Nat Votaress
At the beginning of the program it is traditional to appeal to the nats (spirits) to ensure a successful performance. The ritual music accompanying this dance has been preserved exactly as it was originally played, because of fear of offending the spirits if changes were made.
Daw Khin Than Htay or Daw Mary
The Prince Returns from Taxila
One of the main scenes in Burmese drama is the return of the prince from the ancient university of Taxila bringing his bride with him. Since the only means of travel in olden times was on foot, the journey was rough and tiring.
The bride feels the strain of travel. To soothe her, the prince tries to divert her attention to the beauties of the scenery, the flowers, and the cool shade of the trees. Finally, he offers to carry her.
U Myint Swe and Daw Nu Nu Khin
First Program Fifth Annual Asian Scries Complete Programs 3962
Zawgyi Dance
The zawgyi, a sorcerer, enjoys superhuman powers such as flying in the sky, passing through earth and water, and bringing to life the treeborn fruitmaidens with whom he dallies.
U SOE NYEIN
INTERMISSION
TALES FROM THE RAMAYANA
Dasagiri and the Invitation to Parasurama
Parasurama receives King Janaka's invitation to participate in a bow contest. Whoever wins, will receive Princess Sita's hand in marriage. The invitation is accompanied by a portrait of Sita. Since Parasurama is "practicing austerities" (ascetic rites), he throws the invitation out, and it gets blown away by the wind, falling right in front of Dasagiri (Ravana). Dasagiri falls in love with the princess depicted in the portrait.
U Sein Win and U Tin Tun
The Bow Contest
To win the bow contest, the bow must be lifted from the ground and strung. Dasagiri, who is the strongest of all competitors, can only lift it, but nevertheless he demands Sita's hand in marriage. Rama and Lakhana come to her rescue. To Dasagiri's surprise, Lakhana not only lifts up the bow, he also strings it. But then he puts it down, and urges Rama to lift and string it. Rama easily accomplishes this feat.
The object of this scene is to portray love of justice and active resistance against injustice.
U Sein Win, U Myint Swe, U Tin Tun, U Soe Nyein, Daw Nu Nu Khin
Rama and the Enchanted Deer
Dasagiri sends an enchanted deer to Rama and Sita's abode. Sita wants the beautiful deer, and although Rama warns her that the deer is a demon in disguise, she will not listen. And so Rama, because of his love for Sita, goes after the deer, deep into the forest, leaving Sita unprotected.
The object of this scene is to show human weakness in the face of temptation.
U Sein Win, U Myint Swe, U Tin Tun, U Soe Nyein, Daw Nu Nu Khin
Sita's Rejection oj Dasagiri's Courtship
The demoness attending Sita tells her of Dasagiri's flying chariot and his enormous wealth, trying to persuade her to submit to Dasagiri. She also tries to entertain her. Dasagiri appears and woos Sita, who uses her scarf as a defense against him. She successfully rejects all his advances.
The object of this scene is to show the value of resistance to temptation.
U Tin Tun and Daw Nu Nu Khin
The first record of the existence of Burmese dance dates back to 800 A.D. Buddhist themes were prevalent, but there may also have been some Hindu influence. Burmese royalty tried to preserve these arts by having them performed at all important royal events. In the 18th century, after the Ramayana (Rama Zat) was translated by Burmese composers and dramatists, incidents of the Ramayana began to be performed. Besides dance and music supported by royalty, Burma developed a great abundance of folk music and dance. Songs and dances derived from nat (spirit) worship, a form of animism still in existence in some part of Burma, are very popular even now.
A lecturedemonstration by The Burmese National Theater will be held tomorrow afternoon at 4:00 in the Cady Room of the Stearns Building on North Campus, sponsored by the Center for South and Southeast Asian Studies.
UNIVERSITY MUSICAL SOCIETY
Burton Memorial Tower, Ann Arbor, Michigan 48104 Phones: 6653717, 7642538