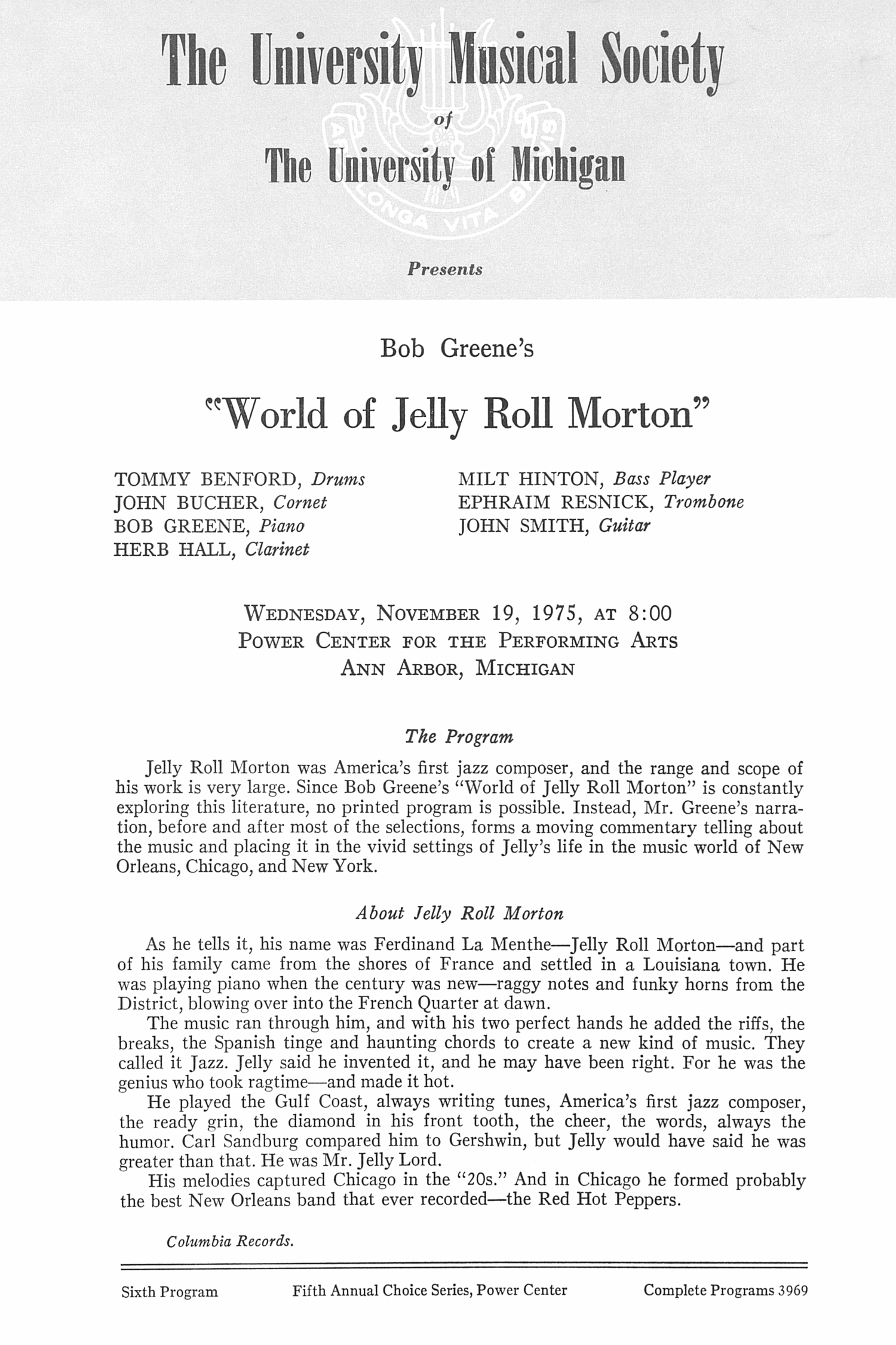 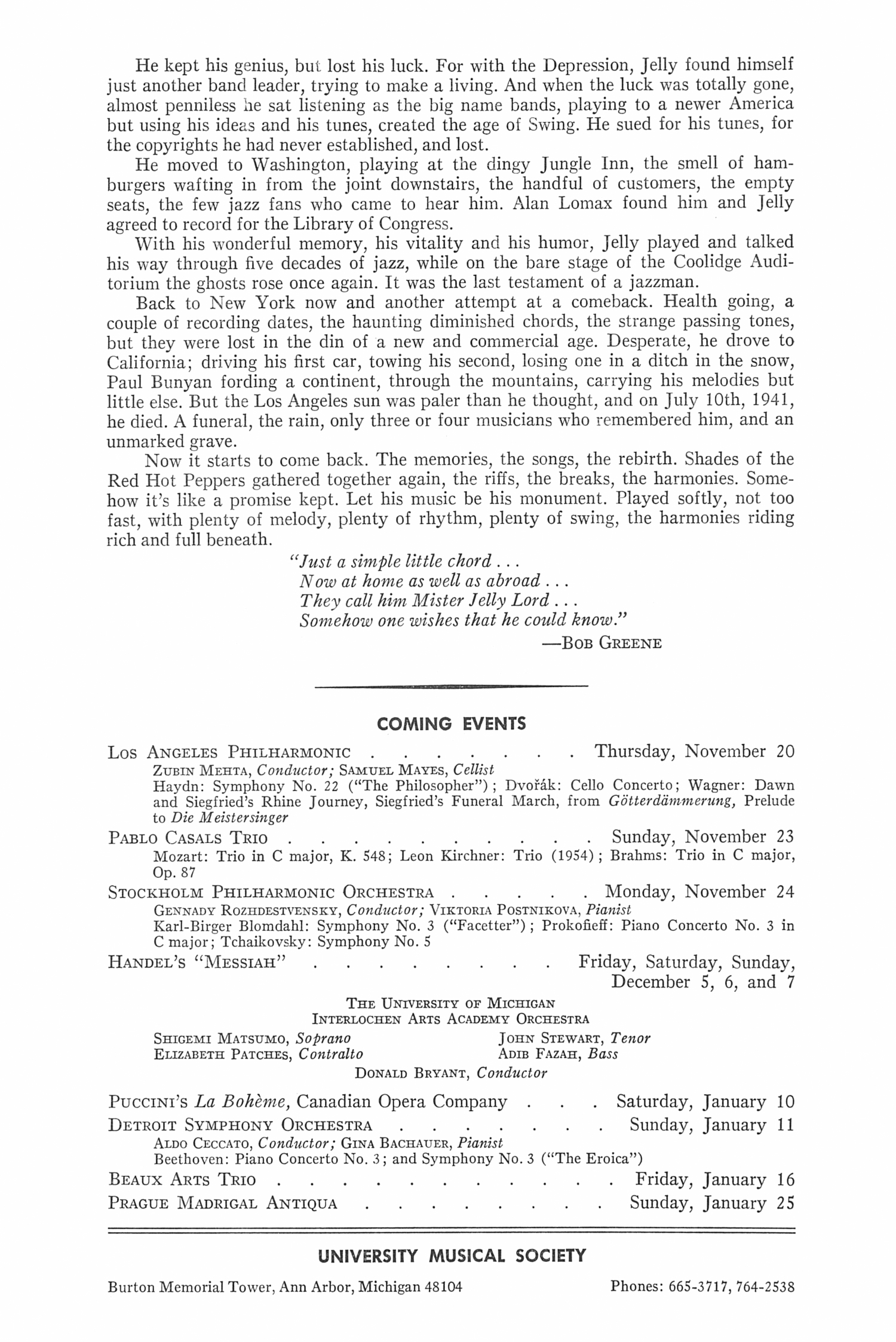 The University Musical Society
of
The University of Michigan
Presents
Bob Greene's
"World of Jelly Roll Morton"
TOMMY BENFORD, Drums JOHN BUCHER, Cornet BOB GREENE, Piano HERB HALL, Clarinet
MILT HINTON, Bass Player EPHRAIM RESNICK, Trombone JOHN SMITH, Guitar
Wednesday, November 19, 1975, at 8:00
Power Center for the Performing Arts
Ann Arbor, Michigan
The Program
Jelly Roll Morton was America's first jazz composer, and the range and scope of his work is very large. Since Bob Greene's "World of Jelly Roll Morton" is constantly exploring this literature, no printed program is possible. Instead, Mr. Greene's narra?tion, before and after most of the selections, forms a moving commentary telling about the music and placing it in the vivid settings of Jelly's life in the music world of New Orleans, Chicago, and New York.
About Jelly Roll Morton
As he tells it, his name was Ferdinand La Menthe--Jelly Roll Morton--and part of his family came from the shores of France and settled in a Louisiana town. He was playing piano when the century was new--raggy notes and funky horns from the District, blowing over into the French Quarter at dawn.
The music ran through him, and with his two perfect hands he added the riffs, the breaks, the Spanish tinge and haunting chords to create a new kind of music. They called it Jazz. Jelly said he invented it, and he may have been right. For he was the genius who took ragtime--and made it hot.
He played the Gulf Coast, always writing tunes, America's first jazz composer, the ready grin, the diamond in his front tooth, the cheer, the words, always the humor. Carl Sandburg compared him to Gershwin, but Jelly would have said he was greater than that. He was Mr. Jelly Lord.
His melodies captured Chicago in the "20s." And in Chicago he formed probably the best New Orleans band that ever recorded--the Red Hot Peppers.
Columbia Records.
Sixth Program
Fifth Annual Choice Series, Power Center
Complete Programs 3969
He kept his genius, bui lost his luck. For with the Depression, Jelly found himself just another band leader, trying to make a living. And when the luck was totally gone, almost penniless he sat listening as the big name bands, playing to a newer America but using his ideas and his tunes, created the age of Swing. He sued for his tunes, for the copyrights he had never established, and lost.
He moved to Washington, playing at the dingy Jungle Inn, the smell of ham?burgers wafting in from the joint downstairs, the handful of customers, the empty seats, the few jazz fans who came to hear him. Alan Lomax found him and Jelly agreed to record for the Library of Congress.
With his wonderful memory, his vitality and his humor, Jelly played and talked his way through five decades of jazz, while on the bare stage of the Coolidge Audi?torium the ghosts rose once again. It was the last testament of a jazzman.
Back to New York now and another attempt at a comeback. Health going, a couple of recording dates, the haunting diminished chords, the strange passing tones, but they were lost in the din of a new and commercial age. Desperate, he drove to California; driving his first car, towing his second, losing one in a ditch in the snow, Paul Bunyan fording a continent, through the mountains, carrying his melodies but little else. But the Los Angeles sun was paler than he thought, and on July 10th, 1941, he died. A funeral, the rain, only three or four musicians who remembered him, and an unmarked grave.
Now it starts to come back. The memories, the songs, the rebirth. Shades of the Red Hot Peppers gathered together again, the riffs, the breaks, the harmonies. Some?how it's like a promise kept. Let his music be his monument. Played softly, not too fast, with plenty of melody, plenty of rhythm, plenty of swing, the harmonies riding rich and full beneath.
"Just a simple little chord . .. Now at home as well as abroad . . . They call him Mister Jelly Lord . . . Somehow one wishes that he could know."
--Bob Greene
COMING EVENTS
Los Angeles Philharmonic.......Thursday, November 20
Zubin Mehta, Conductor; Samuel Mayes, Cellist
Haydn: Symphony No. 22 ("The Philosopher"); Dvorak: Cello Concerto; Wagner: Dawn and Siegfried's Rhine Journey, Siegfried's Funeral March, from Gb'tterdammerung, Prelude to Die Meislersinger
Pablo Casals Trio..........Sunday, November 23
Mozart: Trio in C major, K. 548; Leon Kirchner: Trio (1954); Brahms: Trio in C major, Op. 87
Stockholm Philharmonic Orchestra.....Monday, November 24
GENNAOY Roziidestvensky, Conductor; Viktoria Postnikova, Pianist
KarlBirger Blomdahl: Symphony No. 3 ("Facetter"); Prokofieff: Piano Concerto No. 3 in
C major; Tchaikovsky: Symphony No. 5
Handel's "Messiah"........Friday, Saturday, Sunday,
December 5, 6, and 7 The University of Michigan Interlochen Arts Academy Orchestra
Shigemi Matsumo, Soprano John Stewart, Tenor
Elizabeth Patches, Contralto Adib Fazah, Bass
Donald Bryant, Conductor
Puccini's La Boheme, Canadian Opera Company . . . Saturday, January 10
Detroit Symphony Orchestra.......Sunday, January 11
Aldo Ceccato, Conductor; Gina Bachauer, Pianist
Beethoven: Piano Concerto No. 3; and Symphony No. 3 ("The Eroica")
Beaux Arts Trio...........Friday, January 16
Prague Madrigal Antiqua........Sunday, January 25
UNIVERSITY MUSICAL SOCIETY
Burton Memorial Tower, Ann Arbor, Michigan 48104 Phones: 66S3717, 7642538