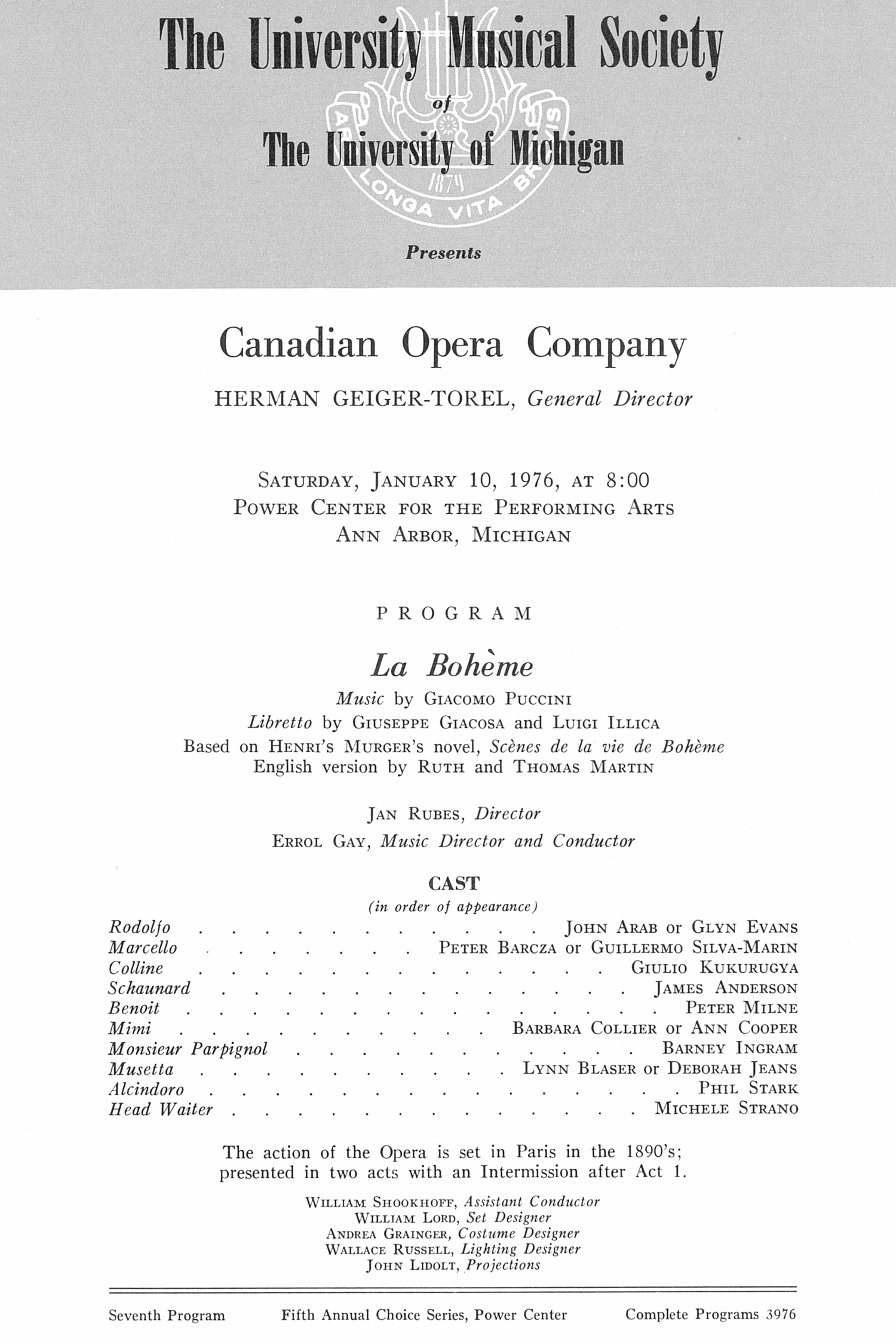 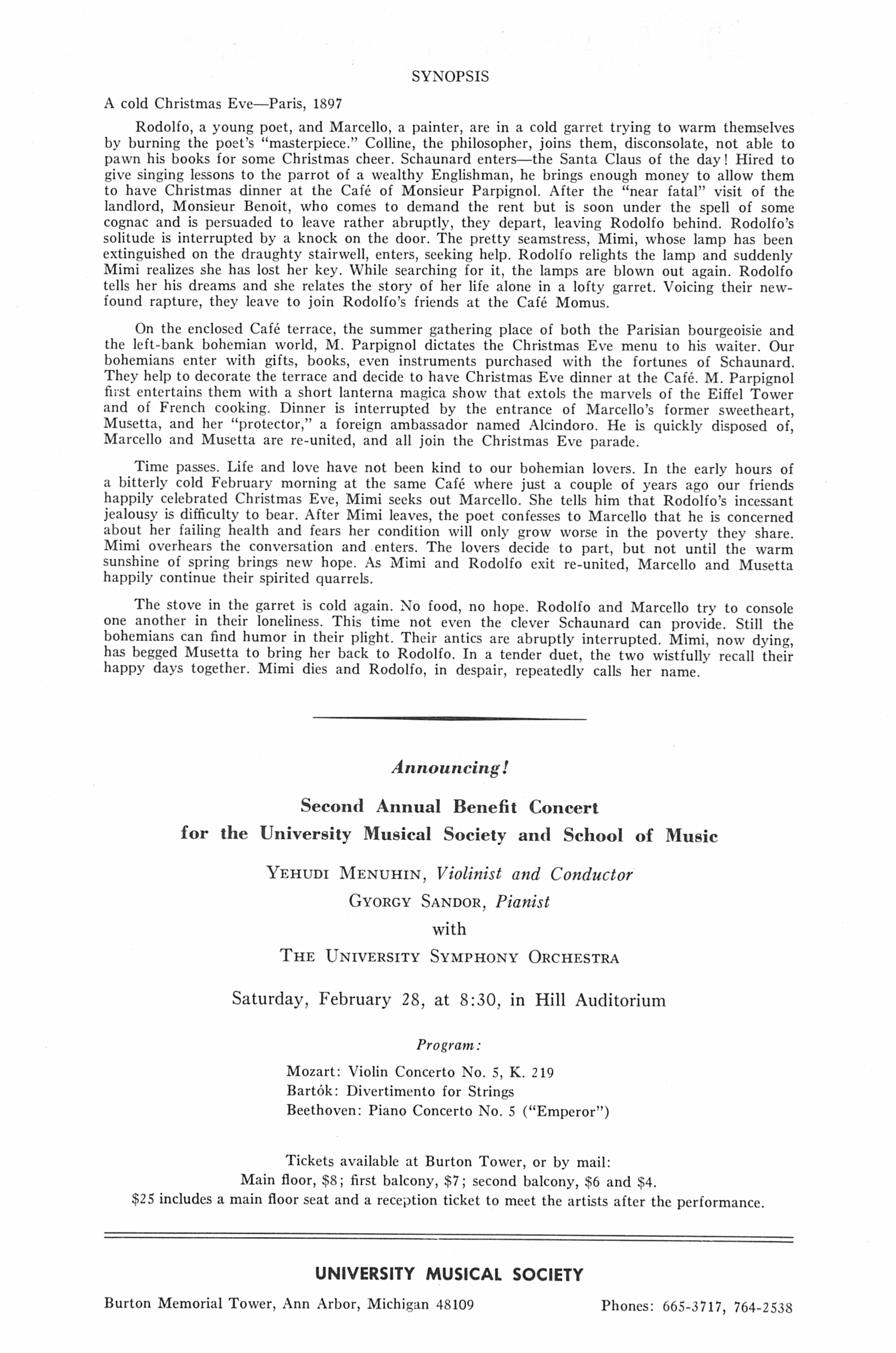 The University Musical Society
of
The University of Michigan
Presents
Canadian Opera Company
HERMAN GEIGERTOREL, General Director
Saturday, January 10, 1976, at 8:00
Power Center for the Performing Arts
Ann Arbor, Michigan
P R O G R A M
La Boheme
Music by Giacomo Puccini
Libretto by Giuseppe Giacosa and Luigi Illica
Based on Henri's Murger's novel, Scenes de la vie dc Boheme
English version by Ruth and Thomas Martin
Jan Rubes, Director Errol Gay, Music Director and Conductor
CAST
(in order of appearance)
Rodoljo...........John Arab or Glyn Evans
Marcello.......Peter Barcza or Guillermo SilvaMarin
Colline.............Giulio Kukurugya
Schaunard.............James Anderson
Benoit...............Peter Milne
Mimi..........Barbara Collier or Ann Cooper
Monsieur Parpignol...........Barney Ingram
Musetta..........Lynn Blaser or Deborah Jeans
Alcindoro...............Phil Stark
Head Waiter.............Michele Strano
The action of the Opera is set in Paris in the 1890's; presented in two acts with an Intermission after Act 1.
William Siiookiioff, Assistant Conductor
William Lord, Set Designer
Andrea Grainger, Costume Designer
Wallace Russell, Lighting Designer
John Lidolt, Projections
Seventh Program Fifth Annual Choice Series, Power Center Complete Programs 3976
SYNOPSIS
A cold Christmas Eve--Paris, 1897
Rodolfo, a young poet, and Marcello, a painter, are in a cold garret trying to warm themselves by burning the poet's "masterpiece." Colline, the philosopher, joins them, disconsolate, not able to pawn his books for some Christmas cheer. Schaunard enters--the Santa Claus of the day! Hired to give singing lessons to the parrot of a wealthy Englishman, he brings enough money to allow them to have Christmas dinner at the Cafe of Monsieur Parpignol. After the "near fatal" visit of the landlord, Monsieur Benoit, who comes to demand the rent but is soon under the spell of some cognac and is persuaded to leave rather abruptly, they depart, leaving Rodolfo behind. Rodolfo's solitude is interrupted by a knock on the door. The pretty seamstress, Mimi, whose lamp has been extinguished on the draughty stairwell, enters, seeking help. Rodolfo relights the lamp and suddenly Mimi realizes she has lost her key. While searching for it, the lamps are blown out again. Rodolfo tells her his dreams and she relates the story of her life alone in a lofty garret. Voicing their new?found rapture, they leave to join Rodolfo's friends at the Cafe Momus.
On the enclosed Cafe terrace, the summer gathering place of both the Parisian bourgeoisie and the leftbank bohemian world, M. Parpignol dictates the Christmas Eve menu to his waiter. Our bohcmians enter with gifts, books, even instruments purchased with the fortunes of Schaunard. They help to decorate the terrace and decide to have Christmas Eve dinner at the Cafe. M. Parpignol first entertains them with a short lanterna magica show that extols the marvels of the Eiffel Tower and of French cooking. Dinner is interrupted by the entrance of Marcello's former sweetheart, Musetta, and her "protector," a foreign ambassador named Alcindoro. He is quickly disposed of, Marcello and Musetta are reunited, and all join the Christmas Eve parade.
Time passes. Life and love have not been kind to our bohemian lovers. In the early hours of a bitterly cold February morning at the same Cafe where just a couple of years ago our friends happily celebrated Christmas Eve, Mimi seeks out Marcello. She tells him that Rodolfo's incessant jealousy is difficulty to bear. After Mimi leaves, the poet confesses to Marcello that he is concerned about her failing health and fears her condition will only grow worse in the poverty they share. Mimi overhears the conversation and enters. The lovers decide to part, but not until the warm sunshine of spring brings new hope. As Mimi and Rodolfo exit reunited, Marcello and Musetta happily continue their spirited quarrels.
The stove in the garret is cold again. Xo food, no hope. Rodolfo and Marcello try to console one another in their loneliness. This time not even the clever Schaunard can provide. Still the bohemians can find humor in their plight. Their antics are abruptly interrupted. Mimi, now dying, has begged Musetta to bring her back to Rodolfo. In a tender duet, the two wistfully recall their happy days together. Mimi dies and Rodolfo, in despair, repeatedly calls her name.
Announcing !
Second Annual Benefit Concert for the University Musical Society and School of Music
Yehudi Menuhin, Violinist and Conductor Gyorgy Sandor, Pianist
with The University Symphony Orchestra
Saturday, February 28, at 8:30, in Hill Auditorium
Program :
Mozart: Violin Concerto Xo. 5, K. 219
Bartok: Divertimento for Strings
Beethoven: Piano Concerto No. 5 ("Emperor")
Tickets available at Burton Tower, or by mail:
Main floor, 8; first balcony, $7; second balcony, $6 and $4.
$25 includes a main floor seat and a reception ticket to meet the artists after the performance.
UNIVERSITY MUSICAL SOCIETY
Burton Memorial Tower, Ann Arbor, Michigan 48109
Phones: 6653717, 7642538