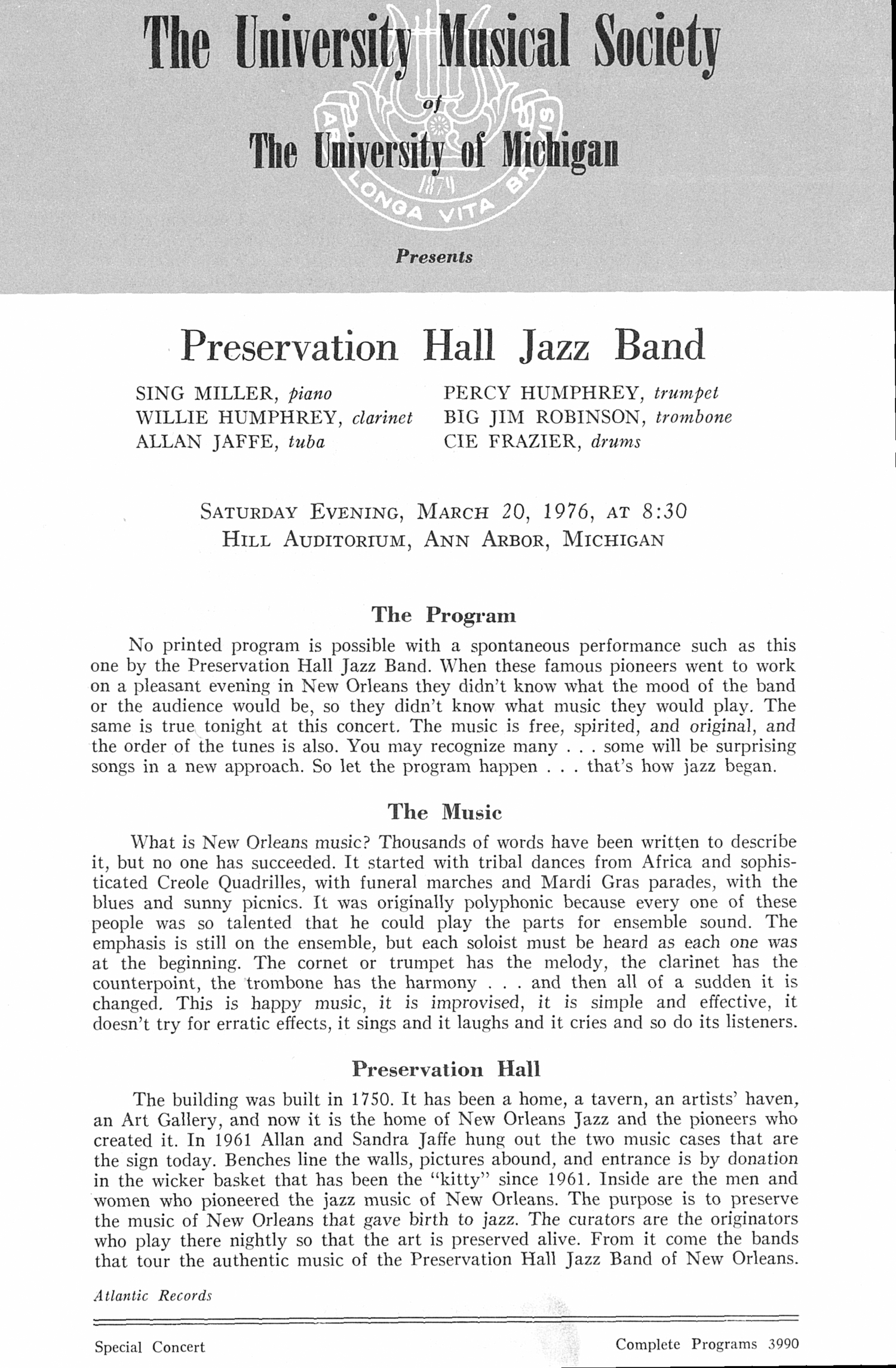 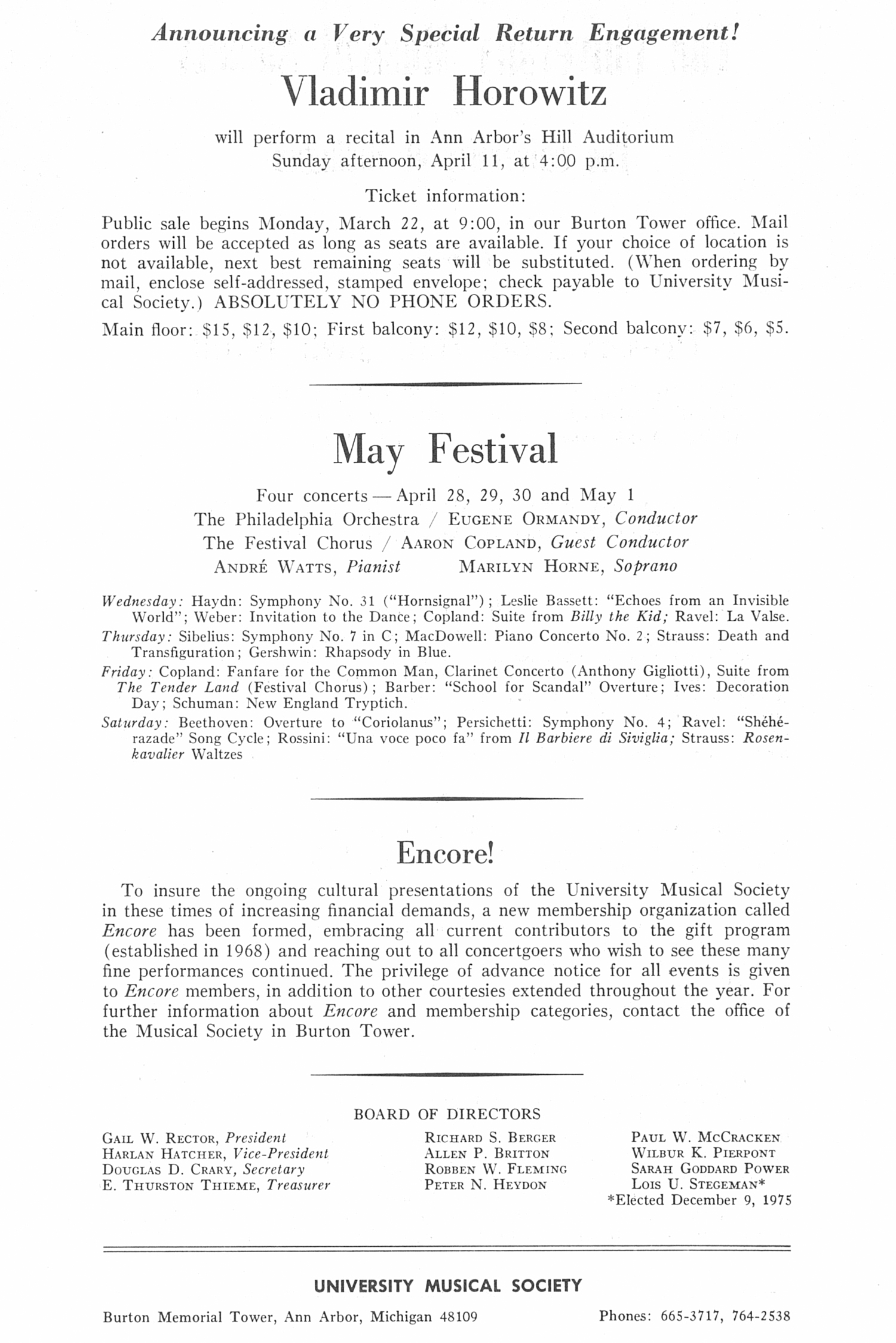 The University Musical Society
The University of Michigan
Presents
Preservation Hall Jazz Band
SING MILLER, piano PERCY HUMPHREY, trumpet
WILLIE HUMPHREY, clarinet BIG JIM ROBINSON, trombone ALLAN JAFFE, tuba CIE FRAZIER, drums
Saturday Evening, March 20, 1976, at 8:30 Hill Auditorium, Ann Arbor, Michigan
The Program
No printed program is possible with a spontaneous performance such as this one by the Preservation Hall Jazz Band. When these famous pioneers went to work on a pleasant evening in New Orleans they didn't know what the mood of the band or the audience would be, so they didn't know what music they would play. The same is true tonight at this concert. The music is free, spirited, and original, and the order of the tunes is also. You may recognize many . . . some will be surprising songs in a new approach. So let the program happen . . . that's how jazz began.
The Music
What is New Orleans music Thousands of words have been written to describe it, but no one has succeeded. It started with tribal dances from Africa and sophis?ticated Creole Quadrilles, with funeral marches and Mardi Gras parades, with the blues and sunny picnics. It was originally polyphonic because every one of these people was so talented that he could play the parts for ensemble sound. The emphasis is still on the ensemble, but each soloist must be heard as each one was at the beginning. The cornet or trumpet has the melody, the clarinet has the counterpoint, the trombone has the harmony . . . and then all of a sudden it is changed. This is happy music, it is improvised, it is simple and effective, it doesn't try for erratic effects, it sings and it laughs and it cries and so do its listeners.
Preservation Hall
The building was built in 17S0. It has been a home, a tavern, an artists' haven, an Art Gallery, and now it is the home of New Orleans Jazz and the pioneers who created it. In 1961 Allan and Sandra Jaffe hung out the two music cases that are the sign today. Benches line the walls, pictures abound, and entrance is by donation in the wicker basket that has been the "kitty" since 1961. Inside are the men and women who pioneered the jazz music of New Orleans. The purpose is to preserve the music of New Orleans that gave birth to jazz. The curators are the originators who play there nightly so that the art is preserved alive. From it come the bands that tour the authentic music of the Preservation Hall Jazz Band of New Orleans.
Atlantic Records
Special Concert Complete Programs 3990
Announcing a Very Special Return Engagement!
Vladimir Horowitz
will perform a recital in Ann Arbor's Hill Auditorium Sunday afternoon, April 11, at 4:00 p.m.
Ticket information:
Public sale begins Monday, March 22, at 9:00, in our Burton Tower office. Mail orders will be accepted as long as seats are available. If your choice of location is not available, next best remaining seats will be substituted. (When ordering by mail, enclose selfaddressed, stamped envelope: check payable to University Musi?cal Society.) ABSOLUTELY NO PHONE ORDERS.
Main floor: SI5, $12, $10: First balcony: $12, $10, $8: Second balcony: $7, $6, S.
May Festival
Four concerts -April 28, 29, 30 and May 1
The Philadelphia Orchestra Eugene Ormandy, Conductor
The Festival Chorus Aaron Copland, Guest Conductor
Andre Watts, Pianist Marilyn Horne, Soprano
Wednesday: Haydn: Symphony No. 31 ("HornsiRnal") ; Leslie Bassctt: "Echoes from an Invisible
World"; Weber: Invitation to the Dance: Copland: Suite from Billy the Kid; Ravel: La Valse. Thursday: Sibelius: Symphony No. 7 in C; MacDowcll: Piano Concerto No. 2; Strauss: Death and
Transfiguration; Gershwin: Rhapsody in Blue.
Friday: Copland: Fanfare for the Common Man, Clarinet Concerto (Anthony Gijiliotti), Suite from The Tender Land (Festival Chorus); Barber: "School for Scandal" Overture; Ives: Decoration
Day; Schuman: New England Tryptich. Saturday: Beethoven: Overture to "Coriolanus"; Persichetti: Symphony No. 4; Ravel: "Shehe
razade" Song Cycle; Rossini: "Una voce poco fa" from Barbiere di Siviglia; Strauss: Rosen
kavalier Waltzes
Encore!
To insure the ongoing cultural presentations of the University Musical Society in these times of increasing financial demands, a new membership organization called Encore has been formed, embracing all current contributors to the gift program (established in 1968) and reaching out to all concertgoers who wish to see these many fine performances continued. The privilege of advance notice for all events is given to Encore members, in addition to other courtesies extended throughout the year. For further information about Encore and membership categories, contact the office of the Musical Society in Burton Tower.
BOARD OF DIRECTORS
Gail W. Rector, President Harlan Hatcher, VicePresident Douglas D. Crary, Secretary E. Thurston Tiiif.me, Treasurer
Riciiard S. Berc.er Allen P. Britton Robben W. Fleming Peter N. Hkydon
Paul VV. McCracken Wilbur K. Pierpont Sarah Goddard Power Lois U. Steoeman ?Elected December 9, 1975
UNIVERSITY MUSICAL SOCIETY
Burton Memorial Tower, Ann Arbor, Michigan 48109 Phones: 6653717, 7642538