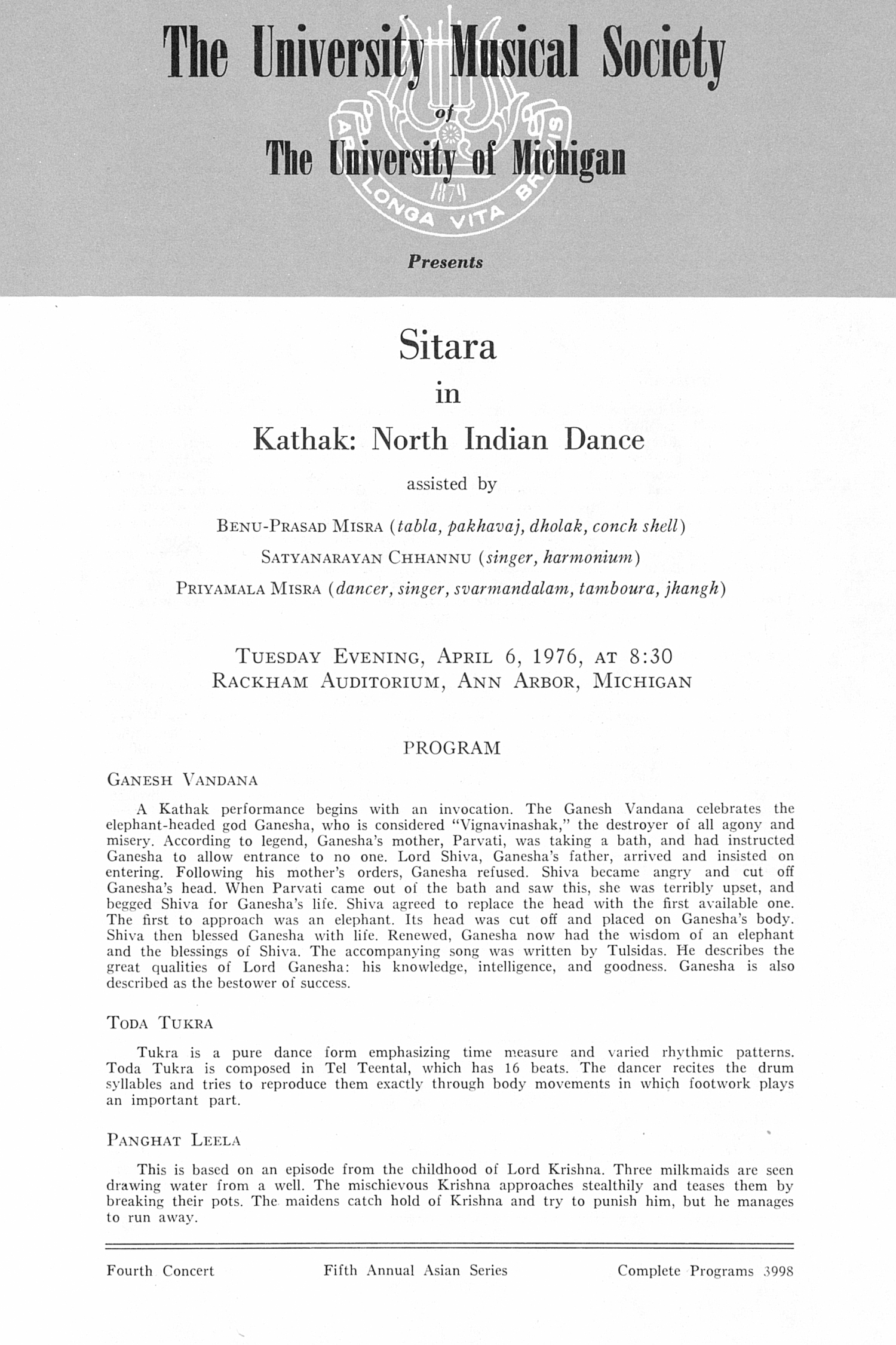 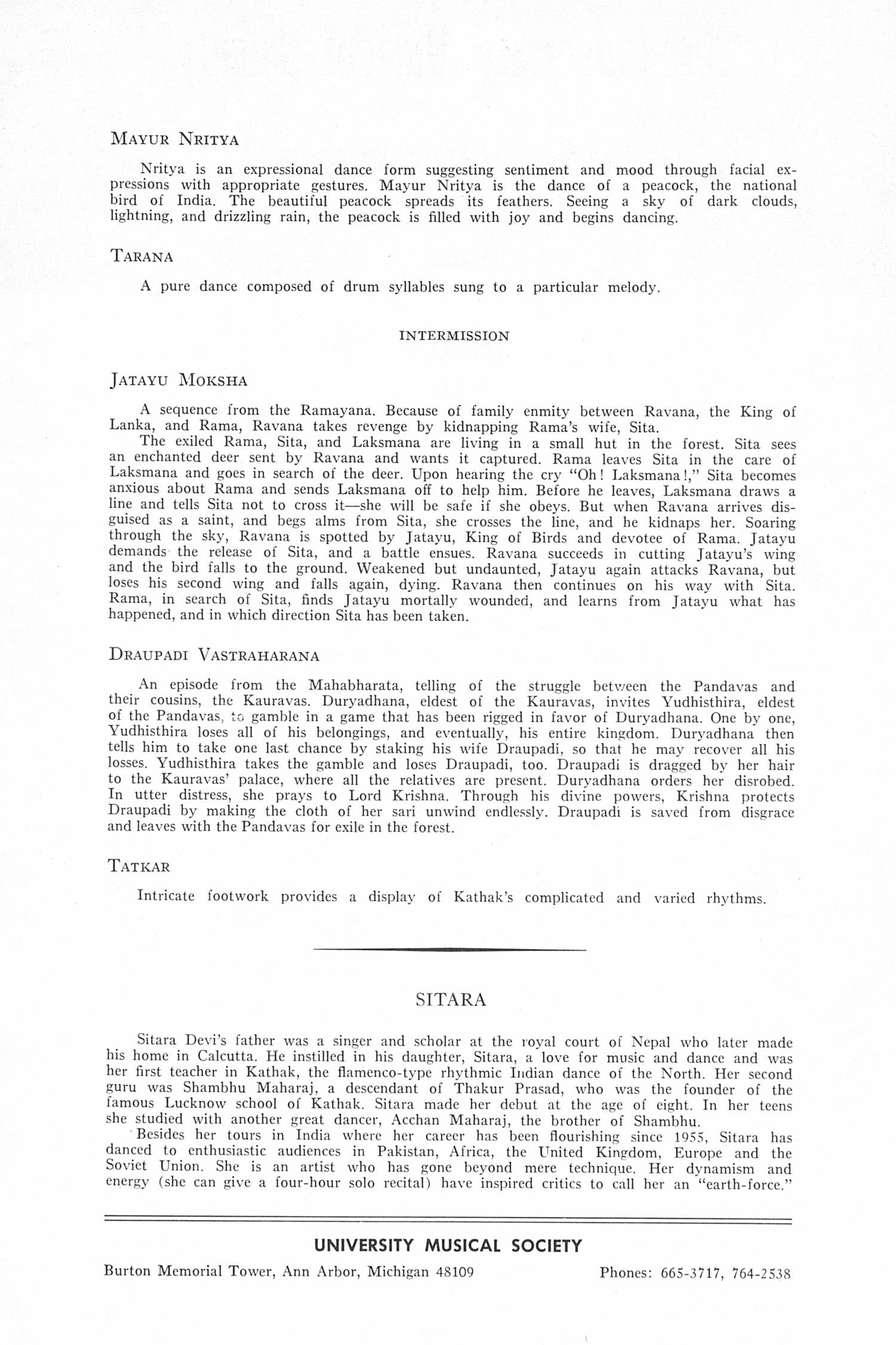 The Universit
mi ?'
The University P
Musical Society
y Pi
Presents
Sitara
in Kathak: North Indian Dance
assisted by
BenuPrasad Misra (tabla, pakiavaj, dholak, conch shell)
Satyanarayan Chhannu (singer, harmonium) Priyamala Misra (dancer, singer, svarmandalam, tamboura, jhangh)
Tuesday Evening, April 6, 1976, at 8:30 Rackham Auditorium, Ann Arbor, Michigan
PROGRAM
Ganesh Vandana
A Kathak performance begins with an invocation. The Ganesh Vandana celebrates the elephantheaded god Ganesha, who is considered "Vignavinashak," the destroyer of all agony and misery. According to legend, Ganesha's mother, Parvati, was taking a bath, and had instructed Ganesha to allow entrance to no one. Lord Shiva, Ganesha's father, arrived and insisted on entering. Following his mother's orders, Ganesha refused. Shiva became angry and cut off Ganesha's head. When Parvati came out of the bath and saw this, she was terribly upset, and begged Shiva for Ganesha's life. Shiva agreed to replace the head with the first available one. The first to approach was an elephant. Its head was cut off and placed on Ganesha's body. Shiva then blessed (lanesha with life. Renewed, Ganesha now had the wisdom of an elephant and the blessings of Shiva. The accompanying song was written by Tulsidas. He describes the great qualities of Lord Ganesha: his knowledge, intelligence, and goodness. Ganesha is also described as the bestower of success.
ToDA TUKRA
Tukra is a pure dance form emphasizing time measure and aried rhythmic patterns. Toda Tukra is composed in Tel Teental, which has 16 beats. The dancer recites the drum syllables and tries to reproduce them exactly through body movements in which footwork plays an important part.
Panghat Leela
This is based on an episode from the childhood of Lord Krishna. Three milkmaids are seen drawing water from a well. The mischievous Krishna approaches stealthily and teases them by breaking their pots. The maidens catch hold of Krishna and try to punish him, but he manages to run away.
Fourth Concert Fifth Annual Asian Series Complete Programs .W8
Mayur Nritya
Nritya is an expressional dance form suggesting sentiment and mood through facial ex?pressions with appropriate gestures. Mayur Nritya is the dance of a peacock, the national bird of India. The beautiful peacock spreads its feathers. Seeing a sky of dark clouds, lightning, and drizzling rain, the peacock is filled with joy and begins dancing.
Tarana
A pure dance composed of drum syllables sung to a particular melody.
intermission
Jatayu Moksha
A sequence from the Ramayana. Because of family enmity between Ravana, the King of Lanka, and Rama, Ravana takes revenge by kidnapping Rama's wife, Sita.
The exiled Rama, Sita, and Laksmana are living in a small hut in the forest. Sita sees an enchanted deer sent by Ravana and wants it captured. Rama leaves Sita in the care of Laksmana and goes in search of the deer. Upon hearing the cry "Oh! Laksmana I," Sita becomes anxious about Rama and sends Laksmana off to help him. Before he leaves, Laksmana draws a line and tells Sita not to cross it--she will be safe if she obeys. But when Ravana arrives dis?guised as a saint, and begs alms from Sita, she crosses the line, and he kidnaps her. Soaring through the sky, Ravana is spotted by Jatayu, King of Birds and devotee of Rama. Jatayu demands the release of Sita, and a battle ensues. Ravana succeeds in cutting Jatayu's wing and the bird falls to the ground. Weakened but undaunted, Jatayu again attacks Ravana, but loses his second wing and falls again, dying. Ravana then continues on his way with Sita. Rama, in search of Sita, finds Jatayu mortally wounded, and learns from Jatayu what has happened, and in which direction Sita has been taken.
Draupadi Vastraharana
An episode from the Mahabharata, telling of the struggle between the Pandavas and their cousins, the Kauravas. Duryadhana, eldest of the Kauravas, invites Yudhisthira, eldest of the Pandavas, to gamble in a game that has been rigged in favor of Duryadhana. One by one, Yudhisthira loses all of his belongings, and eventually, his entire kingdom. Duryadhana then tells him to take one last chance by staking his wife Draupadi, so that he may recover all his losses. Yudhisthira takes the gamble and loses Draupadi, too. Draupadi is dragged by her hair to the Kauravas' palace, where all the relatives are present. Duryadhana orders her disrobed. In utter distress, she prays to Lord Krishna. Through his divine powers, Krishna protects Draupadi by making the cloth of her sari unwind endlessly. Draupadi is saved from disgrace and leaves with the Pandavas for exile in the forest.
Tatkar
Intricate footwork provides a display of Kathak's complicated and varied rhythms.
SITARA
Sitara Devi's father was a singer and scholar at the royal court of Nepal who later made his home in Calcutta. He instilled in his daughter, Sitara, a love for music and dance and was her first teacher in Kathak, the flamencotype rhythmic Indian dance of the North. Her second guru was Shambhu Maharaj. a descendant of Thakur Prasad, who was the founder of the famous Lucknow school of Kathak. Sitara made her debut at the age of eight. In her teens she studied with another great dancer, Acchan Maharaj, the brother of Shambhu.
Besides her tours in India where her career has been flourishing since 1955, Sitara has danced to enthusiastic audiences in Pakistan, Africa, the United Kingdom, F.urope and the Soviet Union. She is an artist who has gone beyond mere technique. Her dynamism and energy (she can give a fourhour solo recital) have inspired critics to call her an "earthforce."
UNIVERSITY MUSICAL SOCIETY
Burton Memorial Tower, Ann Arbor, Michigan 48109 Phones: 6653717, 7642538