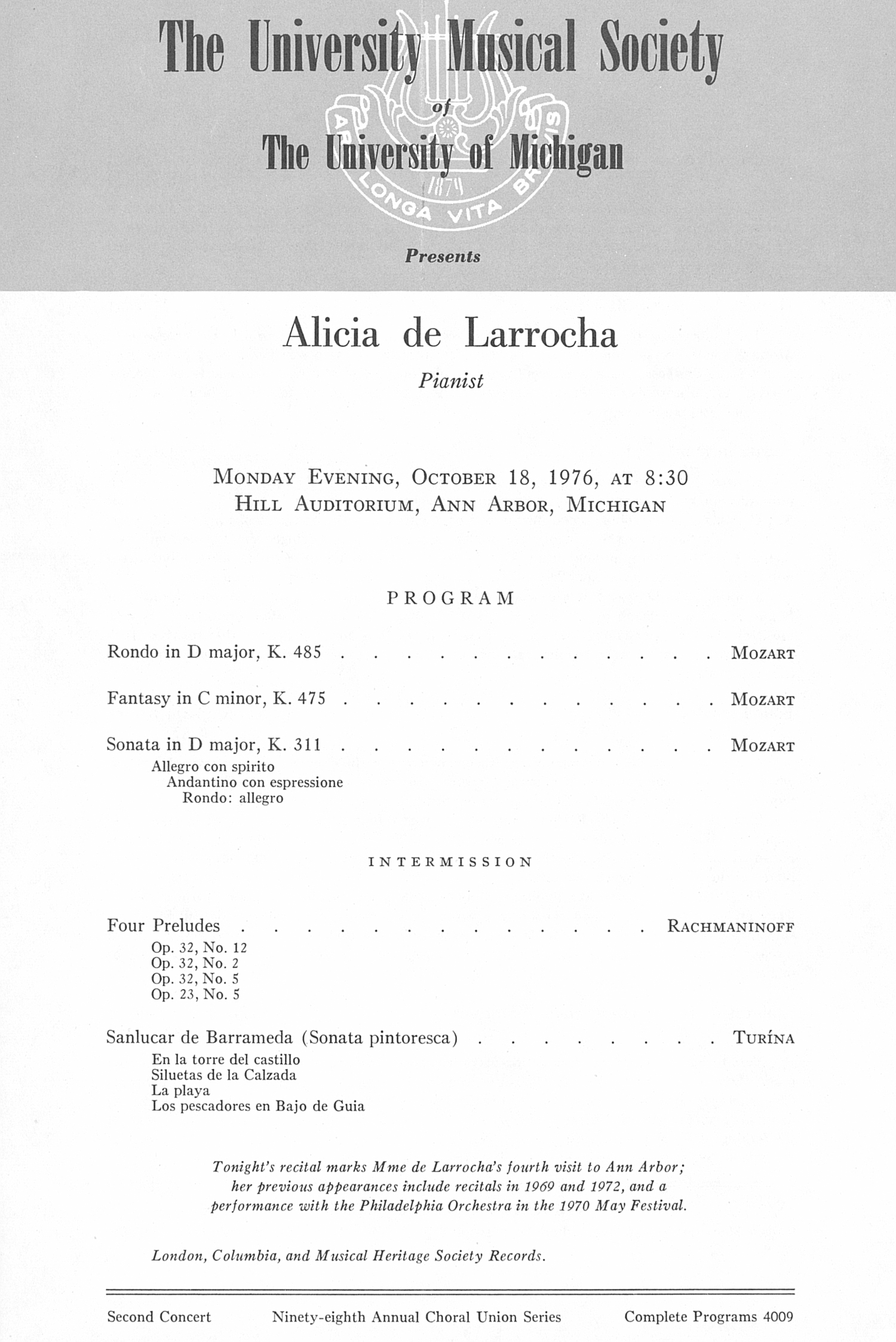 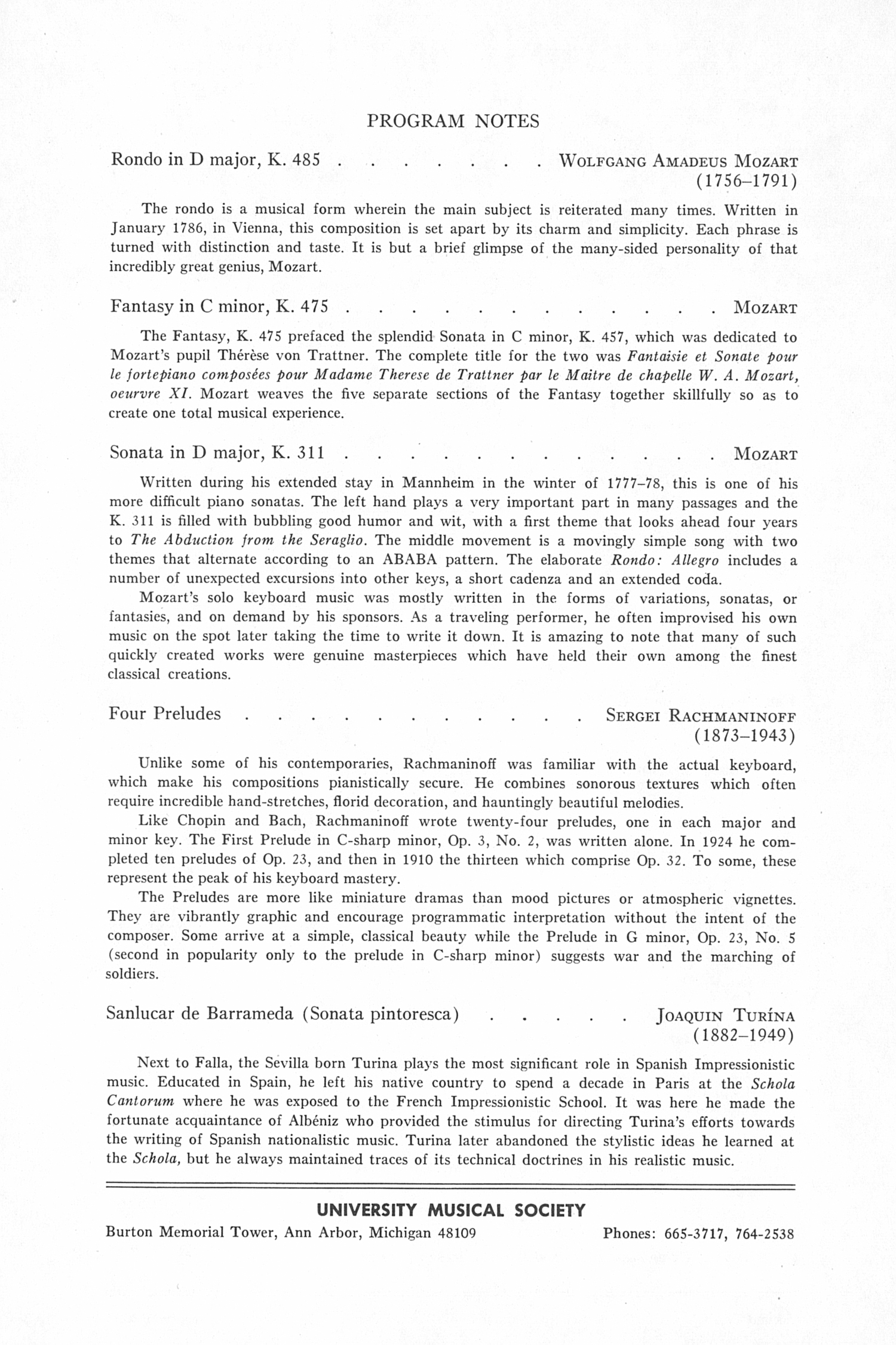 The University Musical Society
of
The University of Michigan
Presents
Alicia de Larrocha
Pianist
Monday Evening, October 18, 1976, at 8:30 Hill Auditorium, Ann Arbor, Michigan
PROGRAM
Rondo in D major, K. 485............Mozart
Fantasy in C minor, K. 475............Mozart
Sonata in D major, K. 311............Mozart
Allegro con spirito
Andantino con cspressione Rondo: allegro
INTERMISSION
Four Preludes.............Rachmaninoff
Op. 32, No. 12 Op. 32, No. 2 Op. 32, No. S
Op. 23, No. S
Sanlucar de Barrameda (Sonata pintoresca)........Turina
En la torre del Castillo
Siluctas de la Calzada
La playa
Los Pescadores en Bajo de Guia
Tonight's recital marks Mme de Larrocha's fourth visit to Ann Arbor;
her previous appearances include recitals in 1969 and 1972, and a performance with the Philadelphia Orchestra in the 1970 May Festival.
London, Columbia, and Musical Heritage Society Records. Second Concert Ninetyeighth Annual Choral Union Series Complete Programs 4009
PROGRAM NOTES
Rondo in D major, K. 485.......Wolfgang Amadeus Mozart
(17561791)
The rondo is a musical form wherein the main subject is reiterated many times. Written in January 1786, in Vienna, this composition is set apart by its charm and simplicity. Each phrase is turned with distinction and taste. It is but a brief glimpse of the manysided personality of that incredibly great genius, Mozart.
Fantasy in C minor, K. 475............Mozart
The Fantasy, K. 475 prefaced the splendid Sonata in C minor, K. 457, which was dedicated to Mozart's pupil Therese von Trattner. The complete title for the two was Fantaisie el Sonate pour le fortepiano composies pour Madame Therese de Trattner par le Mailre de chapclle W. A. Mozart, oeurvre XI. Mozart weaves the five separate sections of the Fantasy together skillfully so as to create one total musical experience.
Sonata in D major, K. 311............Mozart
Written during his extended stay in Mannheim in the winter of 177778, this is one of his more difficult piano sonatas. The left hand plays a very important part in many passages and the K. 311 is filled with bubbling good humor and wit, with a first theme that looks ahead four years to The Abduction from the Seraglio. The middle movement is a movingly simple song with two themes that alternate according to an ABABA pattern. The elaborate Rondo: Allegro includes a number of unexpected excursions into other keys, a short cadenza and an extended coda.
Mozart's solo keyboard music was mostly written in the forms of variations, sonatas, or fantasies, and on demand by his sponsors. As a traveling performer, he often improvised his own music on the spot later taking the time to write it down. It is amazing to note that many of such quickly created works were genuine masterpieces which have held their own among the finest classical creations.
Four Preludes...........Sergei Rachmaninoff
(18731943)
Unlike some of his contemporaries, Rachmaninoff was familiar with the actual keyboard, which make his compositions pianistically secure. He combines sonorous textures which often require incredible handstretches, florid decoration, and hauntingly beautiful melodies.
Like Chopin and Bach, Rachmaninoff wrote twentyfour preludes, one in each major and minor key. The First Prelude in Csharp minor, Op. 3, No. 2, was written alone. In 1924 he com?pleted ten preludes of Op. 23, and then in 1910 the thirteen which comprise Op. 32. To some, these represent the peak of his keyboard mastery.
The Preludes are more like miniature dramas than mood pictures or atmospheric vignettes. They are vibrantly graphic and encourage programmatic interpretation without the intent of the composer. Some arrive at a simple, classical beauty while the Prelude in G minor, Op. 23, No. 5 (second in popularity only to the prelude in Csharp minor) suggests war and the marching of soldiers.
Sanlucar de Barrameda (Sonata pintoresca).....Joaquin Turina
(18821949)
Next to Falla, the Sevilla born Turina plays the most significant role in Spanish Impressionistic music. Educated in Spain, he left his native country to spend a decade in Paris at the Schola Canlorum where he was exposed to the French Impressionistic School. It was here he made the fortunate acquaintance of Albeniz who provided the stimulus for directing Turina's efforts towards the writing of Spanish nationalistic music. Turina later abandoned the stylistic ideas he learned at the Schola, hut he always maintained traces of its technical doctrines in his realistic music.
UNIVERSITY MUSICAL SOCIETY
Burton Memorial Tower, Ann Arbor, Michigan 48109 Phones: 6653717, 7642538