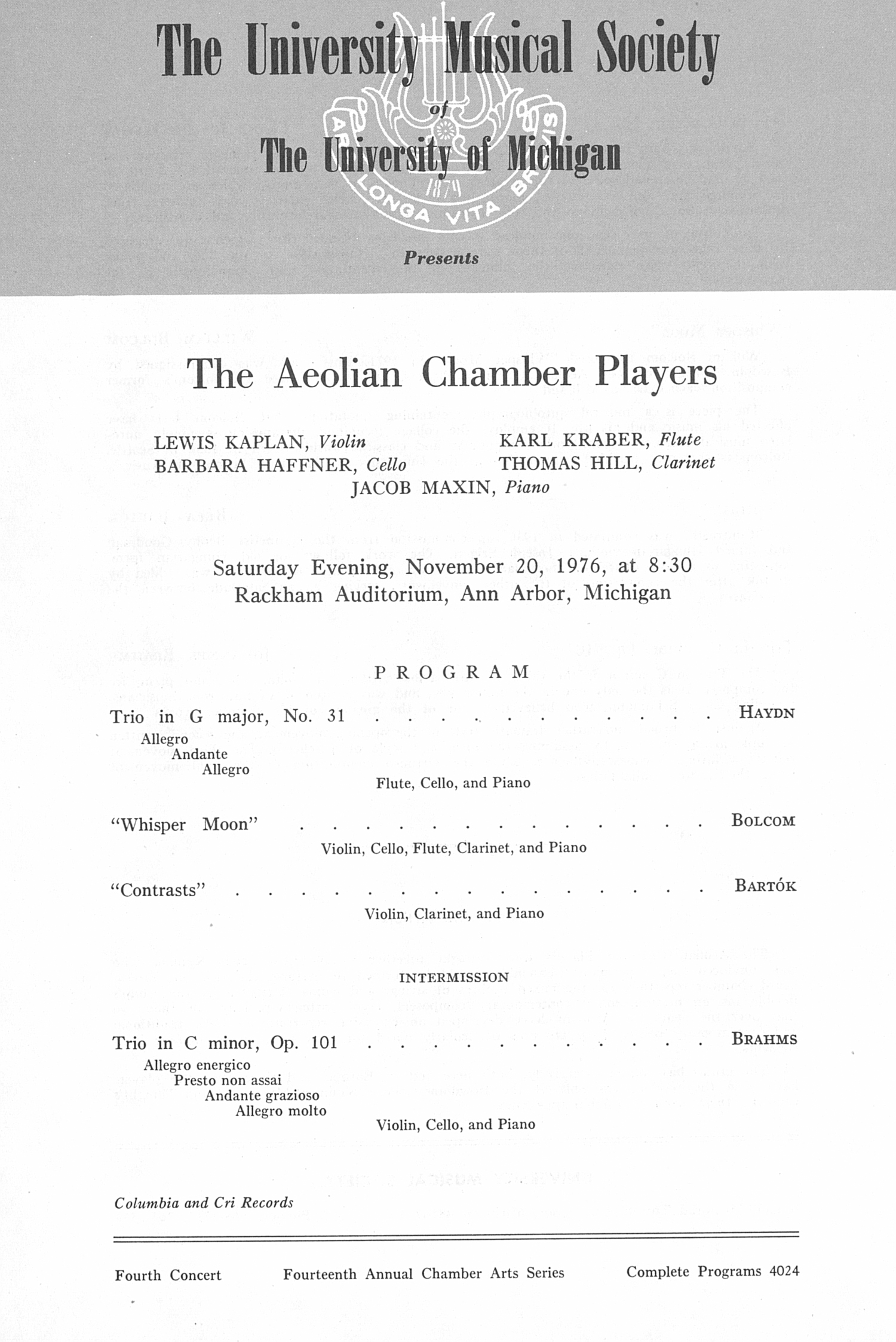 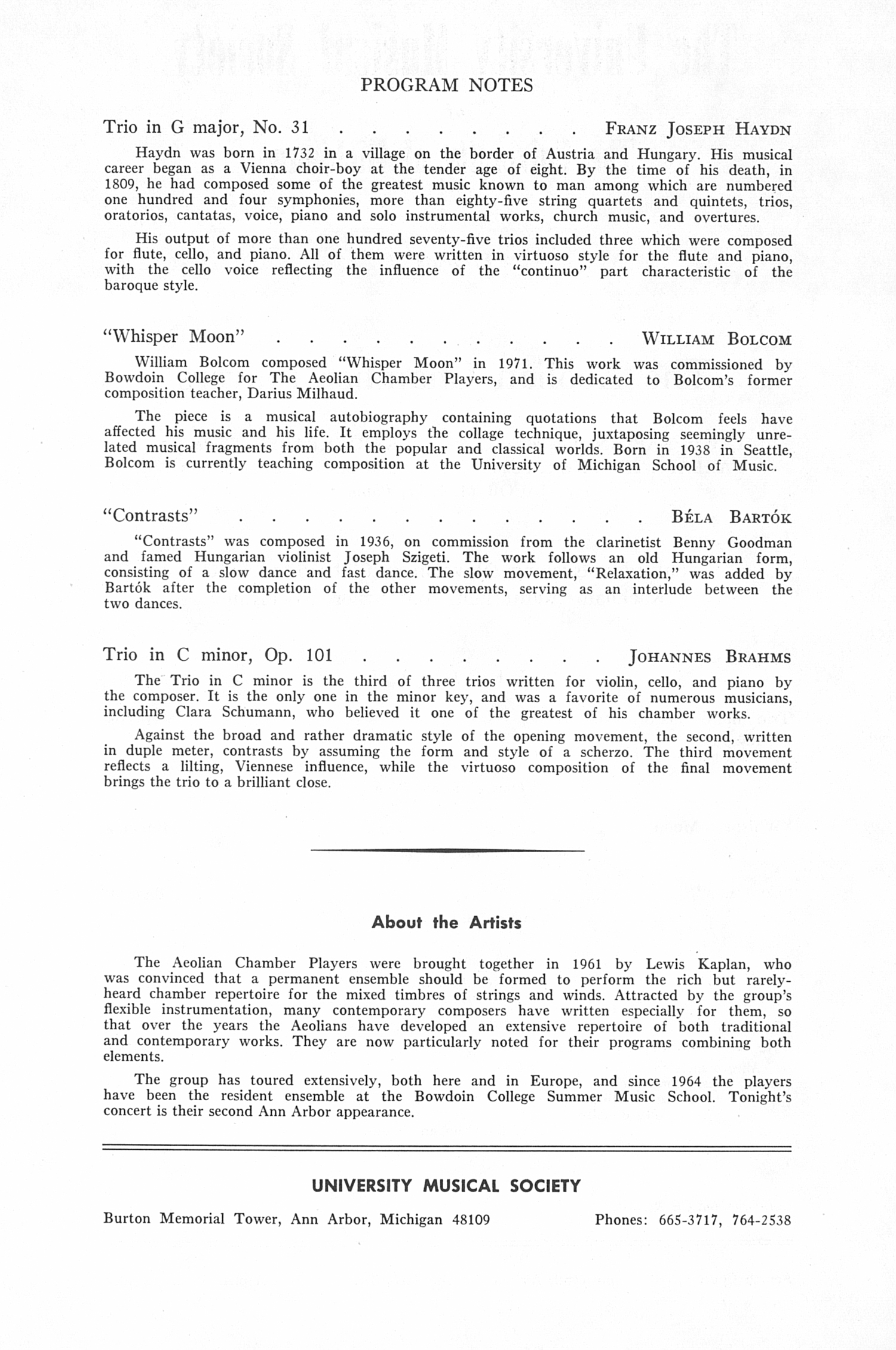 The University Musical Society
The University of Michigan
The Aeolian Chamber Players
LEWIS KAPLAN, Violin KARL KRABER, Flute
BARBARA HAFFNER, Cello THOMAS HILL, Clarinet
JACOB MAXIN, Piano
Saturday Evening, November 20, 1976, at 8:30 Rackham Auditorium, Ann Arbor, Michigan
PROGRAM
Trio in G major, No. 31...........Haydn
Allegro
Andante Allegro
Flute, Cello, and Piano
"Whisper Moon".............Bolcom
Violin, Cello, Flute, Clarinet, and Piano
"Contrasts"...............Bartok
Violin, Clarinet, and Piano
INTERMISSION
Trio in C minor, Op. 101...........Brahms
Allegro energico
Presto non assai
Andante grazioso Allegro molto
Violin, Cello, and Piano
Columbia and Cri Records
Fourth Concert Fourteenth Annual Chamber Arts Series Complete Programs 4024
PROGRAM NOTES
Trio in G major, No. 31........Franz Joseph Haydn
Haydn was born in 1732 in a village on the border of Austria and Hungary. His musical career began as a Vienna choirboy at the tender age of eight. By the time of his death, in 1809, he had composed some of the greatest music known to man among which are numbered one hundred and four symphonies, more than eightyfive string quartets and quintets, trios, oratorios, cantatas, voice, piano and solo instrumental works, church music, and overtures.
His output of more than one hundred seventyfive trios included three which were composed for flute, cello, and piano. All of them were written in virtuoso style for the flute and piano, with the cello voice reflecting the influence of the "continuo" part characteristic of the baroque style.
"Whisper Moon"...........William Bolcom
William Bolcom composed "Whisper Moon" in 1971. This work was commissioned by Bowdoin College for The Aeolian Chamber Players, and is dedicated to Bolcom's former composition teacher, Darius Milhaud.
The piece is a musical autobiography containing quotations that Bolcom feels have affected his music and his life. It employs the collage technique, juxtaposing seemingly unre?lated musical fragments from both the popular and classical worlds. Born in 1938 in Seattle, Bolcom is currently teaching composition at the University of Michigan School of Music.
"Contrasts".............Bela Bartok
"Contrasts" was composed in 1936, on commission from the clarinetist Benny Goodman and famed Hungarian violinist Joseph Szigeti. The work follows an old Hungarian form, consisting of a slow dance and fast dance. The slow movement, "Relaxation," was added by Bartok after the completion of the other movements, serving as an interlude between the two dances.
Trio in C minor, Op. 101........Johannes Brahms
The Trio in C minor is the third of three trios written for violin, cello, and piano by the composer. It is the only one in the minor key, and was a favorite of numerous musicians, including Clara Schumann, who believed it one of the greatest of his chamber works.
Against the broad and rather dramatic style of the opening movement, the second, written in duple meter, contrasts by assuming the form and style of a scherzo. The third movement reflects a lilting, Viennese influence, while the virtuoso composition of the final movement brings the trio to a brilliant close.
About the Artists
The Aeolian Chamber Players were brought together in 1961 by Lewis Kaplan, who was convinced that a permanent ensemble should be formed to perform the rich but rarelyheard chamber repertoire for the mixed timbres of strings and winds. Attracted by the group's flexible instrumentation, many contemporary composers have written especially for them, so that over the years the Aeolians have developed an extensive repertoire of both traditional and contemporary works. They are now particularly noted for their programs combining both elements.
The group has toured extensively, both here and in Europe, and since 1964 the players have been the resident ensemble at the Bowdoin College Summer Music School. Tonight's concert is their second Ann Arbor appearance.
UNIVERSITY MUSICAL SOCIETY
Burton Memorial Tower, Ann Arbor, Michigan 48109 Phones: 6653717, 7642538