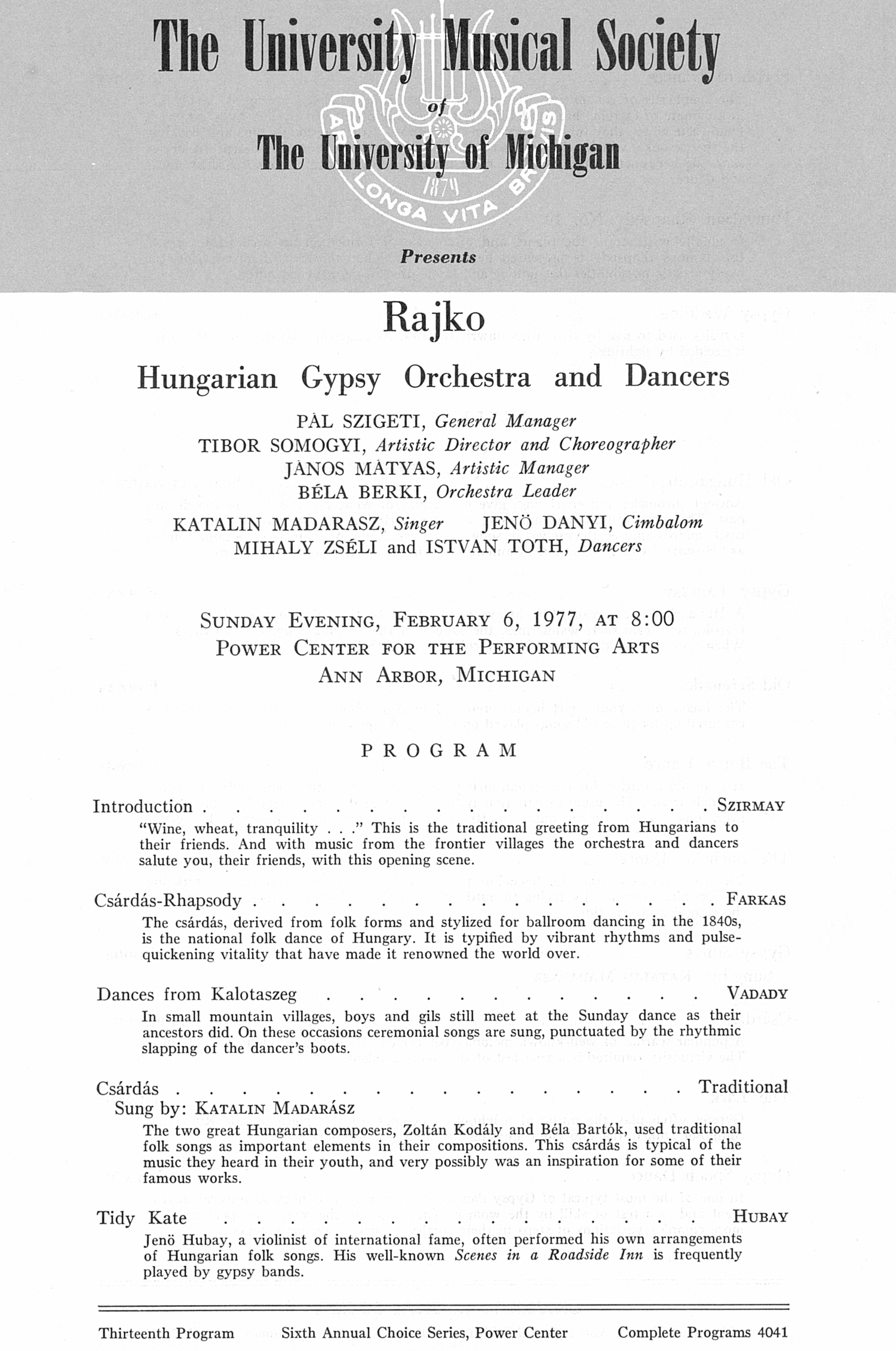 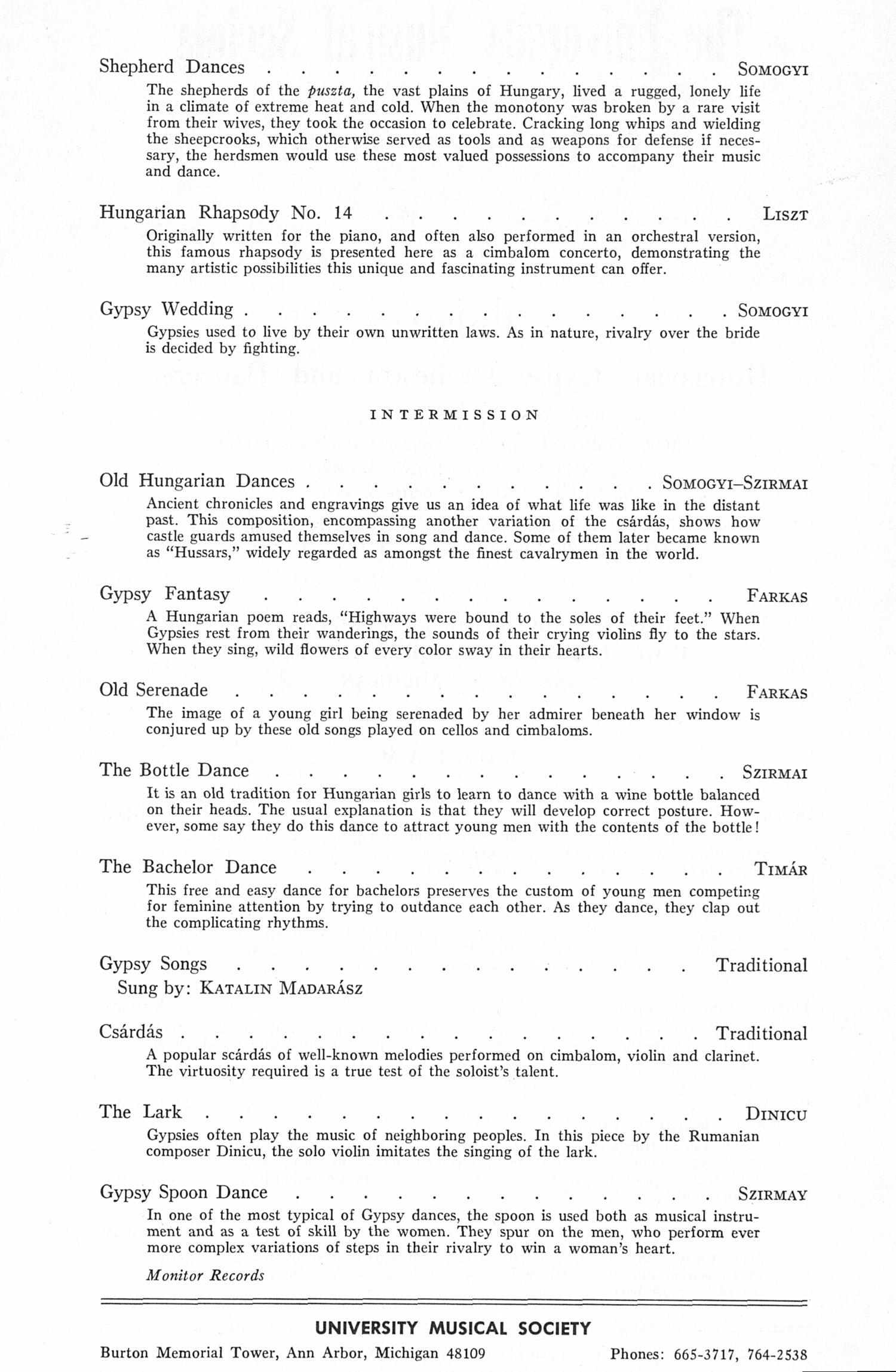 The University Musical Society
i
The University of Michigan
Presents
Rajko
Hungarian Gypsy Orchestra and Dancers
PAL SZIGETI, General Manager
TIBOR SOMOGYI, Artistic Director and Choreographer
JANOS MATYAS, Artistic Manager
BELA BERKI, Orchestra Leader
KATALIN MADARASZ, Singer JENO DANYI, Cimbalom MIHALY ZSELI and ISTVAN TOTH, Dancers
Sunday Evening, February 6, 1977, at 8:00
Power Center for the Performing Arts
Ann Arbor, Michigan
PROGRAM
Introduction................Szirmay
"Wine, wheat, tranquility . . ." This is the traditional greeting from Hungarians to their friends. And with music from the frontier villages the orchestra and dancers salute you, their friends, with this opening scene.
CsardasRhapsody...............Farkas
The csardas, derived from folk forms and stylized for ballroom dancing in the 1840s, is the national folk dance of Hungary. It is typified by vibrant rhythms and pulsequickening vitality that have made it renowned the world over.
Dances from Kalotaszeg............Vadady
In small mountain villages, boys and gils still meet at the Sunday dance as their ancestors did. On these occasions ceremonial songs are sung, punctuated by the rhythmic slapping of the dancer's boots.
Csardas................Traditional
Sung by: Katalin Madarasz
The two great Hungarian composers, Zoltan Kodaly and Bela Bartok, used traditional folk songs as important elements in their compositions. This csardas is typical of the music they heard in their youth, and very possibly was an inspiration for some of their famous works.
Tidy Kate...............Hubay
Jenb Hubay, a violinist of international fame, often performed his own arrangements of Hungarian folk songs. His wellknown Scenes in a Roadside Inn is frequently played by gypsy bands.
Thirteenth Program Sixth Annual Choice Series, Power Center Complete Programs 4041
Shepherd Dances..............Somogyi
The shepherds of the puszta, the vast plains of Hungary, lived a rugged, lonely life in a climate of extreme heat and cold. When the monotony was broken by a rare visit from their wives, they took the occasion to celebrate. Cracking long whips and wielding the sheepcrooks, which otherwise served as tools and as weapons for defense if neces?sary, the herdsmen would use these most valued possessions to accompany their music and dance.
Hungarian Rhapsody No. 14...........Liszt
Originally written for the piano, and often also performed in an orchestral version, this famous rhapsody is presented here as a cimbalom concerto, demonstrating the many artistic possibilities this unique and fascinating instrument can offer.
Gypsy Wedding...............Somogyi
Gypsies used to live by their own unwritten laws. As in nature, rivalry over the bride is decided by righting.
INTERMISSION
Old Hungarian Dances...........SomogyiSzirmai
Ancient chronicles and engravings give us an idea of what life was like in the distant past. This composition, encompassing another variation of the csardas, shows how castle guards amused themselves in song and dance. Some of them later became known as "Hussars," widely regarded as amongst the finest cavalrymen in the world.
Gypsy Fantasy..............Farkas
A Hungarian poem reads, "Highways were bound to the soles of their feet." When Gypsies rest from their wanderings, the sounds of their crying violins fly to the stars. When they sing, wild flowers of every color sway in their hearts.
Old Serenade...............Farkas
The image of a young girl being serenaded by her admirer beneath her window is conjured up by these old songs played on cellos and cimbaloms.
The Bottle Dance..............Szirmai
It is an old tradition for Hungarian girls to learn to dance with a wine bottle balanced on their heads. The usual explanation is that they will develop correct posture. How?ever, some say they do this dance to attract young men with the contents of the bottle!
The Bachelor Dance.............Timar
This free and easy dance for bachelors preserves the custom of young men competing for feminine attention by trying to outdance each other. As they dance, they clap out the complicating rhythms.
Gypsy Songs..............Traditional
Sung by: Katalin Madarasz
Csardas................Traditional
A popular scardas of wellknown melodies performed on cimbalom, violin and clarinet. The virtuosity required is a true test of the soloist's talent.
The Lark................Dinicu
Gypsies often play the music of neighboring peoples. In this piece by the Rumanian composer Dinicu, the solo violin imitates the singing of the lark.
Gypsy Spoon Dance.............Szirmay
In one of the most typical of Gypsy dances, the spoon is used both as musical instru?ment and as a test of skill by the women. They spur on the men, who perform ever more complex variations of steps in their rivalry to win a woman's heart.
Monitor Records
UNIVERSITY MUSICAL SOCIETY
Burton Memorial Tower, Ann Arbor, Michigan 48109 Phones: 6653717, 7642538