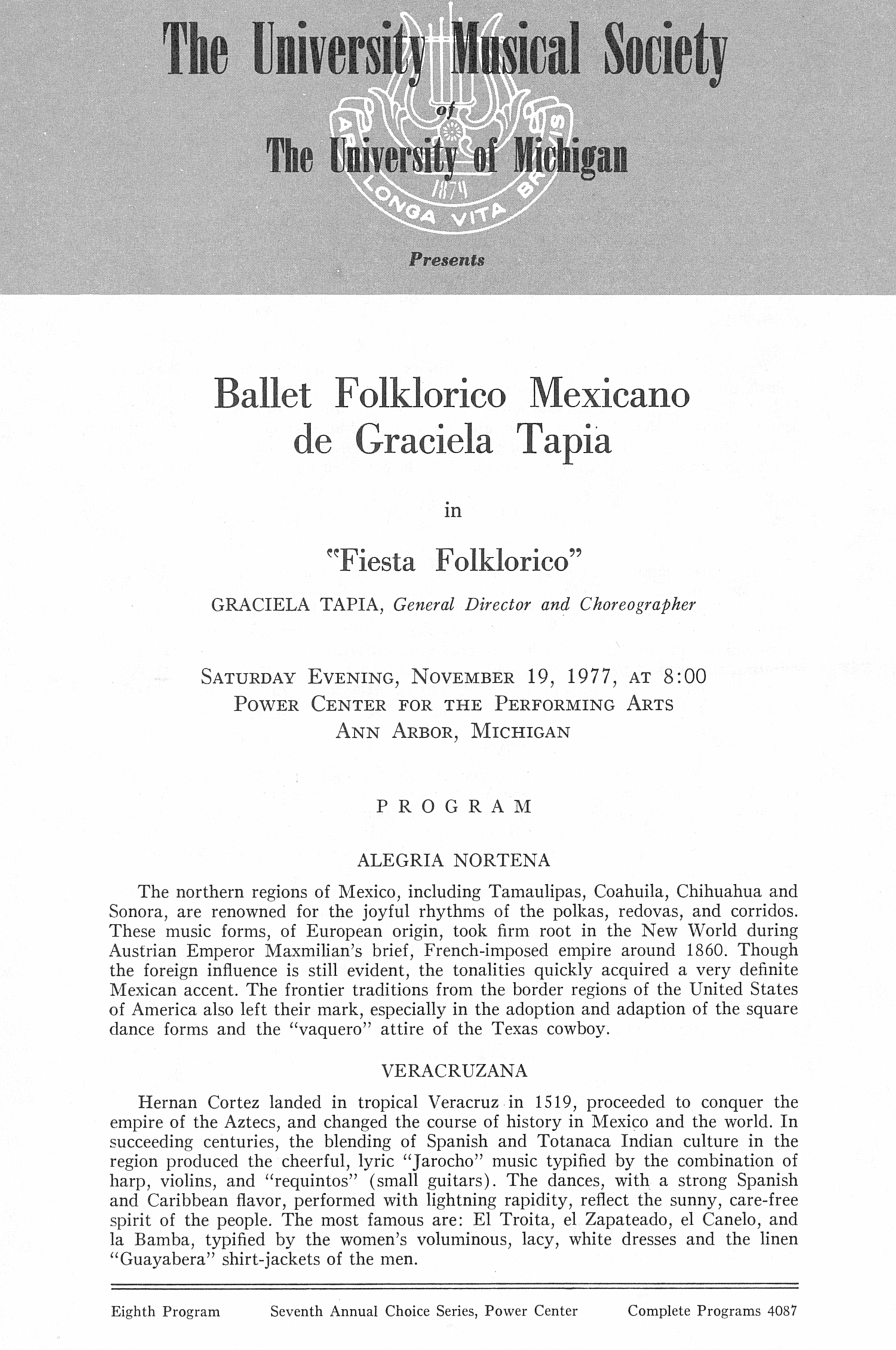 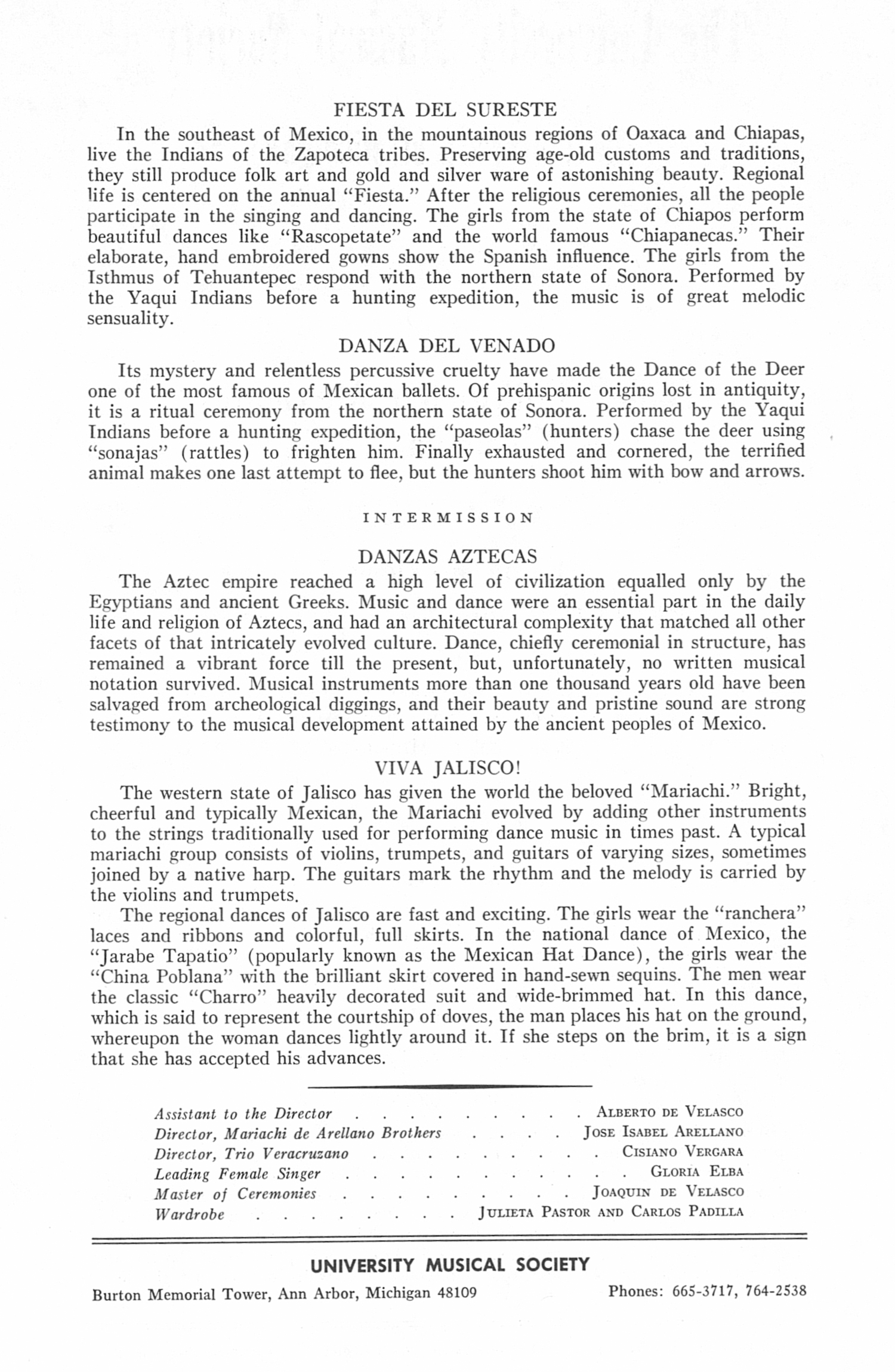 The University Musical Society
The University i
Ballet Folklorico Mexicano de Graciela Tapia
in
"Fiesta Folklorico"
GRACIELA TAPIA, General Director and Choreographer
Saturday Evening, November 19, 1977, at 8:00
Power Center for the Performing Arts
Ann Arbor, Michigan
PROGRAM
ALEGRIA NORTENA
The northern regions of Mexico, including Tamaulipas, Coahuila, Chihuahua and Sonora, are renowned for the joyful rhythms of the polkas, redovas, and corridos. These music forms, of European origin, took firm root in the New World during Austrian Emperor Maxmilian's brief, Frenchimposed empire around 1860. Though the foreign influence is still evident, the tonalities quickly acquired a very definite Mexican accent. The frontier traditions from the border regions of the United States of America also left their mark, especially in the adoption and adaption of the square dance forms and the "vaquero" attire of the Texas cowboy.
VERACRUZANA
Hernan Cortez landed in tropical Veracruz in 1519, proceeded to conquer the empire of the Aztecs, and changed the course of history in Mexico and the world. In succeeding centuries, the blending of Spanish and Totanaca Indian culture in the region produced the cheerful, lyric "Jarocho" music typified by the combination of harp, violins, and "requintos" (small guitars). The dances, with a strong Spanish and Caribbean flavor, performed with lightning rapidity, reflect the sunny, carefree spirit of the people. The most famous are: El Troita, el Zapateado, el Canelo, and la Bamba, typified by the women's voluminous, lacy, white dresses and the linen "Guayabera" shirtjackets of the men.
Eighth Program Seventh Annual Choice Series, Power Center Complete Programs 4087
FIESTA DEL SURESTE
In the southeast of Mexico, in the mountainous regions of Oaxaca and Chiapas, live the Indians of the Zapoteca tribes. Preserving ageold customs and traditions, they still produce folk art and gold and silver ware of astonishing beauty. Regional life is centered on the annual "Fiesta." After the religious ceremonies, all the people participate in the singing and dancing. The girls from the state of Chiapos perform beautiful dances like "Rascopetate" and the world famous "Chiapanecas." Their elaborate, hand embroidered gowns show the Spanish influence. The girls from the Isthmus of Tehuantepec respond with the northern state of Sonora. Performed by the Yaqui Indians before a hunting expedition, the music is of great melodic sensuality.
DANZA DEL VENADO
Its mystery and relentless percussive cruelty have made the Dance of the Deer one of the most famous of Mexican ballets. Of prehispanic origins lost in antiquity, it is a ritual ceremony from the northern state of Sonora. Performed by the Yaqui Indians before a hunting expedition, the "paseolas" (hunters) chase the deer using "sonajas" (rattles) to frighten him. Finally exhausted and cornered, the terrified animal makes one last attempt to flee, but the hunters shoot him with bow and arrows.
INTERMISSION
DANZAS AZTECAS
The Aztec empire reached a high level of civilization equalled only by the Egyptians and ancient Greeks. Music and dance were an essential part in the daily life and religion of Aztecs, and had an architectural complexity that matched all other facets of that intricately evolved culture. Dance, chiefly ceremonial in structure, has remained a vibrant force till the present, but, unfortunately, no written musical notation survived. Musical instruments more than one thousand years old have been salvaged from archeological diggings, and their beauty and pristine sound are strong testimony to the musical development attained by the ancient peoples of Mexico.
VIVA JALISCO!
The western state of Jalisco has given the world the beloved "Mariachi." Bright, cheerful and typically Mexican, the Mariachi evolved by adding other instruments to the strings traditionally used for performing dance music in times past. A typical mariachi group consists of violins, trumpets, and guitars of varying sizes, sometimes joined by a native harp. The guitars mark the rhythm and the melody is carried by the violins and trumpets.
The regional dances of Jalisco are fast and exciting. The girls wear the "ranchera" laces and ribbons and colorful, full skirts. In the national dance of Mexico, the "Jarabe Tapatio" (popularly known as the Mexican Hat Dance), the girls wear the "China Poblana" with the brilliant skirt covered in handsewn sequins. The men wear the classic "Charro" heavily decorated suit and widebrimmed hat. In this dance, which is said to represent the courtship of doves, the man places his hat on the ground, whereupon the woman dances lightly around it. If she steps on the brim, it is a sign that she has accepted his advances.
Assistant to the Director.........Alberto de Velasco
Director, Mariachi de Arellano Brothers .... Jose Isabel Arellano
Director, Trio Veracruzano.........Cisiano Vercara
Leading Female Singer...........Gloria Elba
Master of Ceremonies.........Joaquin de Velasco
Wardrobe........Julieta Pastor and Carlos Padilla
UNIVERSITY MUSICAL SOCIETY
Burton Memorial Tower, Ann Arbor, Michigan 48109 Phones: 6653717, 7642538