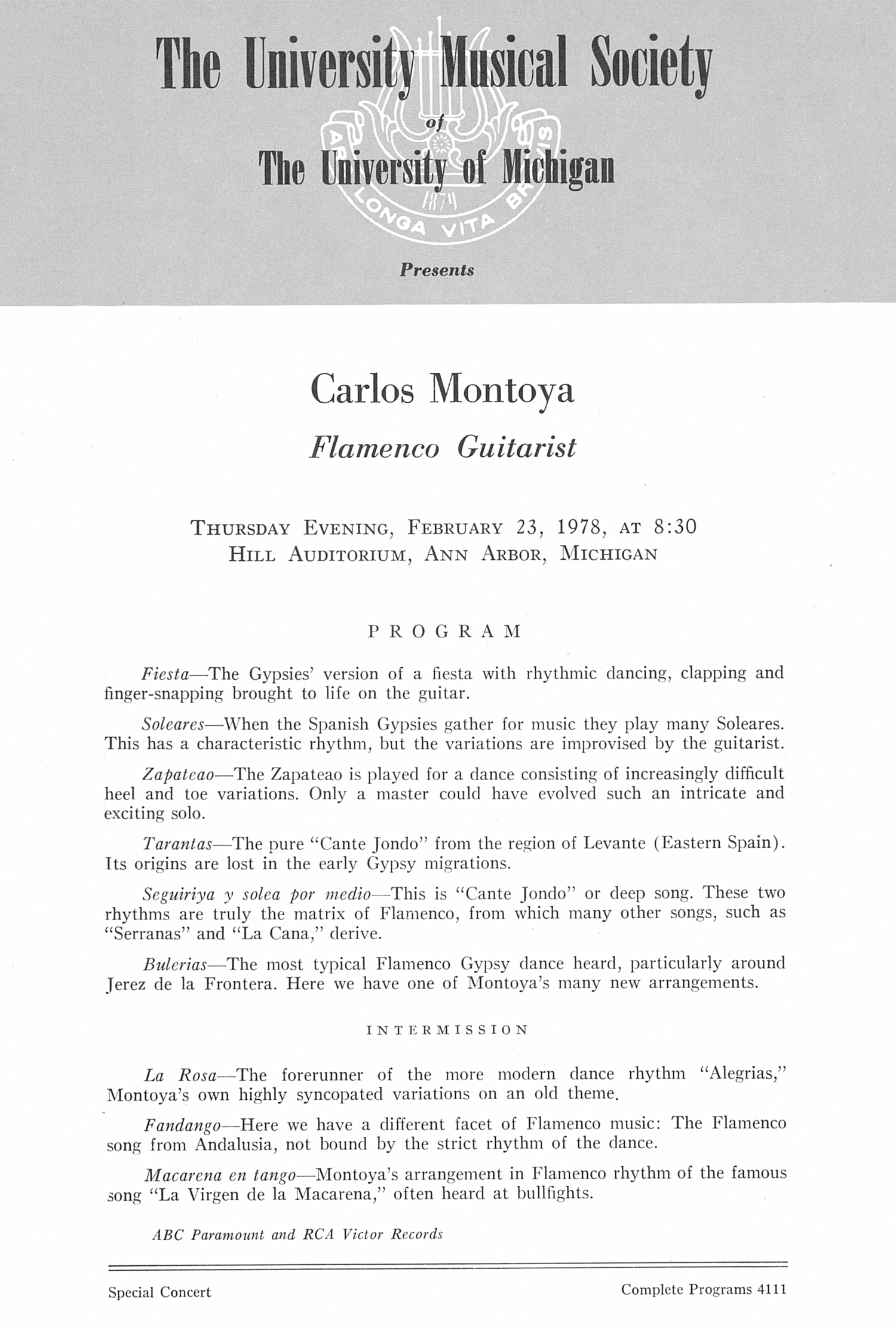 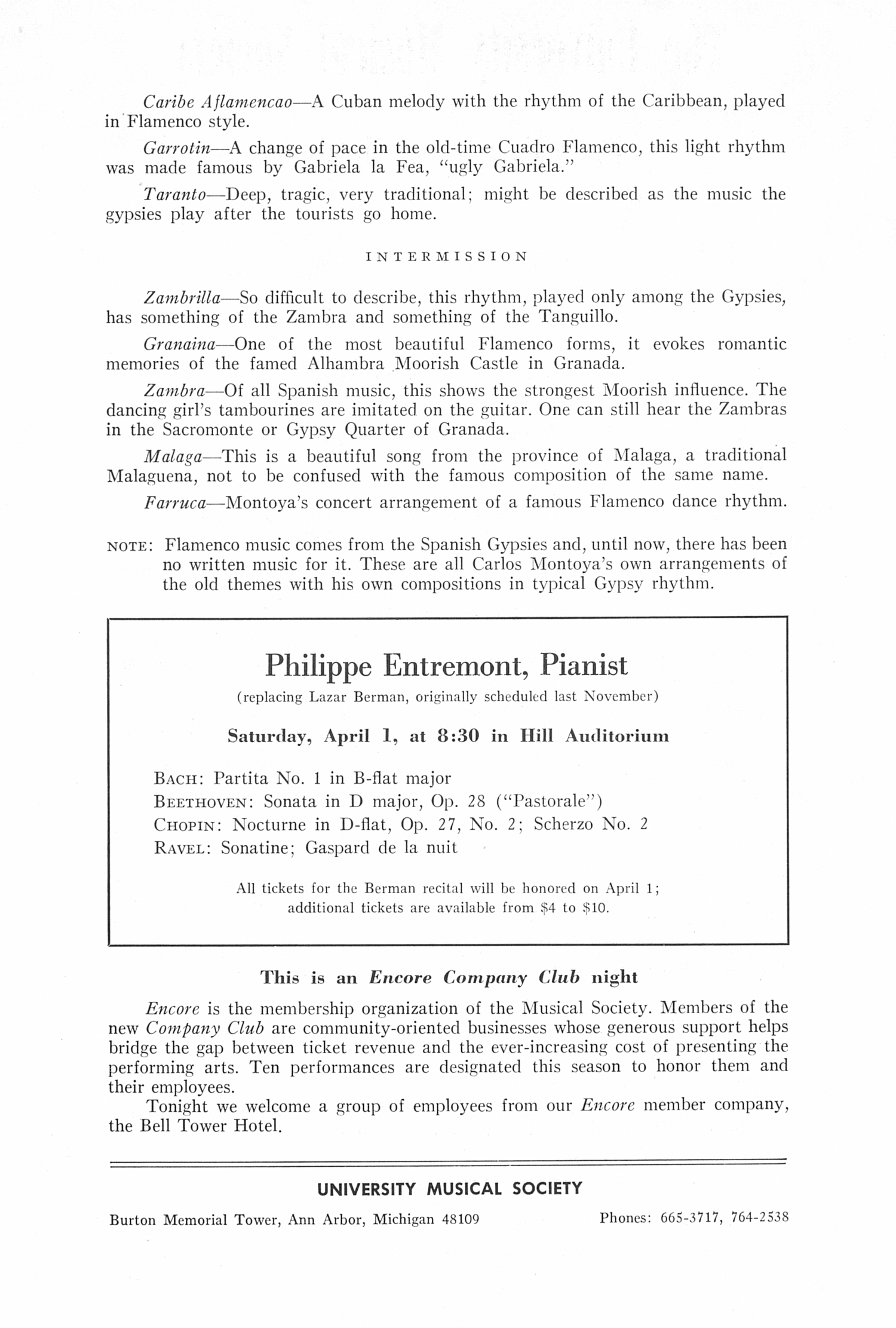 The University Musical Society
of
The University of Michigan
Presents
Carlos Montoya
Flamenco Guitarist
Thursday Evening, February 23, 1978, at 8:30 Hill Auditorium, Ann Arbor, Michigan
PROGRAM
Fiesta--The Gypsies' version of a fiesta with rhythmic dancing, clapping and fingersnapping brought to life on the guitar.
Soleares--When the Spanish Gypsies gather for music they play many Soleares. This has a characteristic rhythm, but the variations are improvised by the guitarist.
Zapatrao--The Zapateao is played for a dance consisting of increasingly difficult heel and toe variations. Only a master could have evolved such an intricate and exciting solo.
Tarantas--The pure "Cante Jondo" from the region of Levante (Eastern Spain). Its origins are lost in the early Gypsy migrations.
Srguiriya y solra par media This is "Cante Jondo" or deep song. These two rhythms are truly the matrix of Flamenco, from which many other songs, such as "Serranas" and "La Cana," derive.
Bulcrias--The most typical Flamenco Gypsy dance heard, particularly around Jerez de la Frontera. Here we have one of Montoya's many new arrangements.
INTERMISSION
La Rosa--The forerunner of the more modern dance rhythm "Alegrias," Montoya's own highly syncopated variations on an old theme.
Fandango--Here we have a different facet of Flamenco music: The Flamenco song from Andalusia, not bound by the strict rhythm of the dance.
Macarcna en tango--Montoya's arrangement in Flamenco rhythm of the famous song "La Virgen de la Macarena," often heard at bullfights.
ABC Paramount and RCA Victor Records
Special Concert Complete Programs 4111
Caribc Ajlamcncao--A Cuban melody with the rhythm of the Caribbean, played in Flamenco style.
Garrotin--A change of pace in the oldtime Cuadro Flamenco, this light rhythm was made famous by Gabriela la Fea, "ugly Gabriela."
Taranto--Deep, tragic, very traditional; might be described as the music the gypsies play after the tourists go home.
INTERMISSION
Zambrilla--So difficult to describe, this rhythm, played only among the Gypsies, has something of the Zambia and something of the Tanguillo.
Granaina--One of the most beautiful Flamenco forms, it evokes romantic memories of the famed Alhambra Moorish Castle in Granada.
Zambra--Of all Spanish music, this shows the strongest Moorish influence. The dancing girl's tambourines are imitated on the guitar. One can still hear the Zambras in the Sacromonte or Gypsy Quarter of Granada.
Malaga--This is a beautiful song from the province of Malaga, a traditional Malaguena, not to be confused with the famous composition of the same name.
Farruca--Montoya's concert arrangement of a famous Flamenco dance rhythm.
note: Flamenco music comes from the Spanish Gypsies and, until now, there has been no written music for it. These are all Carlos Montoya's own arrangements of the old themes with his own compositions in typical Gypsy rhythm.
Philippe Entremont, Pianist
(replacing Lazar Bcrman, originally scheduled last November) Saturday, April 1, at 8:30 in Hill Auditorium
Bach: Partita No. 1 in Bflat major Beethoven: Sonata in D major, Op. 28 ("Pastorale") Chopin: Nocturne in Dflat, Op. 27, No. 2; Scherzo No. 2 Ravel: Sonatine; Gaspard de la nuit
All tickets for the Berman recital will be honored on April 1; additional tickets are available from S4 to S10.
This is an Encore Company i.luh ninhi
Encore is the membership organization of the Musical Society. Members of the new Company Club are communityoriented businesses whose generous support helps bridge the gap between ticket revenue and the everincreasing cost of presenting the performing arts. Ten performances are designated this season to honor them and their employees.
Tonight we welcome a group of employees from our Encore member company, the Bell Tower Hotel.
UNIVERSITY MUSICAL SOCIETY
Burton Memorial Tower, Ann Arbor, Michigan 48109 Phones: 6653717, 7642538