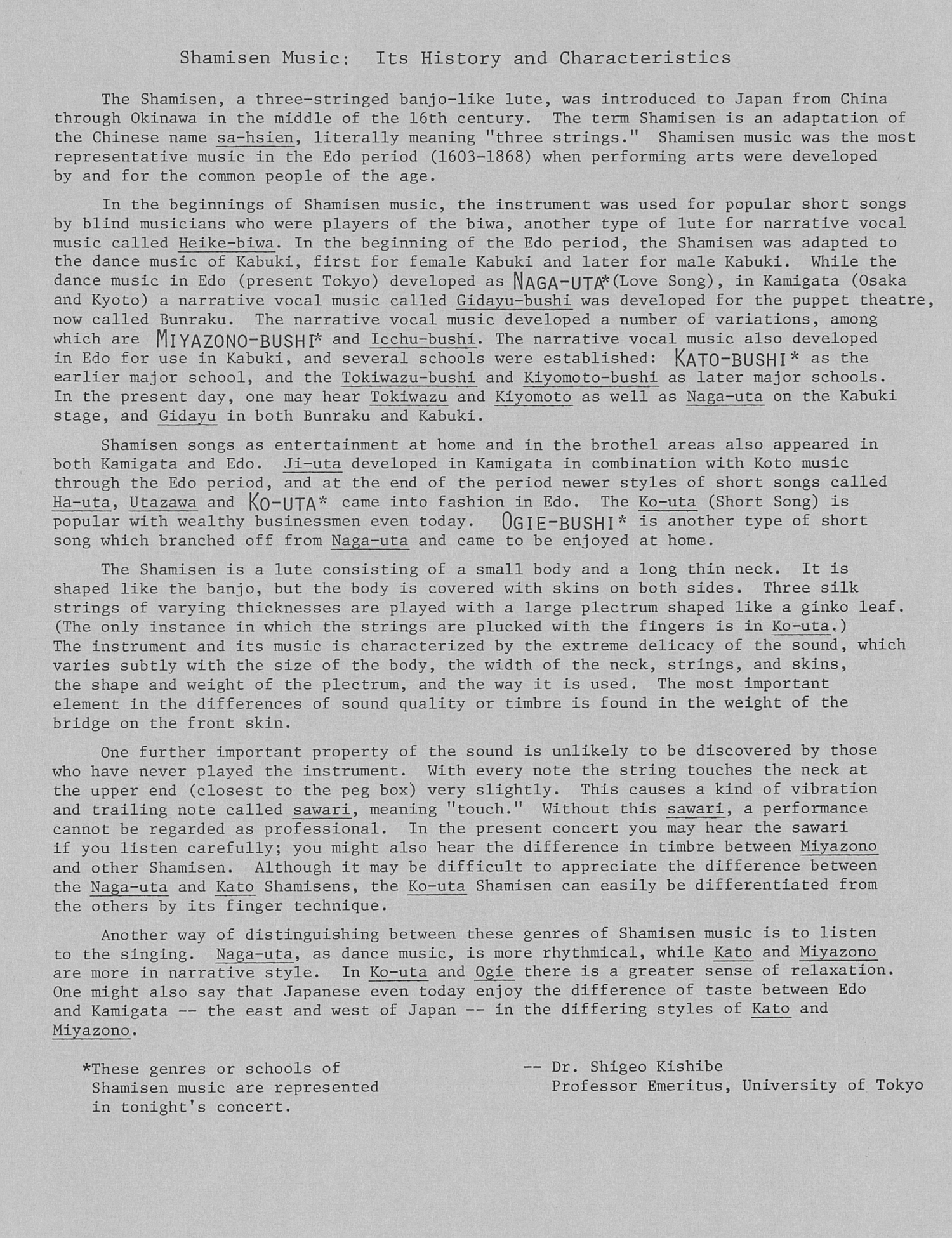 Shamisen Music: Its History and Characteristics
The Shamisen, a threestringed banjolike lute, was introduced to Japan from China through Okinawa in the middle of the 16th century. The term Shamisen is an adaptation of the Chinese name sahsien, literally meaning "three strings." Shamisen music was the most representative music in the Edo period (16031868) when performing arts were developed by and for the common people of the age.
In the beginnings of Shamisen music, the instrument was used for popular short songs by blind musicians who were players of the biwa, another type of lute for narrative vocal music called Heikebiwa. In the beginning of the Edo period, the Shamisen was adapted to the dance music of Kabuki, first for female Kabuki and later for male Kabuki. While the dance music in Edo (present Tokyo) developed as NAGAUTA(Love Song), in Kamigata (Osaka and Kyoto) a narrative vocal music called Gidayubushi was developed for the puppet theatre, now called Bunraku. The narrative vocal music developed a number of variations, among which are MlYAZONOBUSH I and Icchubushi. The narrative vocal music also developed in Edo for use in Kabuki, and several schools were established: KATOBUSHI as tne earlier major school, and the Tokiwazubushi and Kiyomotobushi as later major schools. In the present day, one may hear Tokiwazu and Kiyomoto as well as Nagauta on the Kabuki stage, and Gidayu in both Bunraku and Kabuki.
Shamisen songs as entertainment at home and in the brothel areas also appeared in both Kamigata and Edo. Jiuta developed in Kamigata in combination with Koto music through the Edo period, and at the end of the period newer styles of short songs called Hauta, Utazawa and KoUTA came into fashion in Edo. The Kouta (Short Song) is popular with wealthy businessmen even today. OgIEBUSHI is another type of short song which branched off from Nagauta and came to be enjoyed at home.
The Shamisen is a lute consisting of a small body and a long thin neck. It is shaped like the banjo, but the body is covered with skins on both sides. Three silk strings of varying thicknesses are played with a large plectrum shaped like a ginko leaf. (The only instance in which the strings are plucked with the fingers is in Kouta.) The instrument and its music is characterized by the extreme delicacy of the sound, which varies subtly with the size of the body, the width of the neck, strings, and skins, the shape and weight of the plectrum, and the way it is used. The most important element in the differences of sound quality or timbre is found in the weight of the bridge on the front skin.
One further important property of the sound is unlikely to be discovered by those who have never played the instrument. With every note the string touches the neck at the upper end (closest to the peg box) very slightly. This causes a kind of vibration and trailing note called sawari, meaning "touch." Without this sawari, a performance cannot be regarded as professional. In the present concert you may hear the sawari if you listen carefully; you might also hear the difference in timbre between Miyazono and other Shamisen. Although it may be difficult to appreciate the difference between the Nagauta and Kato Shamisens, the Kouta Shamisen can easily be differentiated from the others by its finger technique.
Another way of distinguishing between these genres of Shamisen music is to listen to the singing. Nagauta, as dance music, is more rhythmical, while Kato and Miyazono are more in narrative style. In Kouta and Ogie there is a greater sense of relaxation. One might also say that Japanese even today enjoy the difference of taste between Edo and Kamigata -the east and west of Japan -in the differing styles of Kato and Miyazono.
These genres or schools of -Dr. Shigeo Kishibe
Shamisen music are represented Professor Emeritus, University of Tokyo
in tonight's concert.