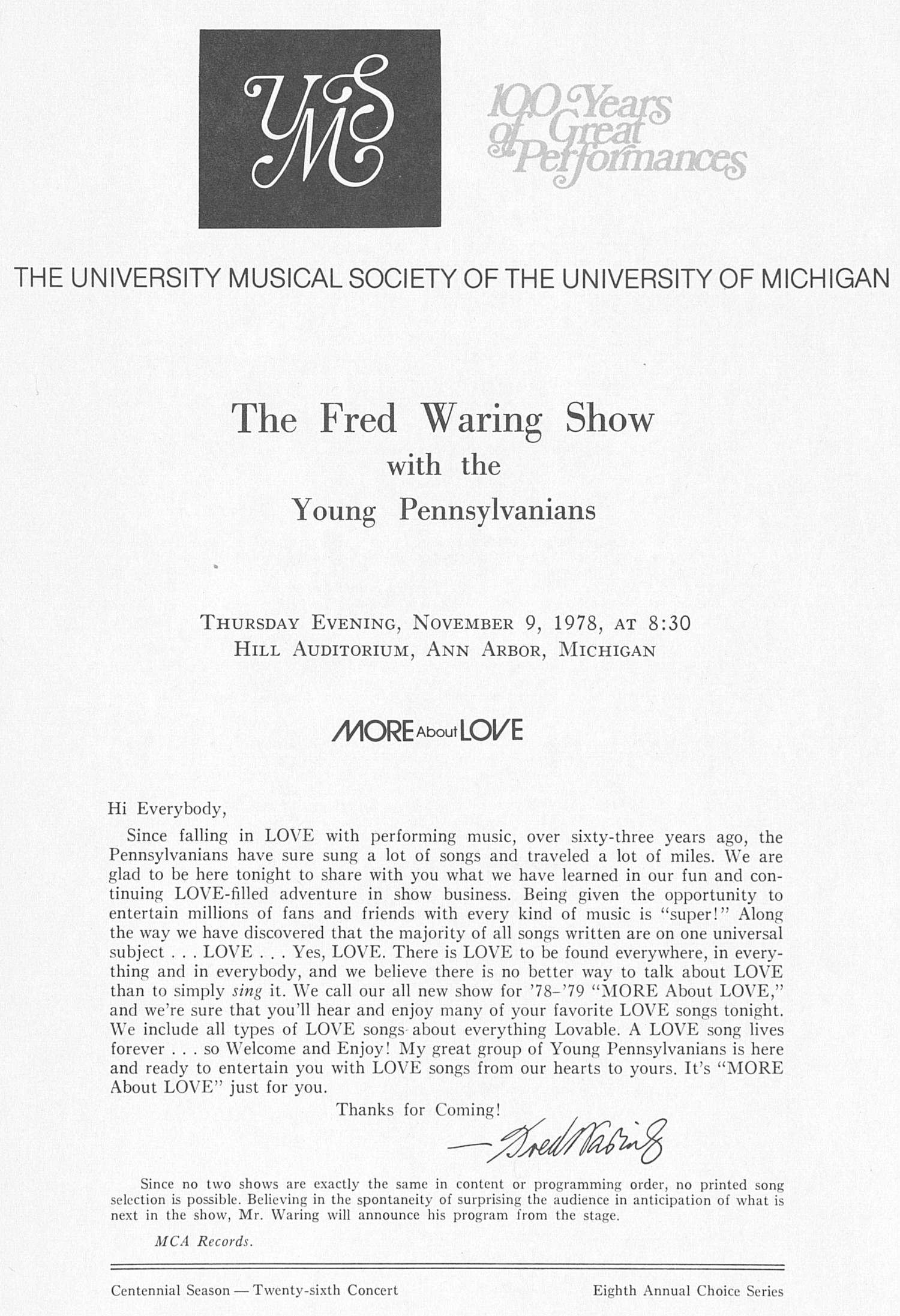 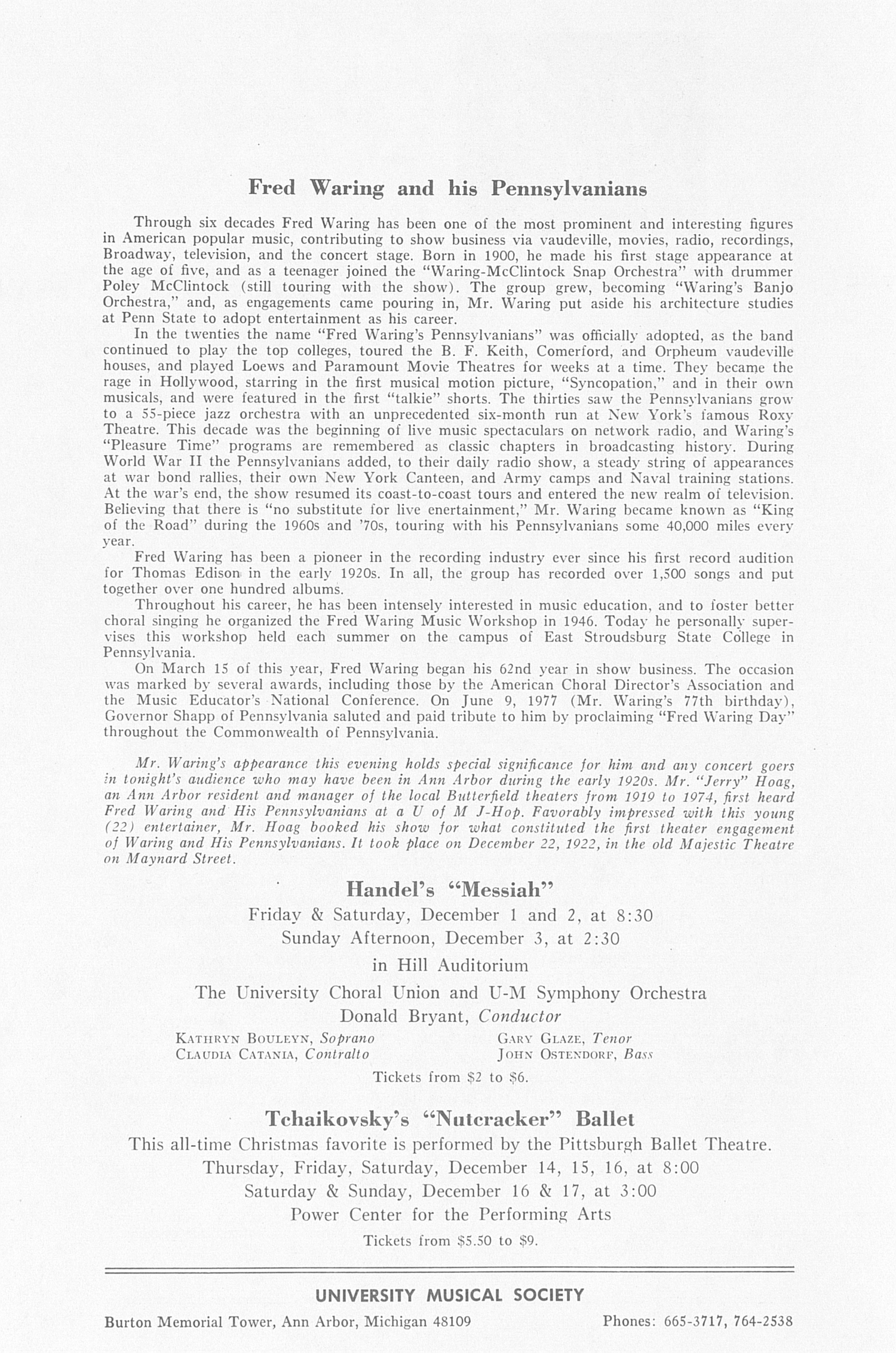 ufnanceg
THE UNIVERSITY MUSICAL SOCIETY OF THE UNIVERSITY OF MICHIGAN
The Fred Waring Show
with the Young Pennsylvanians
Thursday Evening, November 9, 1978, at 8:30 Hill Auditorium, Ann Arbor, Michigan
Hi Everybody,
Since falling in LOVE with performing music, over sixty-three years ago, the Pennsylvanians have sure sung a lot of songs and traveled a lot of miles. We are glad to be here tonight to share with you what we have learned in our fun and con?tinuing LOVE-filled adventure in show business. Being given the opportunity to entertain millions of fans and friends with every kind of music is "super!" Along the way we have discovered that the majority of all songs written are on one universal subject . . . LOVE . . . Yes, LOVE. There is LOVE to be found everywhere, in every?thing and in everybody, and we believe there is no better way to talk about LOVE than to simply sing it. We call our all new show for '78-79 "MORE About LOVE," and we're sure that you'll hear and enjoy many of your favorite LOVE songs tonight. We include all types of LOVE songs about everything Lovable. A LOVE song lives forever ... so Welcome and Enjoy! My great group of Young Pennsylvanians is here and ready to entertain you with LOVE songs from our hearts to yours. It's "MORE About LOVE" just for you.
Thanks for Coming!
Since no two shows are exactly the same in content or programming order, no printed song selection is possible. Believing in the spontaneity of surprising the audience in anticipation of what is next in the show, Mr. Waring will announce his program from the stage.
MCA Records.
Centennial Season -Twenty-sixth Concert
Eighth Annual Choice Series
Fred Waring and his Pennsylvanians
Through six decades Fred Waring has been one of the most prominent and interesting figures in American popular music, contributing to show business via vaudeville, movies, radio, recordings, Broadway, television, and the concert stage. Born in 1900, he made his first stage appearance at the age of five, and as a teenager joined the "Waring-McClintock Snap Orchestra" with drummer Poley McClintock (still touring with the show). The group grew, becoming "Waring's Banjo Orchestra," and, as engagements came pouring in, Mr. Waring put aside his architecture studies at Penn State to adopt entertainment as his career.
In the twenties the name "Fred Waring's Pennsylvanians" was officially adopted, as the band continued to play the top colleges, toured the B. F. Keith, Comcrford, and Orpheum vaudeville houses, and played Loews and Paramount Movie Theatres for weeks at a time. They became the rage in Hollywood, starring in the first musical motion picture, "Syncopation." and in their own musicals, and were featured in the first "talkie" shorts. The thirties saw the Pennsylvanians grow to a 55-piece jazz orchestra with an unprecedented six-month run at New York's famous Roxy Theatre. This decade was the beginning of live music spectaculars on network radio, and Waring's "Pleasure Time" programs are remembered as classic chapters in broadcasting history. During World War II the Pennsylvanians added, to their daily radio show, a steady string of appearances at war bond rallies, their own New York Canteen, and Army camps and Naval training stations. At the war's end, the show resumed its coast-to-coast tours and entered the new realm of television. Believing that there is "no substitute for live cnertainment," Mr. Waring became known as "King of the Road" during the 1960s and 70s, touring with his Pennsylvanians some 40,000 miles every year.
Fred Waring has been a pioneer in the recording industry ever since his first record audition for Thomas Edison in the early 1920s. In all, the group has recorded over 1,500 songs and put together over one hundred albums.
Throughout his career, he has been intensely interested in music education, and to foster better choral singing he organized the Fred Waring Music Workshop in 1946. Today he personally super?vises this workshop held each summer on the campus of East Stroudsburg State College in Pennsylvania.
On March 15 of this year, Fred Waring began his 62nd year in show business. The occasion was marked by several awards, including those by the American Choral Director's Association and the Music Educator's National Conference. On June 9, 1977 (Mr. Waring's 77th birthday), Governor Shapp of Pennsylvania saluted and paid tribute to him by proclaiming "Fred Waring Day" throughout the Commonwealth of Pennsylvania.
Mr. Waring's appearance this evening holds special significance for him and any concert goers in tonight's audience who may have been in Ann Arbor during the early 1920s. Mr. "Jerry" Hoag,
an Ann Arbor resident and manager of the local Hutterfield theaters from 1919 to 1974, first heard Fred Waring and His Pennsylvanians at a V of M J-IIop. Favorably impressed with this young (22) entertainer, Mr. Hoag booked his show for what constituted the first theater engagement of Waring and His Pennsylvanians. It took place on December 22, 1922, in the old Majestic Theatre on Maynard Street.
Handel's "Messiah"
Friday & Saturday, December 1 and 2, at 8:30 Sunday Afternoon, December 3, at 2:30
in Hill Auditorium
The University Choral Union and U-M Symphony Orchestra Donald Bryant, Conductor
KATHRYK BoULEYN, Soprano GARY Glaze, Tenor
Claudia Catania, Contralto John Ostendorf, Bass
Tickets from $2 to .S6.
Tchaikovsky's "Nutcracker" Ballet
This all-time Christmas favorite is performed by the Pittsburgh Ballet Theatre.
Thursday, Friday. Saturday, December 14, IS, 16. at 8:00
Saturday & Sunday, December 16 & 17, at 3:00
Power Center for the Performing Arts
Tickets from $5.50 to $9.
UNIVERSITY MUSICAL SOCIETY
Burton Memorial Tower, Ann Arbor, Michigan 48109 Phones: 665-3717, 764-2538