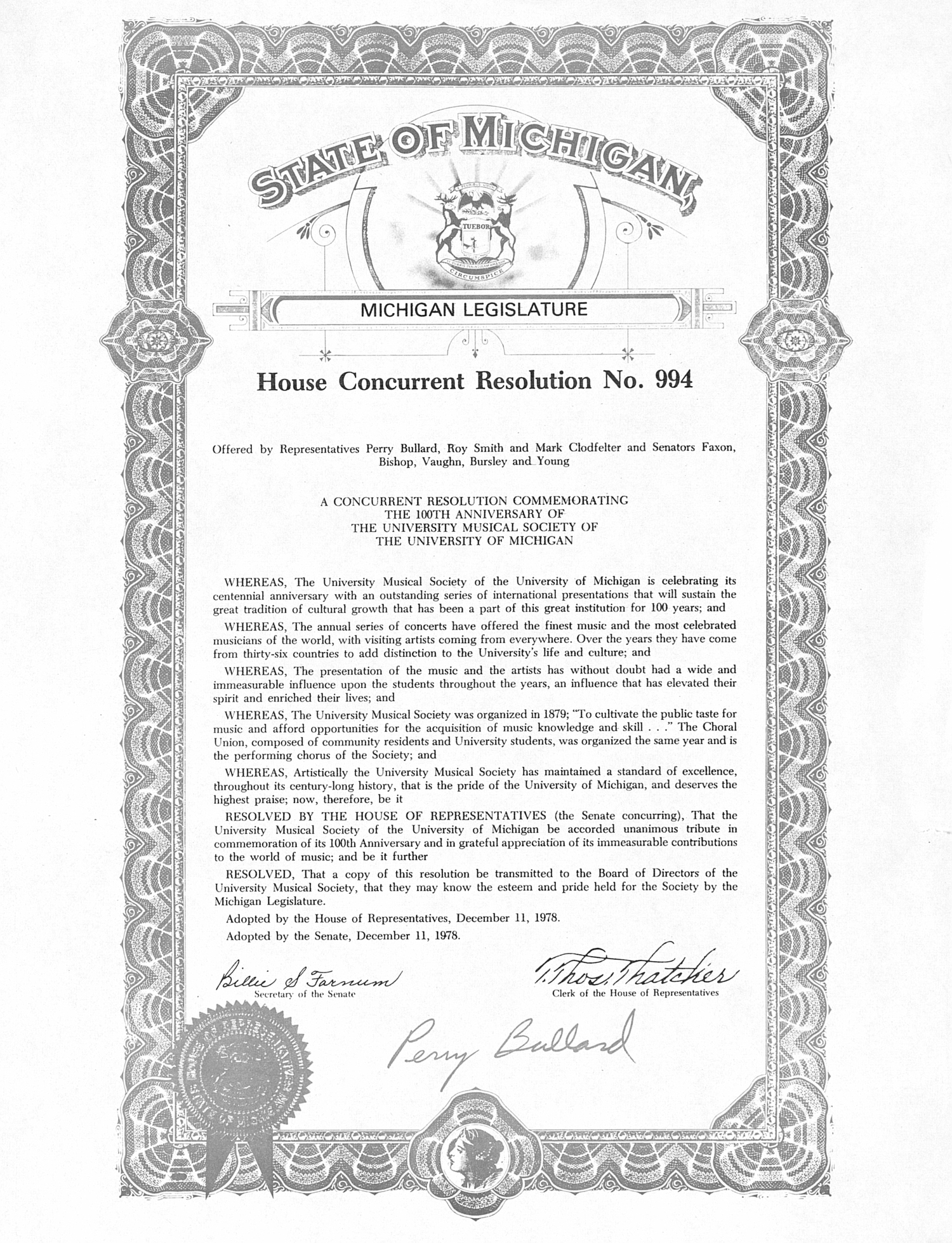 M
MICHIGAN LEGISLATURE
House Concurrent Resolution No. 994
Offered by Representatives Perry Bullard, Roy Smith and Mark Clodfelter and Senators Faxon, Bishop, Vaughn, Bursley and Young
i
A CONCURRENT RESOLUTION COMMEMORATING
THE 100TH ANNIVERSARY OF
THE UNIVERSITY MUSICAL SOCIETY OF
THE UNIVERSITY OF MICHIGAN
WHEREAS, The University Musical Society of the University of Michigan is celebrating its centennial anniversary with an outstanding series of international presentations that will sustain the great tradition of cultural growth that has been a part of this great institution for 100 years; and
WHEREAS, The annual series of concerts have offered the finest music and the most celebrated musicians of the world, with visiting artists coming from everywhere. Over the years they have come from thirtysix countries to add distinction to the University's life and culture; and
WHEREAS, The presentation of the music and the artists has without doubt had a wide and immeasurable influence upon the students throughout the years, an influence that has elevated their spirit and enriched their lives; and
WHEREAS, The University' Musical Society was organized in 1879; 'To cultivate the public taste for music and afford opportunities for the acquisition of music knowledge and skill . . ." The Choral Union, composed of community residents and I'niversity students, was organized the same year and is the performing chorus of the Society; and
WHEREAS, Artistically the University Musical Society has maintained a standard of excellence, throughout its centurylong history, that is the pride of the University of Michigan, and deserves the highest praise; now, therefore, be it
RESOLVED BY THE HOUSE OF REPRESENTATIVES (the Senate concurring), That the University Musical Society of the University of Michigan be accorded unanimous tribute in commemoration of its 100th Anniversary and in grateful appreciation of its immeasurable contributions to the world of music; and be it further
RESOLVED, That a copy of this resolution be transmitted to the Board of Directors of the University Musical Society, that they may know the esteem and pride held for the Society by the Michigan Legislature.
Adopted by the House of Representatives, December 11, 1978.
Adopted by the Senate, December 11, 1978.
t