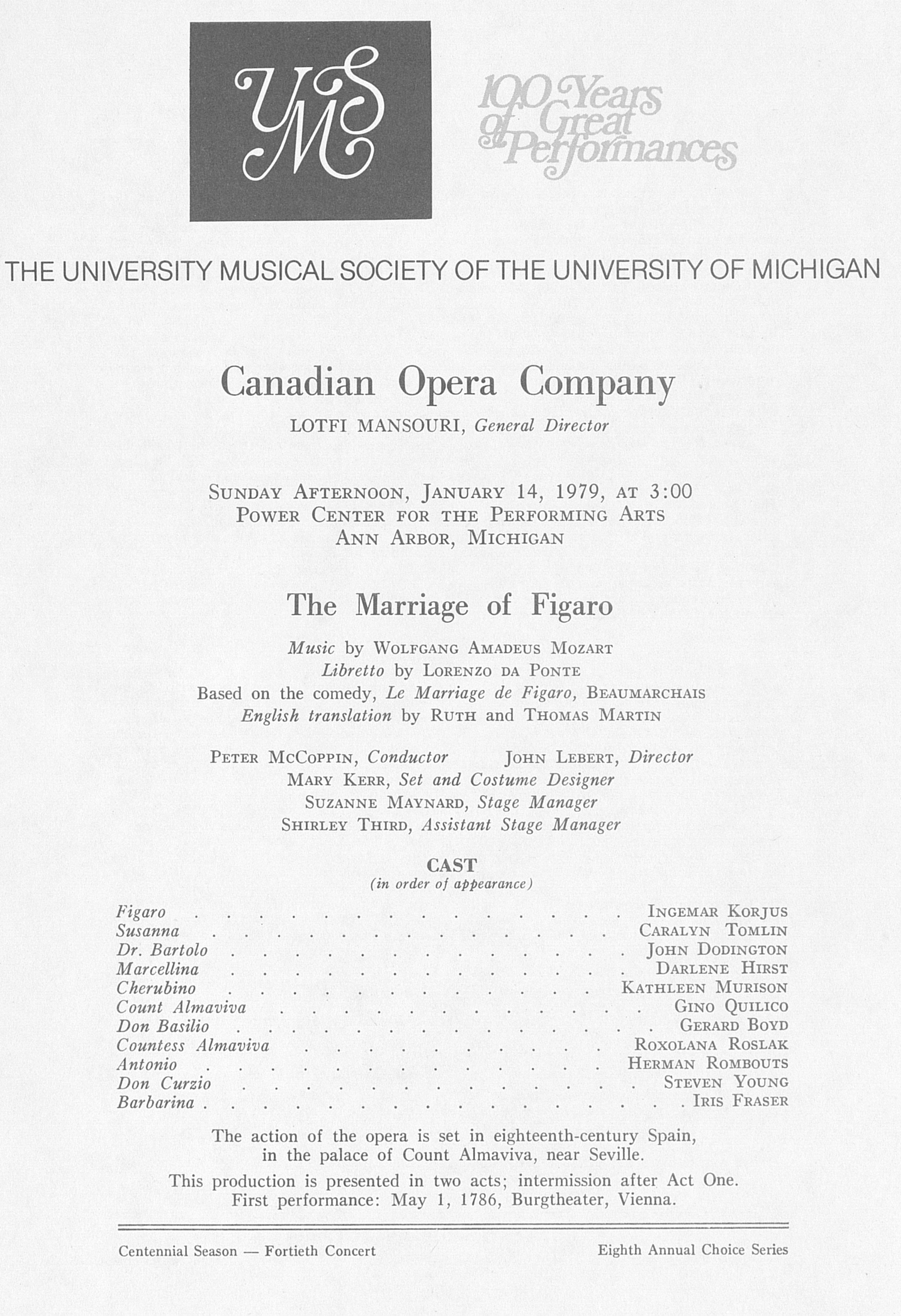 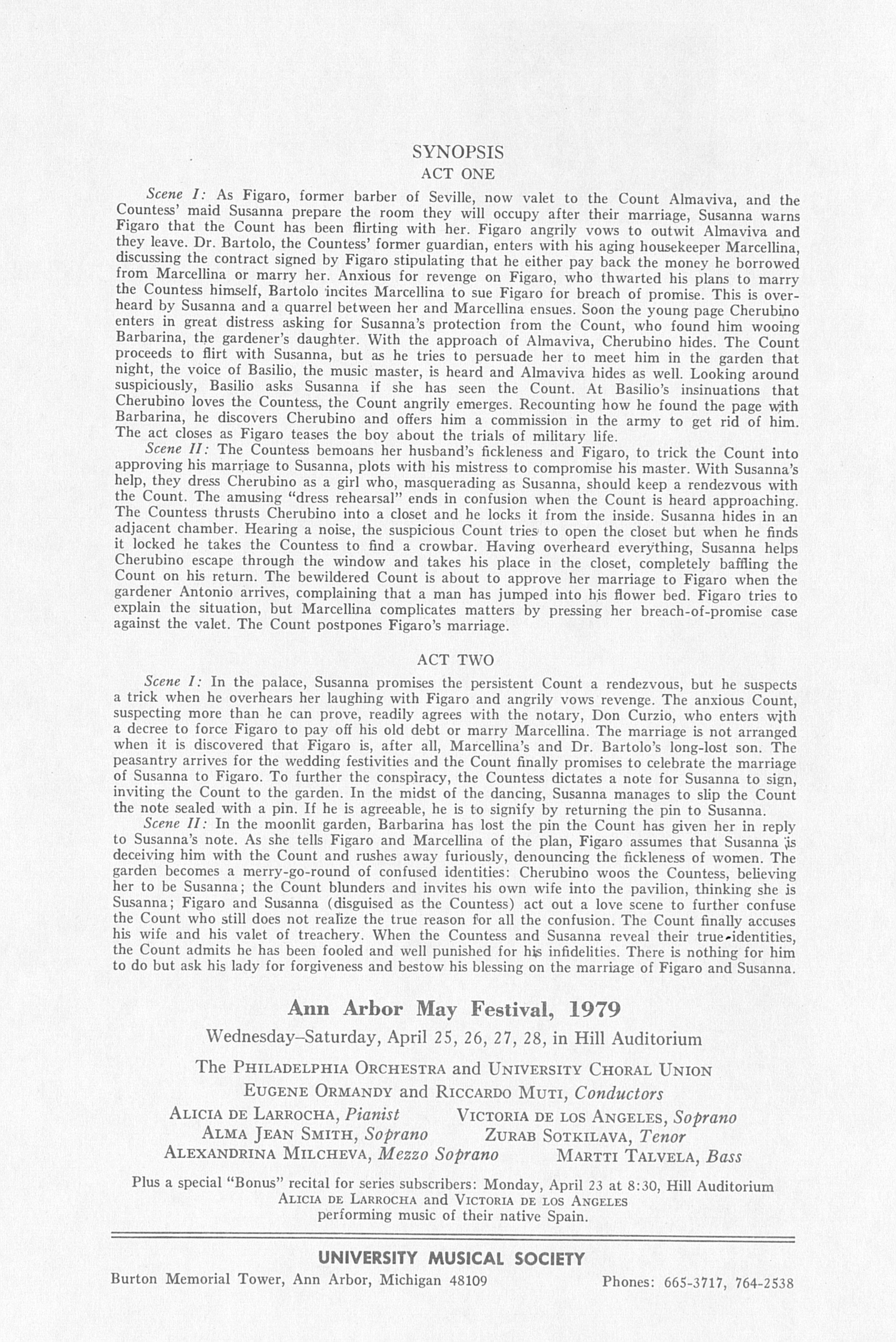 THE UNIVERSITY MUSICAL SOCIETY OF THE UNIVERSITY OF MICHIGAN
Canadian Opera Company
LOTFI MANSOURI, General Director
Sunday Afternoon, January 14, 1979, at 3:00
Power Center for the Performing Arts
Ann Arbor, Michigan
The Marriage of Figaro
Music by Wolfgang Amadeus Mozart
Libretto by Lorenzo da Ponte
Based on the comedy, Le Marriage de Figaro, Beaumarchais English translation by Ruth and Thomas Martin
Peter McCoppin, Conductor John Lebert, Director
Mary Kerr, Set and Costume Designer
Suzanne Maynard, Stage Manager Shirley Third, Assistant Stage Manager
CAST
(in order oj appearance)
Figaro..............Ingemar Korjus
Susanna . ...........Caralyn Tomlin
Dr. Bartolo.............John Dodington
Marcellina.............Darlene Hirst
Cherubino............Kathleen Murison
Count Almaviva............Gino Quilico
Don Basilio..............Gerard Boyd
Countess Almaviva..........Roxolana Roslak
Antonio.............Herman Rombouts
Don Curzio.............Steven Young
Barbarina................Iris Fraser
The action of the opera is set in eighteenth-century Spain, in the palace of Count Almaviva, near Seville.
This production is presented in two acts; intermission after Act One. First performance: May 1, 1786, Burgtheater, Vienna.
Centennial Season -Fortieth Concert Eighth Annual Choice Series
SYNOPSIS ACT ONE
Scene I: As Figaro, former barber of Seville, now valet to the Count Almaviva, and the Countess' maid Susanna prepare the room they will occupy after their marriage, Susanna warns Figaro that the Count has been flirting with her. Figaro angrily vows to outwit Almaviva and they leave. Dr. Bartolo, the Countess' former guardian, enters with his aging housekeeper Marcellina, discussing the contract signed by Figaro stipulating that he either pay back the money he borrowed from Marcellina or marry her. Anxious for revenge on Figaro, who thwarted his plans to marry the Countess himself, Bartolo incites Marcellina to sue Figaro for breach of promise. This is over?heard by Susanna and a quarrel between her and Marcellina ensues. Soon the young page Cherubino enters in great distress asking for Susanna's protection from the Count, who found him wooing Barbarina, the gardener's daughter. With the approach of Almaviva, Cherubino hides. The Count proceeds to flirt with Susanna, but as he tries to persuade her to meet him in the garden that night, the voice of Basilio, the music master, is heard and Almaviva hides as well. Looking around suspiciously, Basilio asks Susanna if she has seen the Count. At Basilio's insinuations that Cherubino loves the Countess, the Count angrily emerges. Recounting how he found the page with Barbarina, he discovers Cherubino and offers him a commission in the army to get rid of him. The act closes as Figaro teases the boy about the trials of military life.
Scene II: The Countess bemoans her husband's fickleness and Figaro, to trick the Count into approving his marriage to Susanna, plots with his mistress to compromise his master. With Susanna's help, they dress Cherubino as a girl who, masquerading as Susanna, should keep a rendezvous with the Count. The amusing "dress rehearsal" ends in confusion when the Count is heard approaching. The Countess thrusts Cherubino into a closet and he locks it from the inside. Susanna hides in an adjacent chamber. Hearing a noise, the suspicious Count tries to open the closet but when he finds it locked he takes the Countess to find a crowbar. Having overheard everything, Susanna helps Cherubino escape through the window and takes his place in the closet, completely baffling the Count on his return. The bewildered Count is about to approve her marriage to Figaro when the gardener Antonio arrives, complaining that a man has jumped into his flower bed. Figaro tries to explain the situation, but Marcellina complicates matters by pressing her breach-of-promise case against the valet. The Count postpones Figaro's marriage.
ACT TWO
Scene I: In the palace, Susanna promises the persistent Count a rendezvous, but he suspects a trick when he overhears her laughing with Figaro and angrily vows revenge. The anxious Count, suspecting more than he can prove, readily agrees with the notary, Don Curzio, who enters wjth a decree to force Figaro to pay off his old debt or marry Marcellina. The marriage is not arranged when it is discovered that Figaro is, after all, Marcellina's and Dr. Bartolo's long-lost son. The peasantry arrives for the wedding festivities and the Count finally promises to celebrate the marriage of Susanna to Figaro. To further the conspiracy, the Countess dictates a note for Susanna to sign, inviting the Count to the garden. In the midst of the dancing, Susanna manages to slip the Count the note sealed with a pin. If he is agreeable, he is to signify by returning the pin to Susanna.
Scene II: In the moonlit garden, Barbarina has lost the pin the Count has given her in reply to Susanna's note. As she tells Figaro and Marcellina of the plan, Figaro assumes that Susanna 'js deceiving him with the Count and rushes away furiously, denouncing the fickleness of women. The garden becomes a merry-go-round of confused identities: Cherubino woos the Countess, believing her to be Susanna; the Count blunders and invites his own wife into the pavilion, thinking she is Susanna; Figaro and Susanna (disguised as the Countess) act out a love scene to further confuse the Count who still does not realize the true reason for all the confusion. The Count finally accuses his wife and his valet of treachery. When the Countess and Susanna reveal their trueidentities, the Count admits he has been fooled and well punished for hfc infidelities. There is nothing for him to do but ask his lady for forgiveness and bestow his blessing on the marriage of Figaro and Susanna.
Ann Arbor May Festival, 1979
Wednesday-Saturday, April 25, 26, 27, 28, in Hill Auditorium
The Philadelphia Orchestra and University Choral Union
Eugene Ormandy and Riccardo Muti, Conductors Alicia de Larrocha, Pianist Victoria de los Angeles, Soprano
Alma Jean Smith, Soprano Zurab Sotkilava, Tenor
Alexandrina Milcheva, Mezzo Soprano Martti Talvela, Bass
Plus a special "Bonus" recital for series subscribers: Monday, April 23 at 8:30, Hill Auditorium
Alicia de Larrocha and Victoria de los Angeles
performing music of their native Spain.
UNIVERSITY MUSICAL SOCIETY
Burton Memorial Tower, Ann Arbor, Michigan 48109 Phones: 665-3717, 764-2538