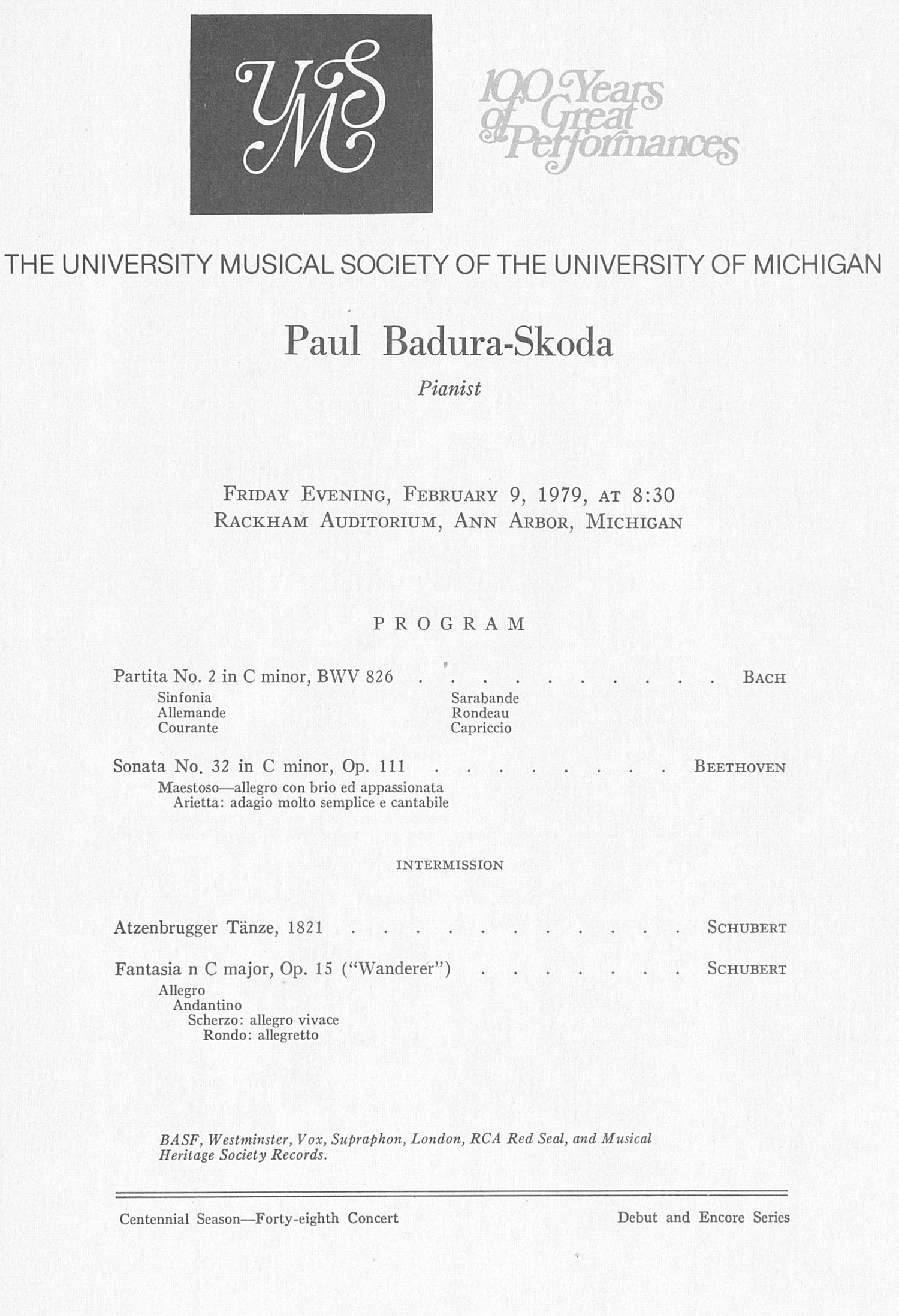 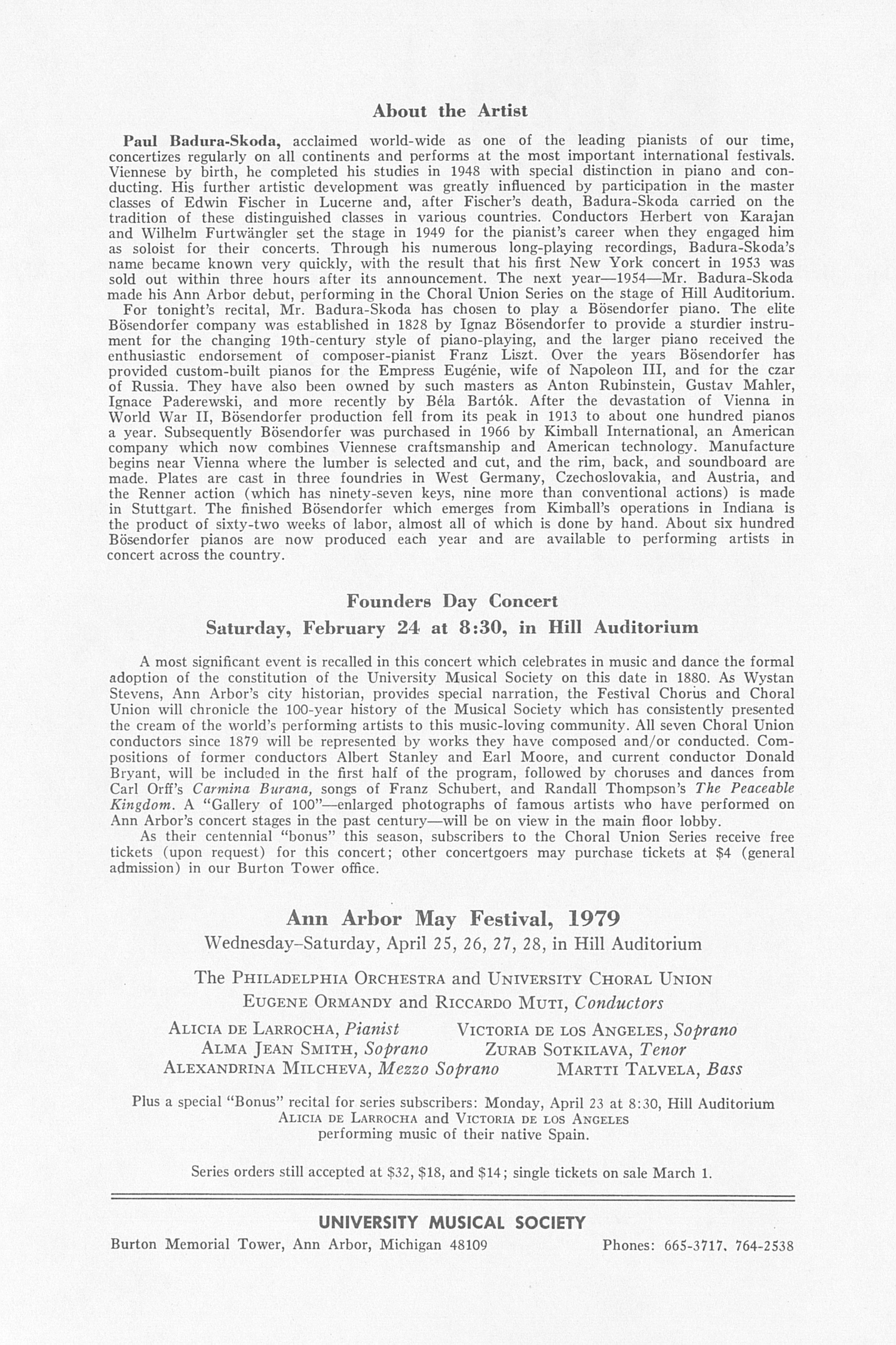 THE UNIVERSITY MUSICAL SOCIETY OF THE UNIVERSITY OF MICHIGAN
Paul BaduraSkoda
Pianist
Friday Evening, February 9, 1979, at 8:30 Rackham Auditorium, Ann Arbor, Michigan
PROGRAM
Partita No. 2 in C minor, BWV 826..........Bach
Sinfonia Sarabande
Allemande Rondeau
Courante Capriccio
Sonata No. 32 in C minor, Op. Ill........Beethoven
Maestoso--allegro con brio ed appassionata Arietta: adagio molto semplice e cantabile
INTERMISSION
Atzenbrugger Tanze, 1821...........Schubert
Fantasia n C major, Op. IS ("Wanderer").......Schubert
Allegro Andantino
Scherzo: allegro vivace Rondo: allegretto
BASF, Westminster, Vox, Supraphon, London, RCA Red Seal, and Musical Heritage Society Records.
Centennial Season--Fortyeighth Concert
Debut and Encore Series
About the Artist
Paul BaduraSkoda, acclaimed worldwide as one of the leading pianists of our time, concertizes regularly on all continents and performs at the most important international festivals. Viennese by birth, he completed his studies in 1948 with special distinction in piano and con?ducting. His further artistic development was greatly influenced by participation in the master classes of Edwin Fischer in Lucerne and, after Fischer's death, BaduraSkoda carried on the tradition of these distinguished classes in various countries. Conductors Herbert von Karajan and Wilhelm Furtwiingler set the stage in 1949 for the pianist's career when they engaged him as soloist for their concerts. Through his numerous longplaying recordings, BaduraSkoda's name became known very quickly, with the result that his first New York concert in 1953 was sold out within three hours after its announcement. The next year--1954--Mr. BaduraSkoda made his Ann Arbor debut, performing in the Choral Union Scries on the stage of Hill Auditorium.
For tonight's recital, Mr. BaduraSkoda has chosen to play a Bbsendorfer piano. The elite Bosendorfer company was established in 1828 by Ignaz Bosendorfer to provide a sturdier instru?ment for the changing 19thcentury style of pianoplaying, and the larger piano received the enthusiastic endorsement of composerpianist Franz Liszt. Over the years Bosendorfer has provided custombuilt pianos for the Empress Eugenie, wife of Napoleon III, and for the czar of Russia. They have also been owned by such masters as Anton Rubinstein, Gustav Mahler, Ignace Paderewski, and more recently by Bela Bartok. After the devastation of Vienna in World War II, Bosendorfer production fell from its peak in 1913 to about one hundred pianos a year. Subsequently Bosendorfer was purchased in 1966 by Kimball International, an American company which now combines Viennese craftsmanship and American technology. Manufacture begins near Vienna where the lumber is selected and cut, and the rim, back, and soundboard are made. Plates are cast in three foundries in West Germany, Czechoslovakia, and Austria, and the Renner action (which has ninetyseven keys, nine more than conventional actions) is made in Stuttgart. The finished Bosendorfer which emerges from Kimball's operations in Indiana is the product of sixtytwo weeks of labor, almost all of which is done by hand. About six hundred Bbsendorfer pianos are now produced each year and are available to performing artists in concert across the country.
Founders Day Concert Saturday, February 24 at 8:30, in Hill Auditorium
A most significant event is recalled in this concert which celebrates in music and dance the formal adoption of the constitution of the University Musical Society on this date in 1880. As Wystan Stevens, Ann Arbor's city historian, provides special narration, the Festival Chorus and Choral Union will chronicle the 100year history of the Musical Society which has consistently presented the cream of the world's performing artists to this musicloving community. All seven Choral Union conductors since 1879 will be represented by works they have composed andor conducted. Com?positions of former conductors Albert Stanley and Earl Moore, and current conductor Donald Bryant, will be included in the first half of the program, followed by choruses and dances from Carl Orff's Carmina Burana, songs of Franz Schubert, and Randall Thompson's The Peaceable Kingdom. A "Gallery of 100"--enlarged photographs of famous artists who have performed on Ann Arbor's concert stages in the past century--will be on view in the main floor lobby.
As their centennial "bonus" this season, subscribers to the Choral Union Series receive free tickets (upon request) for this concert; other concertgoers may purchase tickets at $4 (general admission) in our Burton Tower office.
Ann Arbor May Festival, 1979
WednesdaySaturday, April 25, 26, 27, 28, in Hill Auditorium
The Philadelphia Orchestra and University Choral Union Eugene Ormandy and Riccardo Muti, Conductors
Alicia de Larrocha, Pianist Victoria de los Angeles, Soprano
Alma Jean Smith, Soprano Zurab Sotkilava, Tenor
Alexandrina Milcheva, Mezzo Soprano Martti Talvela, Bass
Plus a special "Bonus" recital for series subscribers: Monday, April 23 at 8:30, Hill Auditorium
Alicia de Larrocha and Victoria de los Angeles
performing music of their native Spain.
Series orders still accepted at $32, $18, and $14; single tickets on sale March 1.
UNIVERSITY MUSICAL SOCIETY
Burton Memorial Tower, Ann Arbor, Michigan 48109 Phones: 6653717. 7642538