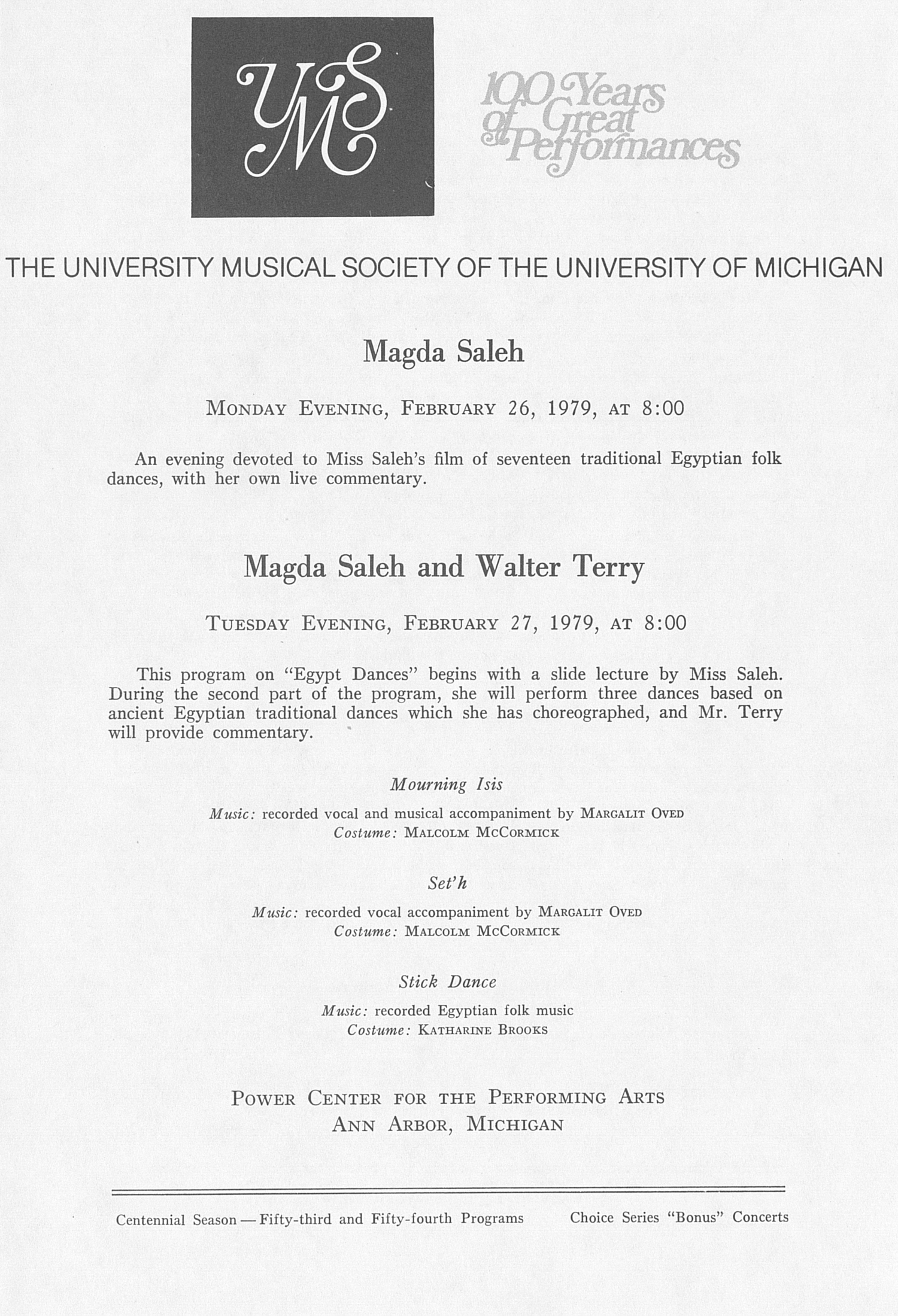 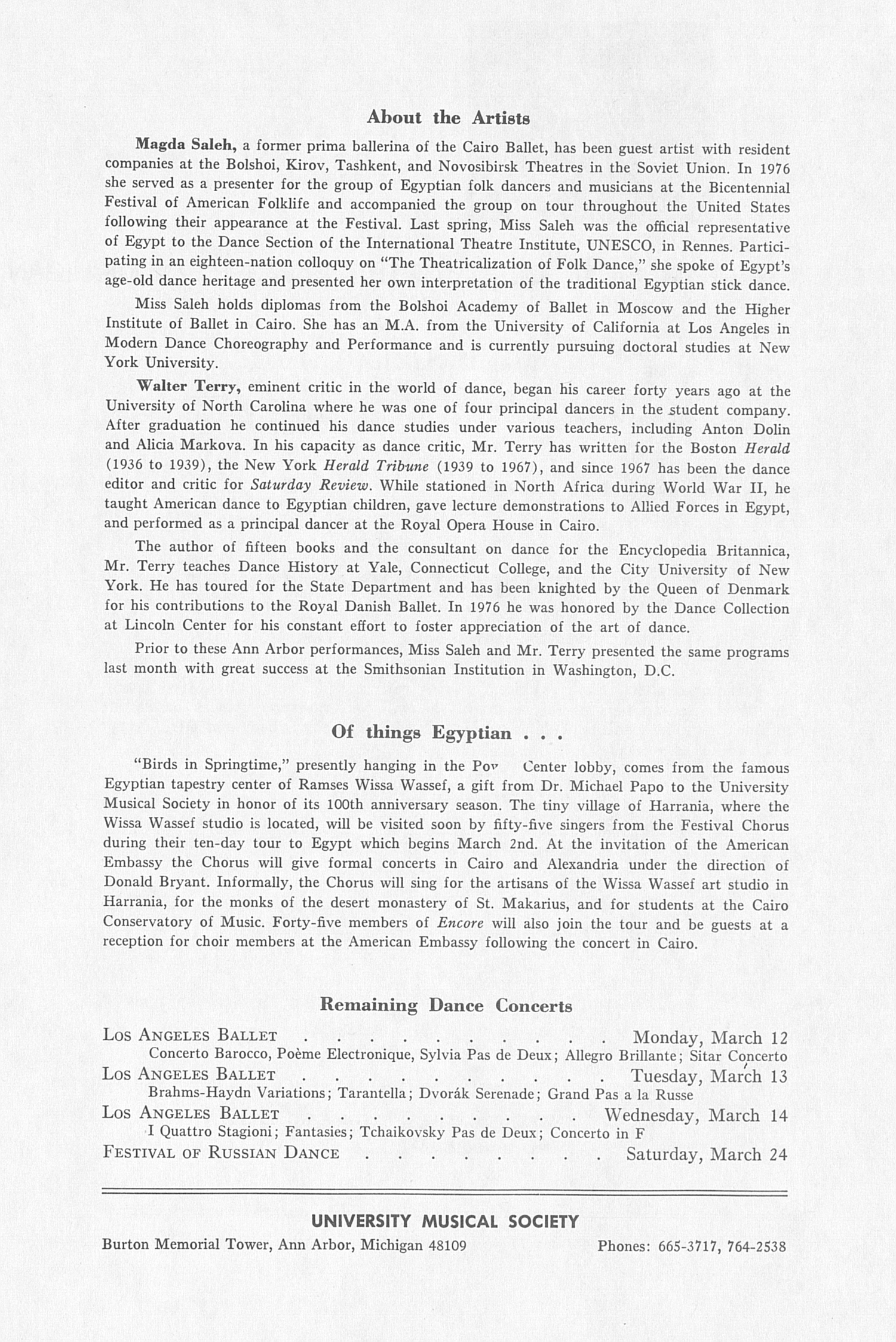 THE UNIVERSITY MUSICAL SOCIETY OF THE UNIVERSITY OF MICHIGAN
Magda Saleh
Monday Evening, February 26, 1979, at 8:00
An evening devoted to Miss Saleh's film of seventeen traditional Egyptian folk dances, with her own live commentary.
Magda Saleh and Walter Terry
Tuesday Evening, February 27, 1979, at 8:00
This program on "Egypt Dances" begins with a slide lecture by Miss Saleh. During the second part of the program, she will perform three dances based on ancient Egyptian traditional dances which she has choreographed, and Mr. Terry will provide commentary.
Mourning Isis
Music: recorded vocal and musical accompaniment by Mahgalit Oved Costume: Malcolm McCormick
Set'h
Music: recorded vocal accompaniment by Marcalit Oved Costume: Malcolm McCormick
Stick Dance
Music: recorded Egyptian folk music Costume: Katharine Brooks
Power Center for the Performing Arts Ann Arbor, Michigan
Centennial Season -Fiftythird and Fiftyfourth Programs Choice Series "Bonus" Concerts
About the Artists
Magda Saleh, a former prima ballerina of the Cairo Ballet, has been guest artist with resident companies at the Bolshoi, Kirov, Tashkent, and Novosibirsk Theatres in the Soviet Union. In 1976 she served as a presenter for the group of Egyptian folk dancers and musicians at the Bicentennial Festival of American Folklife and accompanied the group on tour throughout the United States following their appearance at the Festival. Last spring, Miss Saleh was the official representative of Egypt to the Dance Section of the International Theatre Institute, UNESCO, in Rennes. Partici?pating in an eighteennation colloquy on "The Theatricalization of Folk Dance," she spoke of Egypt's ageold dance heritage and presented her own interpretation of the traditional Egyptian stick dance.
Miss Saleh holds diplomas from the Bolshoi Academy of Ballet in Moscow and the Higher Institute of Ballet in Cairo. She has an M.A. from the University of California at Los Angeles in Modern Dance Choreography and Performance and is currently pursuing doctoral studies at New York University.
Walter Terry, eminent critic in the world of dance, began his career forty years ago at the University of North Carolina where he was one of four principal dancers in the student company. After graduation he continued his dance studies under various teachers, including Anton Dolin and Alicia Markova. In his capacity as dance critic, Mr. Terry has written for the Boston Herald (1936 to 1939), the New York Herald Tribune (1939 to 1967), and since 1967 has been the dance editor and critic for Saturday Review. While stationed in North Africa during World War II, he taught American dance to Egyptian children, gave lecture demonstrations to Allied Forces in Egypt, and performed as a principal dancer at the Royal Opera House in Cairo.
The author of fifteen books and the consultant on dance for the Encyclopedia Britannica, Mr. Terry teaches Dance History at Yale, Connecticut College, and the City University of New York. He has toured for the State Department and has been knighted by the Queen of Denmark for his contributions to the Royal Danish Ballet. In 1976 he was honored by the Dance Collection at Lincoln Center for his constant effort to foster appreciation of the art of dance.
Prior to these Ann Arbor performances, Miss Saleh and Mr. Terry presented the same programs last month with great success at the Smithsonian Institution in Washington, D.C.
Of things Egyptian . . .
"Birds in Springtime," presently hanging in the Pov Center lobby, comes from the famous Egyptian tapestry center of Ramses Wissa Wassef, a gift from Dr. Michael Papo to the University Musical Society in honor of its 100th anniversary season. The tiny village of Harrania, where the Wissa Wassef studio is located, will be visited soon by fiftyfive singers from the Festival Chorus during their tenday tour to Egypt which begins March 2nd. At the invitation of the American Embassy the Chorus will give formal concerts in Cairo and Alexandria under the direction of Donald Bryant. Informally, the Chorus will sing for the artisans of the Wissa Wassef art studio in Harrania, for the monks of the desert monastery of St. Makarius, and for students at the Cairo Conservatory of Music. Fortyfive members of Encore will also join the tour and be guests at a reception for choir members at the American Embassy following the concert in Cairo.
Remaining Dance Concerts
Los Angeles Ballet..........Monday, March 12
Concerto Barocco, Poeme Electronique, Sylvia Pas de Deux; Allegro Brillante; Sitar Concerto
Los Angeles Ballet..........Tuesday, March 13
BrahmsHaydn Variations; Tarantella; Dvorak Serenade; Grand Pas a la Russe
Los Angeles Ballet.........Wednesday, March 14
I Quattro Stagioni; Fantasies; Tchaikovsky Pas de Deux; Concerto in F
Festival of Russian Dance........Saturday, March 24
UNIVERSITY MUSICAL SOCIETY
Burton Memorial Tower, Ann Arbor, Michigan 48109 Phones: 6653717, 7642538