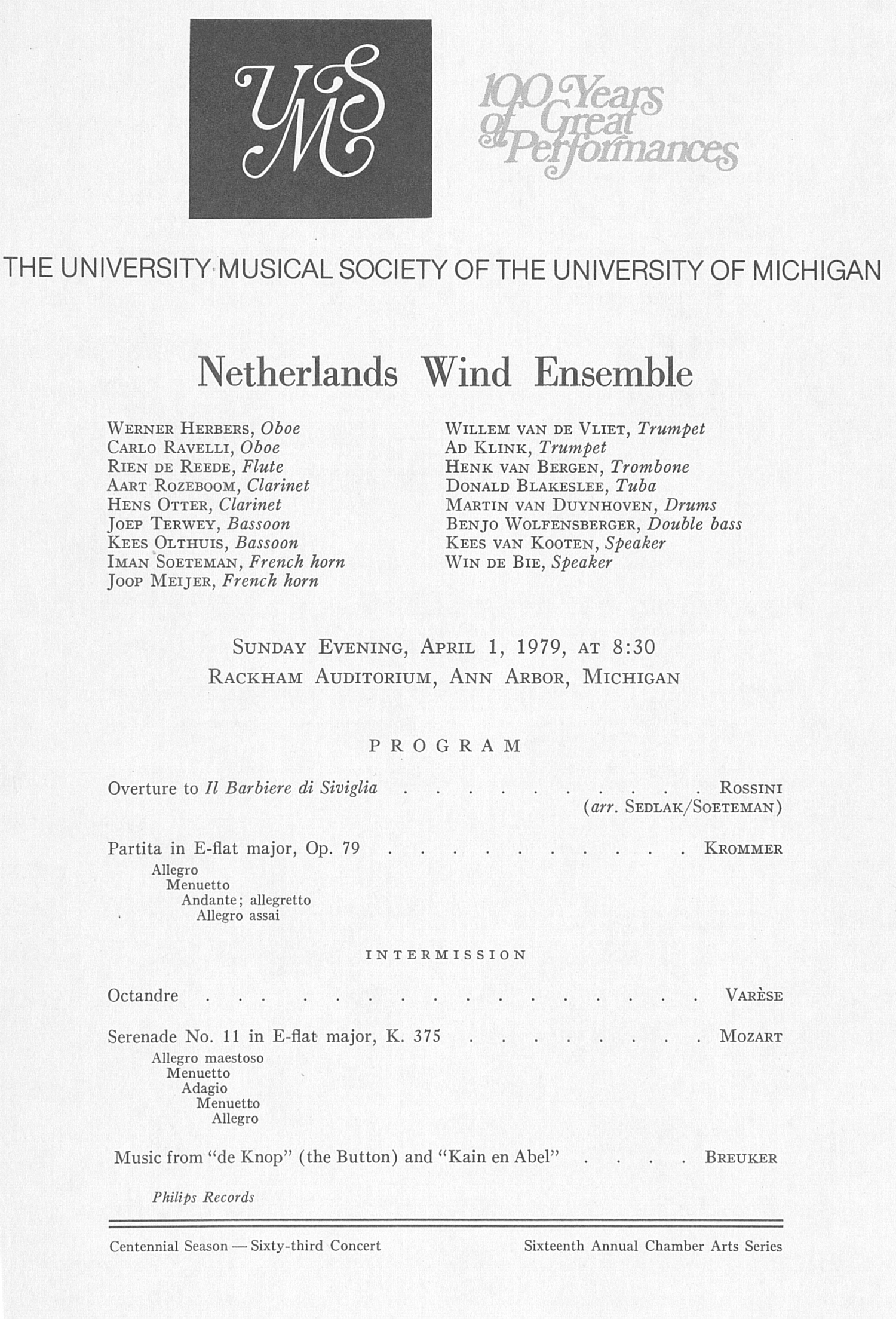 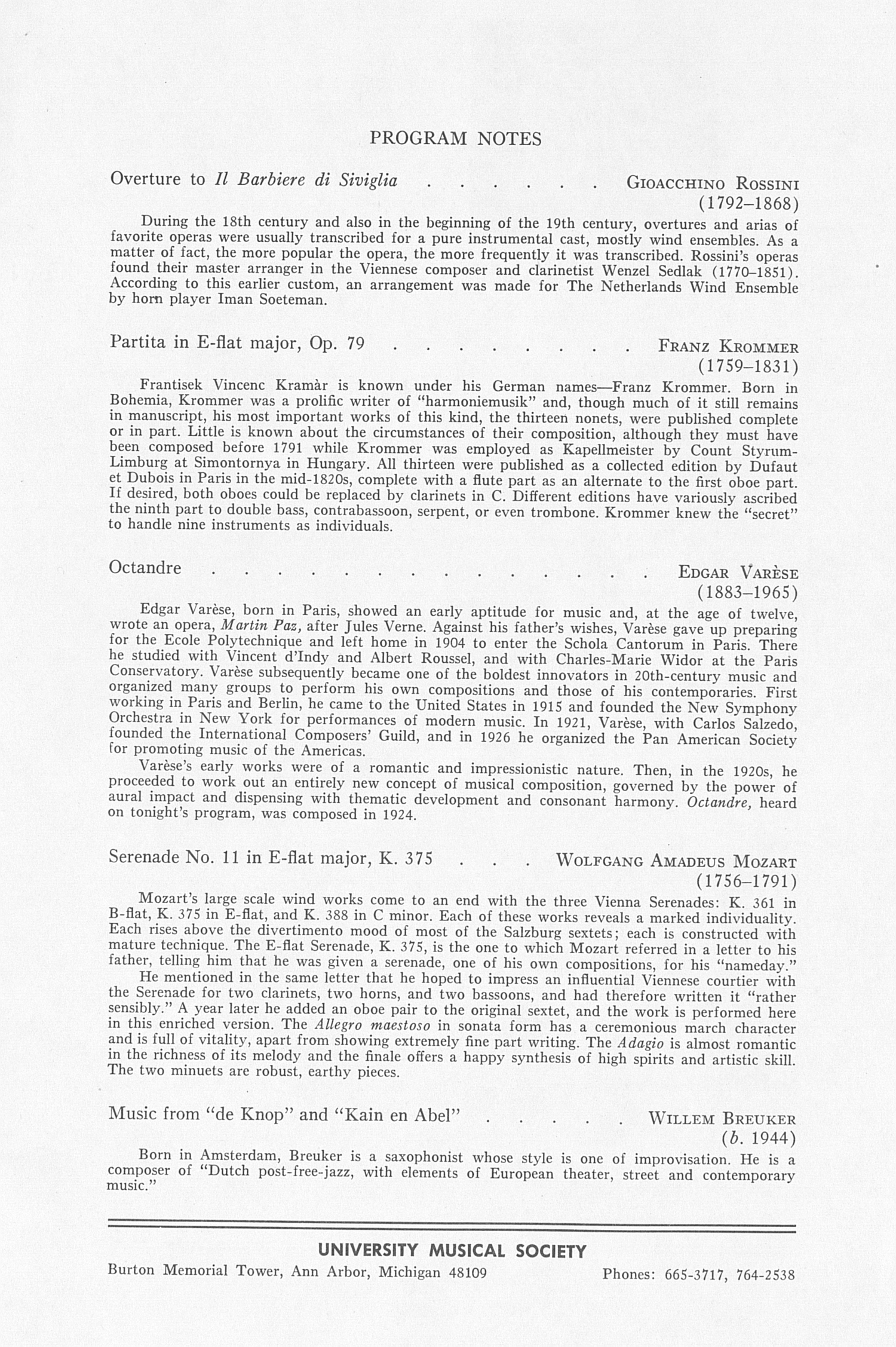 THE UNIVERSITY MUSICAL SOCIETY OF THE UNIVERSITY OF MICHIGAN
Netherlands Wind Ensemble
Werner Herbers, Oboe Willem van de Vliet, Trumpet
Carlo Ravelli, Oboe Ad Klink, Trumpet
Rien de Reede, Flute Henk van Bergen, Trombone
Aart Rozeboom, Clarinet Donald Blakeslee, Tuba
Hens Otter, Clarinet Martin van Duynhoven, Drums
Joep Terwey, Bassoon Benjo Wolfensberger, Double bass
Kees Olthuis, Bassoon Kees van Kooten, Speaker
Iman Soeteman, French horn Win de Bie, Speaker
Joop Meijer, French horn
Sunday Evening, April 1, 1979, at 8:30 Rackham Auditorium, Ann Arbor, Michigan
PROGRAM
Overture to Barbiere di Siviglia..........Rossini
(arr. SedlakSoeteman)
Partita in Eflat major, Op. 79..........Krommer
Allegro Menuetto
Andante; allegretto Allegro assai
INTERMISSION
Octandre................Varese
Serenade No. 11 in Eflat major, K. 375........Mozart
Allegro maestoso Menuetto Adagio Menuetto Allegro
Music from "de Knop" (the Button) and "Kain en Abel" .... Breuker Philips Records
Centennial Season -Sixtythird Concert Sixteenth Annual Chamber Arts Series
PROGRAM NOTES
Overture to Barbiere di Siviglia......Gioacchino Rossini
(17921868)
During the 18th century and also in the beginning of the 19th century, overtures and arias of favorite operas were usually transcribed for a pure instrumental cast, mostly wind ensembles. As a matter of fact, the more popular the opera, the more frequently it was transcribed. Rossini's operas found their master arranger in the Viennese composer and clarinetist Wenzel Sedlak (177O18S1). According to this earlier custom, an arrangement was made for The Netherlands Wind Ensemble by hom player Iman Soeteman.
Partita in Eflat major, Op. 79........Franz Krommer
(17591831)
Frantisek Vincenc Kramar is known under his German names--Franz Krommer. Born in Bohemia, Krommer was a prolific writer of "harmoniemusik" and, though much of it still remains in manuscript, his most important works of this kind, the thirteen nonets, were published complete or in part. Little is known about the circumstances of their composition, although they must have been composed before 1791 while Krommer was employed as Kapellmeister by Count StyrumLimburg at Simontornya in Hungary. All thirteen were published as a collected edition by Dufaut et Dubois in Paris in the mid182Os, complete with a flute part as an alternate to the first oboe part. If desired, both oboes could be replaced by clarinets in C. Different editions have variously ascribed the ninth part to double bass, contrabassoon, serpent, or even trombone. Krommer knew the "secret" to handle nine instruments as individuals.
Octandre..............Edgar Varese
(18831965)
Edgar Varese, born in Paris, showed an early aptitude for music and, at the age of twelve, wrote an opera, Martin Paz, after Jules Verne. Against his father's wishes, Varese gave up preparing for the Ecole Polytechnique and left home in 1904 to enter the Schola Cantorum in Paris. There he studied with Vincent d'Indy and Albert Roussel, and with CharlesMarie Widor at the Paris Conservatory. Varese subsequently became one of the boldest innovators in 20thcentury music and organized many groups to perform his own compositions and those of his contemporaries. First working in Paris and Berlin, he came to the United States in 1915 and founded the New Symphony Orchestra in New York for performances of modern music. In 1921, Varese, with Carlos Salzedo, founded the International Composers' Guild, and in 1926 he organized the Pan American Society for promoting music of the Americas.
Varese's early works were of a romantic and impressionistic nature. Then, in the 1920s, he proceeded to work out an entirely new concept of musical composition, governed by the power of aural impact and dispensing with thematic development and consonant harmony. Octandre, heard on tonight's program, was composed in 1924.
Serenade No. 11 in Eflat major, K. 375 . . . Wolfgang Amadeus Mozart
(17561791)
Mozart's large scale wind works come to an end with the three Vienna Serenades: K. 361 in Bflat, K. 375 in Eflat, and K. 388 in C minor. Each of these works reveals a marked individuality. Each rises above the divertimento mood of most of the Salzburg sextets; each is constructed with mature technique. The Eflat Serenade, K. 375, is the one to which Mozart referred in a letter to his father, telling him that he was given a serenade, one of his own compositions, for his "nameday."
He mentioned in the same letter that he hoped to impress an influential Viennese courtier with the Serenade for two clarinets, two horns, and two bassoons, and had therefore written it "rather sensibly." A year later he added an oboe pair to the original sextet, and the work is performed here in this enriched version. The Allegro maestoso in sonata form has a ceremonious march character and is full of vitality, apart from showing extremely fine part writing. The Adagio is almost romantic in the richness of its melody and the finale offers a happy synthesis of high spirits and artistic skill. The two minuets arc robust, earthy pieces.
Music from "de Knop" and "Kain en Abel".....Willem Breuker
(b. 1944)
Born in Amsterdam, Breuker is a saxophonist whose style is one of improvisation. He is a composer of "Dutch postfreejazz, with elements of European theater, street and contemporary music."
UNIVERSITY MUSICAL SOCIETY
Burton Memorial Tower, Ann Arbor, Michigan 48109 Phones: 6653717, 7642538