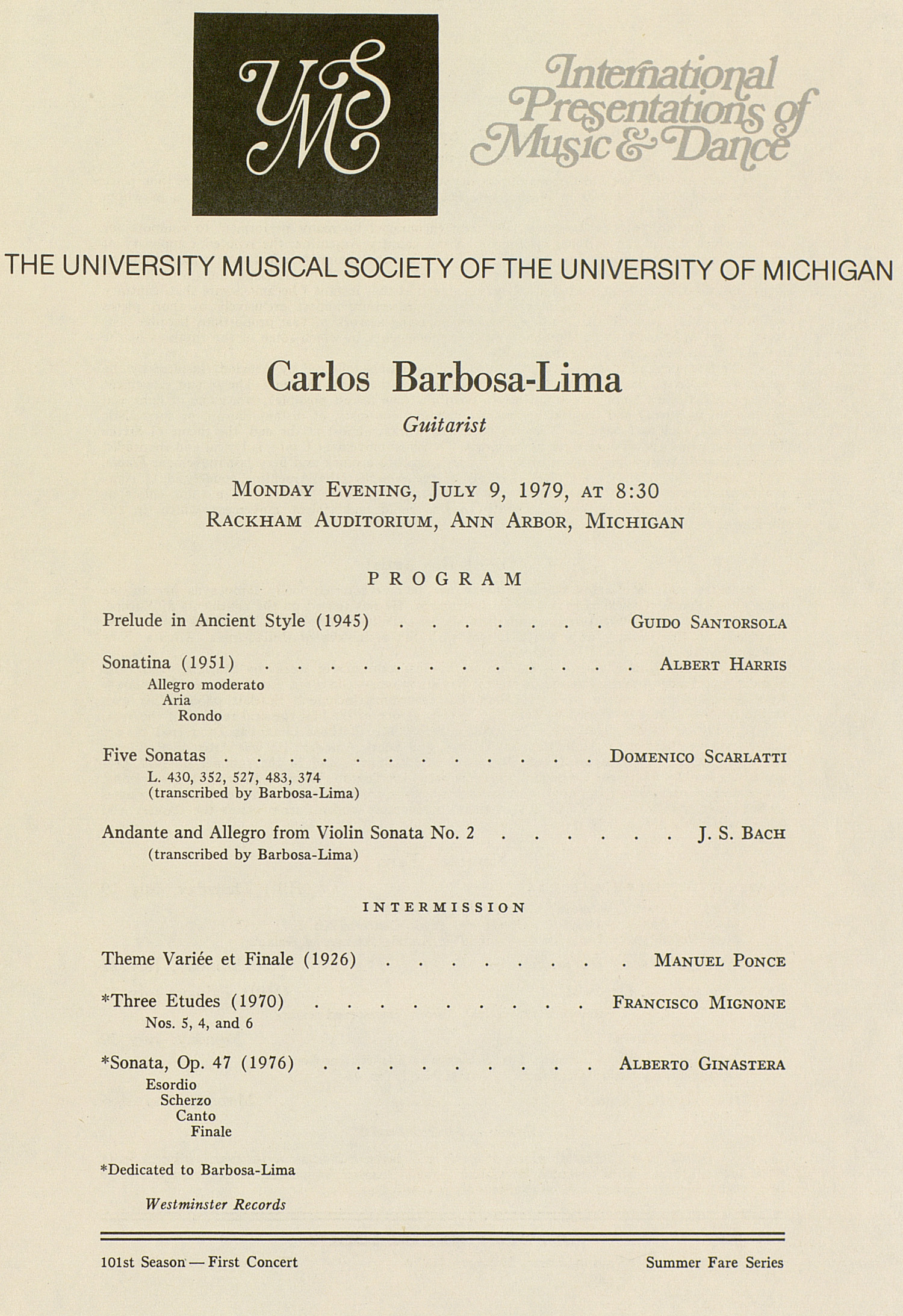 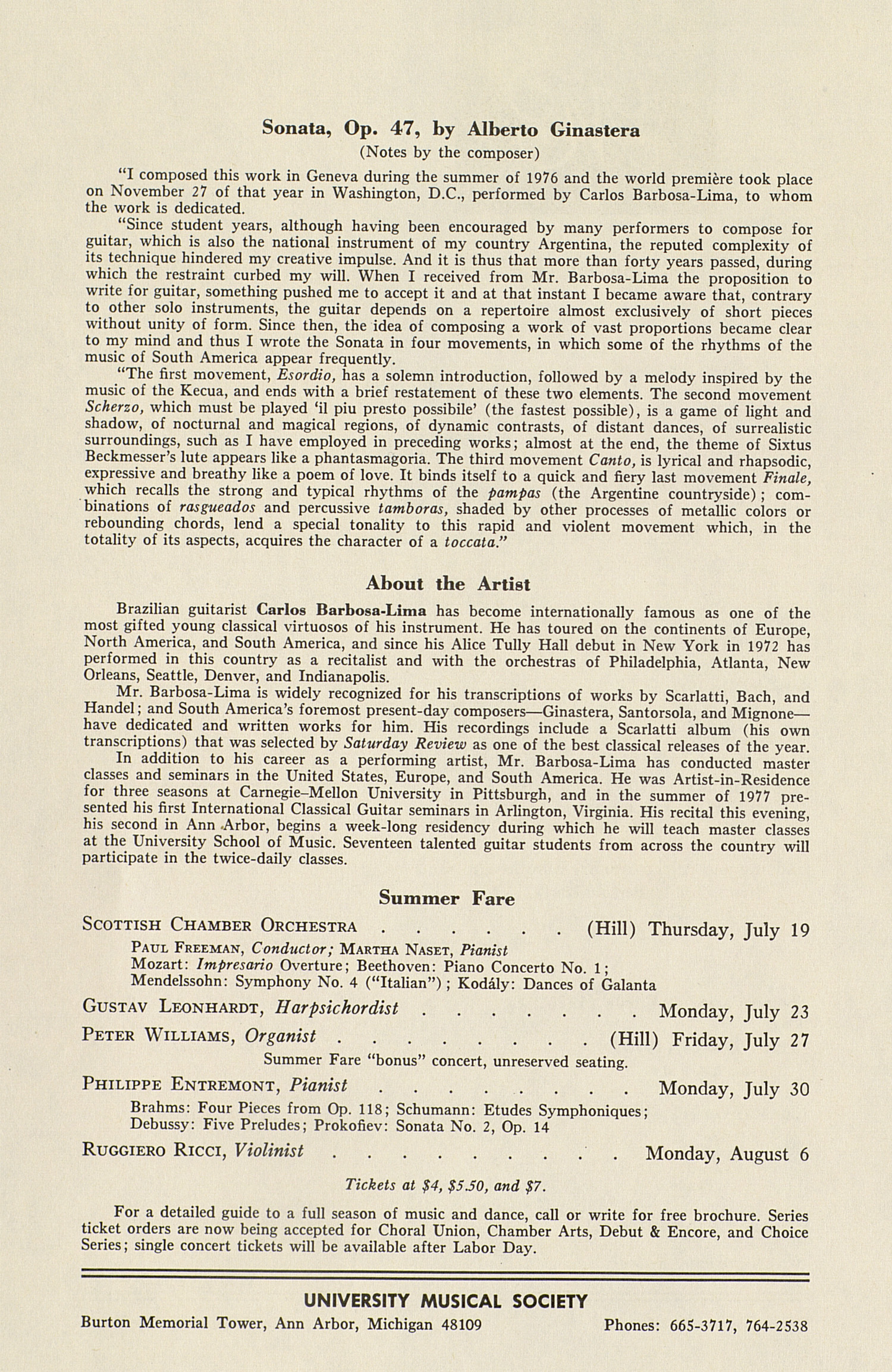 THE UNIVERSITY MUSICAL SOCIETY OF THE UNIVERSITY OF MICHIGAN
Carlos Barbosa-Lima
Guitarist
Monday Evening, July 9, 1979, at 8:30 Rackham Auditorium, Ann Arbor, Michigan
PROGRAM
Prelude in Ancient Style (1945).......Guido Santorsola
Sonatina (1951)............Albert Harris
Allegro moderato Aria Rondo
Five Sonatas............Domenico Scarlatti
L. 430, 352, 527, 483, 374 (transcribed by Barbosa-Lima)
Andante and Allegro from Violin Sonata No. 2......J. S. Bach
(transcribed by Barbosa-Lima)
INTERMISSION
Theme Variee et Finale (1926)........Manuel Ponce
?Three Etudes (1970).........Francisco Mignone
Nos. 5, 4, and 6
?Sonata, Op. 47 (1976).........Alberto Ginastera
Esordio Scherzo Canto Finale
?Dedicated to Barbosa-Lima Westminster Records
101st Season -First Concert Summer Fare Series
Sonata, Op. 47, by Alberto Ginastera
(Notes by the composer)
"I composed this work in Geneva during the summer of 1976 and the world premiere took place on November 27 of that year in Washington, D.C., performed by Carlos Barbosa-Lima, to whom the work is dedicated.
"Since student years, although having been encouraged by many performers to compose for guitar, which is also the national instrument of my country Argentina, the reputed complexity of its technique hindered my creative impulse. And it is thus that more than forty years passed, during which the restraint curbed my will. When I received from Mr. Barbosa-Lima the proposition to write for guitar, something pushed me to accept it and at that instant I became aware that, contrary to other solo instruments, the guitar depends on a repertoire almost exclusively of short pieces without unity of form. Since then, the idea of composing a work of vast proportions became clear to my mind and thus I wrote the Sonata in four movements, in which some of the rhythms of the music of South America appear frequently.
"The first movement, Esordio, has a solemn introduction, followed by a melody inspired by the music of the Kecua, and ends with a brief restatement of these two elements. The second movement Scherzo, which must be played 'il piu presto possibile' (the fastest possible), is a game of light and shadow, of nocturnal and magical regions, of dynamic contrasts, of distant dances, of surrealistic surroundings, such as I have employed in preceding works; almost at the end, the theme of Sixtus Beckmesser's lute appears like a phantasmagoria. The third movement Canto, is lyrical and rhapsodic, expressive and breathy like a poem of love. It binds itself to a quick and fiery last movement Finale, which recalls the strong and typical rhythms of the pampas (the Argentine countryside) ; com?binations of rasgueados and percussive tamboras, shaded by other processes of metallic colors or rebounding chords, lend a special tonality to this rapid and violent movement which, in the totality of its aspects, acquires the character of a toccata."
About the Artist
Brazilian guitarist Carlos Barbosa-Litna has become internationally famous as one of the most gifted young classical virtuosos of his instrument. He has toured on the continents of Europe, North America, and South America, and since his Alice Tully Hall debut in New York in 1972 has performed in this country as a recitalist and with the orchestras of Philadelphia, Atlanta, New Orleans, Seattle, Denver, and Indianapolis.
Mr. Barbosa-Lima is widely recognized for his transcriptions of works by Scarlatti, Bach, and Handel; and South America's foremost present-day composers--Ginastera, Santorsola, and Mignone-have dedicated and written works for him. His recordings include a Scarlatti album (his own transcriptions) that was selected by Saturday Review as one of the best classical releases of the year.
In addition to his career as a performing artist, Mr. Barbosa-Lima has conducted master classes and seminars in the United States, Europe, and South America. He was Artist-in-Residence for three seasons at Carnegie-Mellon University in Pittsburgh, and in the summer of 1977 pre?sented his first International Classical Guitar seminars in Arlington, Virginia. His recital this evening, his second in Ann .Arbor, begins a week-long residency during which he will teach master classes at the University School of Music. Seventeen talented guitar students from across the country will participate in the twice-daily classes.
Summer Fare
Scottish Chamber Orchestra......(Hill) Thursday, July 19
Paul Freeman, Conductor; Martha Naset, Pianist
Mozart: Impresario Overture; Beethoven: Piano Concerto No. 1;
Mendelssohn: Symphony No. 4 ("Italian"); Kodaly: Dances of Galanta
Gustav Leonhardt, Harpsichordist.......Monday, July 23
Peter Williams, Organist........(Hill) Friday, July 27
Summer Fare "bonus" concert, unreserved seating. Philippe Entremont, Pianist........Monday, July 30
Brahms: Four Pieces from Op. 118; Schumann: Etudes Symphoniques; Debussy: Five Preludes; Prokofiev: Sonata No. 2, Op. 14
Ruggiero Ricci, Violinist......... Monday, August 6
Tickets at $4, $5 JO, and $7.
For a detailed guide to a full season of music and dance, call or write for free brochure. Series ticket orders are now being accepted for Choral Union, Chamber Arts, Debut & Encore, and Choice Series; single concert tickets will be available after Labor Day.
UNIVERSITY MUSICAL SOCIETY
Burton Memorial Tower, Ann Arbor, Michigan 48109 Phones: 665-3717, 764-2538