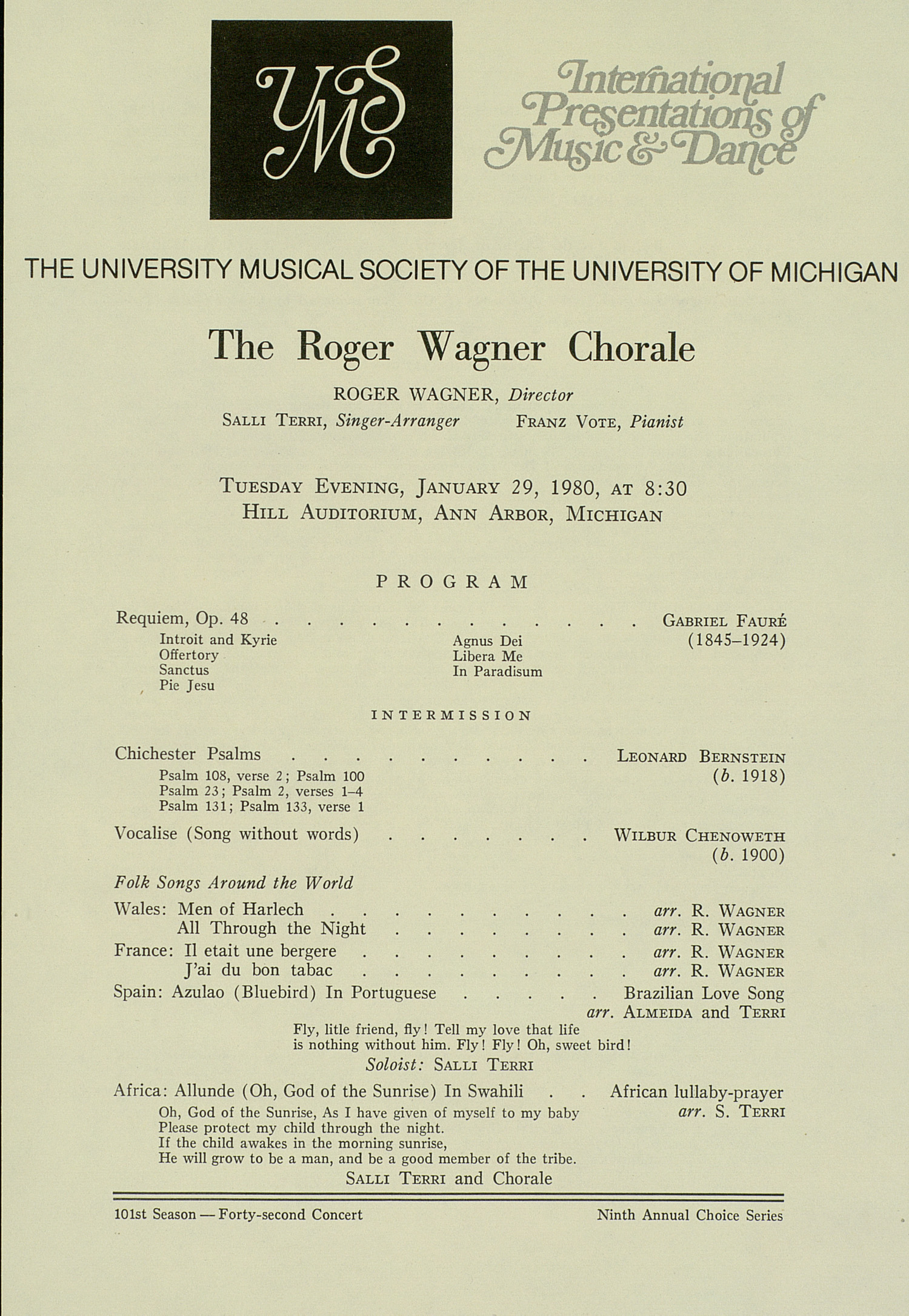 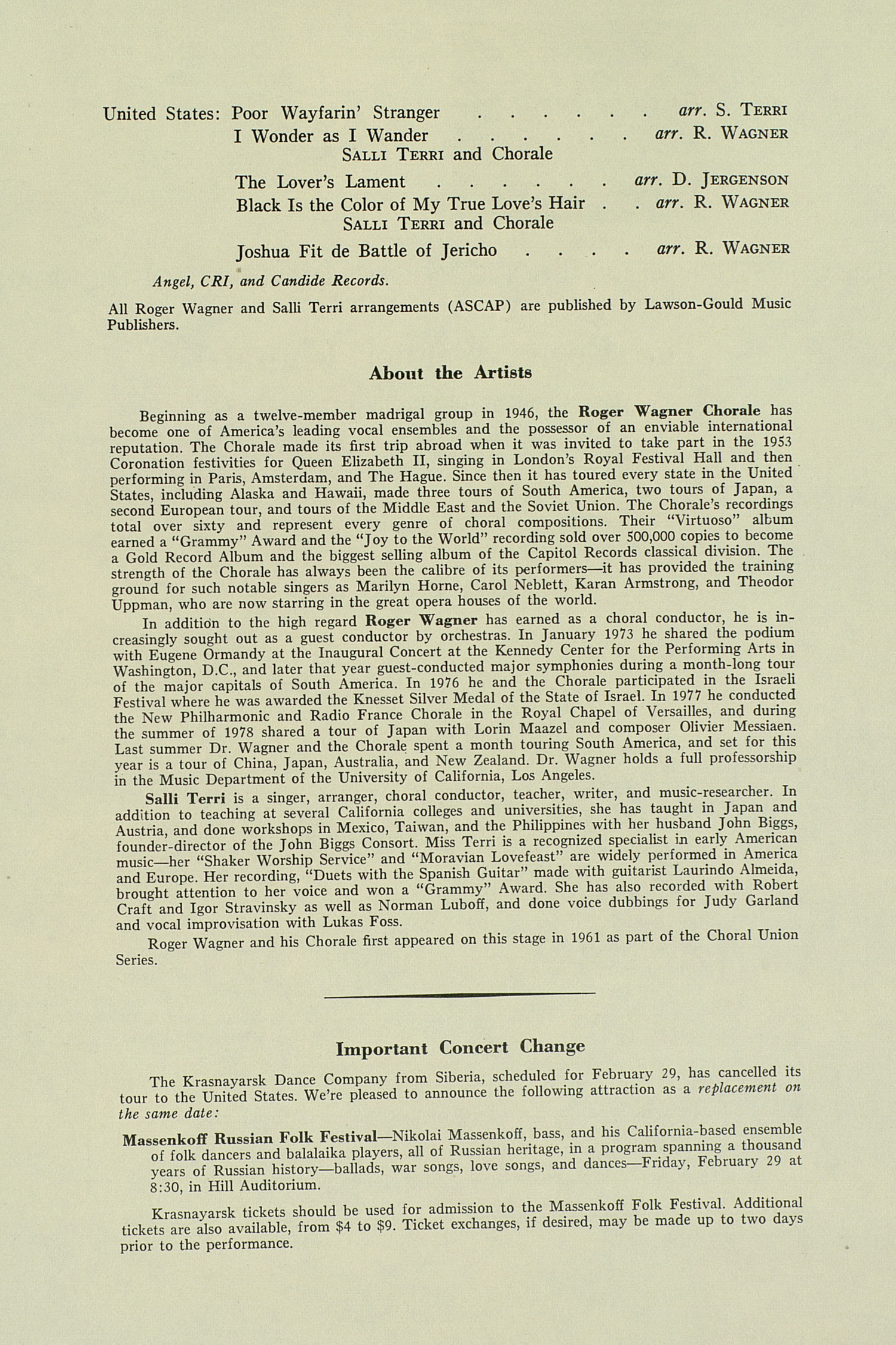 3bi1ediational
THE UNIVERSITY MUSICAL SOCIETY OF THE UNIVERSITY OF MICHIGAN
The Roger Wagner Chorale
ROGER WAGNER, Director Salli Terri, Singer-Arranger Franz Vote, Pianist
Tuesday Evening, January 29, 1980, at 8:30 Hill Auditorium, Ann Arbor, Michigan
PROGRAM
Requiem, Op. 48............Gabriel Faure
Introit and Kyrie Agnus Dei (1845-1924)
Offertory Libera Me
Sanctus In Paradisum
Pie Jesu
INTERMISSION
Chichester Psalms..........Leonard Bernstein
Psalm 108, verse 2; Psalm 100 (b. 1918)
Psalm 23; Psalm 2, verses 1-4 Psalm 131; Psalm 133, verse 1
Vocalise (Song without words).......Wilbur Chenoweth
(b. 1900)
Folk Songs Around the World
Wales: Men of Harlech..........arr. R. Wagner
All Through the Night........arr. R. Wagner
France: II etait une bergere.........arr. R. Wagner
J'ai du bon tabac.........arr. R. Wagner
Spain: Azulao (Bluebird) In Portuguese.....Brazilian Love Song
arr. Almeida and Terri Fly, litle friend, fly! Tell my love that life is nothing without him. Fly! Fly! Oh, sweet bird!
Soloist: Salli Terri
Africa: Allunde (Oh, God of the Sunrise) In Swahili . . African lullaby-prayer Oh, God of the Sunrise, As I have given of myself to my baby arr. S. Terri
Please protect my child through the night. If the child awakes in the morning sunrise, He will grow to be a man, and be a good member of the tribe.
Salli Terri and Chorale 101st Season -Forty-second Concert Ninth Annual Choice Series
United States: Poor Wayfarin' Stranger......arr. S. Terei
I Wonder as I Wander......arr. R. Wagner
Salli Terri and Chorale
The Lover's Lament......arr. D. Jergenson
Black Is the Color of My True Love's Hair . . arr. R. Wagner Salli Terri and Chorale
Joshua Fit de Battle of Jericho .... arr. R. Wagner Angel, CRI, and Candide Records.
All Roger Wagner and Salli Terri arrangements (ASCAP) are published by Lawson-Gould Music Publishers.
About the Artists
Beginning as a twelve-member madrigal group in 1946, the Roger Wagner Chorale has become one of America's leading vocal ensembles and the possessor of an enviable international reputation. The Chorale made its first trip abroad when it was invited to take part in the 1953 Coronation festivities for Queen Elizabeth II, singing in London's Royal Festival Hall and then performing in Paris, Amsterdam, and The Hague. Since then it has toured every state in the United States, including Alaska and Hawaii, made three tours of South America, two tours of Japan, a second European tour, and tours of the Middle East and the Soviet Union. The Chorale's recordings total over sixty and represent every genre of choral compositions. Their "Virtuoso" album earned a "Grammy" Award and the "Joy to the World" recording sold over 500,000 copies to become a Gold Record Album and the biggest selling album of the Capitol Records classical division. The strength of the Chorale has always been the calibre of its performers--it has provided the training ground for such notable singers as Marilyn Home, Carol Neblett, Karan Armstrong, and Theodor Uppman, who are now starring in the great opera houses of the world.
In addition to the high regard Roger Wagner has earned as a choral conductor, he is in?creasingly sought out as a guest conductor by orchestras. In January 1973 he shared the podium with Eugene Ormandy at the Inaugural Concert at the Kennedy Center for the Performing Arts in Washington, D.C., and later that year guest-conducted major symphonies during a month-long tour of the major capitals of South America. In 1976 he and the Chorale participated in the Israeli Festival where he was awarded the Knesset Silver Medal of the State of Israel. In 1977 he conducted the New Philharmonic and Radio France Chorale in the Royal Chapel of Versailles, and during the summer of 1978 shared a tour of Japan with Lorin Maazel and composer Olivier Messiaen. Last summer Dr. Wagner and the Chorale spent a month touring South America, and set for this year is a tour of China, Japan, Australia, and New Zealand. Dr. Wagner holds a full professorship in the Music Department of the University of California, Los Angeles.
Salli Terri is a singer, arranger, choral conductor, teacher, writer, and music-researcher. In addition to teaching at several California colleges and universities, she has taught in Japan and Austria, and done workshops in Mexico, Taiwan, and the Philippines with her husband John Biggs, founder-director of the John Biggs Consort. Miss Terri is a recognized specialist in early American music--her "Shaker Worship Service" and "Moravian Lovefeast" are widely performed in America and Europe. Her recording, "Duets with the Spanish Guitar" made with guitarist Laurindo Almeida, brought attention to her voice and won a "Grammy" Award. She has also recorded with Robert Craft and Igor Stravinsky as well as Norman Luboff, and done voice dubbings for Judy Garland and vocal improvisation with Lukas Foss.
Roger Wagner and his Chorale first appeared on this stage in 1961 as part of the Choral Union Series.
Important Concert Change
The Krasnayarsk Dance Company from Siberia, scheduled for February 29, has cancelled its tour to the United States. We're pleased to announce the following attraction as a replacement on the same date:
Massenkoff Russian Folk Festival--Nikolai Massenkoff, bass, and his California-based ensemble of folk dancers and balalaika players, all of Russian heritage, in a program spanning a thousand years of Russian history--ballads, war songs, love songs, and dances--Friday, February 29 at 8:30, in Hill Auditorium.
Krasnayarsk tickets should be used for admission to the Massenkoff Folk Festival. Additional tickets are also available, from $4 to 9. Ticket exchanges, if desired, may be made up to two days prior to the performance.