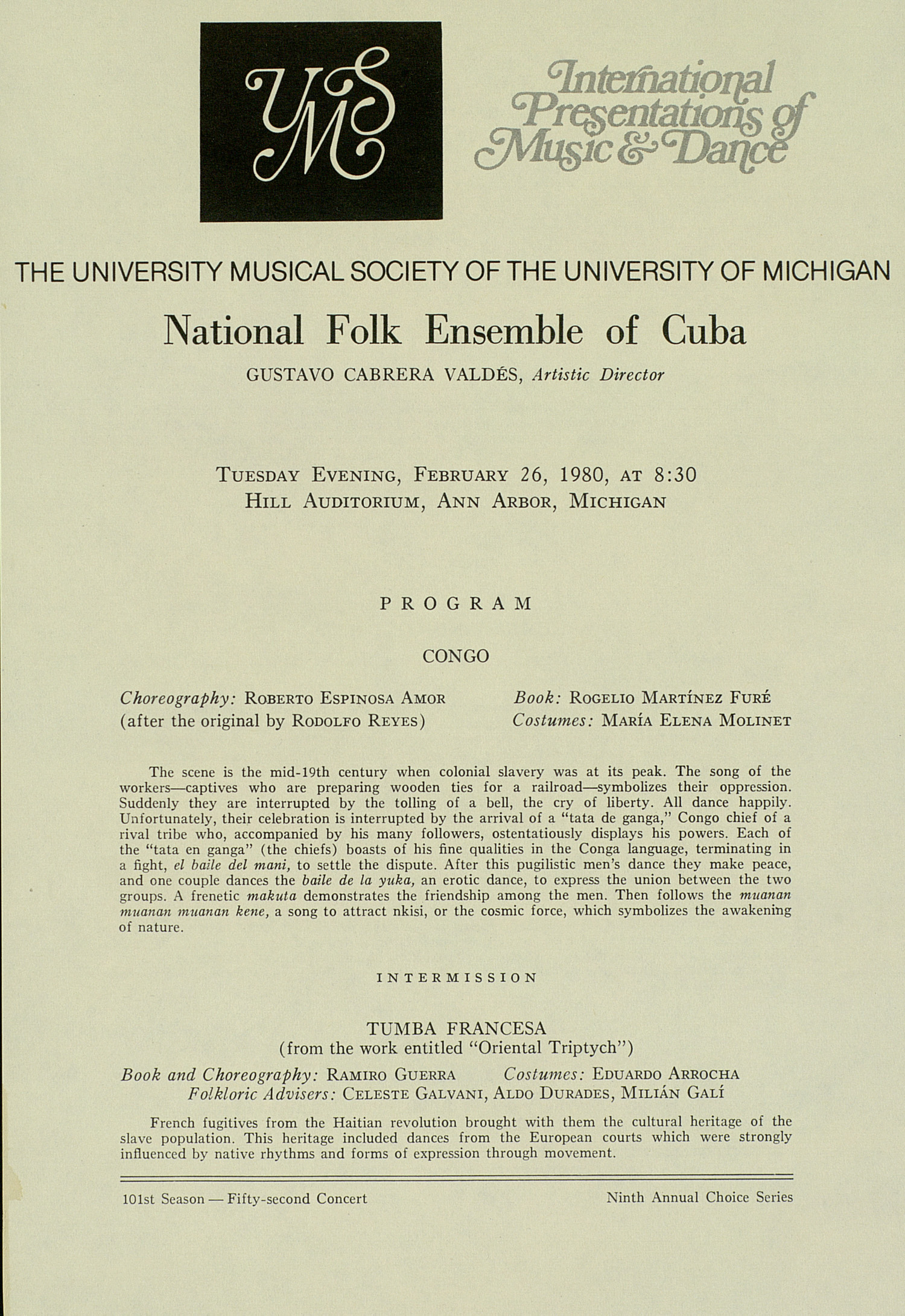 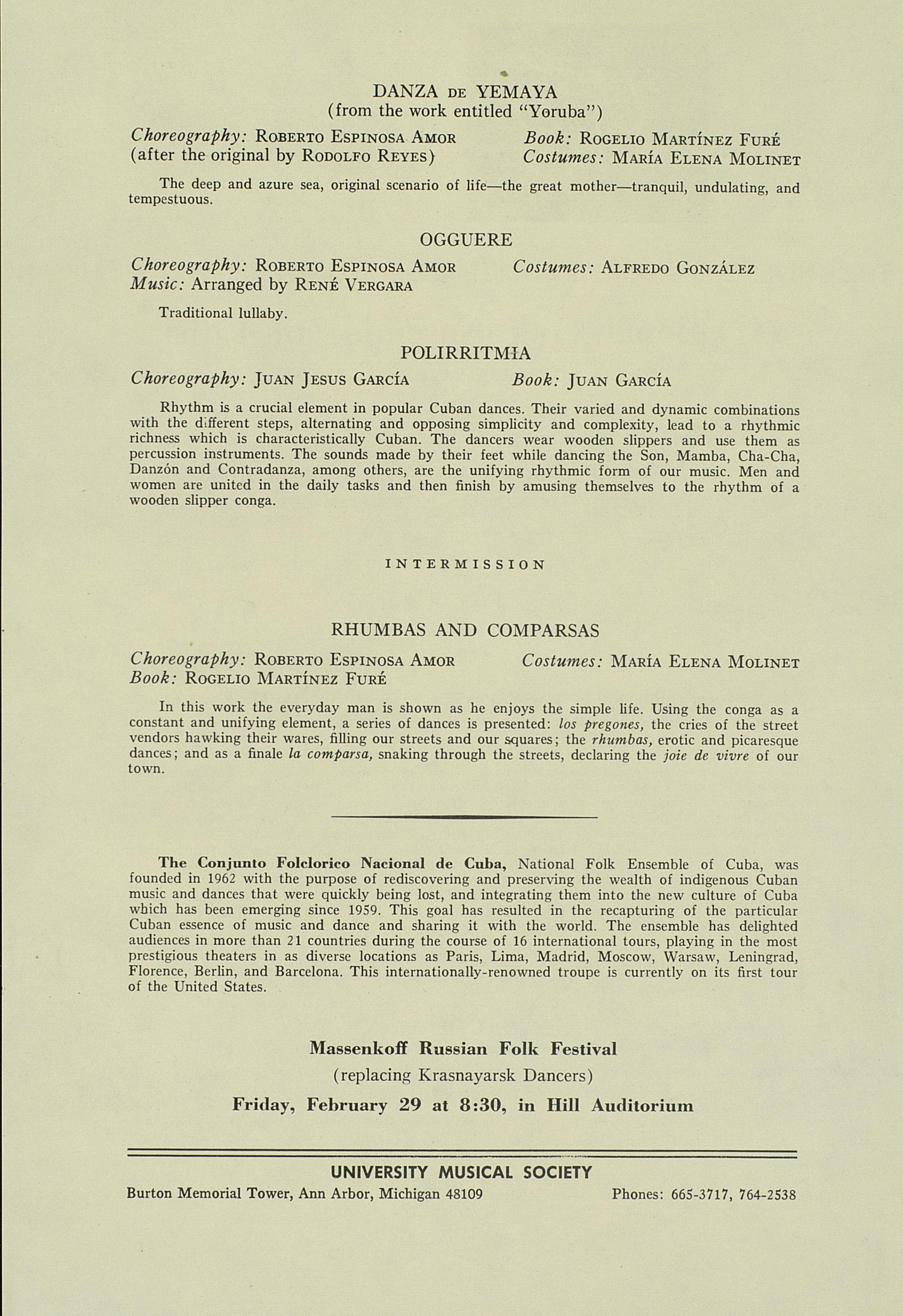 THE UNIVERSITY MUSICAL SOCIETY OF THE UNIVERSITY OF MICHIGAN
National Folk Ensemble of Cuba
GUSTAVO CABRERA VALDES, Artistic Director
Tuesday Evening, February 26, 1980, at 8:30 Hill Auditorium, Ann Arbor, Michigan
PROGRAM
CONGO
Choreography: Roberto Espinosa Amor Book: Rogelio Martinez Fure
(after the original by Rodolfo Reyes) Costumes: Maria Elena Molinet
The scene is the mid-19th century when colonial slavery was at its peak. The song of the workers--captives who are preparing wooden ties for a railroad--symbolizes their oppression. Suddenly they are interrupted by the tolling of a bell, the cry of liberty. All dance happily. Unfortunately, their celebration is interrupted by the arrival of a "tata de ganga," Congo chief of a rival tribe who, accompanied by his many followers, ostentatiously displays his powers. Each of the "tata en ganga" (the chiefs) boasts of his fine qualities in the Conga language, terminating in a fight, el baile del mani, to settle the dispute. After this pugilistic men's dance they make peace, and one couple dances the baile de la yuka, an erotic dance, to express the union between the two groups. A frenetic makula demonstrates the friendship among the men. Then follows the muanan muanan muanan kene, a song to attract nkisi, or the cosmic force, which symbolizes the awakening of nature.
INTERMISSION
TUMBA FRANCESA (from the work entitled "Oriental Triptych")
Book and Choreography: Ramiro Guerra Costumes: Eduardo Arrocha
Folkloric Advisers: Celeste Galvani, Aldo Durades, Milian Gali
French fugitives from the Haitian revolution brought with them the cultural heritage of the slave population. This heritage included dances from the European courts which were strongly influenced by native rhythms and forms of expression through movement.
101st Season -Fifty-second Concert Ninth Annual Choice Series
DANZA de YEMAYA (from the work entitled "Yoruba")
Choreography: Roberto Espinosa Amor Book: Rogelio Martinez Fure
(after the original by Rodolfo Reyes) Costumes: Maria Elena Molinet
The deep and azure sea, original scenario of life--the great mother--tranquil, undulating, and tempestuous.
OGGUERE
Choreography: Roberto Espinosa Amor Costumes: Alfredo Gonzalez
Music: Arranged by Rene Vergara
Traditional lullaby.
POLIRRITMIA Choreography: Juan Jesus Garcia Book: Juan Garcia
Rhythm is a crucial element in popular Cuban dances. Their varied and dynamic combinations with the different steps, alternating and opposing simplicity and complexity, lead to a rhythmic richness which is characteristically Cuban. The dancers wear wooden slippers and use them as percussion instruments. The sounds made by their feet while dancing the Son, Mamba, Cha-Cha, Danzon and Contradanza, among others, are the unifying rhythmic form of our music. Men and women are united in the daily tasks and then finish by amusing themselves to the rhythm of a wooden slipper conga.
INTERMISSION
RHUMBAS AND COMPARSAS
Choreography: Roberto Espinosa Amor Costumes: Maria Elena Molinet
Book: Rogelio Martinez Fure
In this work the everyday man is shown as he enjoys the simple life. Using the conga as a constant and unifying element, a series of dances is presented: los pregones, the cries of the street vendors hawking their wares, filling our streets and our squares; the rhumbas, erotic and picaresque dances; and as a finale la comparsa, snaking through the streets, declaring the joie de vivre of our town.
The Conjunto Folclorico Nacional de Cuba, National Folk Ensemble of Cuba, was founded in 1962 with the purpose of rediscovering and preserving the wealth of indigenous Cuban music and dances that were quickly being lost, and integrating them into the new culture of Cuba which has been emerging since 1959. This goal has resulted in the recapturing of the particular Cuban essence of music and dance and sharing it with the world. The ensemble has delighted audiences in more than 21 countries during the course of 16 international tours, playing in the most prestigious theaters in as diverse locations as Paris, Lima, Madrid, Moscow, Warsaw, Leningrad, Florence, Berlin, and Barcelona. This internationally-renowned troupe is currently on its first tour of the United States.
Massenkoff Russian Folk Festival
(replacing Krasnayarsk Dancers) Friday, February 29 at 8:30, in Hill Auditorium
UNIVERSITY MUSICAL SOCIETY
Burton Memorial Tower, Ann Arbor, Michigan 48109 Phones: 665-3717, 764-2538