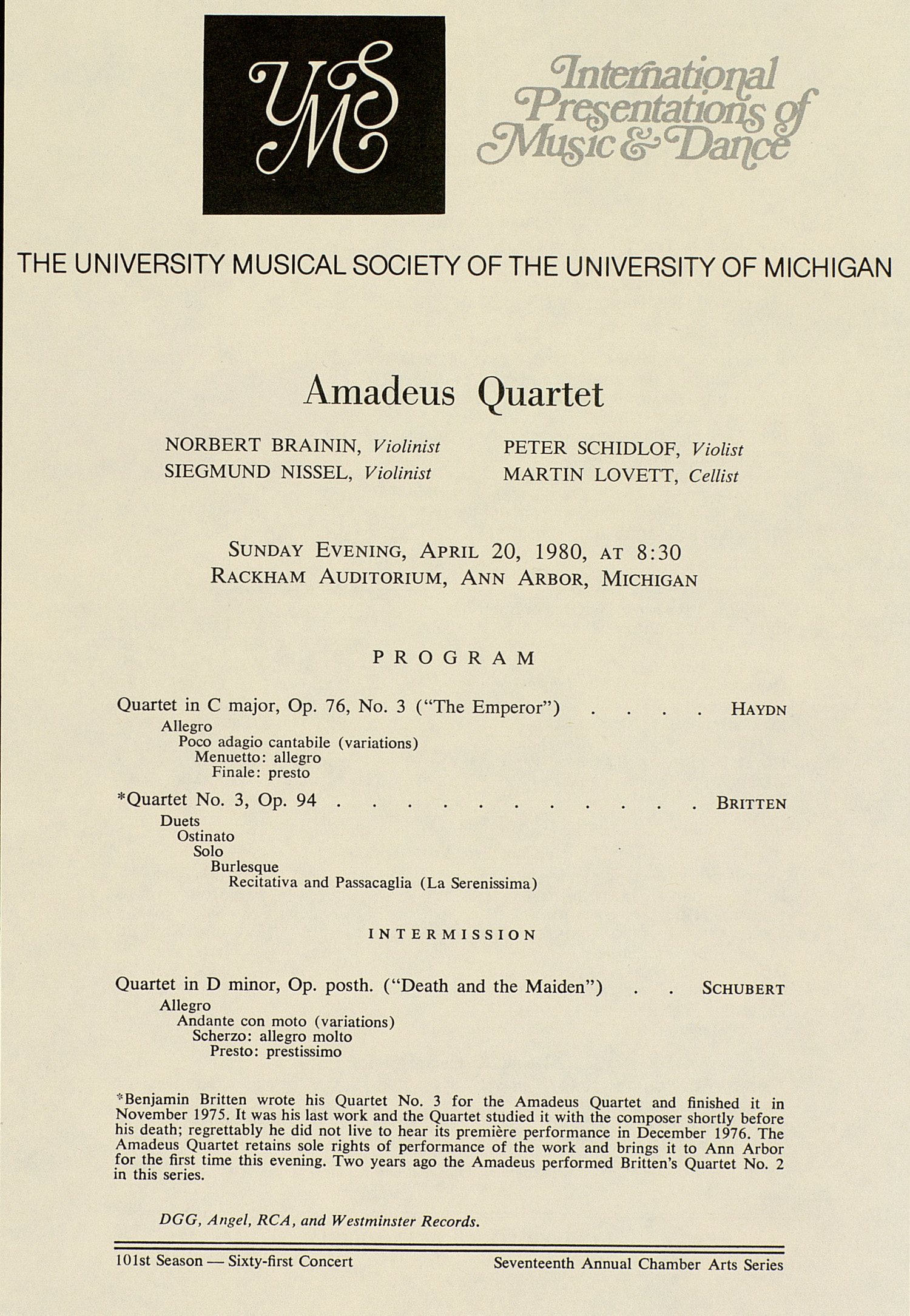 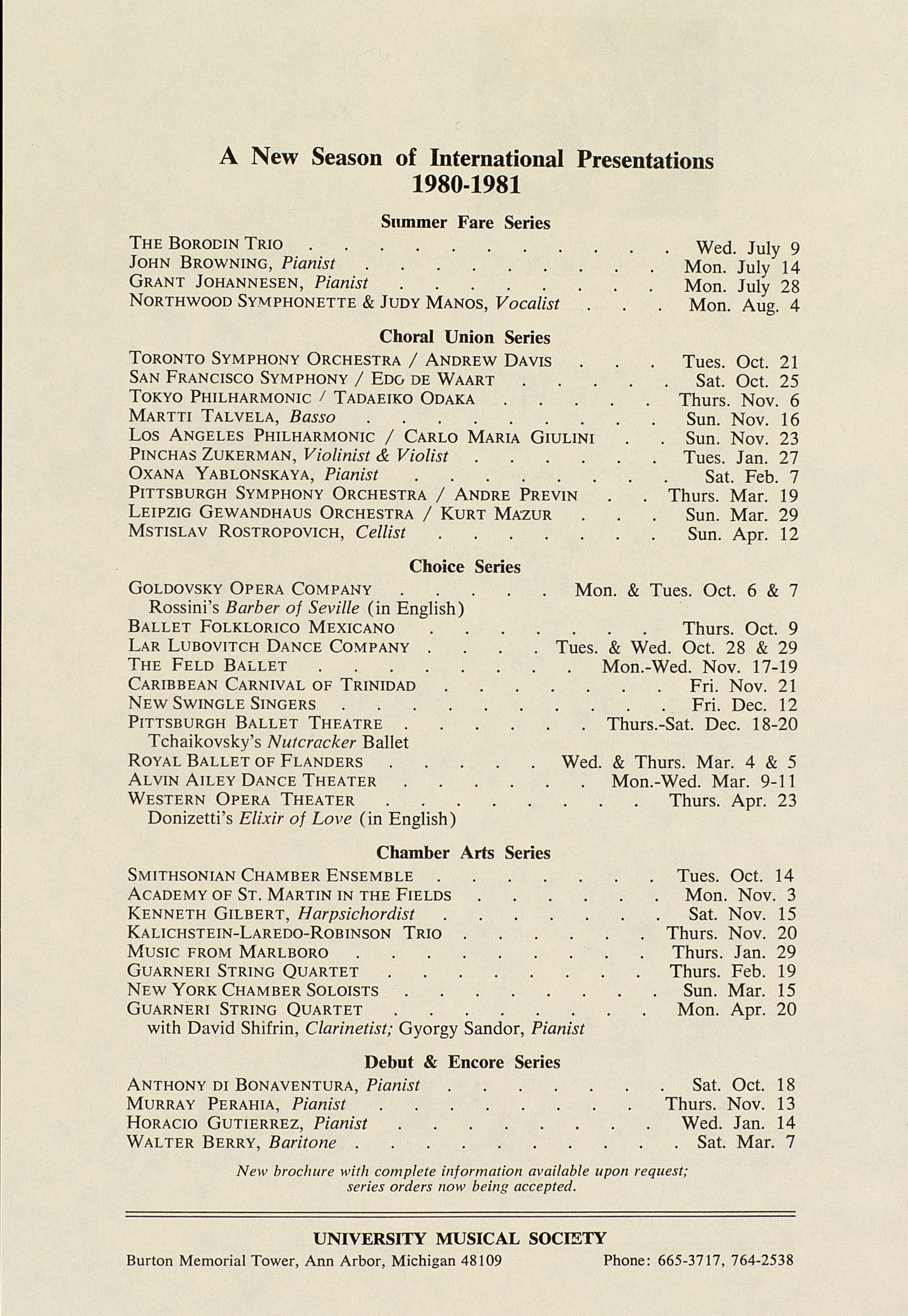 Sixty-second
PROGRAM NOTES by Richard Freed
Leonore Overture No. 3, Op. 72a .... Ludwig van Beethoven
(1770-1827)
While a Rossini or a Donizetti might compose as many as four operas in a single year, Beethoven spent more than a decade creating his single work for the lyric stage and revising it into the form in which we know it today. In the matter of the overture, he turned the tables on Rossini, who sometimes used the same overture for as many as three different operas, by com?posing no fewer than four overtures for his Fidelio.
Beethoven originally titled his opera Leonore (as Pierre Gaveaux and Ferdinando Paer had called their earlier operatic treatments of the same story). When the original three-act version was produced on November 20, 1805, he had already discarded his first attempt at an overture (the Leonore No. 1, which may not have been finished by then and was not heard until nine years after his death) and substituted one nearly twice as long, known now as Leonore No. 2. This was also to be set aside. When the first revision of the opera was presented, only four months after the original premiere (but now in two acts instead of three), the overture had been trimmed and tightened into the Leonore No. 3. When the third and final version was presented under the title Fidelio, on May 23, 1814, Beethoven was not ready with a new over?ture and so used the one from his ballet The Creatures of Prometheus; three days later the production was repeated with the overture in E major known ever since simply as the Fidelio Overture, and the three Leonore overtures (all in C major) have taken their places in the concert repertory.
The Leonore Overture No. 3, by all odds the most frequently heard, is a concise tone poem far in advance of the genre "invented" by Liszt, and well in advance, too, of the descriptive overtures of Mendelssohn. The prisoner's song, Florestan"s air ("In des Lebens Fruhlingstagen"), is indeed the only material quoted from the opera itself, except the dramatic trumpet calls-first far-off, then nearer--announcing the arrival of the Minister of Justice, which here lead to the triumphant coda.
Concerto in D major for Violin and Orchestra, Op. 61 . . . Beethoven
Beethoven did not compose a full-scale concerto for the violin until he had completed all the concertos he wrote for his own use (the first four of his five piano concertos) and the Triple Concerto, Op. 56, which he styled a "Concertino" and in which the violin shared solo honors with the cello and piano. It would appear that he worked up to his solitary violin concerto by way of a series of other concerted works for the instrument. In 1800 he began sketching a violin concerto in C major, but he never completed even the single movement he laid out. In 1802 and 1803 there came the two Romances for violin and orchestra which may be considered "studies" for the slow movement of a concerto, and in 1805 Beethoven produced the afore?mentioned Triple Concerto. When the Violin Concerto in D materialized, the following year, it stood as a work of unprecedented proportions and depth in its category. While all of Beet?hoven's piano concertos, to some degree, can trace their ancestry to Mozart's, the Violin Concerto has no ancestors. This exalted and eminently lovable work sprang from Beethoven's genius like Athena from the head of Zeus, fully formed, and as near as any product of man's imagination is likely to come to the elusive goal of perfection.
The first performance, on December 23, 1806, was entrusted to Franz Clement, a dis?tinguished musician who was associated with Beethoven in several important performances in his capacity as concertmaster of the orchestra of the Theater an der Wien. But the Concerto did not catch on at once, and a few months after the premiere Beethoven allowed Muzio Clementi to persuade him to adapt the work as a piano concerto; for this version, which is rarely performed, he wrote cadenzas, which happened to be the first he composed for any of his own concertos. He never wrote any for the violin version, but proceeded thereafter to supply his earlier piano concertos with cadenzas, and when he wrote the last (the so-called Emperor, in E-flat) he provided it at the outset with cadenzas so integrated that they were not to be replaced.
Evidently the Violin Concerto was not performed again after the premiere until I.uigi Tomasini (Haydn's former concertmaster at Eszterhaza, and himself a composer) played it in 1812. Few other violinists gave the work a nod--Baillot in 1828, Vieuxtemps, ten years after that. It was not until the 13-year-old Joseph Joachim played the Concerto in his London debut on May 27, 1844, that the work took hold. (The conductor on that occasion was Felix Mendelssohn, who composed his own Violin Concerto in E minor in the same year.) Even after that, though, Joachim was for several years virtually the only violinist to perform the Beethoven Concerto with any frequency. He became the most illustrious violinist of his time, and an eminent conductor, composer and pedagogue as well; he also composed cadenzas for the Concerto, as have Fritz Kreisler and Nathan Milstein.