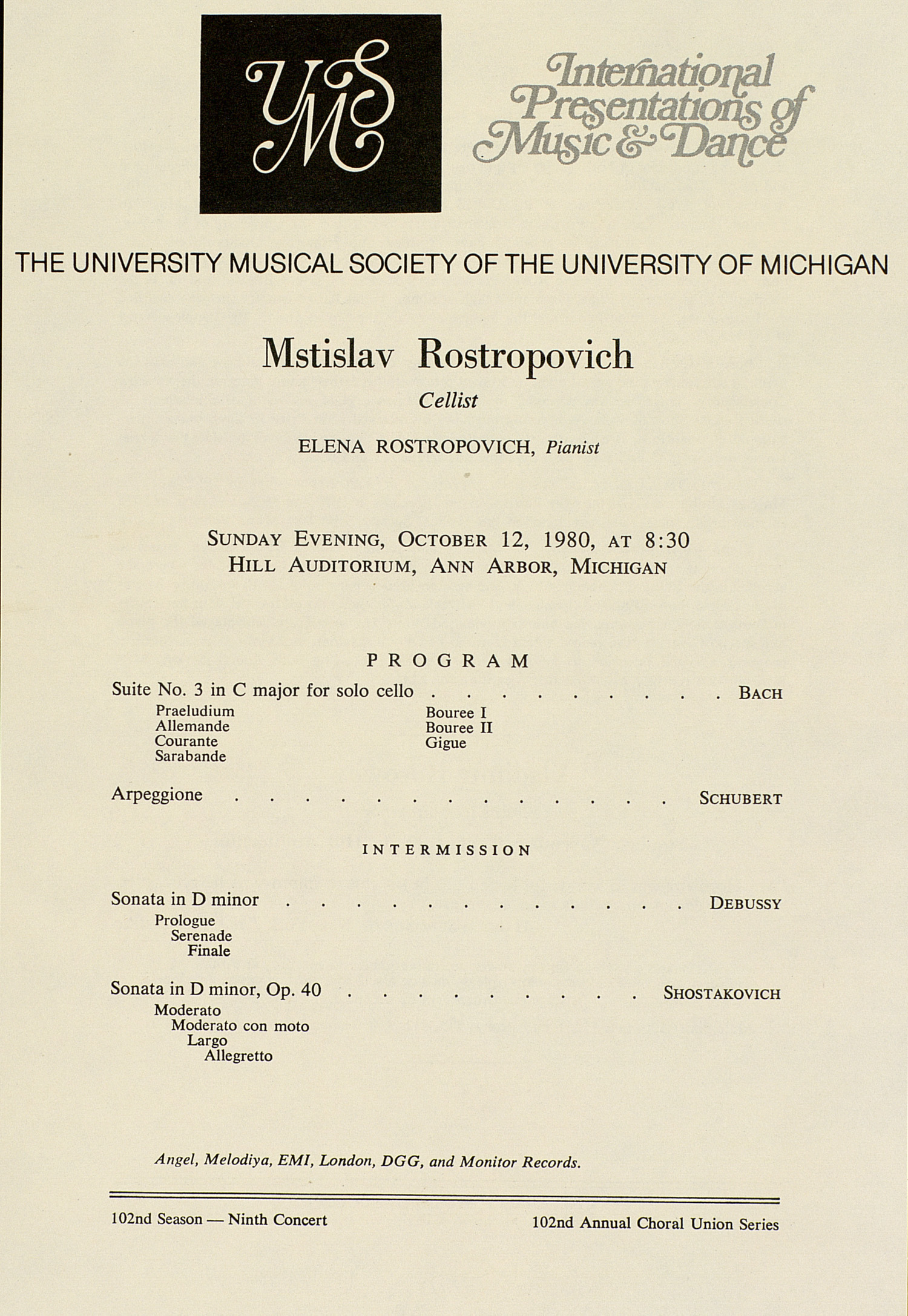 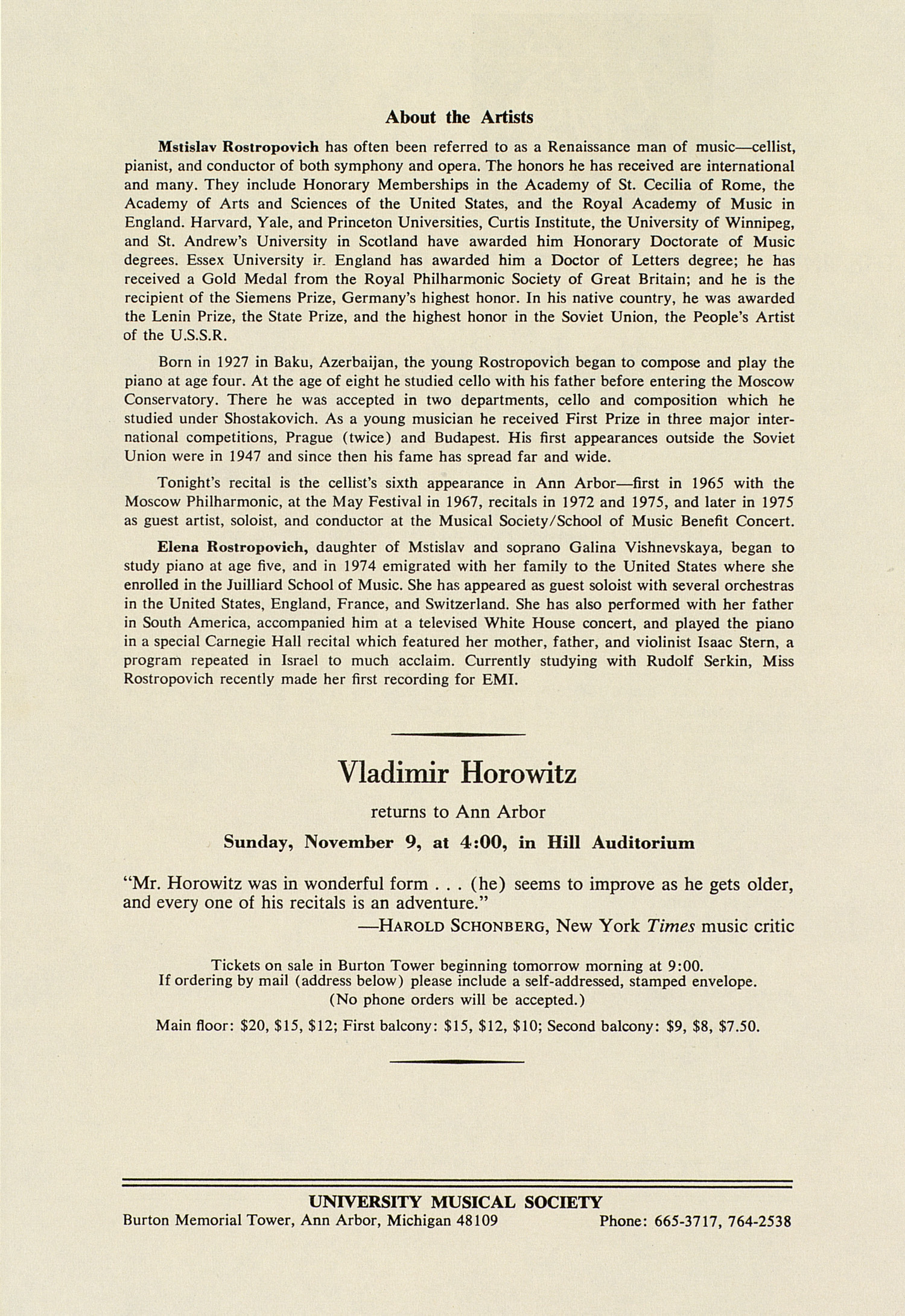 THE UNIVERSITY MUSICAL SOCIETY OF THE UNIVERSITY OF MICHIGAN
Mstislav Rostropovich
Cellist ELENA ROSTROPOVICH, Pianist
Sunday Evening, October 12, 1980, at 8:30 Hill Auditorium, Ann Arbor, Michigan
PROGRAM
Suite No. 3 in C major for solo cello.........Bach
Praeludium Bouree I
Allemande Bouree II
Courante Gigue Sarabande
Arpeggione.............Schubert
INTERMISSION
Sonata in D minor............Debussy
Prologue Serenade Finale
Sonata in D minor, Op. 40.........Shostakovich
Moderato
Moderato con moto Largo Allegretto
Angel, Melodiya, EMI, London, DGG, and Monitor Records.
102nd Season -Ninth Concert 102nd Annual Choral Union Series
About the Artists
Mstislav Rostropovich has often been referred to as a Renaissance man of music--cellist, pianist, and conductor of both symphony and opera. The honors he has received are international and many. They include Honorary Memberships in the Academy of St. Cecilia of Rome, the Academy of Arts and Sciences of the United States, and the Royal Academy of Music in England. Harvard, Yale, and Princeton Universities, Curtis Institute, the University of Winnipeg, and St. Andrew's University in Scotland have awarded him Honorary Doctorate of Music degrees. Essex University ir. England has awarded him a Doctor of Letters degree; he has received a Gold Medal from the Royal Philharmonic Society of Great Britain; and he is the recipient of the Siemens Prize, Germany's highest honor. In his native country, he was awarded the Lenin Prize, the State Prize, and the highest honor in the Soviet Union, the People's Artist of the U.S.S.R.
Born in 1927 in Baku, Azerbaijan, the young Rostropovich began to compose and play the piano at age four. At the age of eight he studied cello with his father before entering the Moscow Conservatory. There he was accepted in two departments, cello and composition which he studied under Shostakovich. As a young musician he received First Prize in three major inter?national competitions, Prague (twice) and Budapest. His first appearances outside the Soviet Union were in 1947 and since then his fame has spread far and wide.
Tonight's recital is the cellist's sixth appearance in Ann Arbor--first in 1965 with the Moscow Philharmonic, at the May Festival in 1967, recitals in 1972 and 1975, and later in 1975 as guest artist, soloist, and conductor at the Musical SocietySchool of Music Benefit Concert.
Elena Rostropovich, daughter of Mstislav and soprano Galina Vishnevskaya, began to study piano at age five, and in 1974 emigrated with her family to the United States where she enrolled in the Juilliard School of Music. She has appeared as guest soloist with several orchestras in the United States, England, France, and Switzerland. She has also performed with her father in South America, accompanied him at a televised White House concert, and played the piano in a special Carnegie Hall recital which featured her mother, father, and violinist Isaac Stern, a program repeated in Israel to much acclaim. Currently studying with Rudolf Serkin, Miss Rostropovich recently made her first recording for EMI.
Vladimir Horowitz
returns to Ann Arbor Sunday, November 9, at 4:00, in Hill Auditorium
"Mr. Horowitz was in wonderful form . . . (he) seems to improve as he gets older, and every one of his recitals is an adventure."
--Harold Schonberg, New York Times music critic
Tickets on sale in Burton Tower beginning tomorrow morning at 9:00.
If ordering by mail (address below) please include a self-addressed, stamped envelope.
(No phone orders will be accepted.)
Main floor: $20, $15, $12; First balcony: $15, $12, $10; Second balcony: $9, $8, $7.50.
UNIVERSITY MUSICAL SOCIETY
Burton Memorial Tower, Ann Arbor, Michigan 48109 Phone: 665-3717, 764-2538