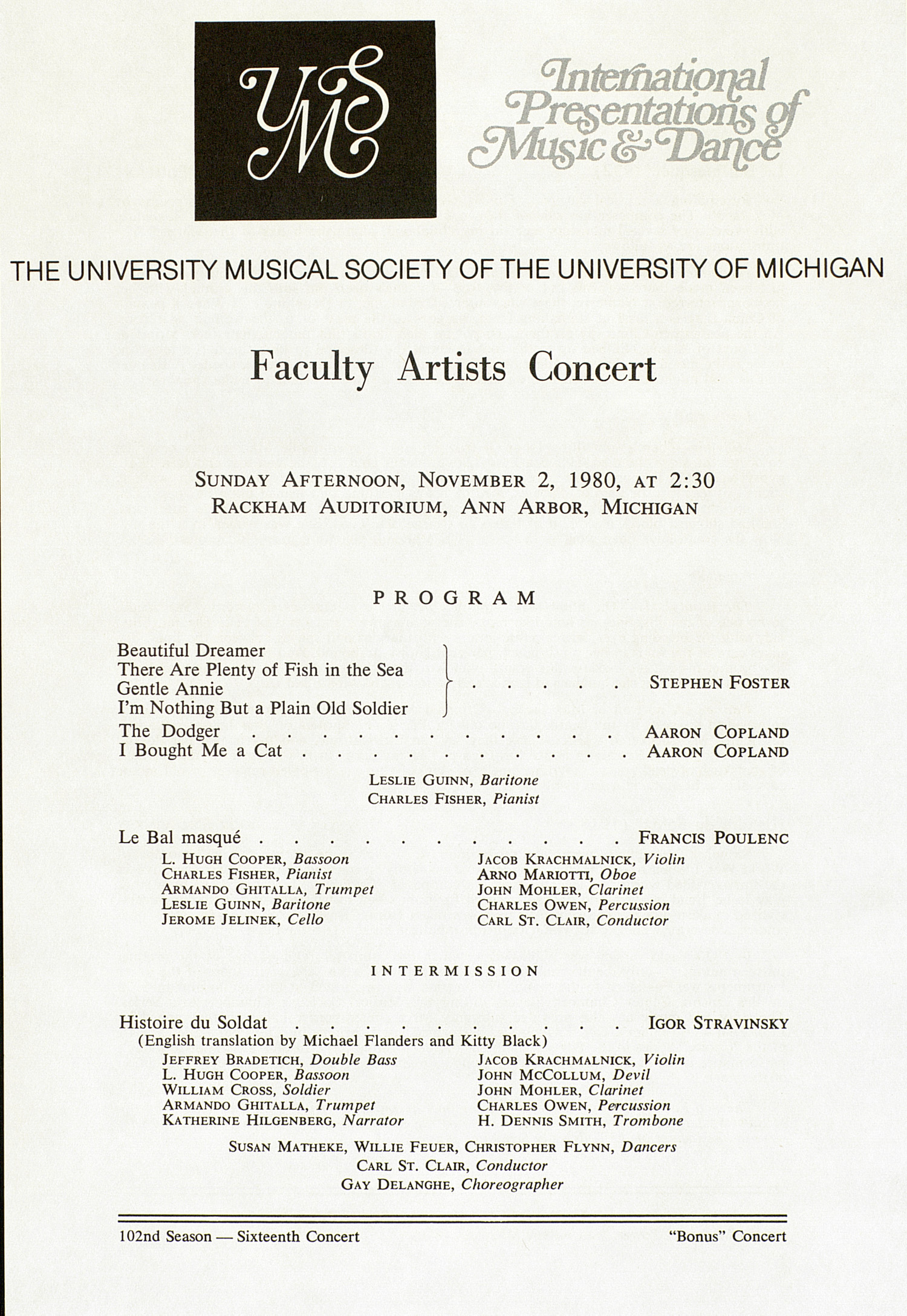 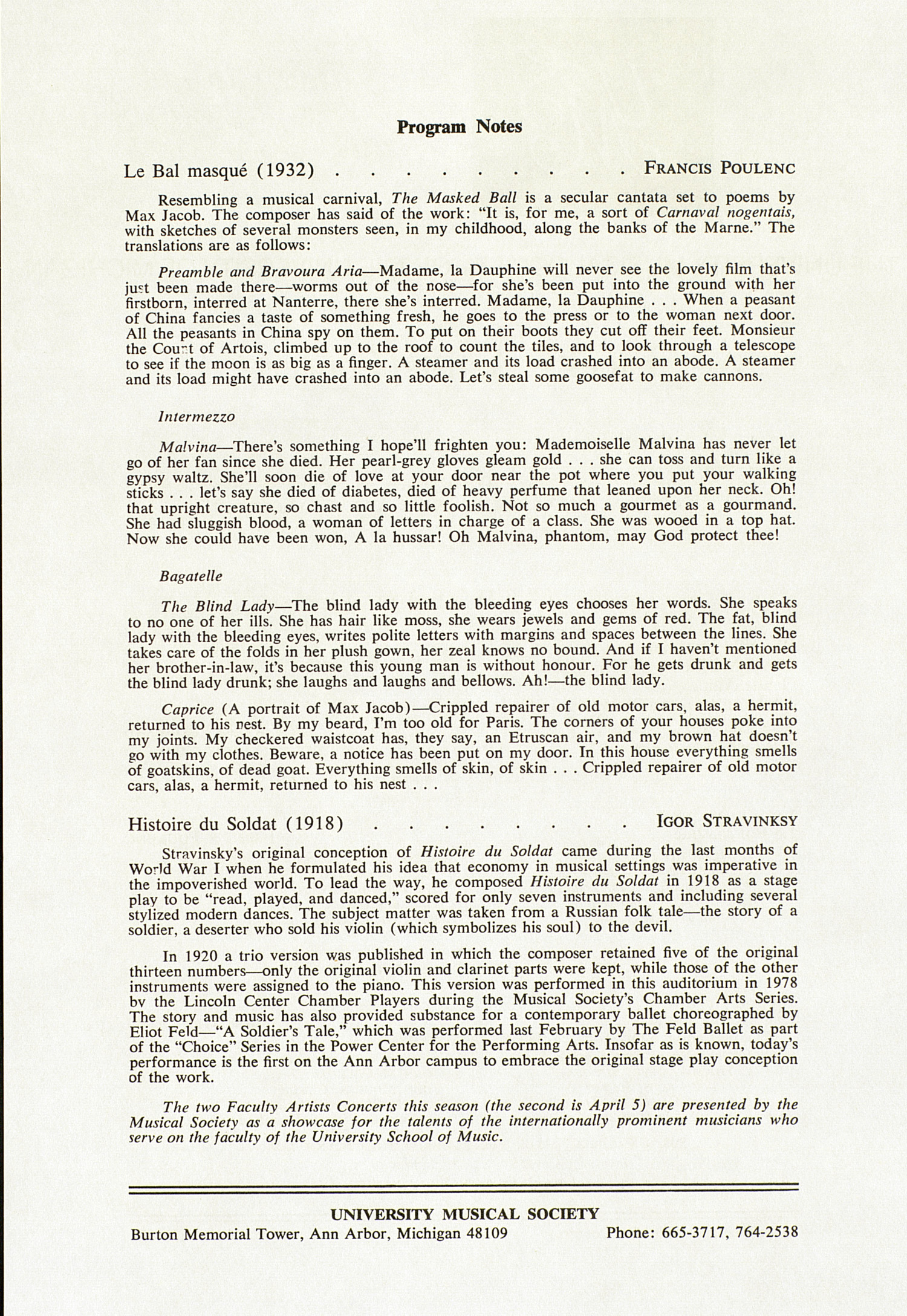 THE UNIVERSITY MUSICAL SOCIETY OF THE UNIVERSITY OF MICHIGAN
Faculty Artists Concert
Sunday Afternoon, November 2, 1980, at 2:30 Rackham Auditorium, Ann Arbor, Michigan
PROGRAM
Beautiful Dreamer
There Are Plenty of Fish in the Sea
Gentle Annie
I'm Nothing But a Plain Old Soldier
The Dodger.....
I Bought Me a Cat .
Leslie Guinn, Baritone Charles Fisher, Pianist
Le Bal masque ....
L. Hugh Cooper, Bassoon Charles Fisher, Pianist Armando Ghitalla, Trumpet Leslie Guinn, Baritone Jerome Jelinek, Cello
Stephen Foster
Aaron Copland Aaron Copland
Francis Poulenc
Jacob Krachmalnick, Violin Arno Mariotti, Oboe John Mohler, Clarinet Charles Owen, Percussion Carl St. Clair, Conductor
INTERMISSION
Histoire du Soldat.........
(English translation by Michael Flanders and Kitty Black)
Jeffrey Bradetich, Double Bass Jacob Krachmalnick, Violin
L. Hugh Cooper, Bassoon John McCollum, Devil
William Cross, Soldier John Mohler, Clarinet
Armando Ghitalla, Trumpet Charles Owen, Percussion
Katherine Hilgenberg, Narrator H. Dennis Smith, Trombone
Susan Matheke, Willie Feuer, Christopher Flynn, Dancers
Carl St. Clair, Conductor Gay Delanghe, Choreographer
Igor Stravinsky
102nd Season -Sixteenth Concert
"Bonus" Concert
Program Notes
Le Bal masque (1932).........Francis Poulenc
Resembling a musical carnival, The Masked Ball is a secular cantata set to poems by Max Jacob. The composer has said of the work: "It is, for me, a sort of Carnaval nogentais, with sketches of several monsters seen, in my childhood, along the banks of the Marne." The translations are as follows:
Preamble and Bravoura Aria--Madame, la Dauphine will never see the lovely film that's juct been made there--worms out of the nose--for she's been put into the ground with her firstborn, interred at Nanterre, there she's interred. Madame, la Dauphine . . . When a peasant of China fancies a taste of something fresh, he goes to the press or to the woman next door. All the peasants in China spy on them. To put on their boots they cut off their feet. Monsieur the Cou-t of Artois, climbed up to the roof to count the tiles, and to look through a telescope to see if the moon is as big as a finger. A steamer and its load crashed into an abode. A steamer and its load might have crashed into an abode. Let's steal some goosefat to make cannons.
Intermezzo
MaWina--There's something I hope'll frighten you: Mademoiselle Malvina has never let go of her fan since she died. Her pearl-grey gloves gleam gold ... she can toss and turn like a gypsy waltz. She'll soon die of love at your door near the pot where you put your walking sticks . . . let's say she died of diabetes, died of heavy perfume that leaned upon her neck. Oh! that upright creature, so chast and so little foolish. Not so much a gourmet as a gourmand. She had sluggish blood, a woman of letters in charge of a class. She was wooed in a top hat. Now she could have been won, A la hussar! Oh Malvina, phantom, may God protect thee!
Bagatelle
The Blind Lady--The blind lady with the bleeding eyes chooses her words. She speaks to no one of her ills. She has hair like moss, she wears jewels and gems of red. The fat, blind lady with the bleeding eyes, writes polite letters with margins and spaces between the lines. She takes care of the folds in her plush gown, her zeal knows no bound. And if I haven't mentioned her brother-in-law, it's because this young man is without honour. For he gets drunk and gets the blind lady drunk; she laughs and laughs and bellows. Ah!--the blind lady.
Caprice (A portrait of Max Jacob)--Crippled repairer of old motor cars, alas, a hermit, returned to his nest. By my beard, I'm too old for Paris. The corners of your houses poke into my joints. My checkered waistcoat has, they say, an Etruscan air, and my brown hat doesn't go with my clothes. Beware, a notice has been put on my door. In this house everything smells of goatskins, of dead goat. Everything smells of skin, of skin . . . Crippled repairer of old motor cars, alas, a hermit, returned to his nest . . .
Histoire du Soldat (1918)........Igor Stravinksy
Stravinsky's original conception of Histoire du Soldat came during the last months of World War I when he formulated his idea that economy in musical settings was imperative in the impoverished world. To lead the way, he composed Histoire du Soldat in 1918 as a stage play to be "read, played, and danced," scored for only seven instruments and including several stylized modern dances. The subject matter was taken from a Russian folk tale--the story of a soldier, a deserter who sold his violin (which symbolizes his soul) to the devil.
In 1920 a trio version was published in which the composer retained five of the original thirteen numbers--only the original violin and clarinet parts were kept, while those of the other instruments were assigned to the piano. This version was performed in this auditorium in 1978 bv the Lincoln Center Chamber Players during the Musical Society's Chamber Arts Series. The story and music has also provided substance for a contemporary ballet choreographed by Eliot Feld--"A Soldier's Tale," which was performed last February by The Feld Ballet as part of the "Choice" Series in the Power Center for the Performing Arts. Insofar as is known, today's performance is the first on the Ann Arbor campus to embrace the original stage play conception of the work.
The two Faculty Artists Concerts this season (the second is April 5) are presented by the Musical Society as a showcase for the talents of the internationally prominent musicians who serve on the faculty of the University School of Music.
UNIVERSITY MUSICAL SOCIETY
Burton Memorial Tower, Ann Arbor, Michigan 48109 Phone: 665-3717, 764-2538