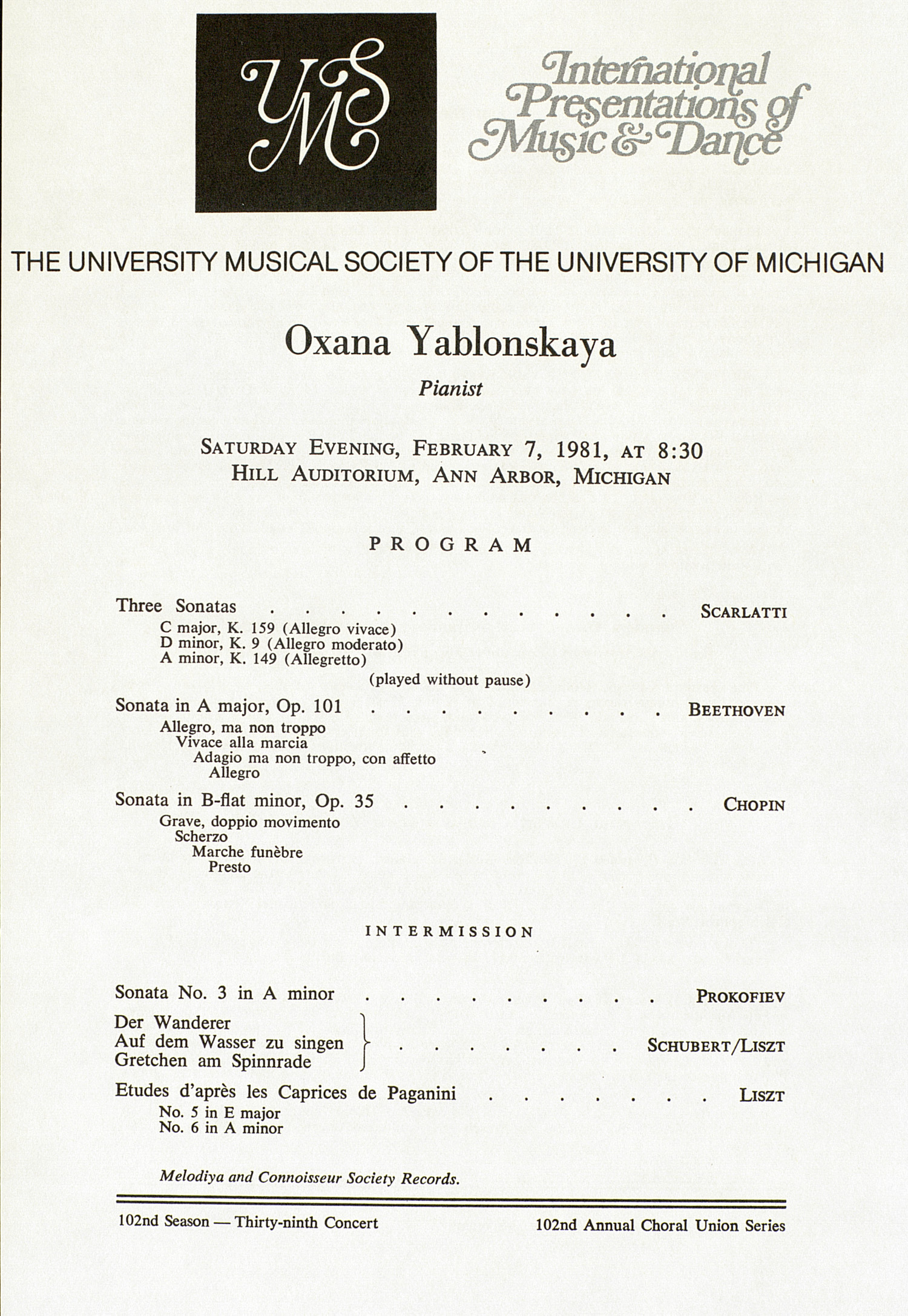 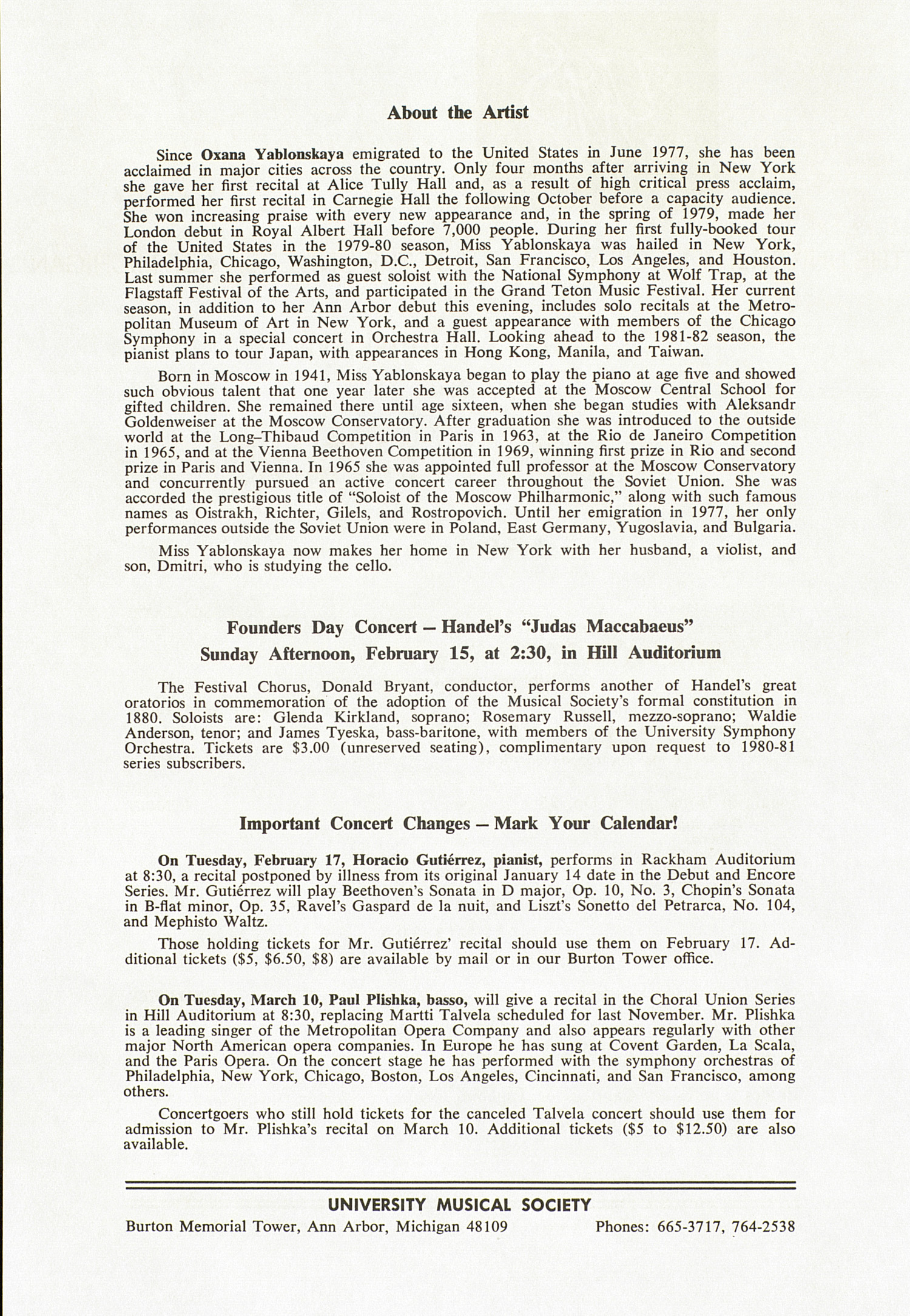 THE UNIVERSITY MUSICAL SOCIETY OF THE UNIVERSITY OF MICHIGAN
Oxana Yablonskaya
Pianist
Saturday Evening, February 7, 1981, at 8:30 Hill Auditorium, Ann Arbor, Michigan
PROGRAM
Three Sonatas........
C major, K. 159 (Allegro vivace) D minor, K. 9 (Allegro moderato) A minor, K. 149 (Allegretto)
(played without pause)
Sonata in A major, Op. 101.....
Allegro, ma non troppo Vivace alia marcia
Adagio ma non troppo, con affetto Allegro
Sonata in B-flat minor, Op. 35 ....
Grave, doppio movimento Scherzo
Marche funebre Presto
Scarlatti
Beethoven
Chopin
INTERMISSION
Sonata No. 3 in A minor
Der Wanderer
Auf dem Wasser zu singen V
Gretchen am Spinnrade J
Etudes d'apres les Caprices de Paganini
No. 5 in E major No. 6 in A minor
Prokofiev
SchubertLiszt
Liszt
Melodiya and Connoisseur Society Records.
102nd Season -Thirty-ninth Concert
102nd Annual Choral Union Series
About the Artist
Since Oxana Yablonskaya emigrated to the United States in June 1977, she has been acclaimed in major cities across the country. Only four months after arriving in New York she gave her first recital at Alice Tully Hall and, as a result of high critical press acclaim, performed her first recital in Carnegie Hall the following October before a capacity audience. She won increasing praise with every new appearance and, in the spring of 1979, made her London debut in Royal Albert Hall before 7,000 people. During her first fully-booked tour of the United States in the 1979-80 season, Miss Yablonskaya was hailed in New York, Philadelphia, Chicago, Washington, D.C., Detroit, San Francisco, Los Angeles, and Houston. Last summer she performed as guest soloist with the National Symphony at Wolf Trap, at the Flagstaff Festival of the Arts, and participated in the Grand Teton Music Festival. Her current season, in addition to her Ann Arbor debut this evening, includes solo recitals at the Metro?politan Museum of Art in New York, and a guest appearance with members of the Chicago Symphony in a special concert in Orchestra Hall. Looking ahead to the 1981-82 season, the pianist plans to tour Japan, with appearances in Hong Kong, Manila, and Taiwan.
Born in Moscow in 1941, Miss Yablonskaya began to play the piano at age five and showed such obvious talent that one year later she was accepted at the Moscow Central School for gifted children. She remained there until age sixteen, when she began studies with Aleksandr Goldenweiser at the Moscow Conservatory. After graduation she was introduced to the outside world at the Long-Thibaud Competition in Paris in 1963, at the Rio de Janeiro Competition in 1965, and at the Vienna Beethoven Competition in 1969, winning first prize in Rio and second prize in Paris and Vienna. In 1965 she was appointed full professor at the Moscow Conservatory and concurrently pursued an active concert career throughout the Soviet Union. She was accorded the prestigious title of "Soloist of the Moscow Philharmonic," along with such famous names as Oistrakh, Richter, Gilels, and Rostropovich. Until her emigration in 1977, her only performances outside the Soviet Union were in Poland, East Germany, Yugoslavia, and Bulgaria.
Miss Yablonskaya now makes her home in New York with her husband, a violist, and son. Dmitri, who is studying the cello.
Founders Day Concert -Handel's "Judas Maccabaeus" Sunday Afternoon, February 15, at 2:30, in Hill Auditorium
The Festival Chorus, Donald Bryant, conductor, performs another of Handel's great oratorios in commemoration of the adoption of the Musical Society's formal constitution in 1880. Soloists are: Glenda Kirkland, soprano; Rosemary Russell, mezzo-soprano; Waldie Anderson, tenor; and James Tyeska, bass-baritone, with members of the University Symphony Orchestra. Tickets are $3.00 (unreserved seating), complimentary upon request to 1980-81 series subscribers.
Important Concert Changes -Mark Your Calendar!
On Tuesday, February 17, Horacio Gutierrez, pianist, performs in Rackham Auditorium at 8:30, a recital postponed by illness from its original January 14 date in the Debut and Encore Series. Mr. Gutierrez will play Beethoven's Sonata in D major, Op. 10, No. 3, Chopin's Sonata in B-flat minor, Op. 35, Ravel's Gaspard de la nuit, and Liszt's Sonetto del Petrarca, No. 104, and Mephisto Waltz.
Those holding tickets for Mr. Gutierrez' recital should use them on February 17. Ad?ditional tickets ($5, $6.50. $8) are available by mail or in our Burton Tower office.
On Tuesday, March 10, Paul Plishka, basso, will give a recital in the Choral Union Series in Hill Auditorium at 8:30, replacing Martti Talvela scheduled for last November. Mr. Plishka is a leading singer of the Metropolitan Opera Company and also appears regularly with other major North American opera companies. In Europe he has sung at Covent Garden, La Scala, and the Paris Opera. On the concert stage he has performed with the symphony orchestras of Philadelphia, New York, Chicago, Boston, Los Angeles, Cincinnati, and San Francisco, among others.
Concertgoers who still hold tickets for the canceled Talvela concert should use them for admission to Mr. Plishka's recital on March 10. Additional tickets ($5 to $12.50) are also available.
UNIVERSITY MUSICAL SOCIETY
Burton Memorial Tower, Ann Arbor, Michigan 48109 Phones: 665-3717, 764-2538