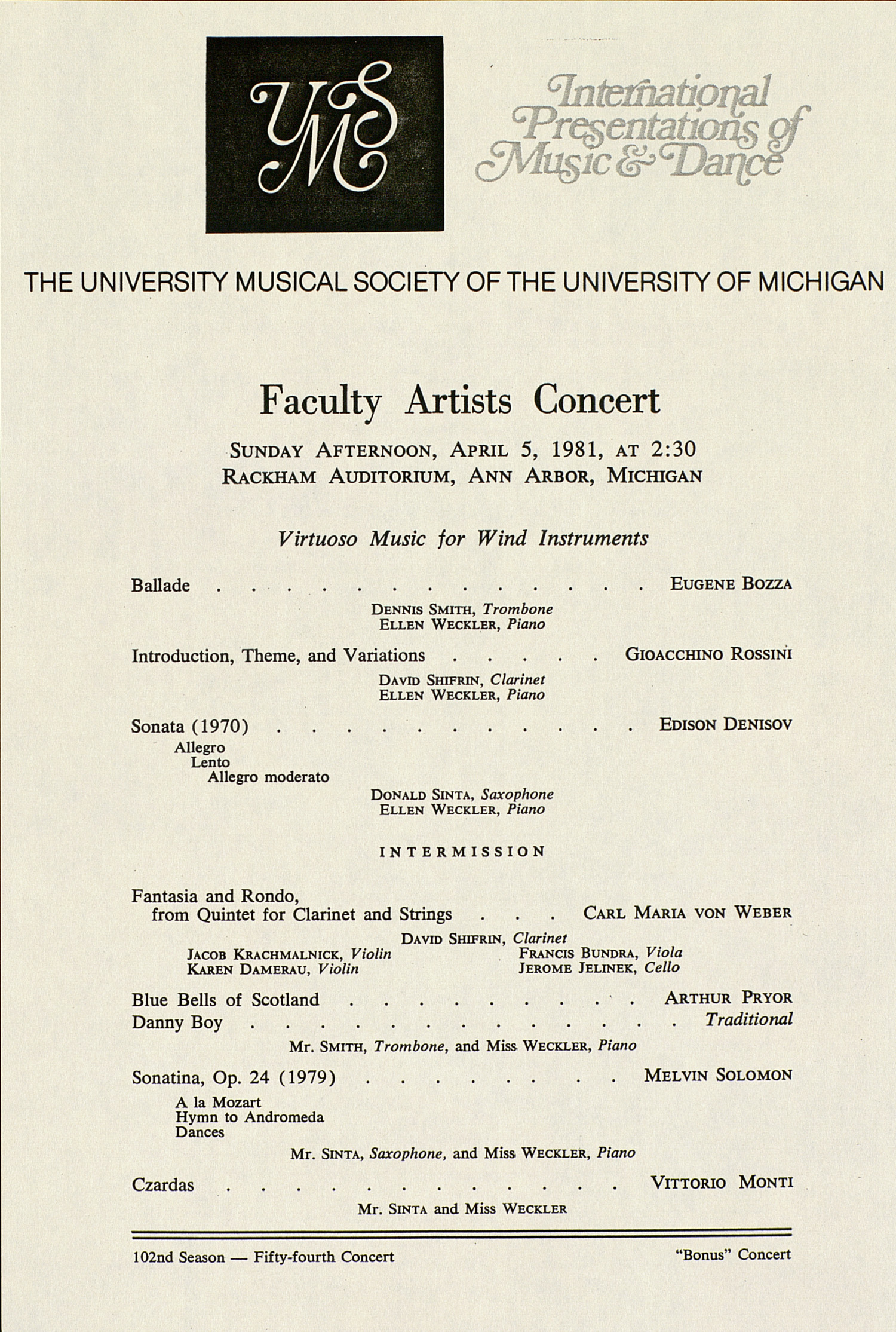 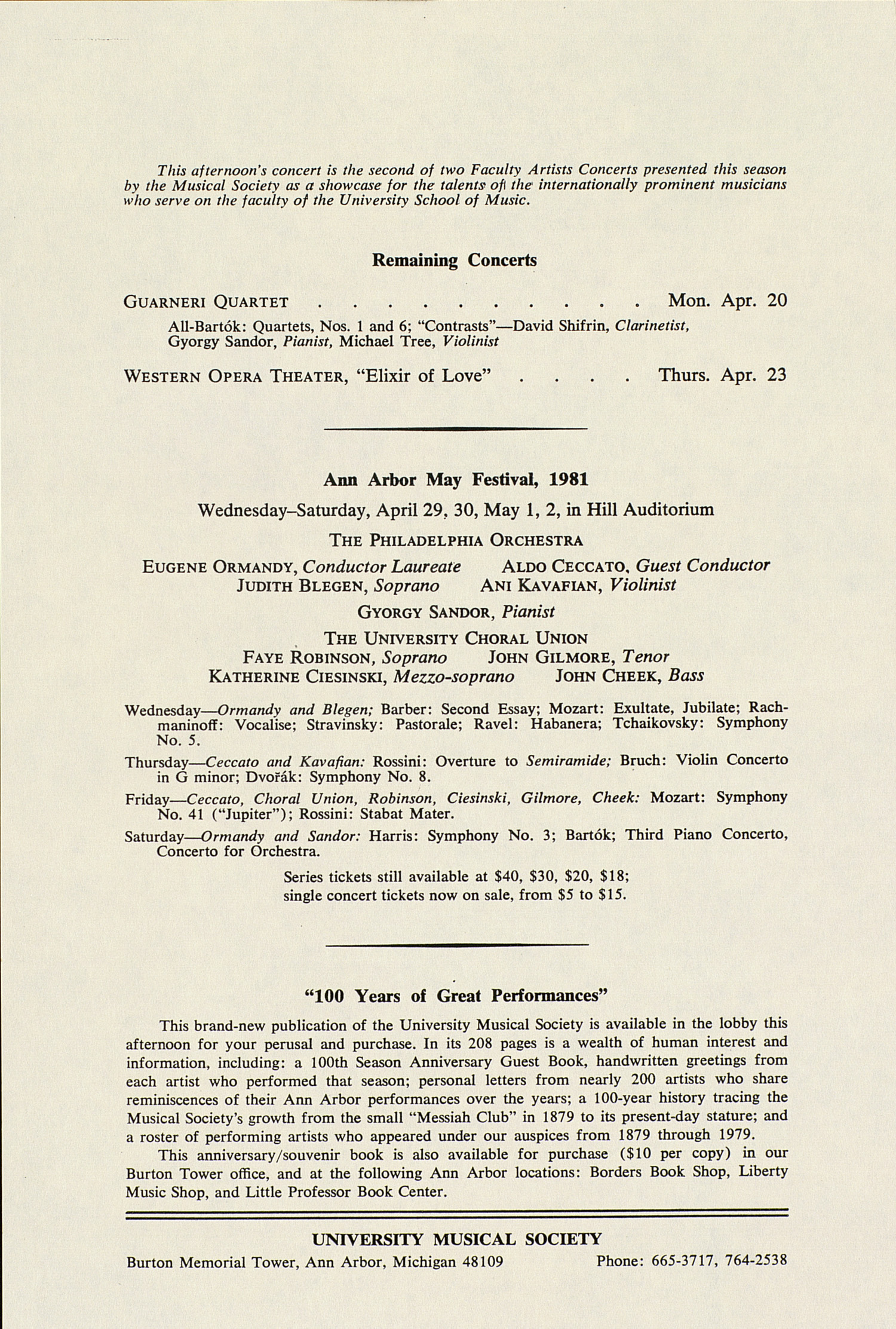 THE UNIVERSITY MUSICAL SOCIETY OF THE UNIVERSITY OF MICHIGAN
Guarneri String Quartet
ARNOLD STEINHARDT, Violinist MICHAEL TREE, Violist JOHN DALLEY, Violinist DAVID SOYER, Cellist
Assisting Artists Gyorgy Sandor, Pianist David Shifrin, Clarinetist
Monday Evening, April 20, 1981, at 8:30 Rackham Auditorium, Ann Arbor, Michigan
Compositions of Be la Bart ok
Quartet No. 1
Lento Allegretto
Introduzione, allegro vivace
"Contrasts" for Violin, Clarinet, and Piano
Verbunkos (Recruiting Dance) Piheno (Repose) Sebes (Fast)
Michael Tree, David Shifrin, and Gyorgy Sandor
INTERMISSION
Quartet No. 6
Mesto, vivace Mesto, marcia Mesto, burletta
Mesto. molto tranquillo
RCA Red Seal Records
102nd Season -Fifty-fifth Concert Eighteenth Annual Chamber Arts Series
PROGRAM NOTES by Jeremy Yudkin
String Quartet No. 1..........Bela Bartok
The First String Quartet was written in 1908 when Bartok was twenty-seven. It is a fasci?nating piece that reflects the images of earlier styles and techniques absorbed by the young com?poser, while still containing music of abundant originality and finesse. The three movements form one continuous whole, and are played without pause. The opening slow fugue is a clear nod in the direction of Beethoven, particularly his Op. 131, and floats free and untrammeled. In a central passage strong cello chords lay the foundation for a rhapsodic viola oration, joined soon by the second violin. All four instruments combine before a return of the opening. The whole movement is a study in contrasts--of texture, dynamics, and joint or solo playing.
The second movement starts quietly and grows directly from the ending of the first. The parallel thirds lend a slightly old-fashioned air to the music. A little repeated rhythmic figure in the first violin contains elements which prove to be important both in this movement and in the final Allegro. Later a repeated note on the cello changes the musical landscape. Tran?quillity slowly gives way to agitation and sustained rhetoric, but the movement subsides quietly and peacefully.
An introduction to the last movement is characterized by improvisatory solos punctuated by chordal outbursts. The movement proper is carried forward by frenzied and clashing repeated notes. A hint may here be heard of the Hungarian folk music that Bartok and Kodaly were together investigating and publishing. A central section is slow and expressive over tremolo chords. The quixotic energy of the gypsy music returns, however, and a dance melody that has grown from earlier material. The tempo slows again several times, which only intensifies the final whirling, impassioned ending.
"Contrasts" for Violin, Clarinet, and Piano......Bartok
"Contrasts" is the only chamber work that Bartok wrote that uses a wind instrument. As a composer, Bartok was vitally concerned with sound and the sound quality of the instruments for which he wrote. The six string quartets are marvels of variety and color within the medium of a completely homogeneous group. When writing for piano, Bartok frequently exploited the inherent percussive qualities of that instrument. In the case of "Contrasts," which was com?missioned from the composer by Benny Goodman in 1938, Bartok was driven to emphasize the tonal and timbral differences between the three instruments, rather than to attempt to blend them.
The piano is relegated primarily to an accompanying role, providing coloristic effects and rhythmic underpinning. The potentialities of the other two instruments, however, are exploited to the full. The clarinetist is encouraged to use two instruments (a clarinet in B-flat for part of the last movement), though a version of the piece for one instrument throughout exists; and a wide range, diverse tone colors, extremes of dynamics and articulation are thoroughly explored. The violinist begins playing the last movement with a violin scordalura, or deliberately mistuned, but soon switches to another instrument tuned in the normal way. Throughout, the violin part exhibits the virtuoso writing and expanded effects of color and sonority that Bartok had developed so highly in his string quartets.
The opening movement is slow and rhythmic, but scattered with rippling cascades of sound and a soaring clarinet cadenza.
Pihenii is relaxed and peaceful with occasional stormy and dissonant passages that cloud the atmosphere.
The final movement projects a quick and humorous dance, with a quiet central section in mixed Bulgarian rhythm that dissolves into polytonality. A fiery violin cadenza precedes the lively and exuberant ending.
String Quartet No. 6...........Bartok
With the Sixth Quartet (1941), Bartok abandoned the arch form that had provided such a powerful architectural design in his previous two quartets, and developed a completely new