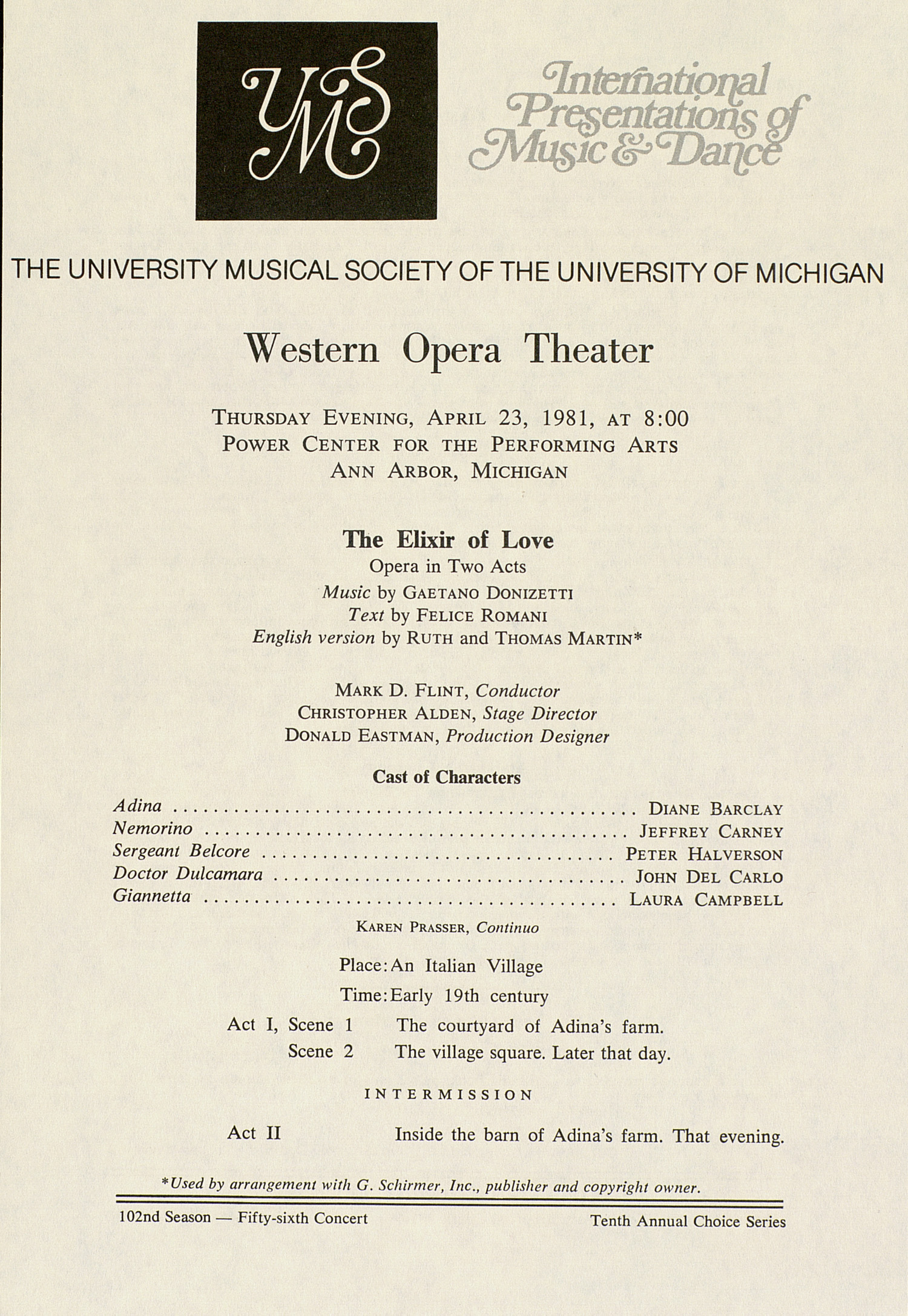 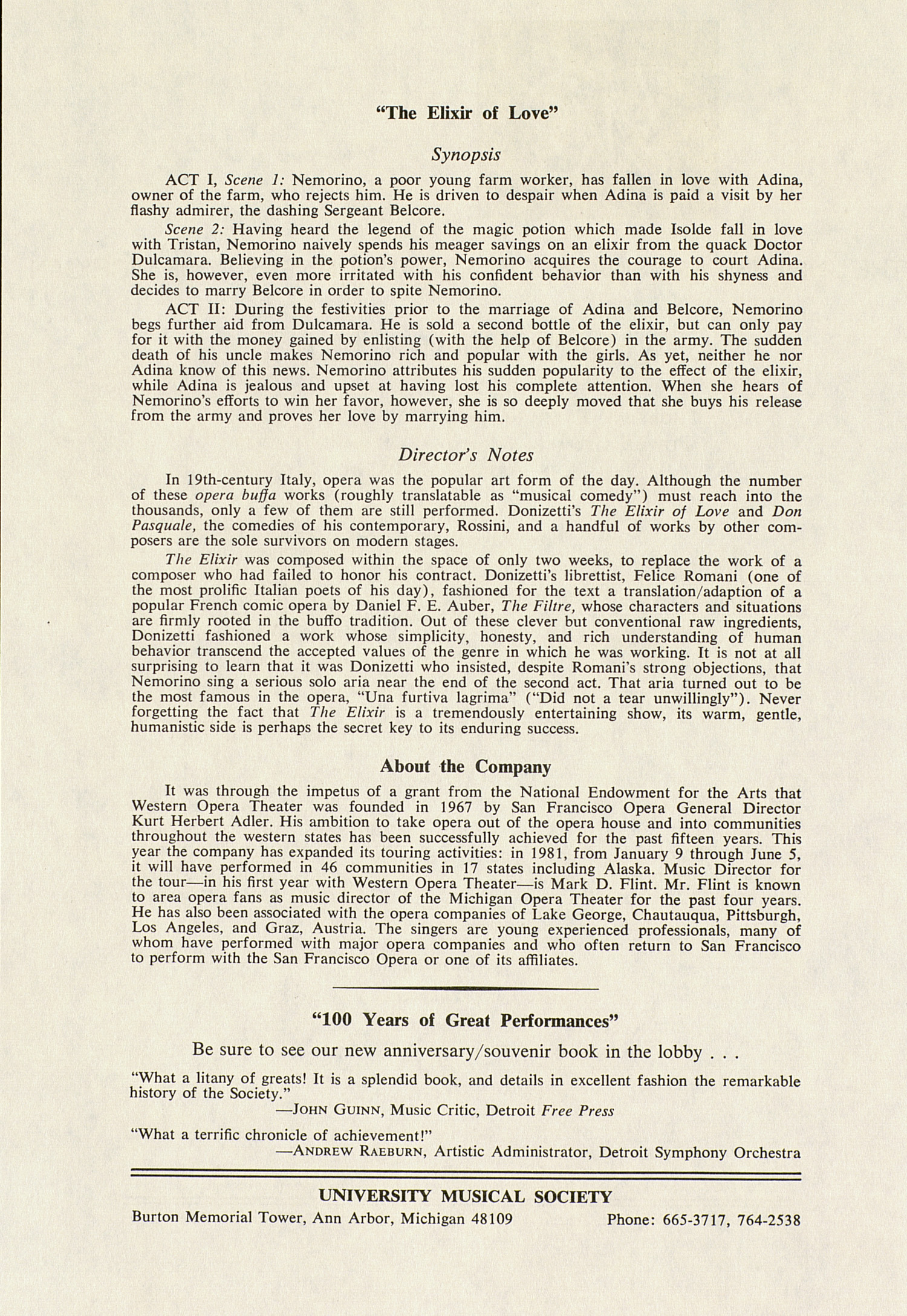 THE UNIVERSITY MUSICAL SOCIETY OF THE UNIVERSITY OF MICHIGAN
Western Opera Theater
Thursday Evening, April 23, 1981, at 8:00
Power Center for the Performing Arts
Ann Arbor, Michigan
The Elixir of Love
Opera in Two Acts Music by Gaetano Donizetti
Text by Felice Romani English version by Ruth and Thomas Martin
Mark D. Flint, Conductor
Christopher Alden, Stage Director
Donald Eastman, Production Designer
Cast of Characters
Adina .............................................. Diane Barclay
Nemorino .......................................... Jeffrey Carney
Sergeant Belcore ................................... Peter Halverson
Doctor Dulcamara...................................John Del Carlo
Giannetta ......................................... Laura Campbell
Karen Prasser, Continuo
Place:An Italian Village Time: Early 19th century
Act I, Scene 1 The courtyard of Adina's farm. Scene 2 The village square. Later that day.
INTERMISSION
Act II Inside the barn of Adina's farm. That evening.
Used by arrangement with G. Schirmer, Inc., publisher and copyright owner. 102nd Season -Fifty-sixth Concert Tenth Annual Choice Series
"The Elixir of Love"
Synopsis
ACT I, Scene 1: Nemorino, a poor young farm worker, has fallen in love with Adina, owner of the farm, who rejects him. He is driven to despair when Adina is paid a visit by her flashy admirer, the dashing Sergeant Belcore.
Scene 2: Having heard the legend of the magic potion which made Isolde fall in love with Tristan, Nemorino naively spends his meager savings on an elixir from the quack Doctor Dulcamara. Believing in the potion's power, Nemorino acquires the courage to court Adina. She is, however, even more irritated with his confident behavior than with his shyness and decides to marry Belcore in order to spite Nemorino.
ACT II: During the festivities prior to the marriage of Adina and Belcore, Nemorino begs further aid from Dulcamara. He is sold a second bottle of the elixir, but can only pay for it with the money gained by enlisting (with the help of Belcore) in the army. The sudden death of his uncle makes Nemorino rich and popular with the girls. As yet, neither he nor Adina know of this news. Nemorino attributes his sudden popularity to the effect of the elixir, while Adina is jealous and upset at having lost his complete attention. When she hears of Nemorino's efforts to win her favor, however, she is so deeply moved that she buys his release from the army and proves her love by marrying him.
Director's Notes
In 19th-century Italy, opera was the popular art form of the day. Although the number of these opera bufja works (roughly translatable as "musical comedy") must reach into the thousands, only a few of them are still performed. Donizetti's The Elixir of Love and Don Pasquale, the comedies of his contemporary, Rossini, and a handful of works by other com?posers are the sole survivors on modern stages.
The Elixir was composed within the space of only two weeks, to replace the work of a composer who had failed to honor his contract. Donizetti's librettist, Felice Romani (one of the most prolific Italian poets of his day), fashioned for the text a translationadaption of a popular French comic opera by Daniel F. E. Auber, The Fillre, whose characters and situations are firmly rooted in the buffo tradition. Out of these clever but conventional raw ingredients, Donizetti fashioned a work whose simplicity, honesty, and rich understanding of human behavior transcend the accepted values of the genre in which he was working. It is not at all surprising to learn that it was Donizetti who insisted, despite Romani's strong objections, that Nemorino sing a serious solo aria near the end of the second act. That aria turned out to be the most famous in the opera, "Una furtiva lagrima" ("Did not a tear unwillingly"). Never forgetting the fact that The Elixir is a tremendously entertaining show, its warm, gentle, humanistic side is perhaps the secret key to its enduring success.
About the Company
It was through the impetus of a grant from the National Endowment for the Arts that Western Opera Theater was founded in 1967 by San Francisco Opera General Director Kurt Herbert Adler. His ambition to take opera out of the opera house and into communities throughout the western states has been successfully achieved for the past fifteen years. This year the company has expanded its touring activities: in 1981, from January 9 through June 5, it will have performed in 46 communities in 17 states including Alaska. Music Director for the tour--in his first year with Western Opera Theater--is Mark D. Flint. Mr. Flint is known to area opera fans as music director of the Michigan Opera Theater for the past four years. He has also been associated with the opera companies of Lake George, Chautauqua. Pittsburgh, Los Angeles, and Graz, Austria. The singers are young experienced professionals, many of whom have performed with major opera companies and who often return to San Francisco to perform with the San Francisco Opera or one of its affiliates.
"100 Years of Great Performances"
Be sure to see our new anniversarysouvenir book in the lobby . . .
"What a litany of greats! It is a splendid book, and details in excellent fashion the remarkable history of the Society."
--John Guinn, Music Critic, Detroit Free Press
"What a terrific chronicle of achievement!"
---Andrew Raeburn, Artistic Administrator, Detroit Symphony Orchestra
UNIVERSITY MUSICAL SOCIETY
Burton Memorial Tower, Ann Arbor, Michigan 48109 Phone: 665-3717, 764-2538