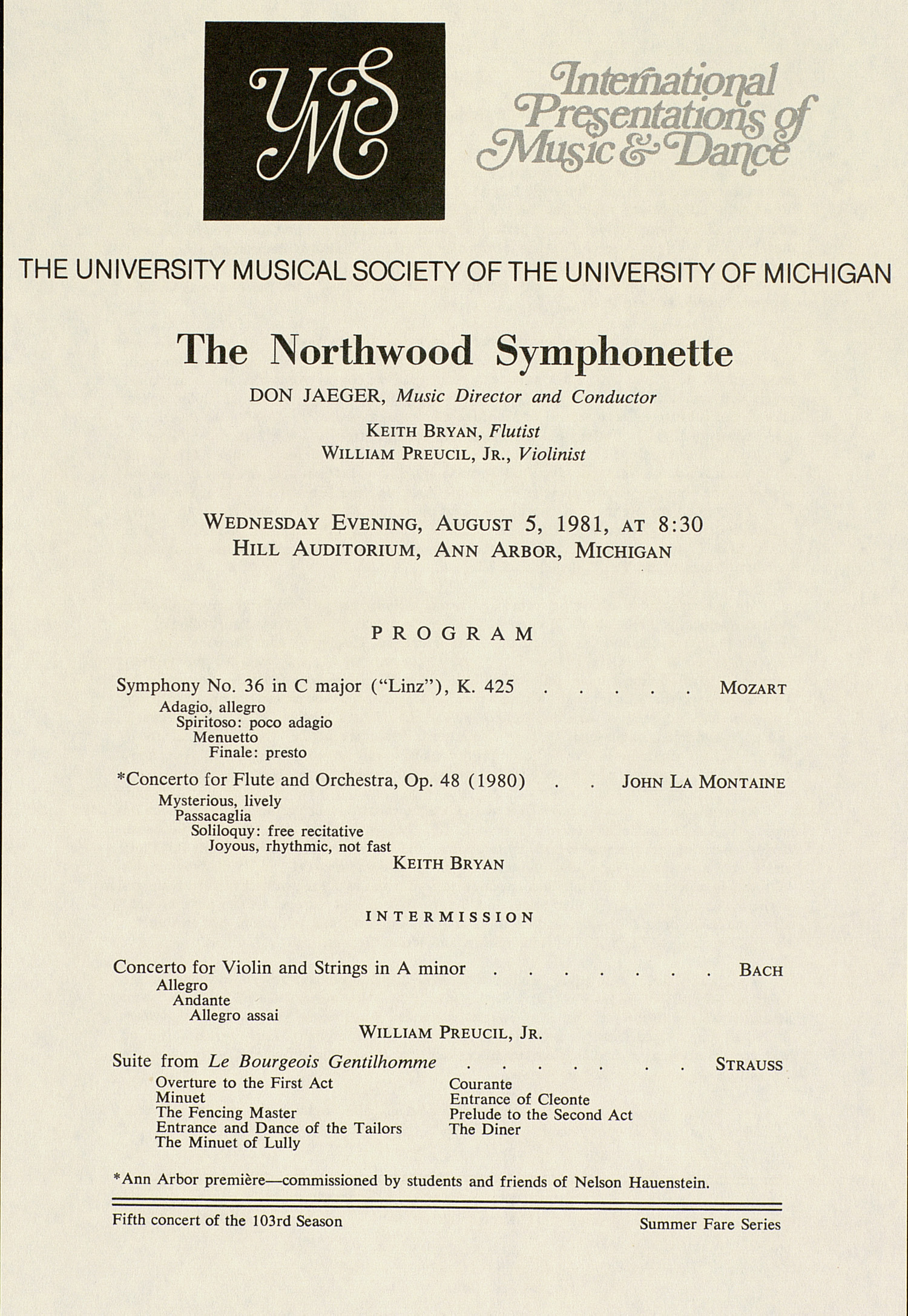 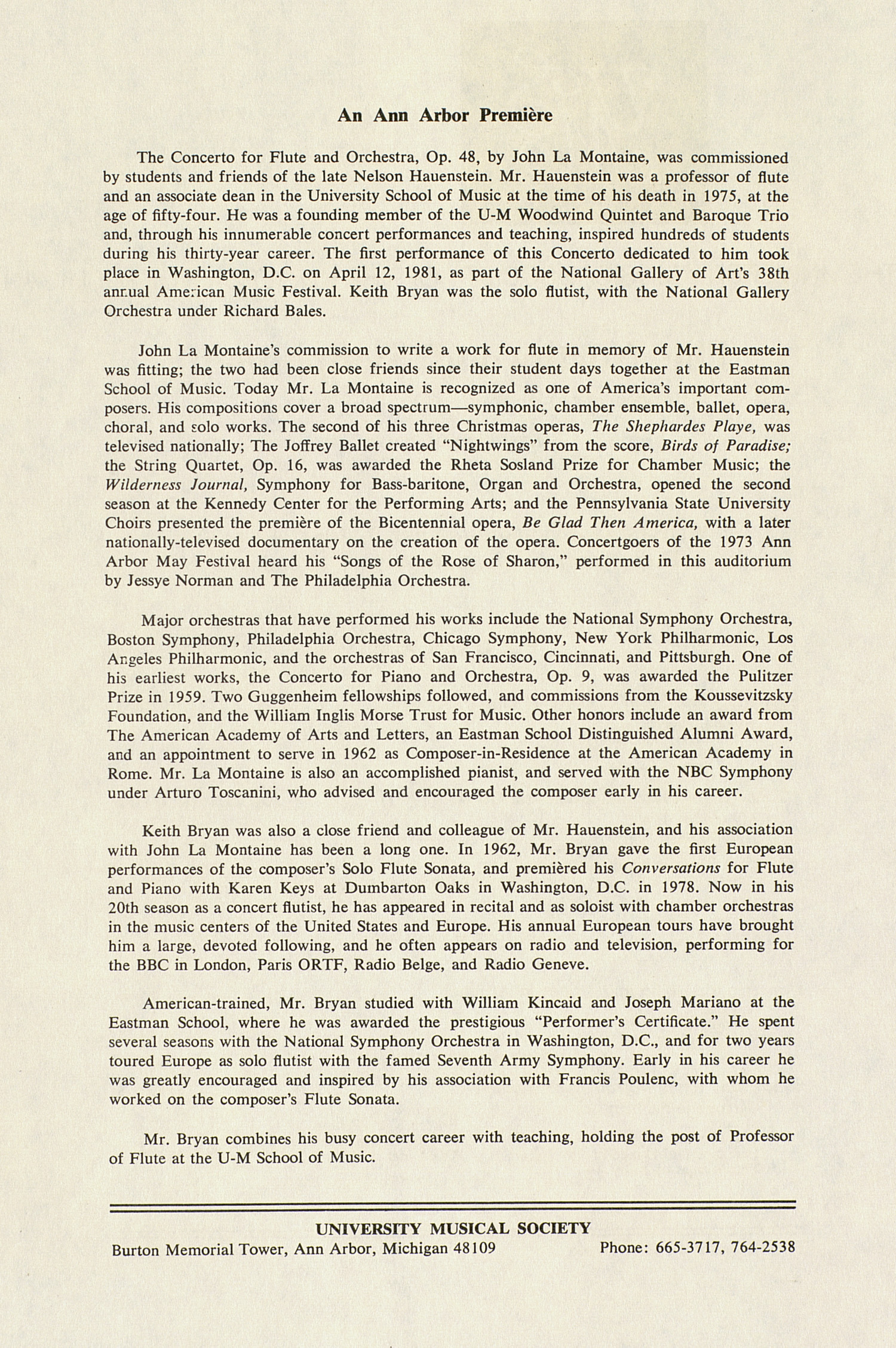 lnteifiatipnal
THE UNIVERSITY MUSICAL SOCIETY OF THE UNIVERSITY OF MICHIGAN
The Northwood Symphonette
DON JAEGER, Music Director and Conductor
Keith Bryan, Flutist William Preucil, Jr., Violinist
Wednesday Evening, August 5, 1981, at 8:30 Hill Auditorium, Ann Arbor, Michigan
PROGRAM
Symphony No. 36 in C major ("Linz"), K. 425
Adagio, allegro
Spiritoso: poco adagio Menuetto Finale: presto
?Concerto for Flute and Orchestra, Op. 48 (1980)
Mysterious, lively Passacaglia
Soliloquy: free recitative Joyous, rhythmic, not fast
Keith Bryan
Mozart
John La Montaine
INTERMISSION
Concerto for Violin and Strings in A minor.......Bach
Allegro Andante
Allegro assai
William Preucil, Jr.
Suite from Le Bourgeois Gentilhomme...... . Strauss
Overture to the First Act Courante
Minuet Entrance of Cleonte
The Fencing Master Prelude to the Second Act
Entrance and Dance of the Tailors The Diner
The Minuet of Lully
Ann Arbor premiere--commissioned by students and friends of Nelson Hauenstein.
Fifth concert of the 103rd Season
Summer Fare Series
An Ann Arbor Premiere
The Concerto for Flute and Orchestra, Op. 48, by John La Montaine, was commissioned by students and friends of the late Nelson Hauenstein. Mr. Hauenstein was a professor of flute and an associate dean in the University School of Music at the time of his death in 1975, at the age of fifty-four. He was a founding member of the U-M Woodwind Quintet and Baroque Trio and, through his innumerable concert performances and teaching, inspired hundreds of students during his thirty-year career. The first performance of this Concerto dedicated to him took place in Washington, D.C. on April 12, 1981, as part of the National Gallery of Art's 38th annual American Music Festival. Keith Bryan was the solo flutist, with the National Gallery Orchestra under Richard Bales.
John La Montaine's commission to write a work for flute in memory of Mr. Hauenstein was fitting; the two had been close friends since their student days together at the Eastman School of Music. Today Mr. La Montaine is recognized as one of America's important com?posers. His compositions cover a broad spectrum--symphonic, chamber ensemble, ballet, opera, choral, and solo works. The second of his three Christmas operas, The Shephardes Playe, was televised nationally; The Joffrey Ballet created "Nightwings" from the score, Birds of Paradise; the String Quartet, Op. 16, was awarded the Rheta Sosland Prize for Chamber Music; the Wilderness Journal, Symphony for Bass-baritone, Organ and Orchestra, opened the second season at the Kennedy Center for the Performing Arts; and the Pennsylvania State University Choirs presented the premiere of the Bicentennial opera, Be Glad Then America, with a later nationally-televised documentary on the creation of the opera. Concertgoers of the 1973 Ann Arbor May Festival heard his "Songs of the Rose of Sharon," performed in this auditorium by Jessye Norman and The Philadelphia Orchestra.
Major orchestras that have performed his works include the National Symphony Orchestra, Boston Symphony, Philadelphia Orchestra, Chicago Symphony, New York Philharmonic, Los Ar.geles Philharmonic, and the orchestras of San Francisco, Cincinnati, and Pittsburgh. One of his earliest works, the Concerto for Piano and Orchestra, Op. 9, was awarded the Pulitzer Prize in 1959. Two Guggenheim fellowships followed, and commissions from the Koussevitzsky Foundation, and the William Inglis Morse Trust for Music. Other honors include an award from The American Academy of Arts and Letters, an Eastman School Distinguished Alumni Award, and an appointment to serve in 1962 as Composer-in-Residence at the American Academy in Rome. Mr. La Montaine is also an accomplished pianist, and served with the NBC Symphony under Arturo Toscanini, who advised and encouraged the composer early in his career.
Keith Bryan was also a close friend and colleague of Mr. Hauenstein, and his association with John La Montaine has been a long one. In 1962, Mr. Bryan gave the first European performances of the composer's Solo Flute Sonata, and premiered his Conversations for Flute and Piano with Karen Keys at Dumbarton Oaks in Washington, D.C. in 1978. Now in his 20th season as a concert flutist, he has appeared in recital and as soloist with chamber orchestras in the music centers of the United States and Europe. His annual European tours have brought him a large, devoted following, and he often appears on radio and television, performing for the BBC in London, Paris ORTF, Radio Beige, and Radio Geneve.
American-trained, Mr. Bryan studied with William Kincaid and Joseph Mariano at the Eastman School, where he was awarded the prestigious "Performer's Certificate." He spent several seasons with the National Symphony Orchestra in Washington, D.C., and for two years toured Europe as solo flutist with the famed Seventh Army Symphony. Early in his career he was greatly encouraged and inspired by his association with Francis Poulenc, with whom he worked on the composer's Flute Sonata.
Mr. Bryan combines his busy concert career with teaching, holding the post of Professor of Flute at the U-M School of Music.
UNIVERSITY MUSICAL SOCIETY
Burton Memorial Tower, Ann Arbor, Michigan 48109 Phone: 665-3717, 764-2538