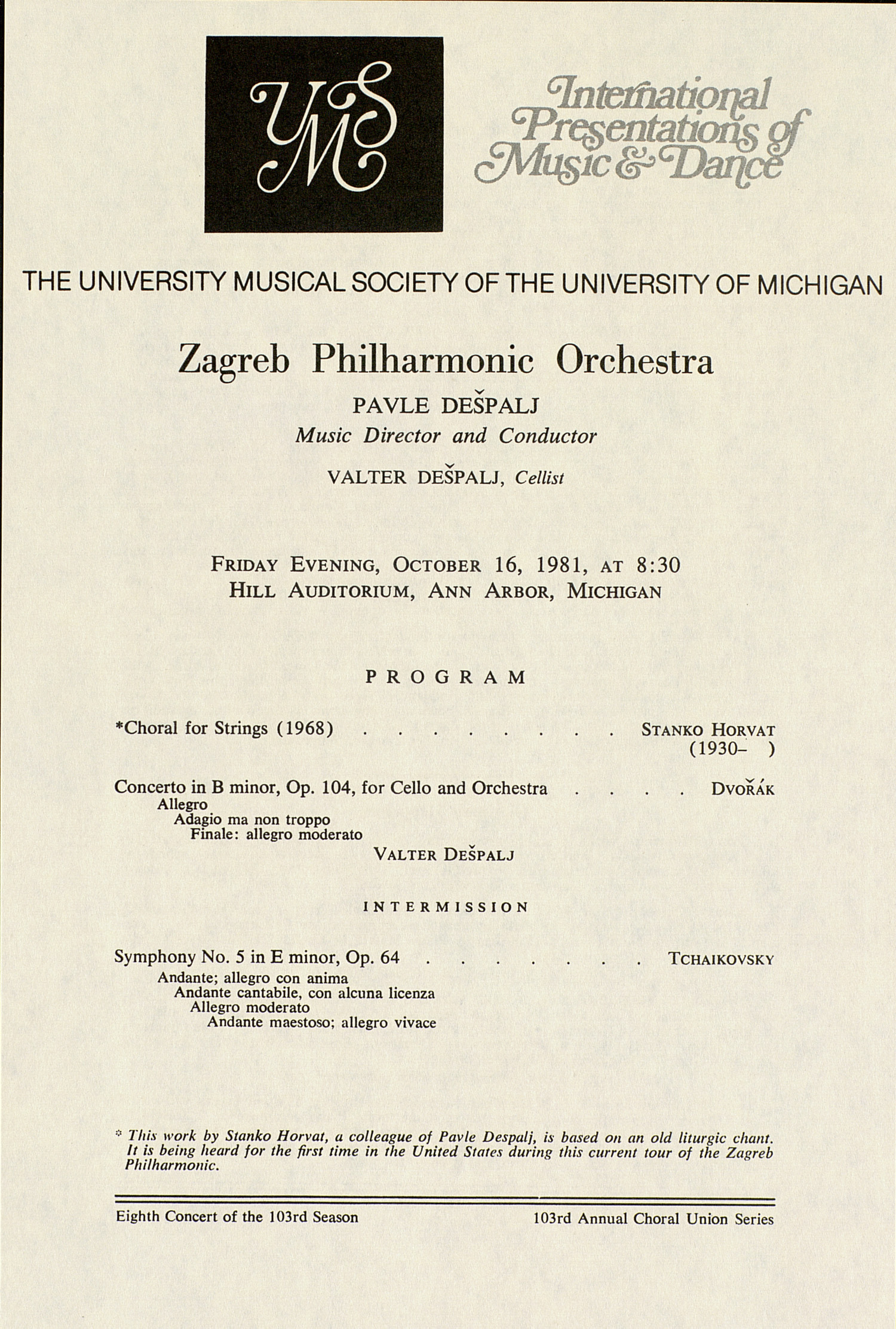 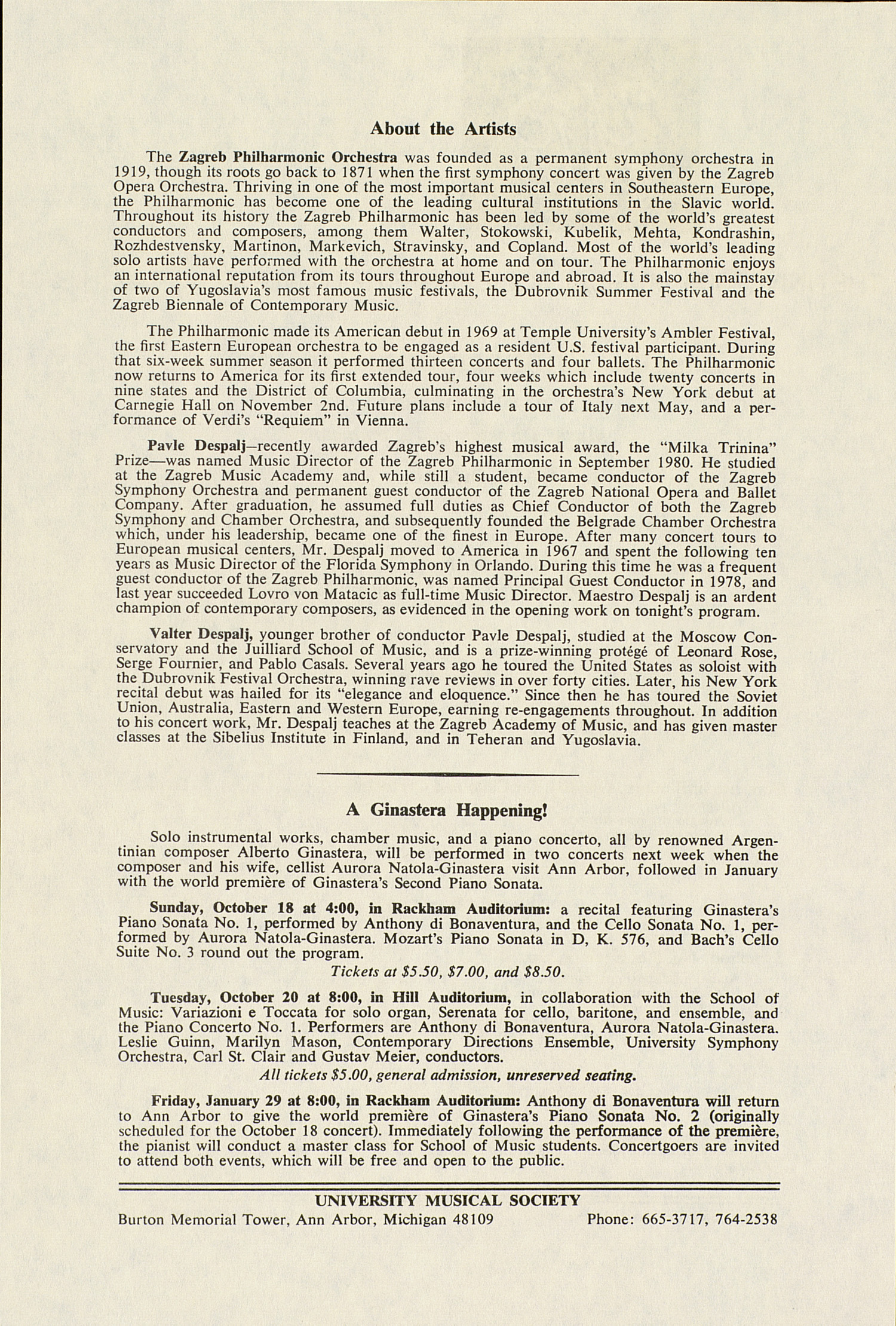 THE UNIVERSITY MUSICAL SOCIETY OF THE UNIVERSITY OF MICHIGAN
Zagreb Philharmonic Orchestra
PAVLE DESPALJ
Music Director and Conductor VALTER DESPALJ, Cellist
Friday Evening, October 16, 1981, at 8:30 Hill Auditorium, Ann Arbor, Michigan
PROGRAM
Choral for Strings (1968)
Concerto in B minor, Op. 104, for Cello and Orchestra Allegro
Adagio ma non troppo Finale: allegro moderate
VALTER DESPALJ
Stanko Horvat (1930)
Dvorak
INTERMISSION
Symphony No. 5 in E minor, Op. 64
Andante; allegro con anima
Andante cantabile, con alcuna licenza Allegro moderato
Andante maestoso; allegro vivace
Tchaikovsky
This work by Stanko Horvat, a colleague of Pavle Despalj, is based on an old lilurgic chant. It is being heard for the first time in the United States during this current tour of the Zagreb Philharmonic.
Eighth Concert of the 103rd Season
103rd Annual Choral Union Series
About the Artists
The Zagreb Philharmonic Orchestra was founded as a permanent symphony orchestra in 1919, though its roots go back to 1871 when the first symphony concert was given by the Zagreb Opera Orchestra. Thriving in one of the most important musical centers in Southeastern Europe, the Philharmonic has become one of the leading cultural institutions in the Slavic world. Throughout its history the Zagreb Philharmonic has been led by some of the world's greatest conductors and composers, among them Walter, Stokowski, Kubelik, Mehta, Kondrashin, Rozhdestvensky, Martinon, Markevich, Stravinsky, and Copland. Most of the world's leading solo artists have performed with the orchestra at home and on tour. The Philharmonic enjoys an international reputation from its tours throughout Europe and abroad. It is also the mainstay of two of Yugoslavia's most famous music festivals, the Dubrovnik Summer Festival and the Zagreb Biennale of Contemporary Music.
The Philharmonic made its American debut in 1969 at Temple University's Ambler Festival, the first Eastern European orchestra to be engaged as a resident U.S. festival participant. During that six-week summer season it performed thirteen concerts and four ballets. The Philharmonic now returns to America for its first extended tour, four weeks which include twenty concerts in nine states and the District of Columbia, culminating in the orchestra's New York debut at Carnegie Hall on November 2nd. Future plans include a tour of Italy next May, and a per?formance of Verdi's "Requiem" in Vienna.
Pavle Despalj--recently awarded Zagreb's highest musical award, the "Milka Trinina" Prize--was named Music Director of the Zagreb Philharmonic in September 1980. He studied at the Zagreb Music Academy and, while still a student, became conductor of the Zagreb Symphony Orchestra and permanent guest conductor of the Zagreb National Opera and Ballet Company. After graduation, he assumed full duties as Chief Conductor of both the Zagreb Symphony and Chamber Orchestra, and subsequently founded the Belgrade Chamber Orchestra which, under his leadership, became one of the finest in Europe. After many concert tours to European musical centers, Mr. Despalj moved to America in 1967 and spent the following ten years as Music Director of the Florida Symphony in Orlando. During this time he was a frequent guest conductor of the Zagreb Philharmonic, was named Principal Guest Conductor in 1978, and last year succeeded Lovro von Matacic as full-time Music Director. Maestro Despalj is an ardent champion of contemporary composers, as evidenced in the opening work on tonight's program.
Valter Despalj, younger brother of conductor Pavle Despalj, studied at the Moscow Con?servatory and the Juilliard School of Music, and is a prize-winning protege of Leonard Rose, Serge Fournier, and Pablo Casals. Several years ago he toured the United States as soloist with the Dubrovnik Festival Orchestra, winning rave reviews in over forty cities. Later, his New York recital debut was hailed for its "elegance and eloquence." Since then he has toured the Soviet Union, Australia, Eastern and Western Europe, earning re-engagements throughout. In addition to his concert work, Mr. Despalj teaches at the Zagreb Academy of Music, and has given master classes at the Sibelius Institute in Finland, and in Teheran and Yugoslavia.
A Ginastera Happening!
Solo instrumental works, chamber music, and a piano concerto, all by renowned Argen?tinian composer Alberto Ginastera, will be performed in two concerts next week when the composer and his wife, cellist Aurora Natola-Ginastera visit Ann Arbor, followed in January with the world premiere of Ginastera's Second Piano Sonata.
Sunday, October 18 at 4:00, in Rackham Auditorium: a recital featuring Ginastera's Piano Sonata No. 1, performed by Anthony di Bonaventura, and the Cello Sonata No. 1, per?formed by Aurora Natola-Ginastera. Mozart's Piano Sonata in D, K. 576, and Bach's Cello Suite No. 3 round out the program.
Tickets at $5.50, $7.00, and $8.50.
Tuesday, October 20 at 8:00, in Hill Auditorium, in collaboration with the School of Music: Variazioni e Toccata for solo organ, Serenata for cello, baritone, and ensemble, and the Piano Concerto No. 1. Performers are Anthony di Bonaventura, Aurora Natola-Ginastera. Leslie Guinn, Marilyn Mason, Contemporary Directions Ensemble, University Symphony Orchestra, Carl St. Clair and Gustav Meier, conductors.
All tickets $5.00, general admission, unreserved seating.
Friday, January 29 at 8:00, in Rackham Auditorium: Anthony di Bonaventura will return to Ann Arbor to give the world premiere of Ginastera's Piano Sonata No. 2 (originally scheduled for the October 18 concert). Immediately following the performance of the premiere. the pianist will conduct a master class for School of Music students. Concertgoers are invited to attend both events, which will be free and open to the public.
UNIVERSITY MUSICAL SOCIETY
Burton Memorial Tower, Ann Arbor, Michigan 48109 Phone: 665-3717, 764-2538