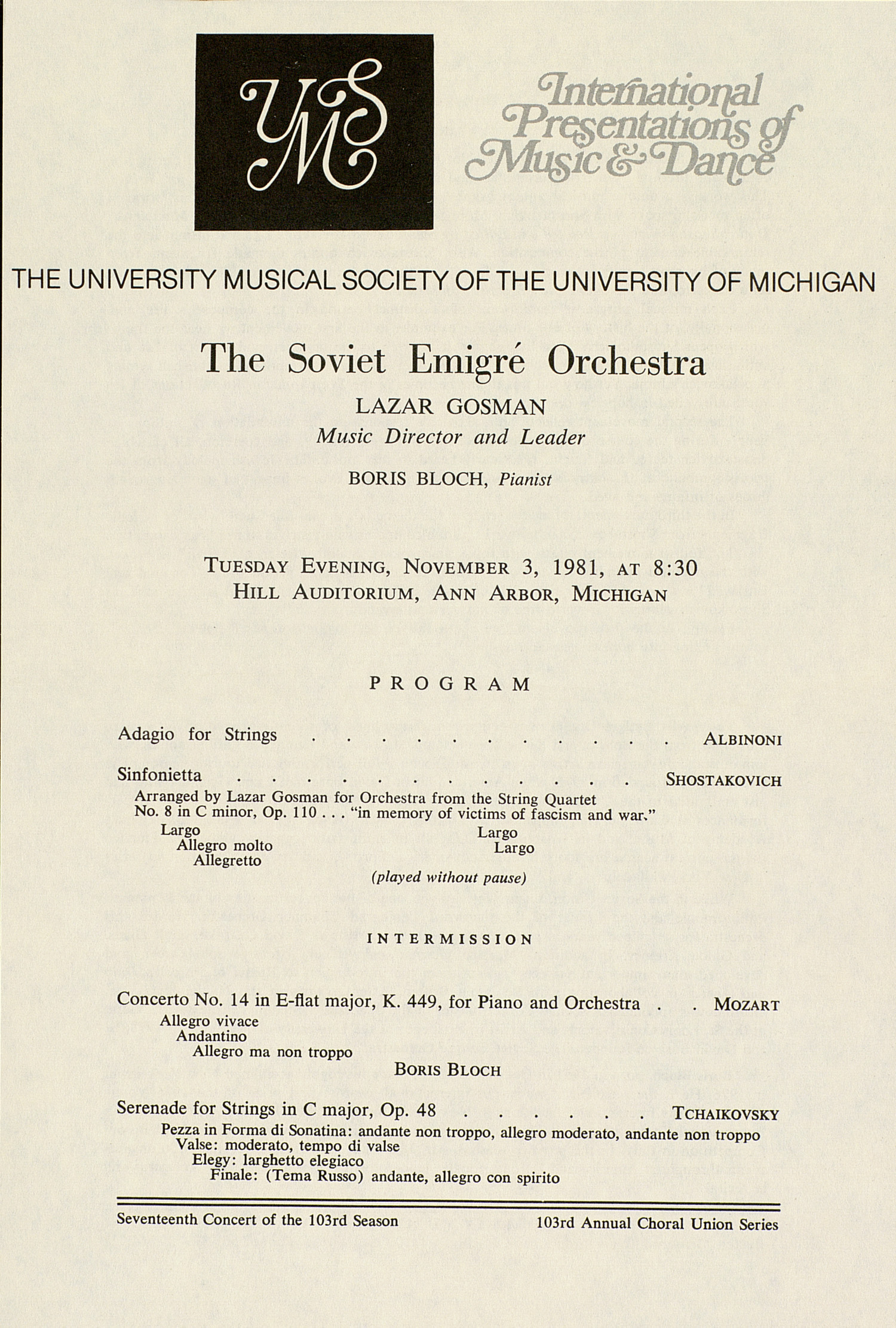 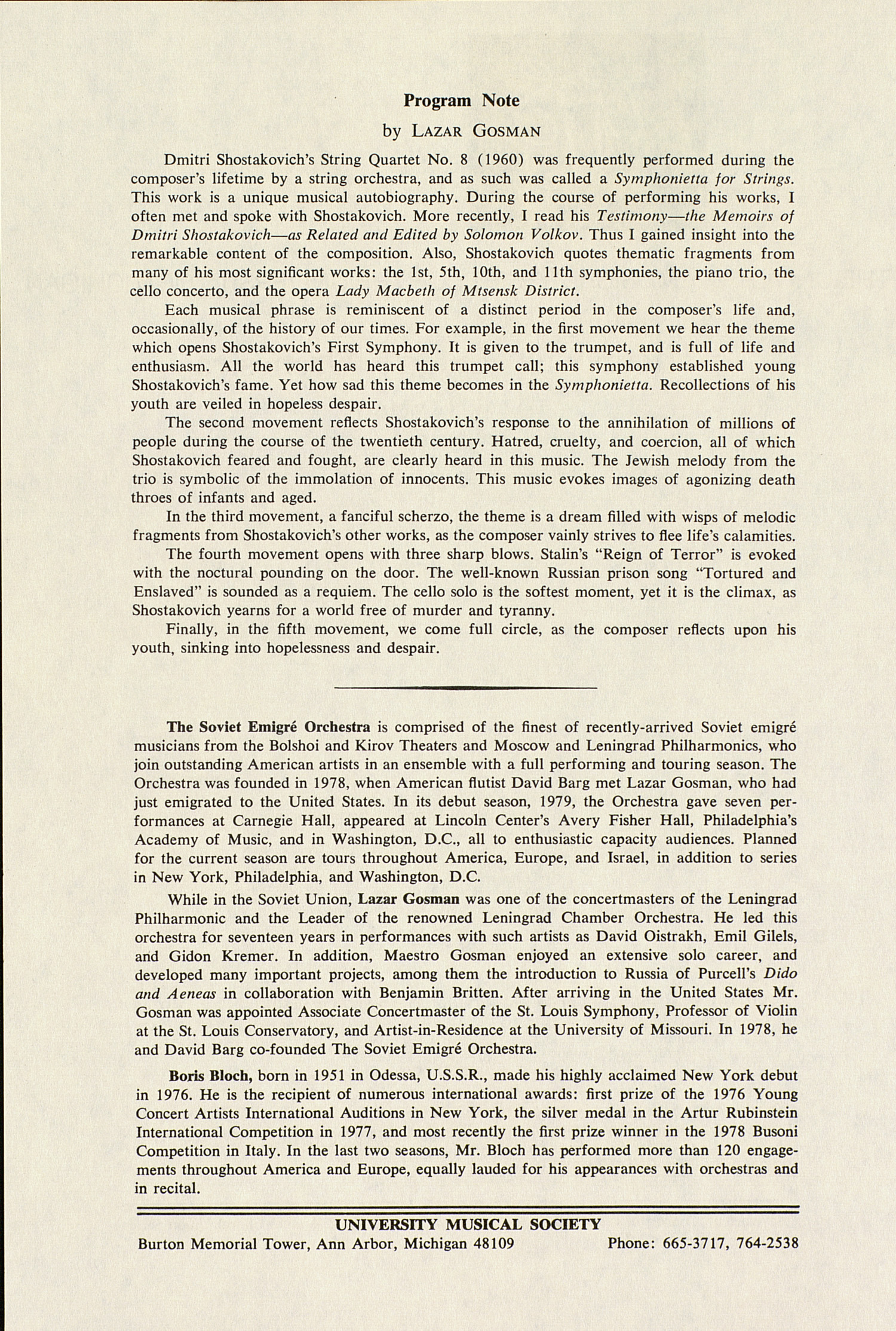 THE UNIVERSITY MUSICAL SOCIETY OF THE UNIVERSITY OF MICHIGAN
The Soviet Emigre Orchestra
LAZAR GOSMAN Music Director and Leader
BORIS BLOCH, Pianist
Tuesday Evening, November 3, 1981, at 8:30 Hill Auditorium, Ann Arbor, Michigan
PROGRAM
Adagio for Strings...........Albinoni
Sinfonietta............Shostakovich
Arranged by Lazar Gosman for Orchestra from the String Quartet No. 8 in C minor, Op. 110 ... "in memory of victims of fascism and war" Largo Largo
Allegro molto Largo
Allegretto
(played without pause)
INTERMISSION
Concerto No. 14 in E-flat major, K. 449, for Piano and Orchestra . . Mozart
Allegro vivace Andantino
Allegro ma non troppo
Boris Bloch
Serenade for Strings in C major, Op. 48......Tchaikovsky
Pezza in Forma di Sonatina: andante non troppo, allegro moderate andante non troppo Valse: moderato, tempo di valse Elegy: larghetto elegiaco
Finale: (Tema Russo) andante, allegro con spirito
Seventeenth Concert of the 103rd Season 103rd Annual Choral Union Series
Program Note
by Lazar Gosman
Dmitri Shostakovich's String Quartet No. 8 (1960) was frequently performed during the composer's lifetime by a string orchestra, and as such was called a Symphonietta for Strings. This work is a unique musical autobiography. During the course of performing his works, I often met and spoke with Shostakovich. More recently, I read his Testimony--the Memoirs of Dmitri Shostakovich--as Related and Edited by Solomon Volkov. Thus I gained insight into the remarkable content of the composition. Also, Shostakovich quotes thematic fragments from many of his most significant works: the 1st, 5th, 10th, and 11th symphonies, the piano trio, the cello concerto, and the opera Lady Macbeth of Mtsensk District.
Each musical phrase is reminiscent of a distinct period in the composer's life and, occasionally, of the history of our times. For example, in the first movement we hear the theme which opens Shostakovich's First Symphony. It is given to the trumpet, and is full of life and enthusiasm. All the world has heard this trumpet call; this symphony established young Shostakovich's fame. Yet how sad this theme becomes in the Symphonietta. Recollections of his youth are veiled in hopeless despair.
The second movement reflects Shostakovich's response to the annihilation of millions of people during the course of the twentieth century. Hatred, cruelty, and coercion, all of which Shostakovich feared and fought, are clearly heard in this music. The Jewish melody from the trio is symbolic of the immolation of innocents. This music evokes images of agonizing death throes of infants and aged.
In the third movement, a fanciful scherzo, the theme is a dream filled with wisps of melodic fragments from Shostakovich's other works, as the composer vainly strives to flee life's calamities.
The fourth movement opens with three sharp blows. Stalin's "Reign of Terror" is evoked with the noctural pounding on the door. The well-known Russian prison song "Tortured and Enslaved" is sounded as a requiem. The cello solo is the softest moment, yet it is the climax, as Shostakovich yearns for a world free of murder and tyranny.
Finally, in the fifth movement, we come full circle, as the composer reflects upon his youth, sinking into hopelessness and despair.
The Soviet Emigre Orchestra is comprised of the finest of recently-arrived Soviet emigre musicians from the Bolshoi and Kirov Theaters and Moscow and Leningrad Philharmonics, who join outstanding American artists in an ensemble with a full performing and touring season. The Orchestra was founded in 1978, when American flutist David Barg met Lazar Gosman, who had just emigrated to the United States. In its debut season, 1979, the Orchestra gave seven per?formances at Carnegie Hall, appeared at Lincoln Center's Avery Fisher Hall, Philadelphia's Academy of Music, and in Washington, D.C., all to enthusiastic capacity audiences. Planned for the current season are tours throughout America, Europe, and Israel, in addition to series in New York, Philadelphia, and Washington, D.C.
While in the Soviet Union, Lazar Gosman was one of the concertmasters of the Leningrad Philharmonic and the Leader of the renowned Leningrad Chamber Orchestra. He led this orchestra for seventeen years in performances with such artists as David Oistrakh, Emil Gilels, and Gidon Kremer. In addition, Maestro Gosman enjoyed an extensive solo career, and developed many important projects, among them the introduction to Russia of Purcell's Dido and Aeneas in collaboration with Benjamin Britten. After arriving in the United States Mr. Gosman was appointed Associate Concertmaster of the St. Louis Symphony, Professor of Violin at the St. Louis Conservatory, and Artist-in-Residence at the University of Missouri. In 1978, he and David Barg co-founded The Soviet Emigre Orchestra.
Boris Bloch, born in 1951 in Odessa, U.S.S.R., made his highly acclaimed New York debut in 1976. He is the recipient of numerous international awards: first prize of the 1976 Young Concert Artists International Auditions in New York, the silver medal in the Artur Rubinstein International Competition in 1977, and most recently the first prize winner in the 1978 Busoni Competition in Italy. In the last two seasons, Mr. Bloch has performed more than 120 engage?ments throughout America and Europe, equally lauded for his appearances with orchestras and in recital.
UNIVERSITY MUSICAL SOCIETY
Burton Memorial Tower, Ann Arbor, Michigan 48109 Phone: 665-3717, 764-2538