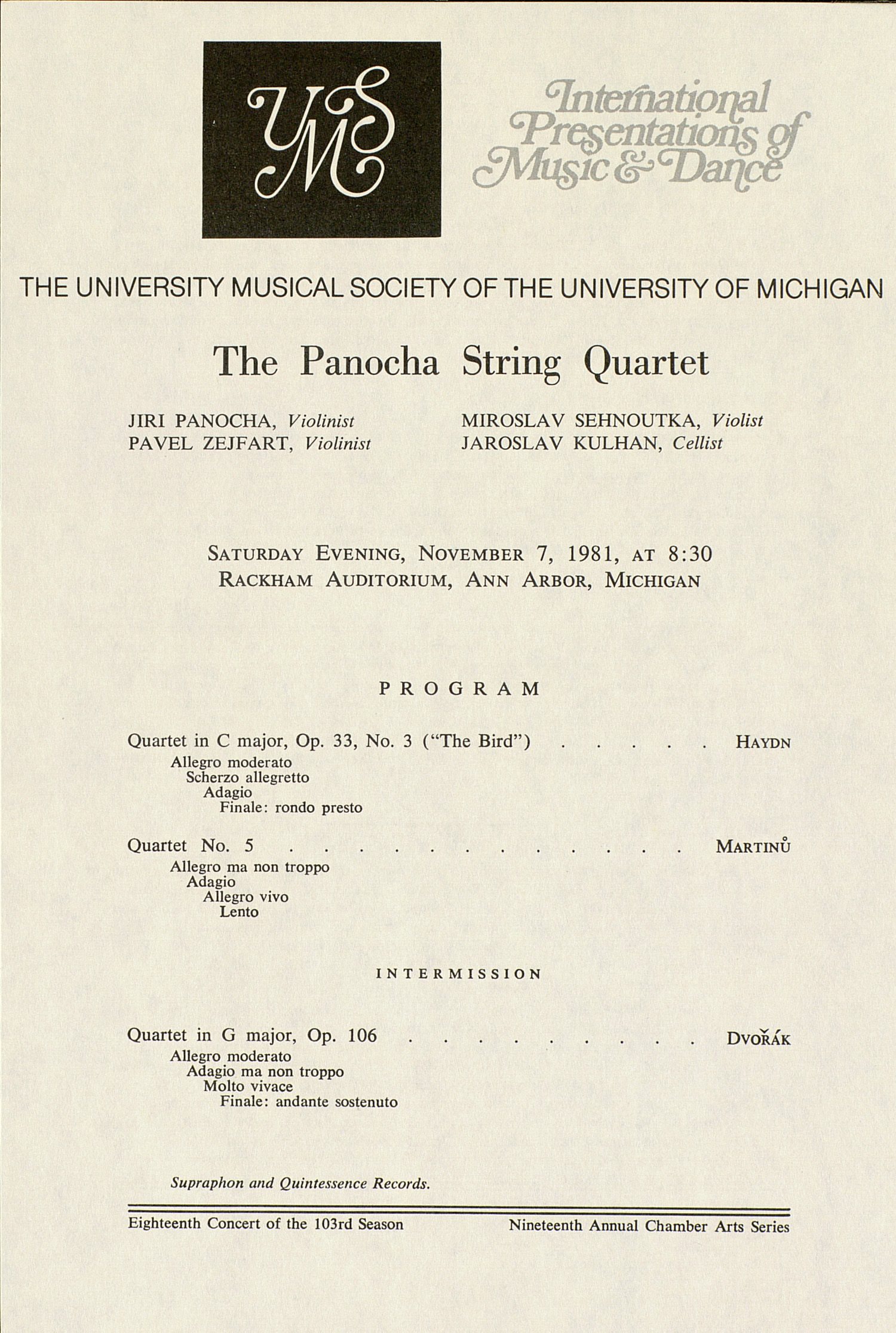 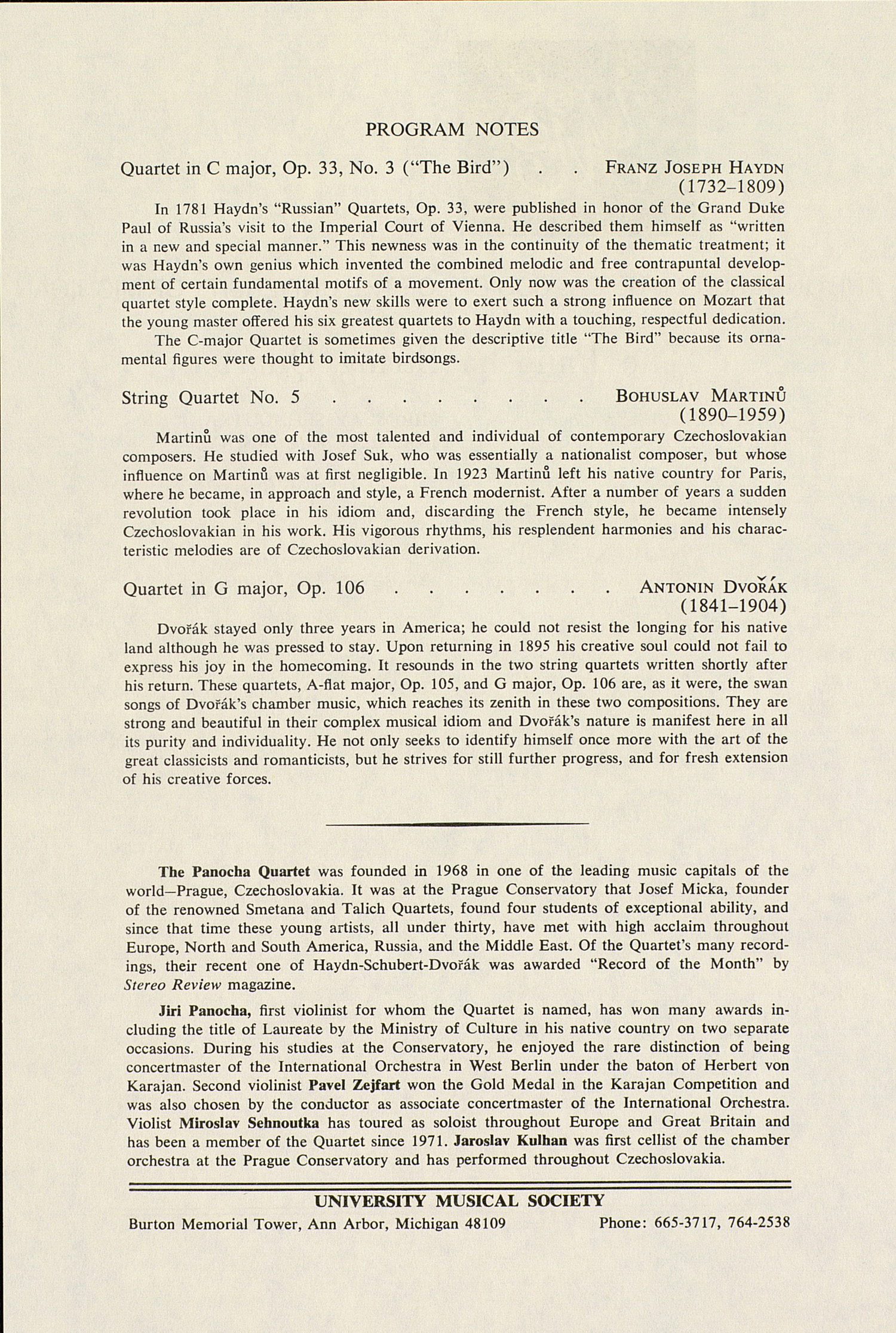 THE UNIVERSITY MUSICAL SOCIETY OF THE UNIVERSITY OF MICHIGAN
The Panocha String Quartet
JIRI PANOCHA, Violinist PAVEL ZEJFART, Violinist
MIROSLAV SEHNOUTKA, Violist JAROSLAV KULHAN, Cellist
Saturday Evening, November 7, 1981, at 8:30 Rackham Auditorium, Ann Arbor, Michigan
PROGRAM
Quartet in C major, Op. 33, No. 3 ("The Bird")
Allegro moderato Scherzo allegretto Adagio
Finale: rondo presto
Quartet No. 5 .
Allegro ma non troppo Adagio
Allegro vivo Lento
Haydn
Martinu
INTERMISSION
Quartet in G major, Op. 106
Allegro moderato
Adagio ma non troppo Molto vivace
Finale: andante sostenuto
Dvorak
Supraphon and Quintessence Records.
Eighteenth Concert of the 103rd Season
Nineteenth Annual Chamber Arts Series
PROGRAM NOTES
Quartet in C major, Op. 33, No. 3 ("The Bird") . . Franz Joseph Haydn
(1732-1809)
In 1781 Haydn's "Russian" Quartets, Op. 33, were published in honor of the Grand Duke Paul of Russia's visit to the Imperial Court of Vienna. He described them himself as "written in a new and special manner." This newness was in the continuity of the thematic treatment; it was Haydn's own genius which invented the combined melodic and free contrapuntal develop?ment of certain fundamental motifs of a movement. Only now was the creation of the classical quartet style complete. Haydn's new skills were to exert such a strong influence on Mozart that the young master offered his six greatest quartets to Haydn with a touching, respectful dedication.
The C-major Quartet is sometimes given the descriptive title "The Bird" because its orna?mental figures were thought to imitate birdsongs.
String Quartet No. 5........Bohuslav Martinu
(1890-1959)
Martinu was one of the most talented and individual of contemporary Czechoslovakian composers. He studied with Josef Suk, who was essentially a nationalist composer, but whose influence on Martinu was at first negligible. In 1923 Martinu left his native country for Paris, where he became, in approach and style, a French modernist. After a number of years a sudden revolution took place in his idiom and, discarding the French style, he became intensely Czechoslovakian in his work. His vigorous rhythms, his resplendent harmonies and his charac?teristic melodies are of Czechoslovakian derivation.
Quartet in G major, Op. 106.......Antonin Dvorak
(1841-1904)
Dvorak stayed only three years in America; he could not resist the longing for his native land although he was pressed to stay. Upon returning in 1895 his creative soul could not fail to express his joy in the homecoming. It resounds in the two string quartets written shortly after his return. These quartets, A-flat major, Op. 105, and G major, Op. 106 are, as it were, the swan songs of Dvorak's chamber music, which reaches its zenith in these two compositions. They are strong and beautiful in their complex musical idiom and Dvorak's nature is manifest here in all its purity and individuality. He not only seeks to identify himself once more with the art of the great classicists and romanticists, but he strives for still further progress, and for fresh extension of his creative forces.
The Panocha Quartet was founded in 1968 in one of the leading music capitals of the world--Prague, Czechoslovakia. It was at the Prague Conservatory that Josef Micka, founder of the renowned Smetana and Talich Quartets, found four students of exceptional ability, and since that time these young artists, all under thirty, have met with high acclaim throughout Europe, North and South America, Russia, and the Middle East. Of the Quartet's many record?ings, their recent one of Haydn-Schubert-Dvofak was awarded "Record of the Month" by Stereo Review magazine.
Jiri Panocha, first violinist for whom the Quartet is named, has won many awards in?cluding the title of Laureate by the Ministry of Culture in his native country on two separate occasions. During his studies at the Conservatory, he enjoyed the rare distinction of being concertmaster of the International Orchestra in West Berlin under the baton of Herbert von Karajan. Second violinist Pavel Zejfart won the Gold Medal in the Karajan Competition and was also chosen by the conductor as associate concertmaster of the International Orchestra. Violist Miroslav Sehnoutka has toured as soloist throughout Europe and Great Britain and has been a member of the Quartet since 1971. Jaroslav Kulhan was first cellist of the chamber orchestra at the Prague Conservatory and has performed throughout Czechoslovakia.
UNIVERSITY MUSICAL SOCIETY
Burton Memorial Tower, Ann Arbor, Michigan 48109 Phone: 665-3717, 764-2538