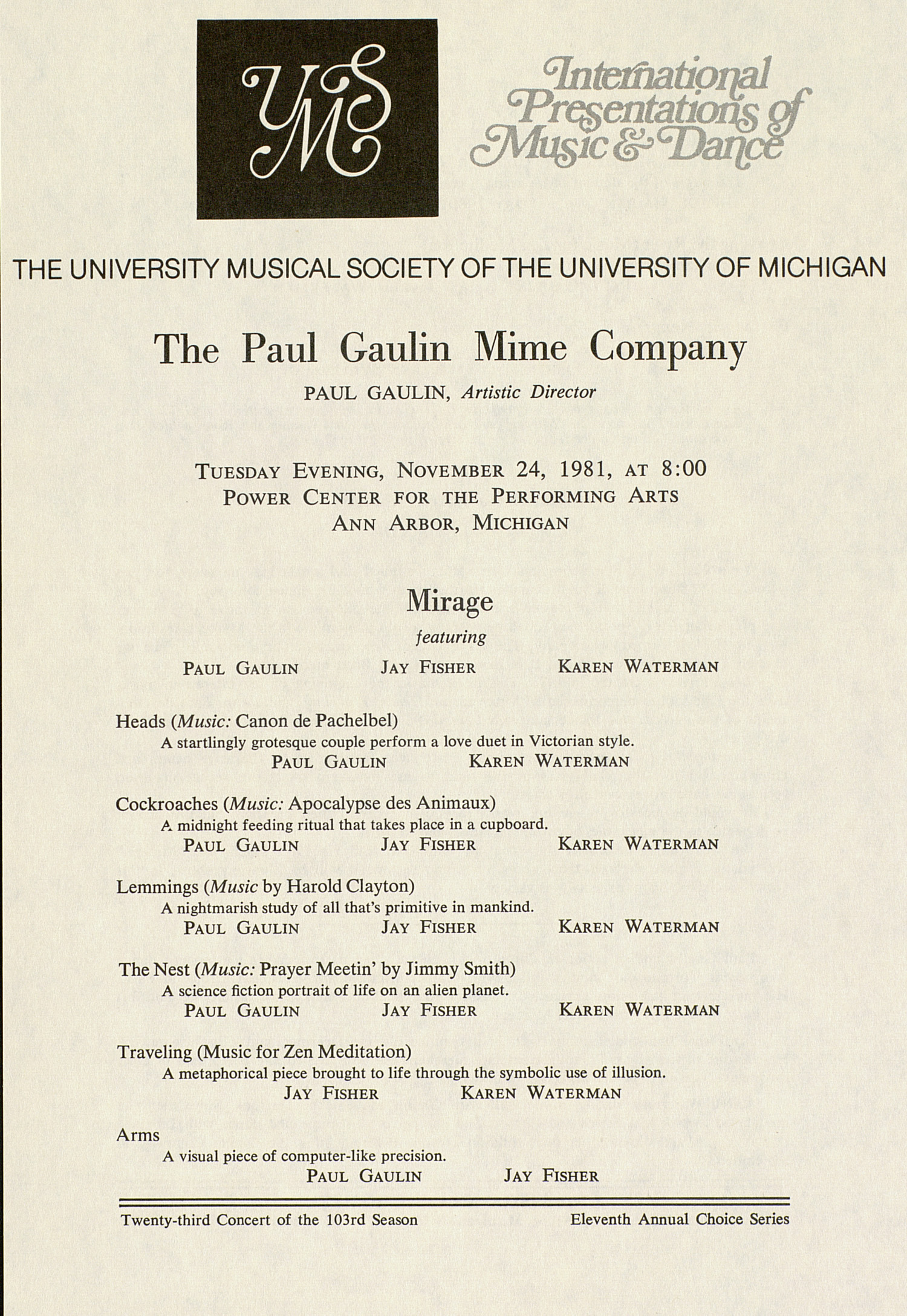 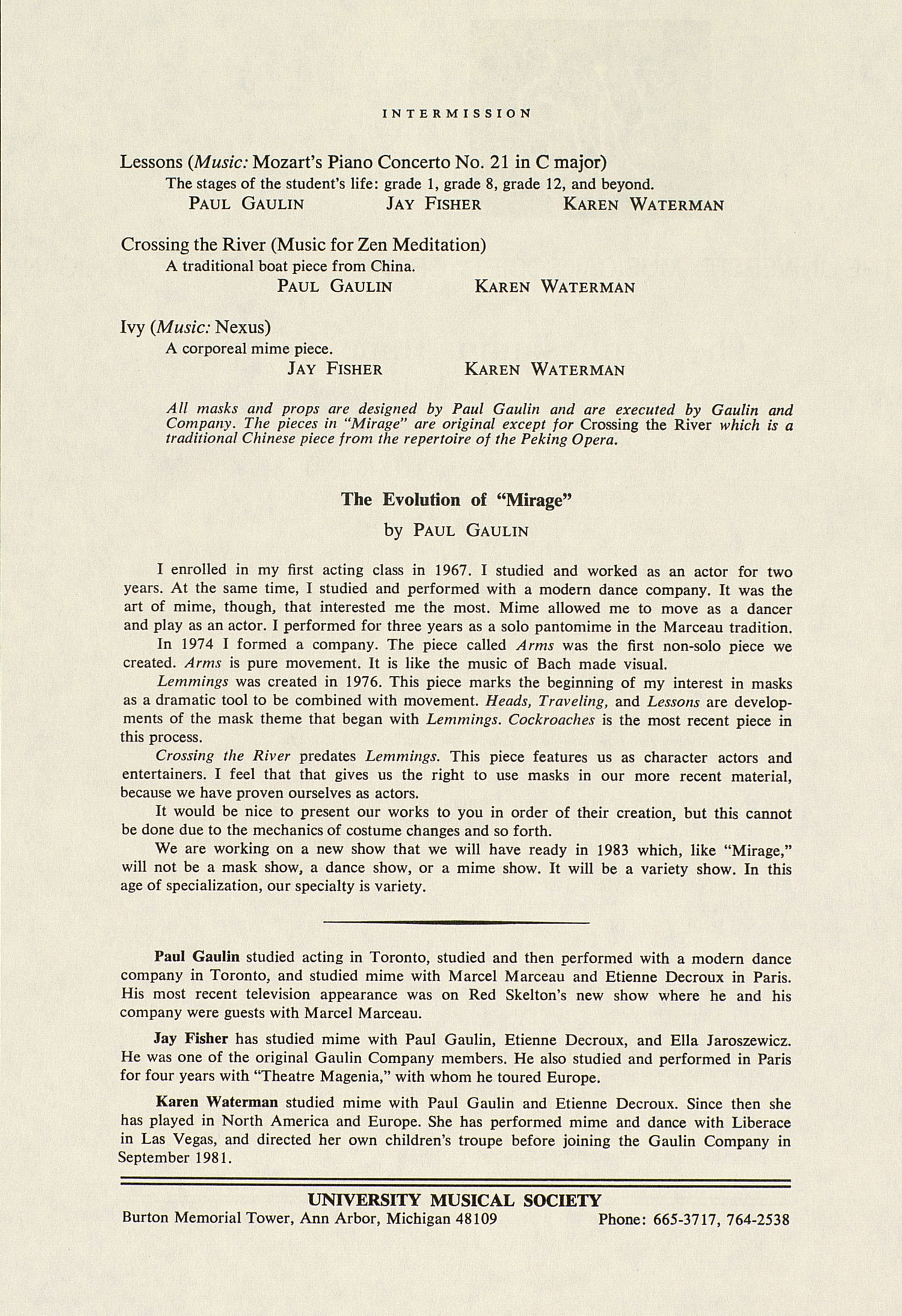 THE UNIVERSITY MUSICAL SOCIETY OF THE UNIVERSITY OF MICHIGAN
The Paul Gaulin Mime Company
PAUL GAULIN, Artistic Director
Tuesday Evening, November 24, 1981, at 8:00
Power Center for the Performing Arts
Ann Arbor, Michigan
Mirage
featuring Paul Gaulin Jay Fisher Karen Waterman
Heads (Music: Canon de Pachelbel)
A startlingly grotesque couple perform a love duet in Victorian style. Paul Gaulin Karen Waterman
Cockroaches (Music: Apocalypse des Animaux)
A midnight feeding ritual that takes place in a cupboard.
Paul Gaulin Jay Fisher Karen Waterman
Lemmings (Music by Harold Clayton)
A nightmarish study of all that's primitive in mankind.
Paul Gaulin Jay Fisher Karen Waterman
The Nest (Music: Prayer Meetin' by Jimmy Smith) A science fiction portrait of life on an alien planet.
Paul Gaulin Jay Fisher Karen Waterman
Traveling (Music for Zen Meditation)
A metaphorical piece brought to life through the symbolic use of illusion. Jay Fisher Karen Waterman
Arms
A visual piece of computer-like precision.
Paul Gaulin Jay Fisher
Twenty-third Concert of the 103rd Season Eleventh Annual Choice Series
INTERMISSION
Lessons (Music: Mozart's Piano Concerto No. 21 in C major)
The stages of the student's life: grade 1, grade 8, grade 12, and beyond.
Paul Gaulin Jay Fisher Karen Waterman
Crossing the River (Music for Zen Meditation) A traditional boat piece from China.
Paul Gaulin Karen Waterman
Ivy (Music: Nexus)
A corporeal mime piece.
Jay Fisher Karen Waterman
All masks and props are designed by Paul Gaulin and are executed by Gaulin and Company. The pieces in "Mirage" are original except for Crossing the River which is a traditional Chinese piece from the repertoire of the Peking Opera.
The Evolution of "Mirage"
by Paul Gaulin
I enrolled in my first acting class in 1967. I studied and worked as an actor for two years. At the same time, I studied and performed with a modern dance company. It was the art of mime, though, that interested me the most. Mime allowed me to move as a dancer and play as an actor. I performed for three years as a solo pantomime in the Marceau tradition.
In 1974 I formed a company. The piece called Arms was the first non-solo piece we created. Arms is pure movement. It is like the music of Bach made visual.
Lemmings was created in 1976. This piece marks the beginning of my interest in masks as a dramatic tool to be combined with movement. Heads, Traveling, and Lessons are develop?ments of the mask theme that began with Lemmings. Cockroaches is the most recent piece in this process.
Crossing the River predates Lemmings. This piece features us as character actors and entertainers. I feel that that gives us the right to use masks in our more recent material, because we have proven ourselves as actors.
It would be nice to present our works to you in order of their creation, but this cannot be done due to the mechanics of costume changes and so forth.
We are working on a new show that we will have ready in 1983 which, like "Mirage," will not be a mask show, a dance show, or a mime show. It will be a variety show. In this age of specialization, our specialty is variety.
Paul Gaulin studied acting in Toronto, studied and then performed with a modern dance company in Toronto, and studied mime with Marcel Marceau and Etienne Decroux in Paris. His most recent television appearance was on Red Skelton's new show where he and his company were guests with Marcel Marceau.
Jay Fisher has studied mime with Paul Gaulin, Etienne Decroux, and Ella Jaroszewicz. He was one of the original Gaulin Company members. He also studied and performed in Paris for four years with "Theatre Magenia," with whom he toured Europe.
Karen Waterman studied mime with Paul Gaulin and Etienne Decroux. Since then she has played in North America and Europe. She has performed mime and dance with Liberace in Las Vegas, and directed her own children's troupe before joining the Gaulin Company in September 1981.
UNIVERSITY MUSICAL SOCIETY
Burton Memorial Tower, Ann Arbor, Michigan 48109 Phone: 665-3717, 764-2538