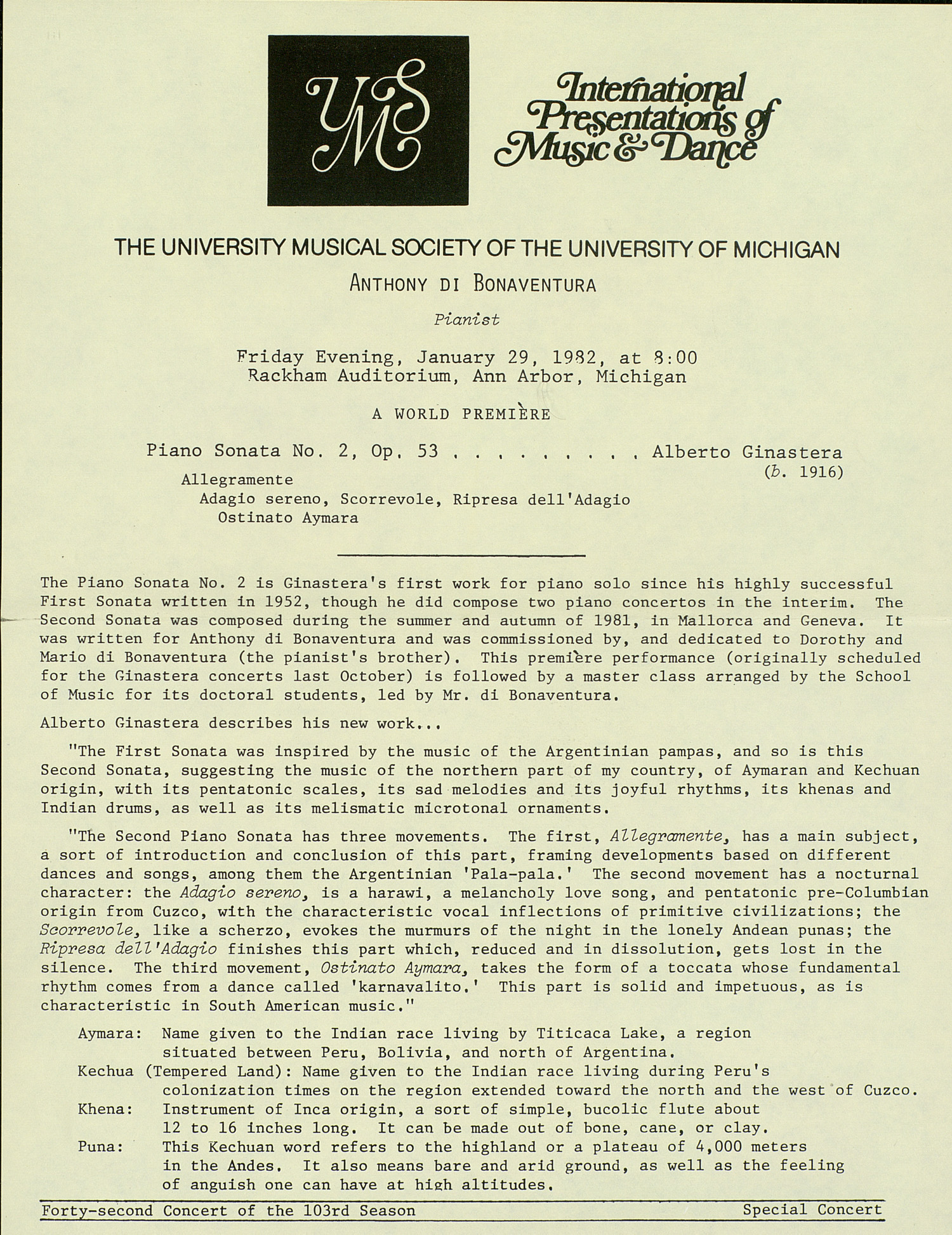 THE UNIVERSITY MUSICAL SOCIETY OF THE UNIVERSITY OF MICHIGAN
Anthony di Bonaventura
Pianist
Friday Evening, January 29, 1982, at 8:00 Rackham Auditorium, Ann Arbor, Michigan
A WORLD PREMIERE
Piano Sonata No. 2, Op. 53.........Alberto Ginastera
Allegramente &' 1916)
Adagio sereno, Scorrevole, Ripresa dell'Adagio Ostinato Aymara
The Piano Sonata No. 2 is Ginastera's first work for piano solo since his highly successful First Sonata written in 1952, though he did compose two piano concertos in the interim. The Second Sonata was composed during the summer and autumn of 1981, in Mallorca and Geneva. It was written for Anthony di Bonaventura and was commissioned by, and dedicated to Dorothy and Mario di Bonaventura (the pianist's brother). This premiere performance (originally scheduled for the Ginastera concerts last October) is followed by a master class arranged by the School of Music for its doctoral students, led by Mr. di Bonaventura.
Alberto Ginastera describes his new work...
"The First Sonata was inspired by the music of the Argentinian pampas, and so is this Second Sonata, suggesting the music of the northern part of my country, of Aymaran and Kechuan origin, with its pentatonic scales, its sad melodies and its joyful rhythms, its khenas and Indian drums, as well as its melismatic microtonal ornaments.
"The Second Piano Sonata has three movements. The first, Allegramente, has a main subject, a sort of introduction and conclusion of this part, framing developments based on different dances and songs, among them the Argentinian 'Pala-pala.' The second movement has a nocturnal character: the Adagio sereno, is a harawi, a melancholy love song, and pentatonic pre-Columbian origin from Cuzco, with the characteristic vocal inflections of primitive civilizations; the Soorrevole, like a scherzo, evokes the murmurs of the night in the lonely Andean punas; the Eipresa dellAdagio finishes this part which, reduced and in dissolution, gets lost in the silence. The third movement, Ostinato Aymara, takes the form of a toccata whose fundamental rhythm comes from a dance called 'karnavalito.' This part is solid and impetuous, as is characteristic in South American music."
Aymara: Name given to the Indian race living by Titicaca Lake, a region
situated between Peru, Bolivia, and north of Argentina. Kechua (Tempered Land): Name given to the Indian race living during Peru's
colonization times on the region extended toward the north and the west of Cuzco. Khena: Instrument of Inca origin, a sort of simple, bucolic flute about
12 to 16 inches long. It can be made out of bone, cane, or clay. Puna: This Kechuan word refers to the highland or a plateau of 4,000 meters
in the Andes. It also means bare and arid ground, as well as the feeling
of anguish one can have at high altitudes.
Forty-second Concert of the 103rd Season Special Concert