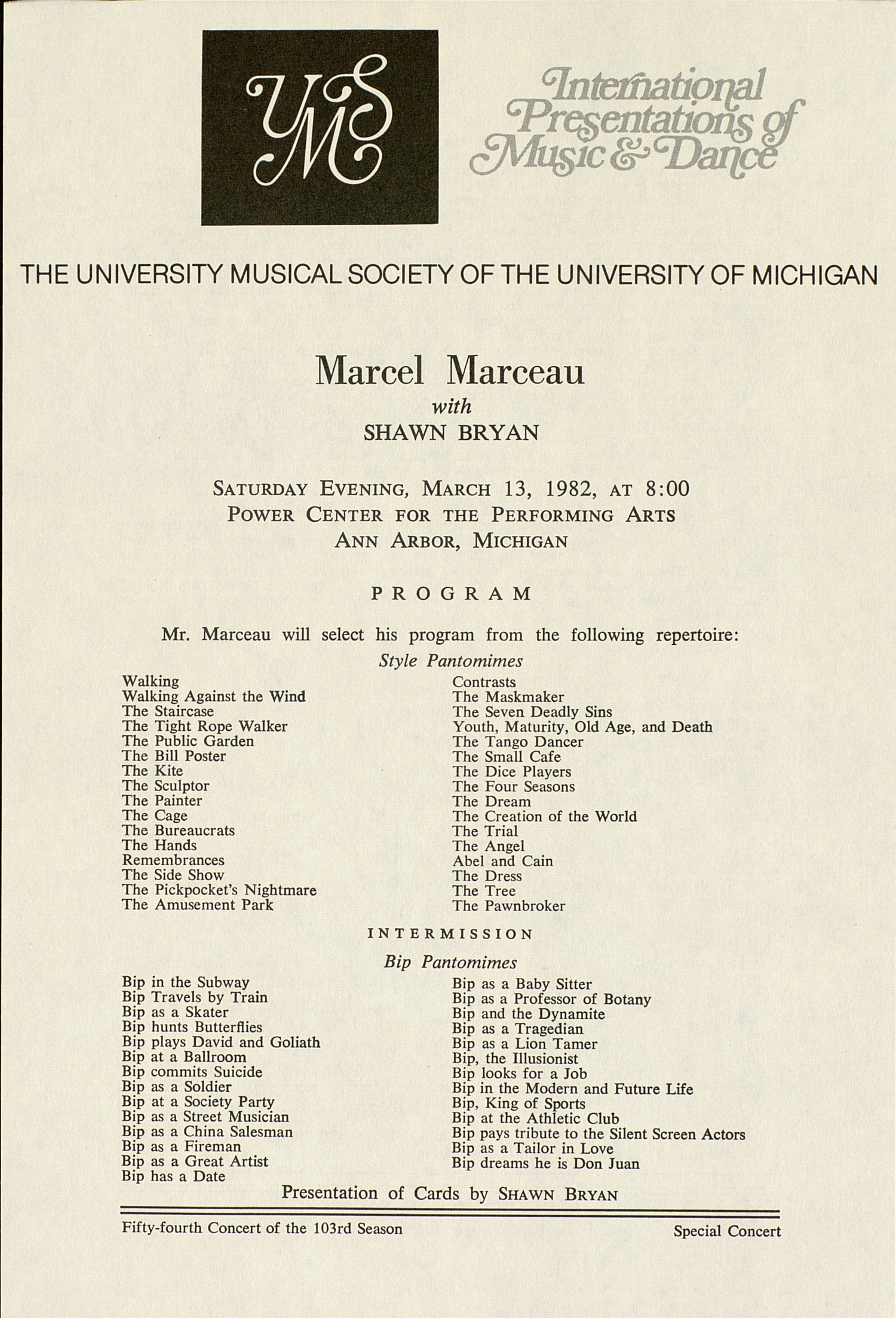 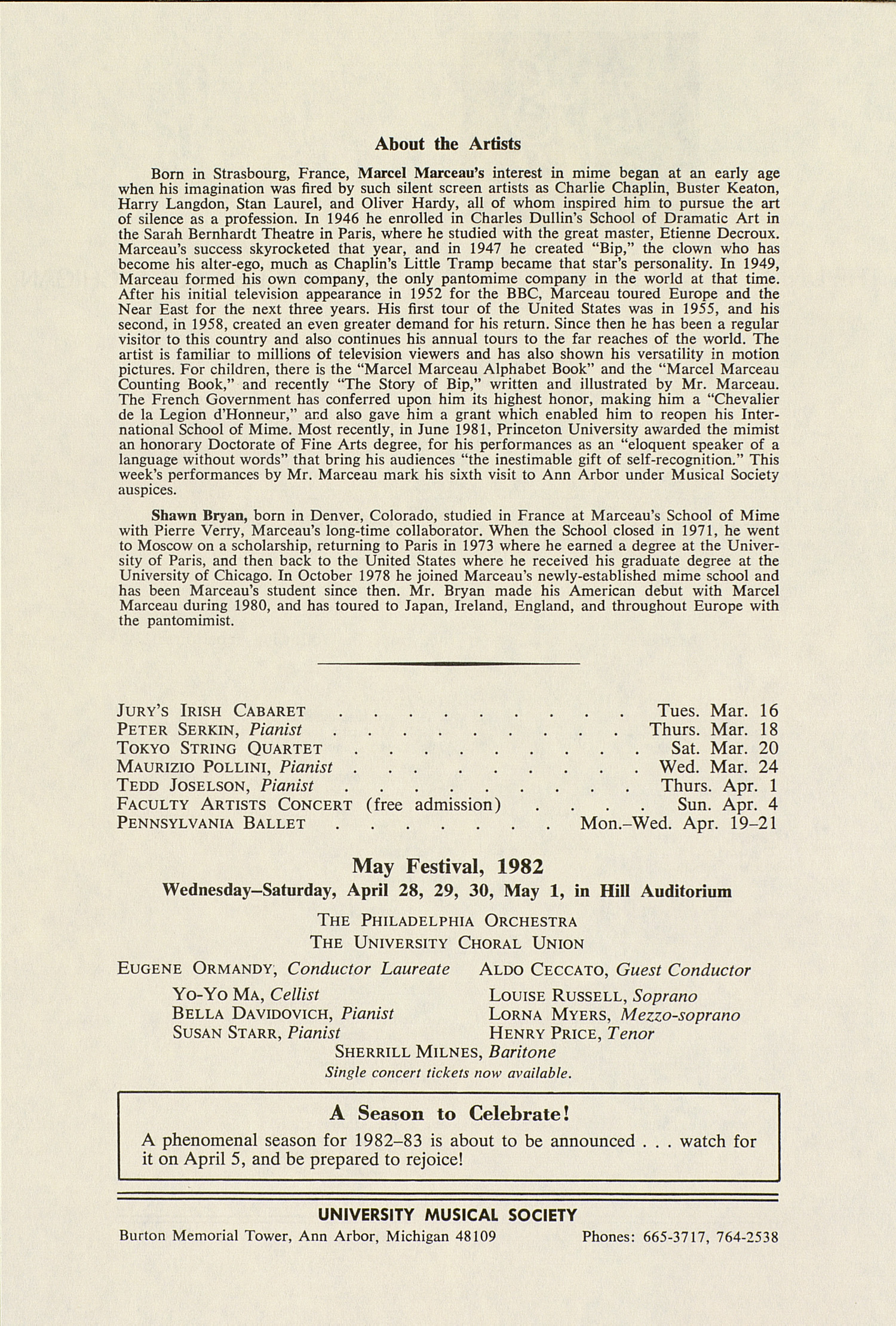 nteiMtiQijal
THE UNIVERSITY MUSICAL SOCIETY OF THE UNIVERSITY OF MICHIGAN
Marcel Marceau
with SHAWN BRYAN
Saturday Evening, March 13, 1982, at 8:00
Power Center for the Performing Arts
Ann Arbor, Michigan
PROGRAM
Mr. Marceau will select his program from the following repertoire:
Walking
Walking Against the Wind
The Staircase
The Tight Rope Walker
The Public Garden
The Bill Poster
The Kite
The Sculptor
The Painter
The Cage
The Bureaucrats
The Hands
Remembrances
The Side Show
The Pickpocket's Nightmare
The Amusement Park
Style Pantomimes
Contrasts
The Maskmaker
The Seven Deadly Sins
Youth, Maturity, Old Age, and Death
The Tango Dancer
The Small Cafe
The Dice Players
The Four Seasons
The Dream
The Creation of the World
The Trial
The Angel
Abel and Cain
The Dress
The Tree
The Pawnbroker
INTERMISSION
Bip in the Subway
Bip Travels by Train
Bip as a Skater
Bip hunts Butterflies
Bip plays David and Goliath
Bip at a Ballroom
Bip commits Suicide
Bip as a Soldier
Bip at a Society Party
Bip as a Street Musician
Bip as a China Salesman
Bip as a Fireman
Bip as a Great Artist
Bip has a Date
Presentation
Bip Pantomimes
Bip as a Baby Sitter
Bip as a Professor of Botany
Bip and the Dynamite
Bip as a Tragedian
Bip as a Lion Tamer
Bip, the Illusionist
Bip looks for a Job
Bip in the Modern and Future Life
Bip, King of Sports
Bip at the Athletic Club
Bip pays tribute to the Silent Screen Actors
Bip as a Tailor in Love
Bip dreams he is Don Juan
of Cards by Shawn Bryan
Fifty-fourth Concert of the 103rd Season
Special Concert
About the Artists
Born in Strasbourg, France, Marcel Marceau's interest in mime began at an early age when his imagination was fired by such silent screen artists as Charlie Chaplin, Buster Keaton, Harry Langdon, Stan Laurel, and Oliver Hardy, all of whom inspired him to pursue the art of silence as a profession. In 1946 he enrolled in Charles Dullin's School of Dramatic Art in the Sarah Bernhardt Theatre in Paris, where he studied with the great master, Etienne Decroux. Marceau's success skyrocketed that year, and in 1947 he created "Bip," the clown who has become his alter-ego, much as Chaplin's Little Tramp became that star's personality. In 1949, Marceau formed his own company, the only pantomime company in the world at that time. After his initial television appearance in 1952 for the BBC, Marceau toured Europe and the Near East for the next three years. His first tour of the United States was in 1955, and his second, in 1958, created an even greater demand for his return. Since then he has been a regular visitor to this country and also continues his annual tours to the far reaches of the world. The artist is familiar to millions of television viewers and has also shown his versatility in motion pictures. For children, there is the "Marcel Marceau Alphabet Book" and the "Marcel Marceau Counting Book," and recently "The Story of Bip," written and illustrated by Mr. Marceau. The French Government has conferred upon him its highest honor, making him a "Chevalier de la Legion d'Honneur," and also gave him a grant which enabled him to reopen his Inter?national School of Mime. Most recently, in June 1981, Princeton University awarded the mimist an honorary Doctorate of Fine Arts degree, for his performances as an "eloquent speaker of a language without words" that bring his audiences "the inestimable gift of self-recognition." This week's performances by Mr. Marceau mark his sixth visit to Ann Arbor under Musical Society auspices.
Shawn Bryan, born in Denver, Colorado, studied in France at Marceau's School of Mime with Pierre Verry, Marceau's long-time collaborator. When the School closed in 1971, he went to Moscow on a scholarship, returning to Paris in 1973 where he earned a degree at the Univer?sity of Paris, and then back to the United States where he received his graduate degree at the University of Chicago. In October 1978 he joined Marceau's newly-established mime school and has been Marceau's student since then. Mr. Bryan made his American debut with Marcel Marceau during 1980, and has toured to Japan, Ireland, England, and throughout Europe with the pantomimist.
Jury's Irish Cabaret.........Tues. Mar. 16
Peter Serkin, Pianist.........Thurs. Mar. 18
Tokyo String Quartet.........Sat. Mar. 20
Maurizio Pollini, Pianist.........Wed. Mar. 24
Tedd Joselson, Pianist.........Thurs. Apr. 1
Faculty Artists Concert (free admission) .... Sun. Apr. 4 Pennsylvania Ballet.......Mon.-Wed. Apr. 19-21
May Festival, 1982 Wednesday-Saturday, April 28, 29, 30, May 1, in Hill Auditorium
The Philadelphia Orchestra The University Choral Union
Eugene Ormandy, Conductor Laureate Aldo Ceccato, Guest Conductor
Yo-Yo Ma, Cellist Louise Russell, Soprano
Bella Davidovich, Pianist Lorna Myers, Mezzo-soprano
Susan Starr, Pianist Henry Price, Tenor
Sherrill Milnes, Baritone Single concert tickets now available.
A Season to Celebrate!
A phenomenal season for 1982-83 is about to be announced . . . watch for it on April 5, and be prepared to rejoice!
UNIVERSITY MUSICAL SOCIETY
Burton Memorial Tower, Ann Arbor, Michigan 48109 Phones: 665-3717, 764-2538