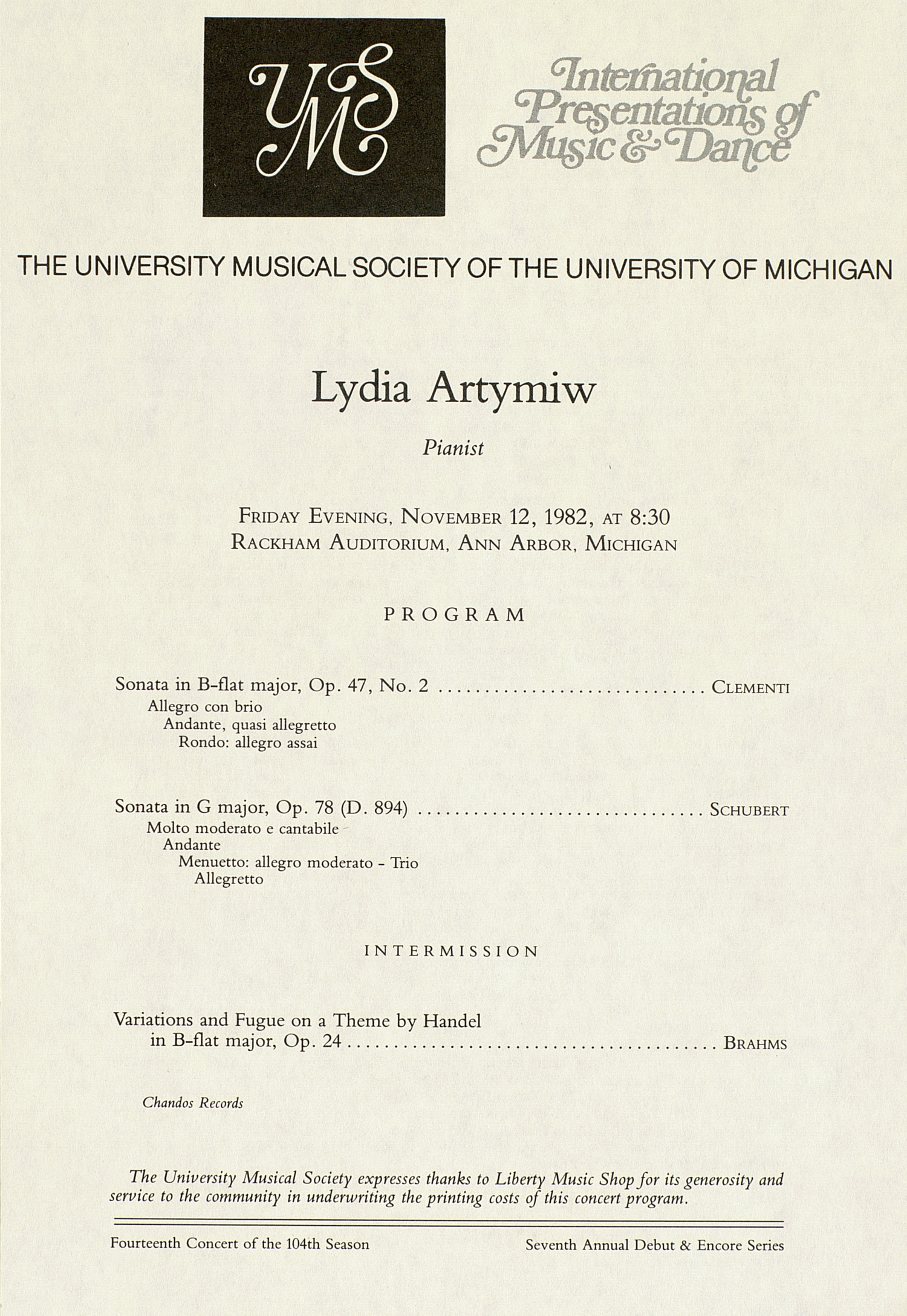 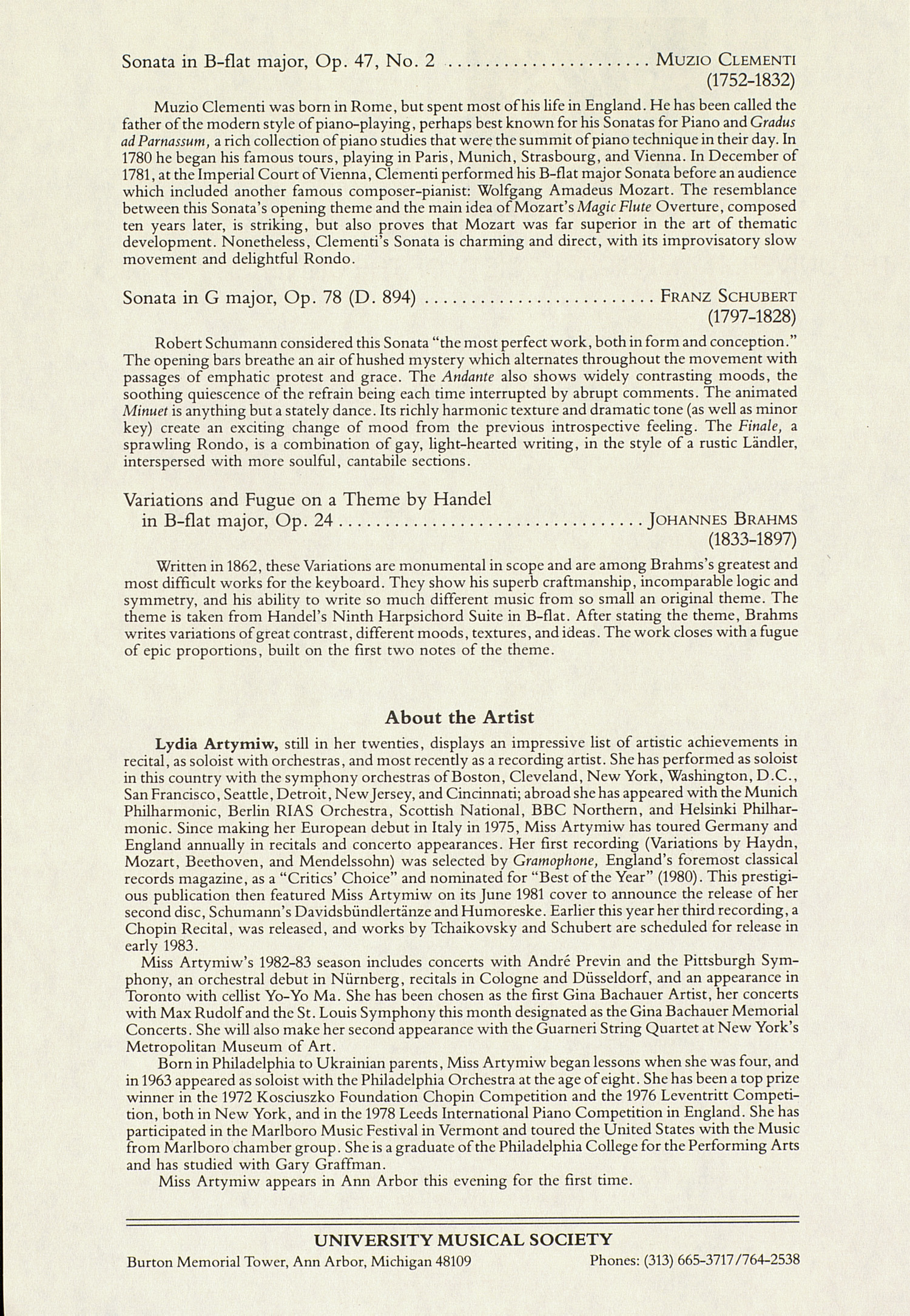 lnteifiatipnal
THE UNIVERSITY MUSICAL SOCIETY OF THE UNIVERSITY OF MICHIGAN
Lydia Artymiw
Pianist
Friday Evening, November 12, 1982, at 8:30 Rackham Auditorium, Ann Arbor, Michigan
PROGRAM
Sonata in B-flat major, Op. 47, No. 2.............................Clementi
Allegro con brio
Andante, quasi allegretto Rondo: allegro assai
Sonata in G major, Op. 78 (D. 894)...............................Schubert
Molto moderato c cantabile Andante
Menuetto: allegro moderato Trio Allegretto
INTERMISSION
Variations and Fugue on a Theme by Handel
in B-flat major, Op. 24........................................Brahms
Chandos Records
The University Musical Society expresses thanks to Liberty Music Shop for its generosity and service to the community in underwriting the printing costs of this concert program.
Fourteenth Concert of the 104th Season Seventh Annual Debut & Encore Scries
Sonata in B-flat major, Op. 47, No. 2 ......................Muzio Clementi
(1752-1832)
Muzio Clementi was born in Rome, but spent most of his life in England. He has been called the father of the modern style of piano-playing, perhaps best known for his Sonatas for Piano and Cradus ad Parnassum, a rich collection of piano studies that were the summit of piano technique in their day. In 1780 he began his famous tours, playing in Paris, Munich, Strasbourg, and Vienna. In December of 1781, at the Imperial Court of Vienna, Clementi performed his B-flat major Sonata before an audience which included another famous composer-pianist: Wolfgang Amadeus Mozart. The resemblance between this Sonata's opening theme and the main idea of Mozart's Magic Flute Overture, composed ten years later, is striking, but also proves that Mozart was far superior in the art of thematic development. Nonetheless, dementi's Sonata is charming and direct, with its improvisatory slow movement and delightful Rondo.
Sonata in G major, Op. 78 (D. 894).........................Franz Schubert
(1797-1828)
Robert Schumann considered this Sonata "the most perfect work, both in form and conception." The opening bars breathe an air of hushed mystery which alternates throughout the movement with passages of emphatic protest and grace. The Andante also shows widely contrasting moods, the soothing quiescence of the refrain being each time interrupted by abrupt comments. The animated Minuet is anything but a stately dance. Its richly harmonic texture and dramatic tone (as well as minor key) create an exciting change of mood from the previous introspective feeling. The Finale, a sprawling Rondo, is a combination of gay, light-hearted writing, in the style of a rustic Landler, interspersed with more soulful, cantabile sections.
Variations and Fugue on a Theme by Handel
in B-flat major, Op. 24.................................Johannes Brahms
(1833-1897)
Written in 1862, these Variations arc monumental in scope and are among Brahms's greatest and most difficult works for the keyboard. They show his superb craftmanship, incomparable logic and symmetry, and his ability to write so much different music from so small an original theme. The theme is taken from Handel's Ninth Harpsichord Suite in B-flat. After stating the theme, Brahms writes variations of great contrast, different moods, textures, and ideas. The work closes with a fugue of epic proportions, built on the first two notes of the theme.
About the Artist
Lydia Arty mi w, still in her twenties, displays an impressive list of artistic achievements in recital, as soloist with orchestras, and most recently as a recording artist. She has performed as soloist in this country with the symphony orchestras of Boston, Cleveland, New York, Washington, D.C., San Francisco, Seattle, Detroit, New Jersey, and Cincinnati; abroad she has appeared with the Munich Philharmonic, Berlin RIAS Orchestra, Scottish National, BBC Northern, and Helsinki Philhar?monic. Since making her European debut in Italy in 1975, Miss Artymiw has toured Germany and England annually in recitals and concerto appearances. Her first recording (Variations by Haydn, Mozart, Beethoven, and Mendelssohn) was selected by Gramophone, England's foremost classical records magazine, as a "Critics' Choice" and nominated for "Best of the Year" (1980). This prestigi?ous publication then featured Miss Artymiw on its June 1981 cover to announce the release of her second disc, Schumann's Davidsbiindlertanze and Humoreske. Earlier this year her third recording, a Chopin Recital, was released, and works by Tchaikovsky and Schubert are scheduled for release in early 1983.
Miss Artymiw's 1982-83 season includes concerts with Andre Prcvin and the Pittsburgh Sym?phony, an orchestral debut in Nurnberg, recitals in Cologne and Diisseldorf, and an appearance in Toronto with cellist Yo-Yo Ma. She has been chosen as the first Gina Bachaucr Artist, her concerts with Max Rudolf and the St. Louis Symphony this month designated as the Gina Bachauer Memorial Concerts. She will also make her second appearance with the Guarneri String Quartet at New York's Metropolitan Museum of Art.
Born in Philadelphia to Ukrainian parents, Miss Artymiw began lessons when she was four, and in 1963 appeared as soloist with the Philadelphia Orchestra at the age of eight. She has been a top prize winner in the 1972 Kosciuszko Foundation Chopin Competition and the 1976 Leventritt Competi?tion, both in New York, and in the 1978 Leeds International Piano Competition in England. She has participated in the Marlboro Music Festival in Vermont and toured the United States with the Music from Marlboro chamber group. She is a graduate of the Philadelphia College for the Performing Arts and has studied with Gary Graffman.
Miss Artymiw appears in Ann Arbor this evening for the first time.
UNIVERSITY MUSICAL SOCIETY
Burton Memorial Tower, Ann Arbor, Michigan 48109 Phones: (313) 665-3717764-2538