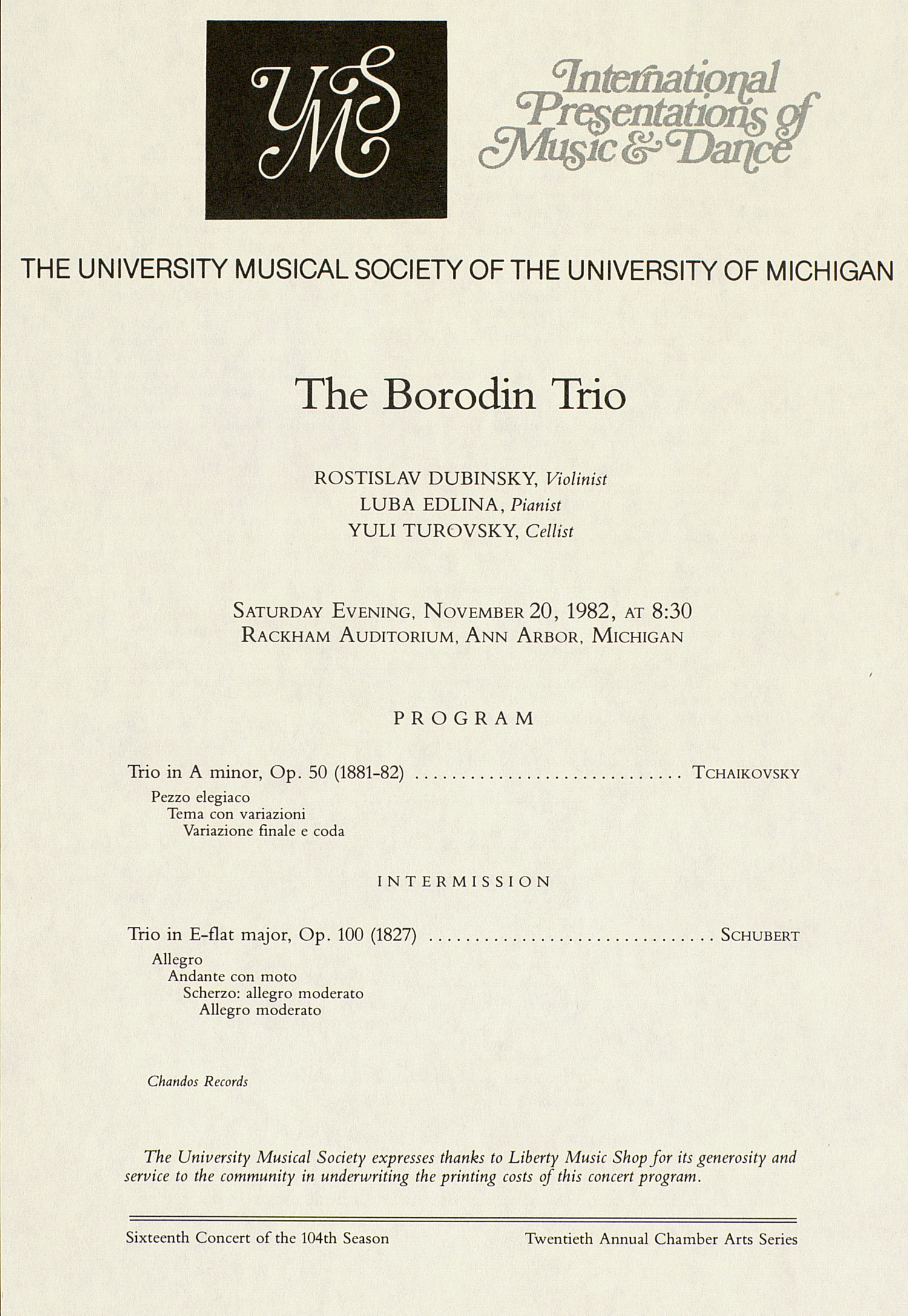 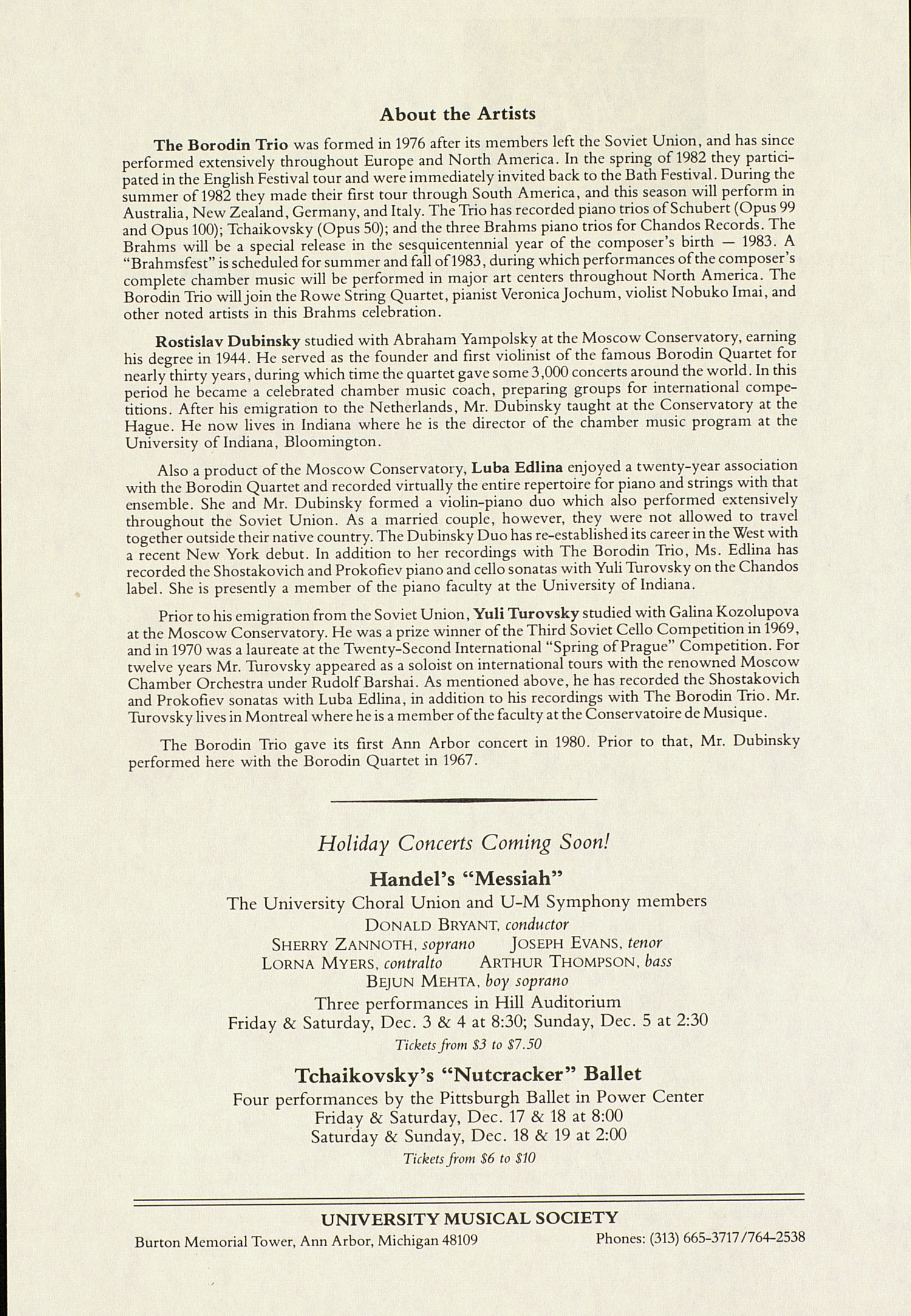 lntetfiatipnal
THE UNIVERSITY MUSICAL SOCIETY OF THE UNIVERSITY OF MICHIGAN
The Borodin Trio
ROSTISLAV DUBINSKY, Violinist
LUBA EDLINA, Pianist YULI TUROVSKY, Cellist
Saturday Evening, November 20, 1982, at 8:30 Rackham Auditorium, Ann Arbor, Michigan
PROGRAM
Trio in A minor, Op. 50 (1881-82) .............................Tchaikovsky
Pezzo elegiaco Tema con variazioni Variazione finale e coda
INTERMISSION
Trio in E-flat major, Op. 100 (1827) ...............................Schubert
Allegro
Andante con moto
Scherzo: allegro moderato Allegro moderato
Chandos Records
The University Musical Society expresses thanks to Liberty Music Shop for its generosity and service to the community in underwriting the printing costs of this concert program.
Sixteenth Concert of the 104th Season Twentieth Annual Chamber Arts Series
About the Artists
The Borodin Trio was formed in 1976 after its members left the Soviet Union, and has since performed extensively throughout Europe and North America. In the spring of 1982 they partici?pated in the English Festival tour and were immediately invited back to the Bath Festival. During the summer of 1982 they made their first tour through South America, and this season will perform in Australia, New Zealand, Germany, and Italy. The Trio has recorded piano trios of Schubert (Opus 99 and Opus 100); Tchaikovsky (Opus 50); and the three Brahms piano trios for Chandos Records. The Brahms will be a special release in the sesquiccntennial year of the composer's birth -1983. A "Brahmsfest" is scheduled for summer and fall of 1983, during which performances of the composer's complete chamber music will be performed in major art centers throughout North America. The Borodin Trio will join the Rowe String Quartet, pianist Veronica Jochum, violist Nobuko Imai, and other noted artists in this Brahms celebration.
Rostislav Dubinsky studied with Abraham Yampolsky at the Moscow Conservatory, earning his degree in 1944. He served as the founder and first violinist of the famous Borodin Quartet for nearly thirty years, during which time the quartet gave some 3,000 concerts around the world. In this period he became a celebrated chamber music coach, preparing groups for international compe?titions. After his emigration to the Netherlands, Mr. Dubinsky taught at the Conservatory at the Hague. He now lives in Indiana where he is the director of the chamber music program at the University of Indiana, Bloomington.
Also a product of the Moscow Conservatory, Luba Edlina enjoyed a twenty-year association with the Borodin Quartet and recorded virtually the entire repertoire for piano and strings with that ensemble. She and Mr. Dubinsky formed a violin-piano duo which also performed extensively throughout the Soviet Union. As a married couple, however, they were not allowed to travel together outside their native country. The Dubinsky Duo has re-established its career in the West with a recent New York debut. In addition to her recordings with The Borodin Trio, Ms. Edlina has recorded the Shostakovich and Prokofiev piano and cello sonatas with Yuli Turovsky on the Chandos label. She is presently a member of the piano faculty at the University of Indiana.
Prior to his emigration from the Soviet Union, Yuli Turovsky studied with Galina Kozolupova at the Moscow Conservatory. He was a prize winner of the Third Soviet Cello Competition in 1969, and in 1970 was a laureate at the Twenty-Second International "Spring of Prague" Competition. For twelve years Mr. Turovsky appeared as a soloist on international tours with the renowned Moscow Chamber Orchestra under Rudolf Barshai. As mentioned above, he has recorded the Shostakovich and Prokofiev sonatas with Luba Edlina, in addition to his recordings with The Borodin Trio. Mr. Turovsky lives in Montreal where he is a member of the faculty at the Conservatoire de Musique.
The Borodin Trio gave its first Ann Arbor concert in 1980. Prior to that, Mr. Dubinsky performed here with the Borodin Quartet in 1967.
Holiday Concerts Coming Soon!
Handel's "Messiah"
The University Choral Union and U-M Symphony members
Donald Bryant, conductor
Sherry Zannoth, soprano Joseph Evans, tenor
Lorna Myers, contralto Arthur Thompson, bass
Bejun Mehta, boy soprano Three performances in Hill Auditorium
Friday & Saturday, Dec. 3 & 4 at 8:30; Sunday, Dec. 5 at 2:30 Tickets from S3 to $7.50
Tchaikovsky's "Nutcracker" Ballet
Four performances by the Pittsburgh Ballet in Power Center
Friday & Saturday, Dec. 17 & 18 at 8:00
Saturday & Sunday, Dec. 18 & 19 at 2:00
Tickets from $6 to S10
UNIVERSITY MUSICAL SOCIETY
Burton Memorial Tower, Ann Arbor, Michigan 48109 Phones: (313) 665-3717764-2538