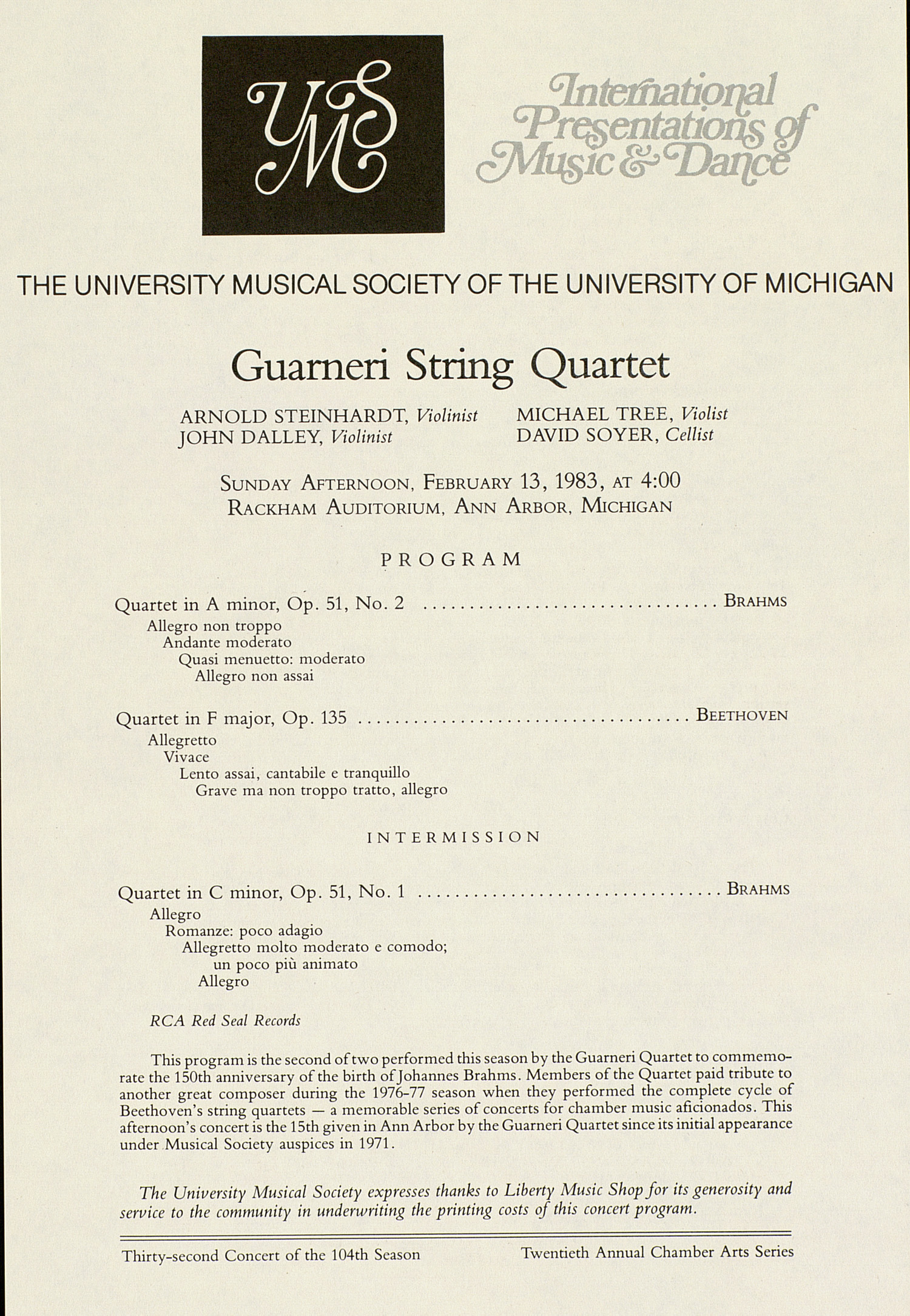 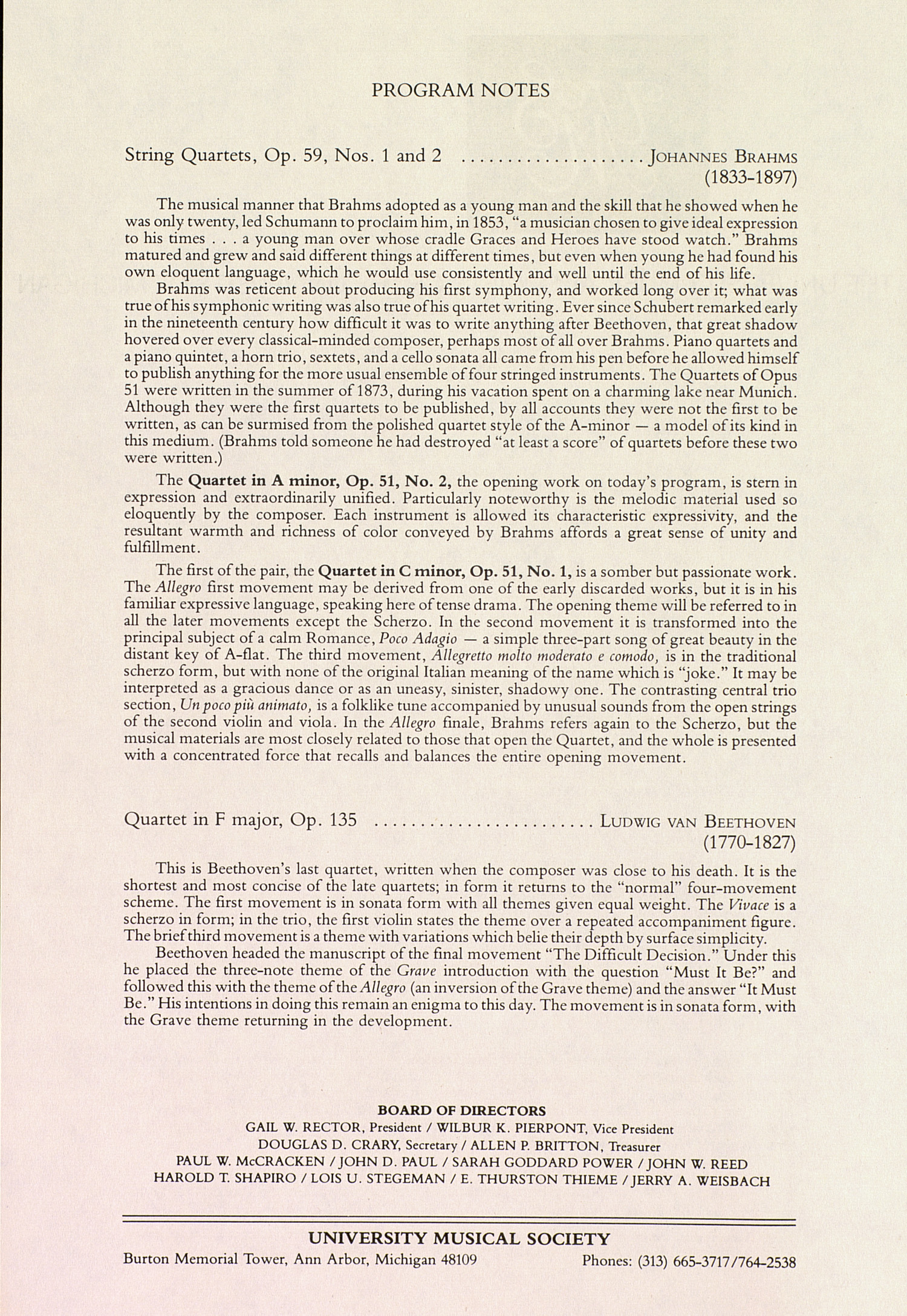 THE UNIVERSITY MUSICAL SOCIETY OF THE UNIVERSITY OF MICHIGAN
Guarneri String Quartet
ARNOLD STEINHARDT, Violinist MICHAEL TREE, Violist JOHN DALLEY, Violinist DAVID SOYER, Cellist
Sunday Afternoon, February 13, 1983, at 4:00 Rackham Auditorium, Ann Arbor, Michigan
PROGRAM
Quartet in A minor, Op. 51, No. 2 ................................Brahms
Allegro non troppo Andante moderato
Quasi menuetto: moderato Allegro non assai
Quartet in F major, Op. 135 ....................................Beethoven
Allegretto Vivace
Lento assai, cantabile c tranquillo Grave ma non troppo tratto, allegro
INTERMISSION
Quartet in C minor, Op. 51, No. 1 .................................Brahms
Allegro
Romanzc: poco adagio
Allegretto molto moderato e comodo;
un poco piu animato Allegro
RCA Red Seal Records
This program is the second of two performed this season by the Guarneri Quartet to commemo?rate the 150th anniversary of the birth of Johannes Brahms. Members of the Quartet paid tribute to another great composer during the 1976-77 season when they performed the complete cycle of Beethoven's string quartets -a memorable series of concerts for chamber music aficionados. This afternoon's concert is the 15th given in Ann Arbor by the Guarneri Quartet since its initial appearance under Musical Society auspices in 1971.
The University Musical Society expresses thanks to Liberty Music Shop for its generosity and service to the community in underwriting the printing costs of this concert program.
Thirty-second Concert of the 104th Season Twentieth Annual Chamber Arts Series
PROGRAM NOTES
String Quartets, Op. 59, Nos. 1 and 2 ....................Johannes Brahms
(1833-1897)
The musical manner that Brahms adopted as a young man and the skill that he showed when he was only twenty, led Schumann to proclaim him, in 1853, "a musician chosen to give ideal expression to his times ... a young man over whose cradle Graces and Heroes have stood watch." Brahms matured and grew and said different things at different times, but even when young he had found his own eloquent language, which he would use consistently and well until the end of his life.
Brahms was reticent about producing his first symphony, and worked long over it; what was true of his symphonic writing was also true of his quartet writing. Ever since Schubert remarked early in the nineteenth century how difficult it was to write anything after Beethoven, that great shadow hovered over every classical-minded composer, perhaps most of all over Brahms. Piano quartets and a piano quintet, a horn trio, sextets, and a cello sonata all came from his pen before he allowed himself to publish anything for the more usual ensemble of four stringed instruments. The Quartets of Opus 51 were written in the summer of 1873, during his vacation spent on a charming lake near Munich. Although they were the first quartets to be published, by all accounts they were not the first to be written, as can be surmised from the polished quartet style of the A-minor -a model of its kind in this medium. (Brahms told someone he had destroyed "at least a score" of quartets before these two were written.)
The Quartet in A minor, Op. 51, No. 2, the opening work on today's program, is stern in expression and extraordinarily unified. Particularly noteworthy is the melodic material used so eloquently by the composer. Each instrument is allowed its characteristic expressivity, and the resultant warmth and richness of color conveyed by Brahms affords a great sense of unity and fulfillment.
The first of the pair, the Quartet in C minor, Op. 51, No. 1, is a somber but passionate work. The Allegro first movement may be derived from one of the early discarded works, but it is in his familiar expressive language, speaking here of tense drama. The opening theme will be referred to in all the later movements except the Scherzo. In the second movement it is transformed into the principal subject of a calm Romance, Poco Adagio -a simple three-part song of great beauty in the distant key of A-flat. The third movement, Allegretto molto moderato e comodo, is in the traditional scherzo form, but with none of the original Italian meaning of the name which is "joke." It may be interpreted as a gracious dance or as an uneasy, sinister, shadowy one. The contrasting central trio section, Unpocopiu animato, is a folklike tune accompanied by unusual sounds from the open strings of the second violin and viola. In the Allegro finale, Brahms refers again to the Scherzo, but the musical materials are most closely related to those that open the Quartet, and the whole is presented with a concentrated force that recalls and balances the entire opening movement.
Quartet in F major, Op. 135 ........................Ludwig van Beethoven
(1770-1827)
This is Beethoven's last quartet, written when the composer was close to his death. It is the shortest and most concise of the late quartets; in form it returns to the "normal" four-movement scheme. The first movement is in sonata form with all themes given equal weight. The Vivace is a scherzo in form; in the trio, the first violin states the theme over a repeated accompaniment figure. The brief third movement is a theme with variations which belie their depth by surface simplicity.
Beethoven headed the manuscript of the final movement "The Difficult Decision." Under this he placed the three-note theme of the Grave introduction with the question "Must It Be" and followed this with the theme of the Allegro (an inversion of the Grave theme) and the answer "It Must Be." His intentions in doing this remain an enigma to this day. The movement is in sonata form, with the Grave theme returning in the development.
BOARD OF DIRECTORS
GAIL W. RECTOR, President WILBUR K. PIERPONT, Vice President
DOUGLAS D. CRARY, Secretary ALLEN P. BRITTON, Treasurer
PAUL W. McCRACKEN JOHN D. PAUL SARAH GODDARD POWER JOHN W. REED HAROLD T. SHAPIRO LOIS U. STEGEMAN E. THURSTON THIEME JERRY A. WEISBACH
UNIVERSITY MUSICAL SOCIETY
Burton Memorial Tower, Ann Arbor, Michigan 48109 Phones: (313) 665-3717764-2538