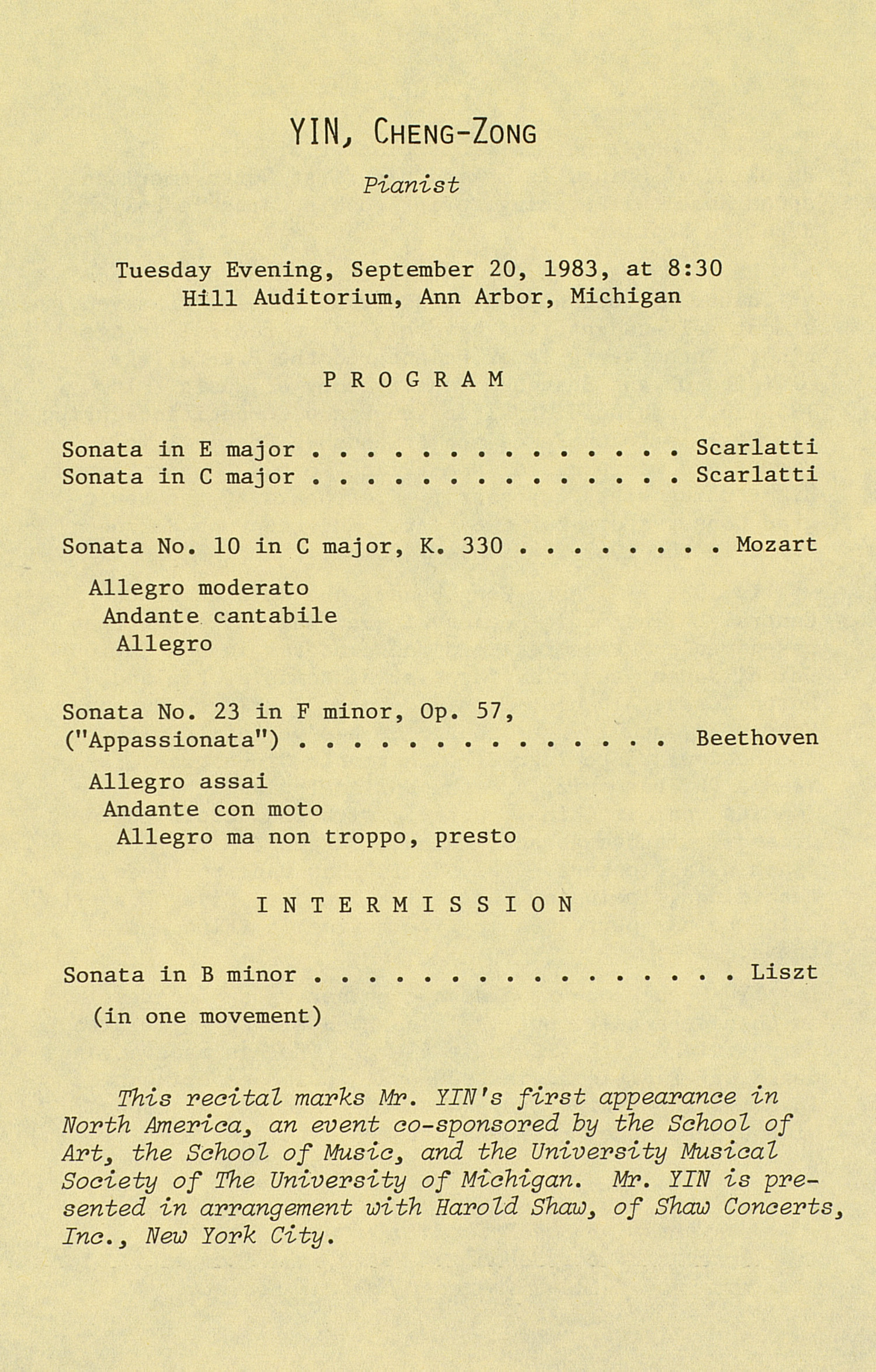 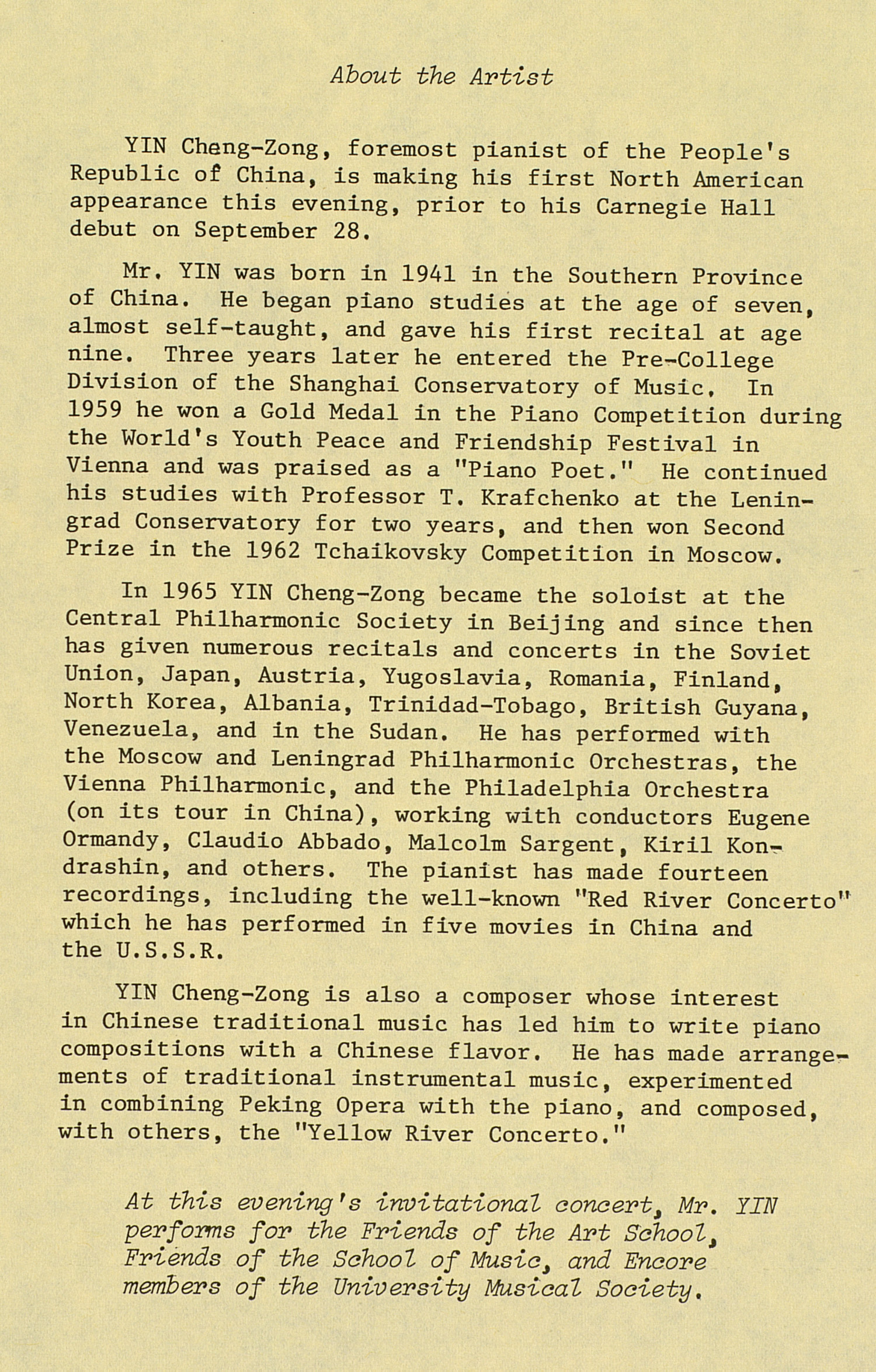 YIN,, ChengZong
Pianist
Tuesday Evening, September 20, 1983, at 8:30 Hill Auditorium, Ann Arbor, Michigan
PROGRAM
Sonata in E major .............. Scarlatti
Sonata in C major .............. Scarlatti
Sonata No. 10 in C major, K. 330........Mozart
Allegro moderato Andante cantabile Allegro
Sonata No. 23 in F minor, Op. 57,
("Appassionata") .............. Beethoven
Allegro assai Andante con moto Allegro ma non troppo, presto
INTERMISSION
Sonata in B minor................Liszt
(in one movement)
This reeital marks Mr. UN's first appearance in North America, an event cosponsored by the School of Arty the School of Music, and the University Musical Society of The University of Michigan. Mr. YIN is pre?sented in arrangement with Harold Shaw, of Shaw Concerts, Inc., New York City.
About the Artist
YIN ChengZong, foremost pianist of the People's Republic of China, is making his first North American appearance this evening, prior to his Carnegie Hall debut on September 28.
Mr. YIN was born in 1941 in the Southern Province of China. He began piano studies at the age of seven, almost selftaught, and gave his first recital at age nine. Three years later he entered the PreCollege Division of the Shanghai Conservatory of Music, In 1959 he won a Gold Medal in the Piano Competition during the World's Youth Peace and Friendship Festival in Vienna and was praised as a "Piano Poet." He continued his studies with Professor T. Krafchenko at the Lenin?grad Conservatory for two years, and then won Second Prize in the 1962 Tchaikovsky Competition in Moscow.
In 1965 YIN ChengZong became the soloist at the Central Philharmonic Society in Beijing and since then has given numerous recitals and concerts in the Soviet Union, Japan, Austria, Yugoslavia, Romania, Finland, North Korea, Albania, TrinidadTobago, British Guyana, Venezuela, and in the Sudan. He has performed with the Moscow and Leningrad Philharmonic Orchestras, the Vienna Philharmonic, and the Philadelphia Orchestra (on its tour in China), working with conductors Eugene Ormandy, Claudio Abbado, Malcolm Sargent, Kiril Kondrashin, and others. The pianist has made fourteen recordings, including the wellknown "Red River Concerto" which he has performed in five movies in China and the U.S.S.R.
YIN ChengZong is also a composer whose interest in Chinese traditional music has led him to write piano compositions with a Chinese flavor. He has made arrange?ments of traditional instrumental music, experimented in combining Peking Opera with the piano, and composed, with others, the "Yellow River Concerto."
At this evening's invitational concertt Mr. YIN performs for the Friends of the Art School Friends of the School of Musict and Encore members of the University Musical Society,