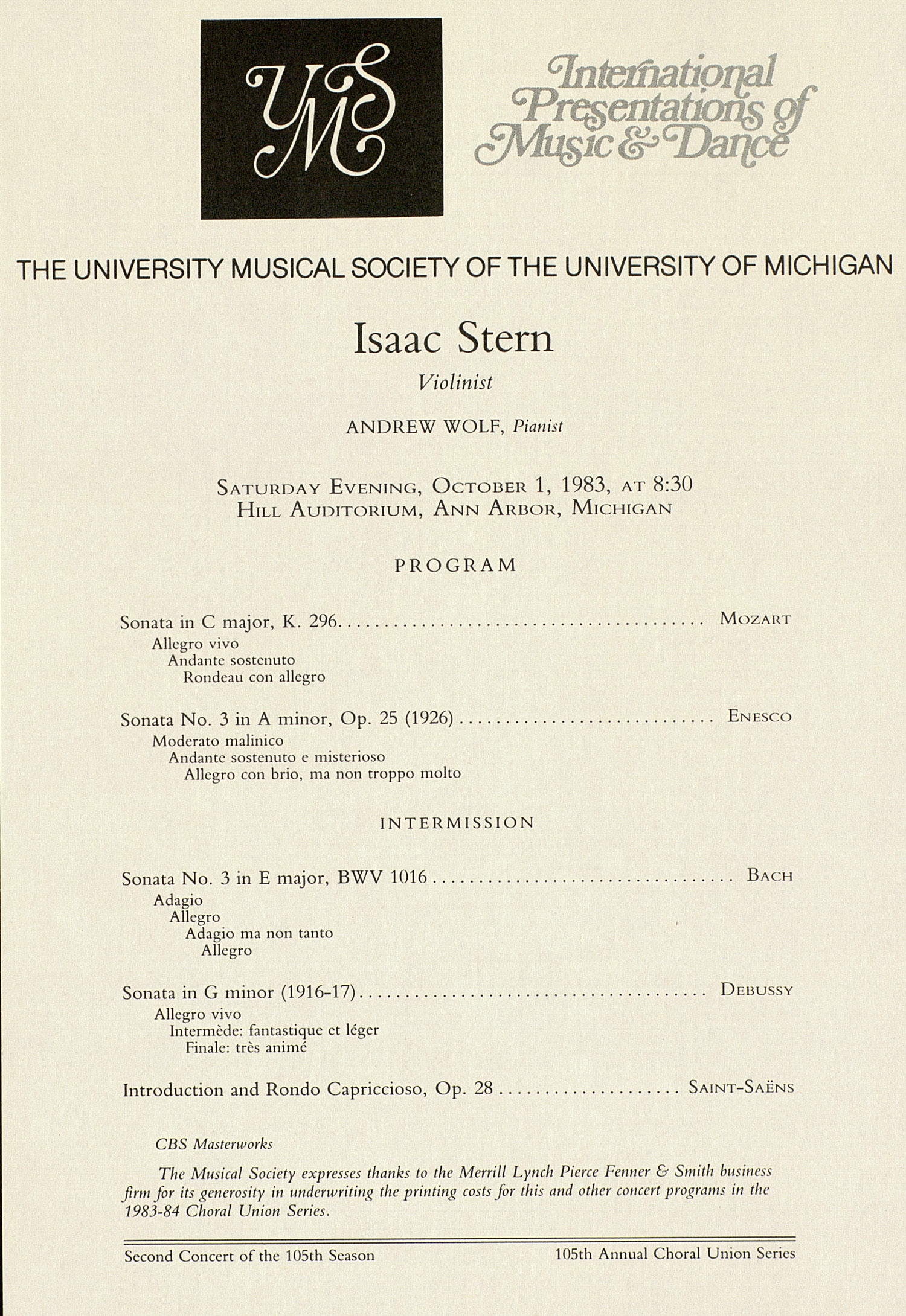 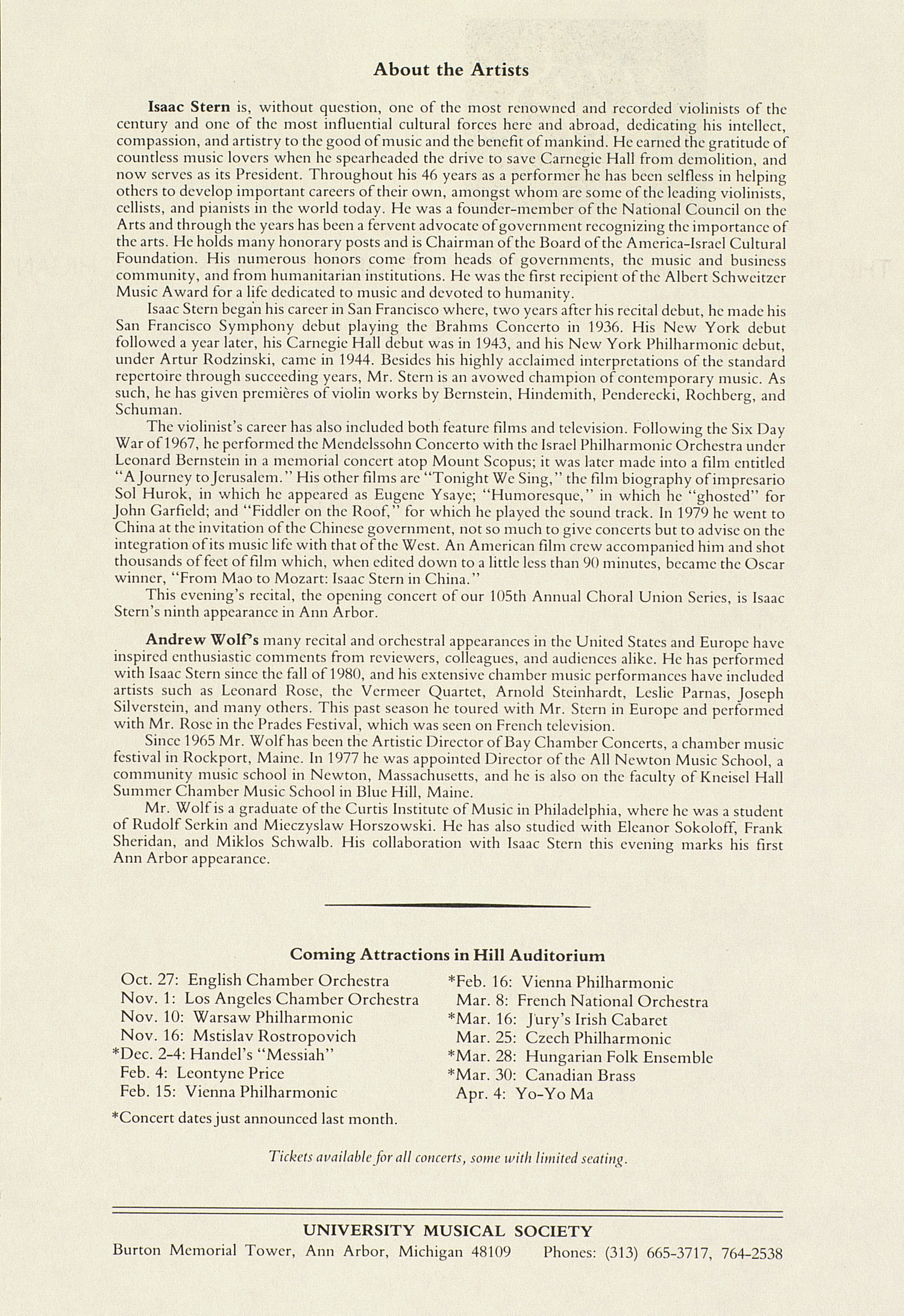 THE UNIVERSITY MUSICAL SOCIETY OF THE UNIVERSITY OF MICHIGAN
Isaac Stern
Violinist
ANDREW WOLF, Pianist
Saturday Evening, October 1, 1983, at 8:30 Hill Auditorium, Ann Arbor, Michigan
PROGRAM
Sonata in C major, K. 296........................................ Mozart
Allegro vivo
Andante sostenuto Rondeau con allegro
Sonata No. 3 in A minor, Op. 25 (1926)............................ Enesco
Moderato malinico
Andante sostenuto e misterioso
Allegro con brio, ma non troppo niolto
INTERMISSION
Sonata No. 3 in E major, BWV 1016................................. Bach
Adagio Allegro
Adagio ma non tanto Allegro
Sonata in G minor (1916-17)...................................... Deuussy
Allegro vivo
Intermede: fantastique et leger Finale: tres animc
Introduction and Rondo Capriccioso, Op. 28.................... Saint-Saens
CBS Masterworks
The Musical Society expresses thanks to the Merrill Lynch Pierce Fenner & Smith business firm for its generosity in underwriting the printing costs for this and other concert programs in the 1983-84 Choral Union Series.
Second Concert of the 105th Season 105th Annual Choral Union Series
About the Artists
Isaac Stern is, without question, one of the most renowned and recorded violinists of the century and one of the most influential cultural forces here and abroad, dedicating his intellect, compassion, and artistry to the good of music and the benefit of mankind. He earned the gratitude of countless music lovers when he spearheaded the drive to save Carnegie Hall from demolition, and now serves as its President. Throughout his 46 years as a performer he has been selfless in helping others to develop important careers of their own, amongst whom are some of the leading violinists, cellists, and pianists in the world today. He was a founder-member of the National Council on the Arts and through the years has been a fervent advocate of government recognizing the importance of the arts. He holds many honorary posts and is Chairman of the Hoard of the America-Israel Cultural Foundation. His numerous honors come from heads of governments, the music and business community, and from humanitarian institutions. He was the first recipient of the Albert Schweitzer Music Award for a life dedicated to music and devoted to humanity.
Isaac Stern began his career in San Francisco where, two years after his recital debut, he made his San Francisco Symphony debut playing the Brahms Concerto in 1936. His New York debut followed a year later, his Carnegie Hall debut was in 1943, and his New York Philharmonic debut, under Artur Rodzinski, came in 1944. Besides his highly acclaimed interpretations of the standard repertoire through succeeding years, Mr. Stern is an avowed champion of contemporary music. As such, he has given premieres of violin works by Bernstein, Hindemith, Penderecki, Rochbcrg, and Schuman.
The violinist's career has also included both feature films and television. Following the Six Day War of!967, he performed the Mendelssohn Concerto with the Israel Philharmonic Orchestra under Leonard Bernstein in a memorial concert atop Mount Scopus; it was later made into a film entitled "A Journey to Jerusalem." His other films arc "Tonight We Sing," the film biography of impresario Sol Hurok, in which he appeared as Eugene Ysaye; "Humoresque," in which he "ghosted" for John Garfield; and "Fiddler on the Roof," for which he played the sound track. In 1979 he went to China at the invitation of the Chinese government, not so much to give concerts but to advise on the integration of its music life with that of the West. An American film crew accompanied him and shot thousands of feet of film which, when edited down to a little less than 90 minutes, became the Oscar winner, "From Mao to Mozart: Isaac Stern in China."
This evening's recital, the opening concert of our 105th Annual Choral Union Series, is Isaac Stern's ninth appearance in Ann Arbor.
Andrew WolPs many recital and orchestral appearances in the United States and Europe have inspired enthusiastic comments from reviewers, colleagues, and audiences alike. He has performed with Isaac Stern since the fall of 1980, and his extensive chamber music performances have included artists such as Leonard Rose, the Vermeer Quartet, Arnold Steinhardt, Leslie Parnas, Joseph Silverstcin, and many others. This past season he toured with Mr. Stern in Europe and performed with Mr. Rose in the Prades Festival, which was seen on French television.
Since 1965 Mr. Wolf has been the Artistic Director of Bay Chamber Concerts, a chamber music festival in Rockport, Maine. In 1977 he was appointed Director of the All Newton Music School, a community music school in Newton, Massachusetts, and he is also on the faculty of Kneisel Hall Summer Chamber Music School in Blue Hill, Maine.
Mr. Wolf is a graduate of the Curtis Institute of Music in Philadelphia, where he was a student of Rudolf Serkin and Mieczyslaw Horszowski. He has also studied with Eleanor Sokoloff, Frank Sheridan, and Miklos Schwalb. His collaboration with Isaac Stern this evening marks his first Ann Arbor appearance.
Coming Attractions in Hill Auditorium
Oct. 27: English Chamber Orchestra Fcb. 16: Vienna Philharmonic Nov. 1: Los Angeles Chamber Orchestra Mar. 8: French National Orchestra
Nov. 10: Warsaw Philharmonic Mar. 16: Jury's Irish Cabaret Nov. 16: Mstislav Rostropovich Mar. 25: Czech Philharmonic
Dcc. 2-4: Handel's "Messiah" Mar. 28: Hungarian Folk Ensemble
Feb. 4: Leontync Price Mar. 30: Canadian Brass Feb. 15: Vienna Philharmonic Apr. 4: Yo-Yo Ma
"Concert dates just announced last month.
Tickets available for all concerts, some with limited seating.
UNIVERSITY MUSICAL SOCIETY
Burton Memorial Tower, Ann Arbor, Michigan 48109 Phones: (313) 665-3717, 764-2538