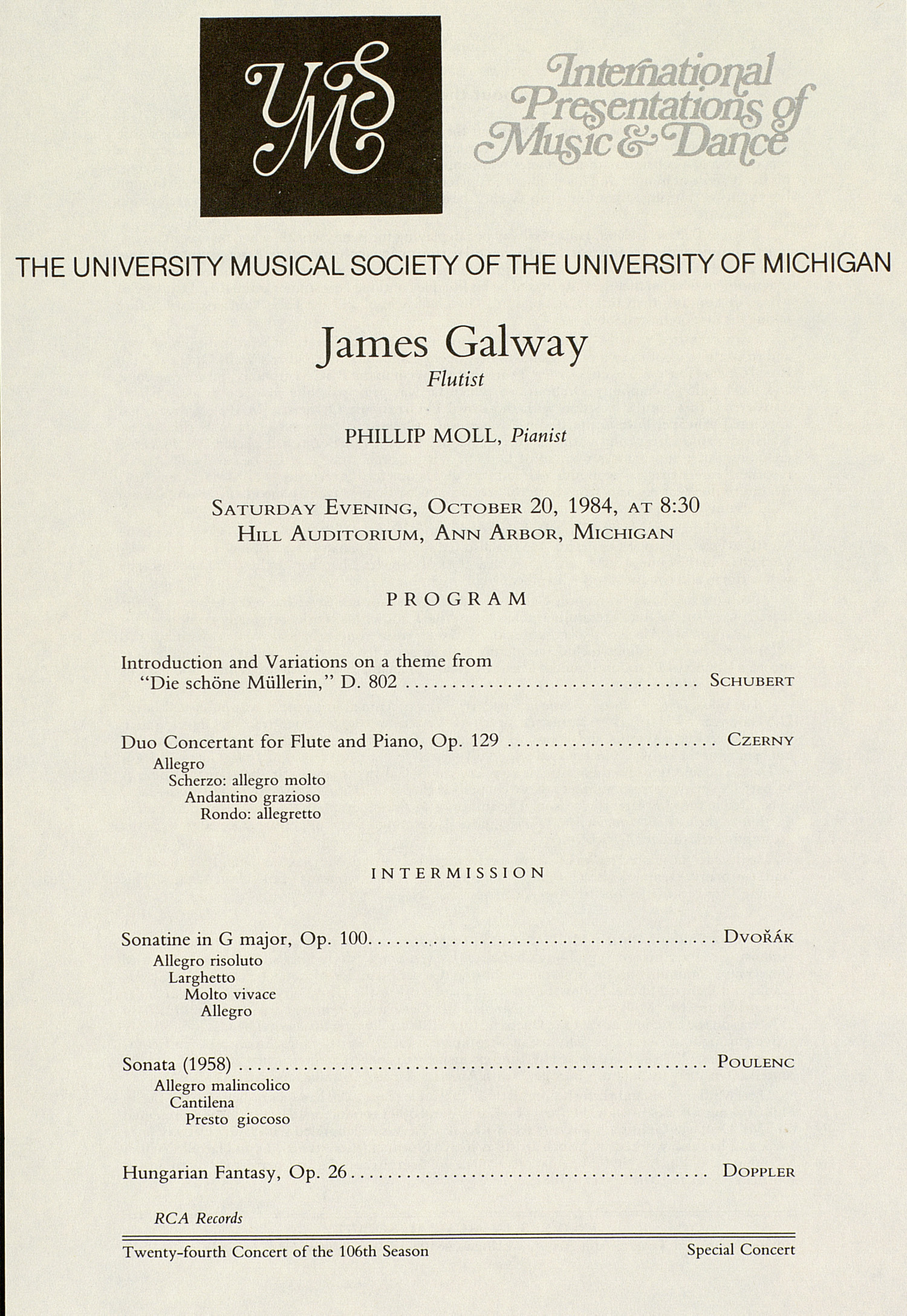 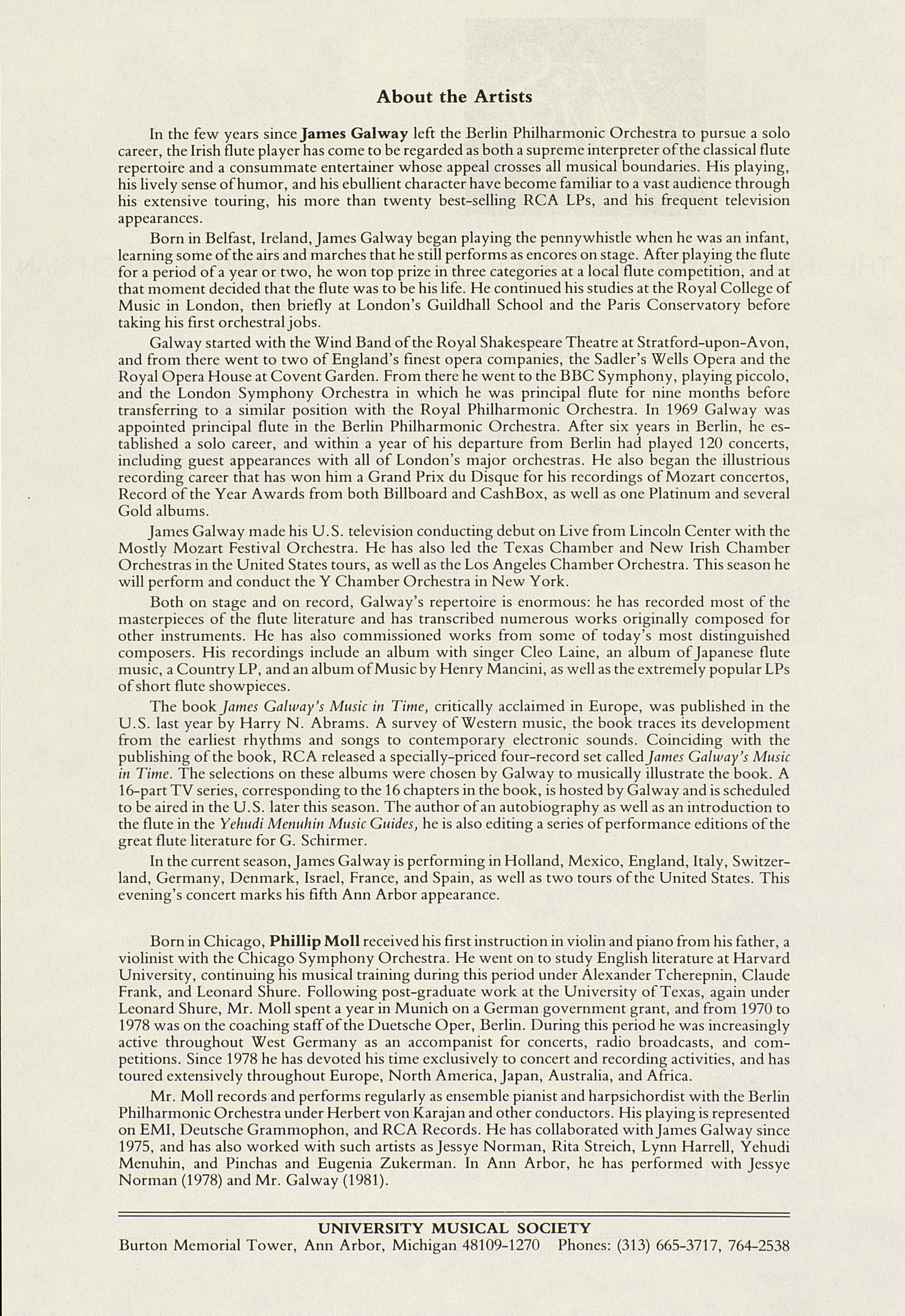 THE UNIVERSITY MUSICAL SOCIETY OF THE UNIVERSITY OF MICHIGAN
James Galway
Flutist PHILLIP MOLL, Pianist
Saturday Evening, October 20, 1984, at 8:30 Hill Auditorium, Ann Arbor, Michigan
PROGRAM
Introduction and Variations on a theme from
"Die schone Mullerin," D. 802................................ Schubert
Duo Concertant for Flute and Piano, Op. 129....................... Czerny
Allegro
Scherzo: allegro molto Andantino grazioso Rondo: allegretto
INTERMISSION
Sonatine in G major, Op. 100......................................Dvorak
Allegro risoluto Larghctto Molto vivace Allegro
Sonata (1958)................................................... Poulenc
Allegro malincolico Cantilena
Presto giocoso
Hungarian Fantasy, Op. 26....................................... Dofpler
RCA Records Twenty-fourth Concert of the 106th Season Special Concert
About the Artists
In the few years since James Gal way left the Berlin Philharmonic Orchestra to pursue a solo career, the Irish flute player has come to be regarded as both a supreme interpreter of the classical flute repertoire and a consummate entertainer whose appeal crosses all musical boundaries. His playing, his lively sense of humor, and his ebullient character have become familiar to a vast audience through his extensive touring, his more than twenty best-selling RCA LPs, and his frequent television appearances.
Born in Belfast, Ireland, James Galway began playing the pcnnywhistle when he was an infant, learning some of the airs and marches that he still performs as encores on stage. After playing the flute for a period of a year or two, he won top prize in three categories at a local flute competition, and at that moment decided that the flute was to be his life. He continued his studies at the Royal College of Music in London, then briefly at London's Guildhall School and the Paris Conservatory before taking his first orchestral jobs.
Galway started with the Wind Band of the Royal Shakespeare Theatre at Stratford-upon-A von, and from there went to two of England's finest opera companies, the Sadler's Wells Opera and the Royal Opera House at Covcnt Garden. From there he went to the BBC Symphony, playing piccolo, and the London Symphony Orchestra in which he was principal flute for nine months before transferring to a similar position with the Royal Philharmonic Orchestra. In 1969 Galway was appointed principal flute in the Berlin Philharmonic Orchestra. After six years in Berlin, he es?tablished a solo career, and within a year of his departure from Berlin had played 120 concerts, including guest appearances with all of London's major orchestras. He also began the illustrious recording career that has won him a Grand Prix du Disque for his recordings of Mozart concertos, Record of the Year Awards from both Billboard and CashBox, as well as one Platinum and several Gold albums.
James Galway made his U.S. television conducting debut on Live from Lincoln Center with the Mostly Mozart Festival Orchestra. He has also led the Texas Chamber and New Irish Chamber Orchestras in the United States tours, as well as the Los Angeles Chamber Orchestra. This season he will perform and conduct the Y Chamber Orchestra in New York.
Both on stage and on record, Galway's repertoire is enormous: he has recorded most of the masterpieces of the flute literature and has transcribed numerous works originally composed for other instruments. He has also commissioned works from some of today's most distinguished composers. His recordings include an album with singer Cleo Lainc, an album of Japanese flute music, a Country LP, and an album of Music by Henry Mancini, as well as the extremely popular LPs of short flute showpieces.
The book James Galway's Music in Time, critically acclaimed in Europe, was published in the U.S. last year by Harry N. Abrams. A survey of Western music, the book traces its development from the earliest rhythms and songs to contemporary electronic sounds. Coinciding with the publishing of the book, RCA released a specially-priced four-record set called James Galway's Music in Time. The selections on these albums were chosen by Galway to musically illustrate the book. A 16-part TV scries, corresponding to the 16 chapters in the book, is hosted by Galway and is scheduled to be aired in the U.S. later this season. The author of an autobiography as well as an introduction to the flute in the Yehudi Menuhin Music Guides, he is also editing a series of performance editions of the great flute literature for G. Schirmcr.
In the current season, James Galway is performing in Holland, Mexico, England, Italy, Switzer?land, Germany, Denmark, Israel, France, and Spain, as well as two tours of the United States. This evening's concert marks his fifth Ann Arbor appearance.
Born in Chicago, Phillip Moll received his first instruction in violin and piano from his father, a violinist with the Chicago Symphony Orchestra. He went on to study English literature at Harvard University, continuing his musical training during this period under Alexander Tcherepnin, Claude Frank, and Leonard Shurc. Following post-graduate work at the University of Texas, again under Leonard Shure, Mr. Moll spent a year in Munich on a German government grant, and from 1970 to 1978 was on the coaching staff of the Duetsche Opcr, Berlin. During this period he was increasingly active throughout West Germany as an accompanist for concerts, radio broadcasts, and com?petitions. Since 1978 he has devoted his time exclusively to concert and recording activities, and has toured extensively throughout Europe, North America, Japan, Australia, and Africa.
Mr. Moll records and performs regularly as ensemble pianist and harpsichordist with the Berlin Philharmonic Orchestra under Herbert von Karajan and other conductors. His playing is represented on EMI, Deutsche Grammophon, and RCA Records. He has collaborated with James Galway since 1975, and has also worked with such artists as Jessye Norman, Rita Streich, Lynn Harrell, Yehudi Menuhin, and Pinchas and Eugenia Zukcrman. In Ann Arbor, he has performed with Jcssyc Norman (1978) and Mr. Galway (1981).
UNIVERSITY MUSICAL SOCIETY
Burton Memorial Tower, Ann Arbor, Michigan 48109-1270 Phones: (313) 665-3717, 764-2538