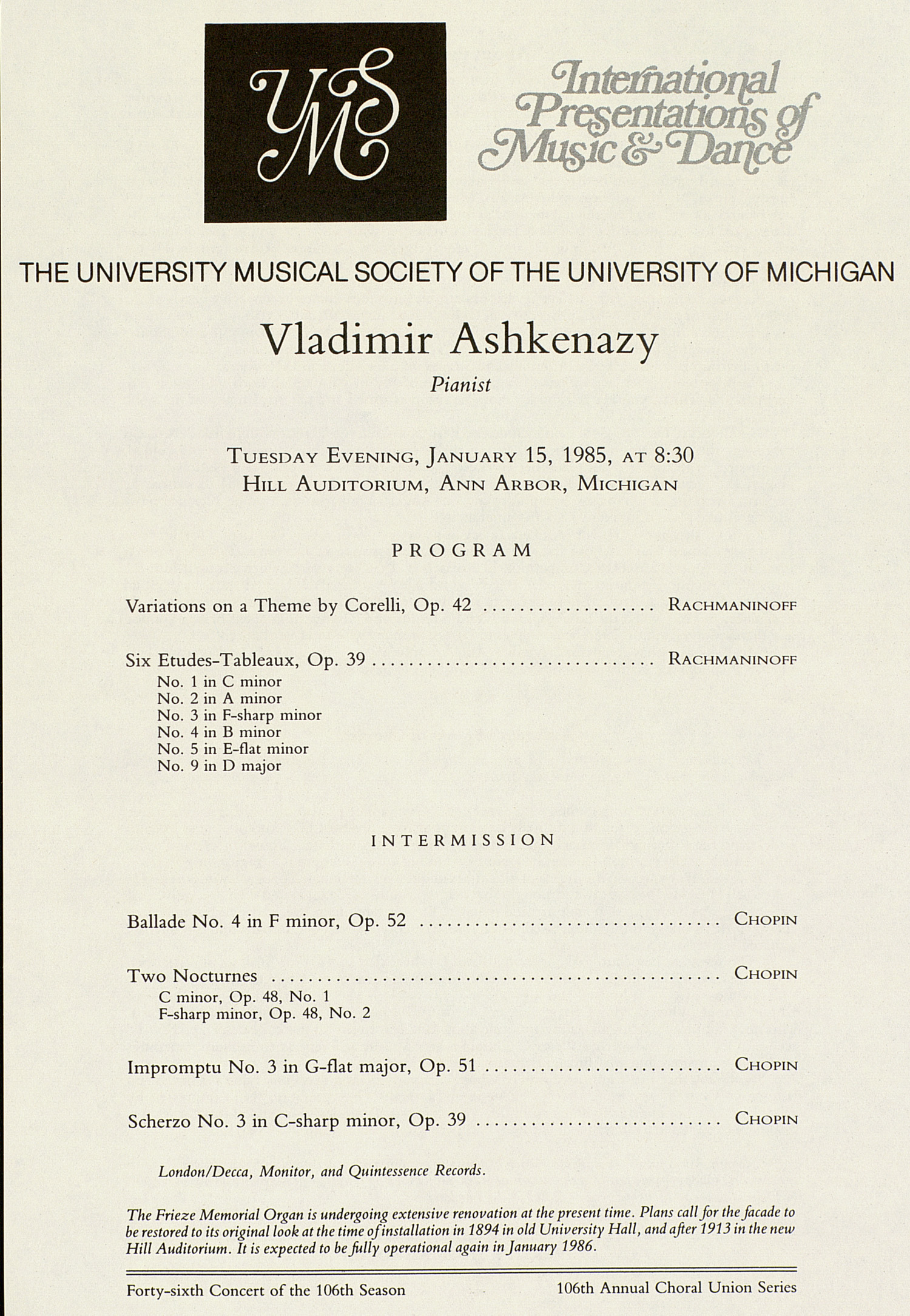 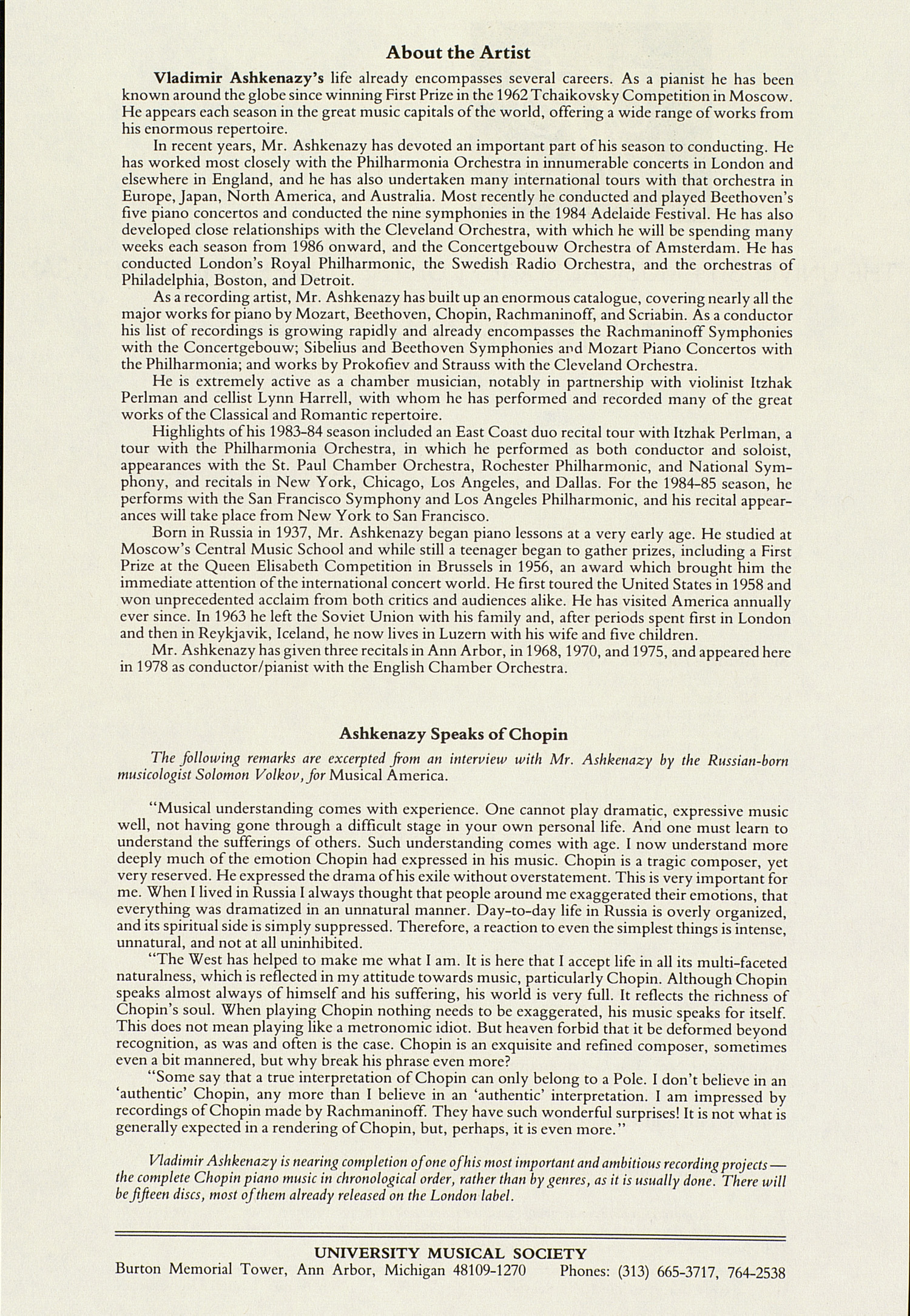 106th
About the Artist
Vladimir Ashkenazy's life already encompasses several careers. As a pianist he has been known around the globe since winning First Prize in the 1962 Tchaikovsky Competition in Moscow. He appears each season in the great music capitals of the world, offering a wide range of works from his enormous repertoire.
In recent years, Mr. Ashkenazy has devoted an important part of his season to conducting. He has worked most closely with the Philharmonia Orchestra in innumerable concerts in London and elsewhere in England, and he has also undertaken many international tours with that orchestra in Europe, Japan, North America, and Australia. Most recently he conducted and played Beethoven's five piano concertos and conducted the nine symphonies in the 1984 Adelaide Festival. He has also developed close relationships with the Cleveland Orchestra, with which he will be spending many weeks each season from 1986 onward, and the Conccrtgebouw Orchestra of Amsterdam. He has conducted London's Royal Philharmonic, the Swedish Radio Orchestra, and the orchestras of Philadelphia, Boston, and Detroit.
As a recording artist, Mr. Ashkenazy has built up an enormous catalogue, covering nearly all the major works for piano by Mozart, Beethoven, Chopin, Rachmaninoff, and Scriabin. As a conductor his list of recordings is growing rapidly and already encompasses the Rachmaninoff Symphonies with the Concertgebouw; Sibelius and Beethoven Symphonies and Mozart Piano Concertos with the Philharmonia; and works by Prokofiev and Strauss with the Cleveland Orchestra.
He is extremely active as a chamber musician, notably in partnership with violinist Itzhak Perlman and cellist Lynn Harrell, with whom he has performed and recorded many of the great works of the Classical and Romantic repertoire.
Highlights of his 198384 season included an East Coast duo recital tour with Itzhak Perlman, a tour with the Philharmonia Orchestra, in which he performed as both conductor and soloist, appearances with the St. Paul Chamber Orchestra, Rochester Philharmonic, and National Sym?phony, and recitals in New York, Chicago, Los Angeles, and Dallas. For the 198485 season, he performs with the San Francisco Symphony and Los Angeles Philharmonic, and his recital appear?ances will take place from New York to San Francisco.
Born in Russia in 1937, Mr. Ashkenazy began piano lessons at a very early age. He studied at Moscow's Central Music School and while still a teenager began to gather prizes, including a First Prize at the Queen Elisabeth Competition in Brussels in 1956, an award which brought him the immediate attention of the international concert world. He first toured the United States in 1958 and won unprecedented acclaim from both critics and audiences alike. He has visited America annually ever since. In 1963 he left the Soviet Union with his family and, after periods spent first in London and then in Reykjavik, Iceland, he now lives in Luzern with his wife and five children.
Mr. Ashkenazy has given three recitals in Ann Arbor, in 1968, 1970, and 1975, and appeared here in 1978 as conductorpianist with the English Chamber Orchestra.
Ashkenazy Speaks of Chopin
The following remarks are excerpted from an interview with Mr. Ashkenazy by the Russianborn musicologist Solomon Volkov.for Musical America.
"Musical understanding comes with experience. One cannot play dramatic, expressive music well, not having gone through a difficult stage in your own personal life. And one must learn to understand the sufferings of others. Such understanding comes with age. I now understand more deeply much of the emotion Chopin had expressed in his music. Chopin is a tragic composer, yet very reserved. He expressed the drama of his exile without overstatement. This is very important for me. When I lived in Russia I always thought that people around me exaggerated their emotions, that everything was dramatized in an unnatural manner. Daytoday life in Russia is overly organized, and its spiritual side is simply suppressed. Therefore, a reaction to even the simplest things is intense, unnatural, and not at all uninhibited.
"The West has helped to make me what I am. It is here that I accept life in all its multifaceted naturalness, which is reflected in my attitude towards music, particularly Chopin. Although Chopin speaks almost always of himself and his suffering, his world is very full. It reflects the richness of Chopin's soul. When playing Chopin nothing needs to be exaggerated, his music speaks for itself. This does not mean playing like a metronomic idiot. But heaven forbid that it be deformed beyond recognition, as was and often is the case. Chopin is an exquisite and refined composer, sometimes even a bit mannered, but why break his phrase even more
"Some say that a true interpretation of Chopin can only belong to a Pole. I don't believe in an 'authentic' Chopin, any more than I believe in an 'authentic' interpretation. I am impressed by recordings of Chopin made by Rachmaninoff. They have such wonderful surprises! It is not what is generally expected in a rendering of Chopin, but, perhaps, it is even more."
Vladimir Ashkenazy is nearing completion of one of his most important and ambitious recording projects -the complete Chopin piano music in chronological order, rather than by genres, as it is usually done. There will be fifteen discs, most of them already released on the London label.
UNIVERSITY MUSICAL SOCIETY
Burton Memorial Tower, Ann Arbor, Michigan 481091270 Phones: (313) 6653717, 7642538