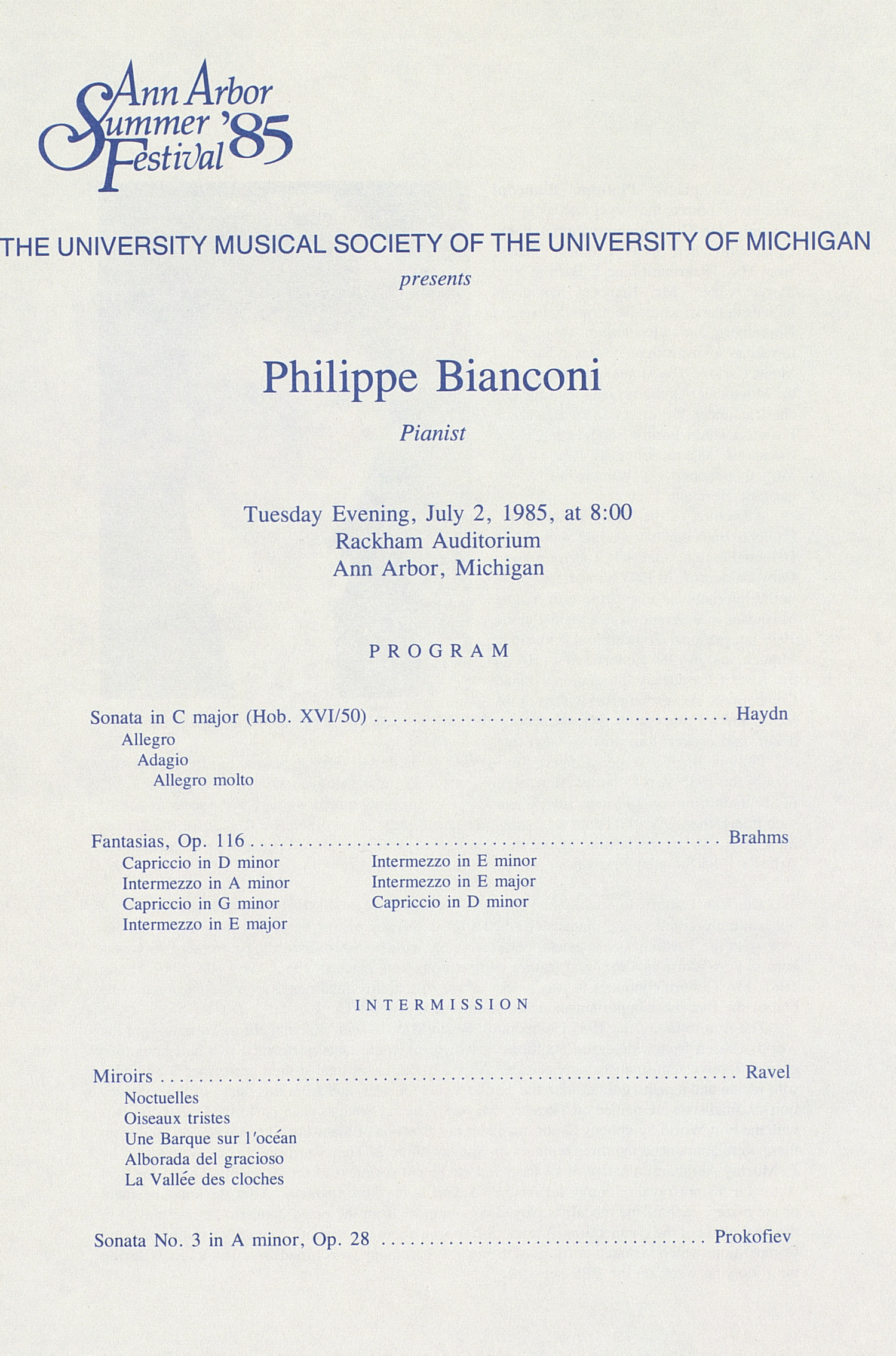 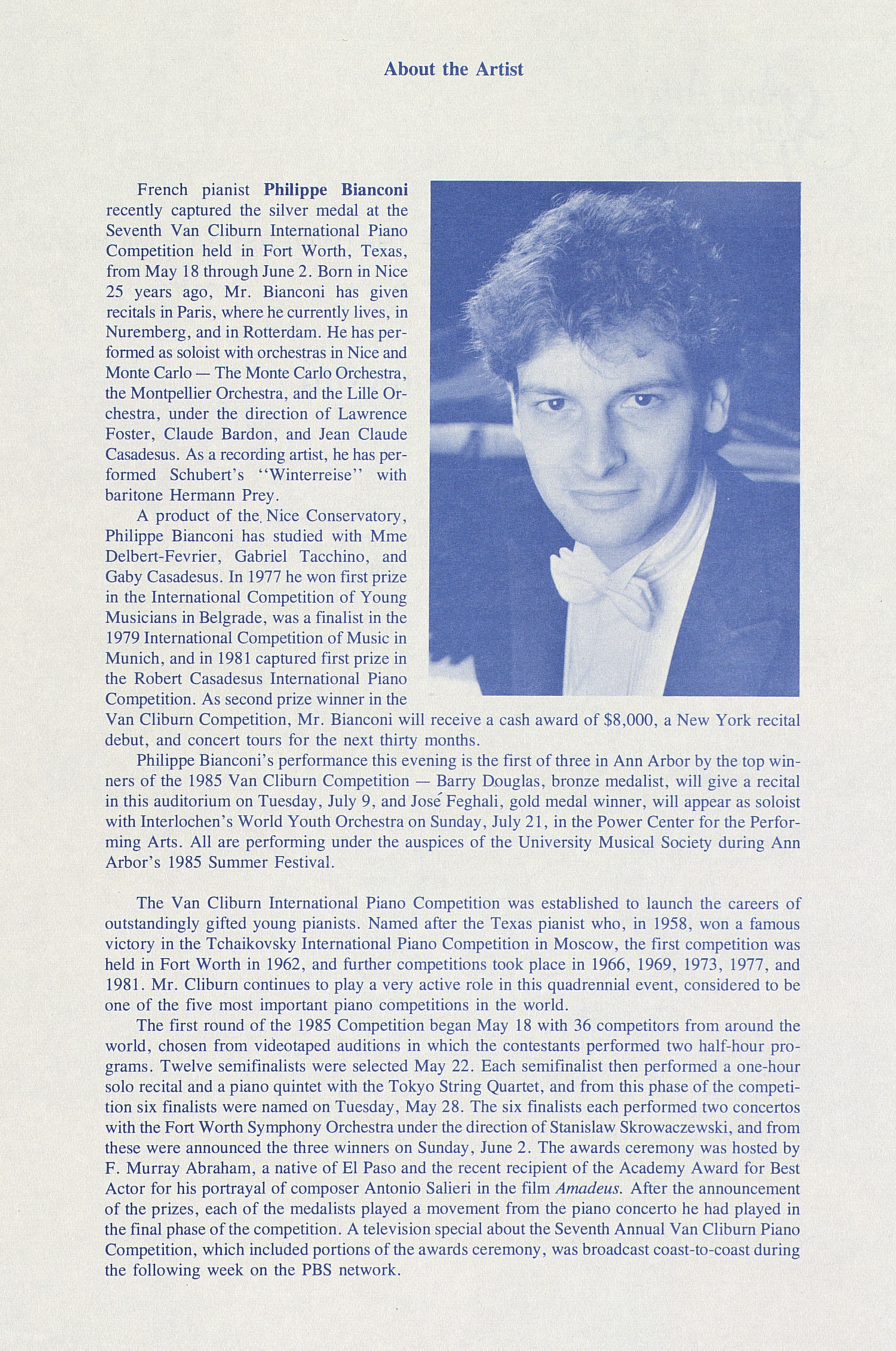 Arbor
inn immer '
htvOal
THE UNIVERSITY MUSICAL SOCIETY OF THE UNIVERSITY OF MICHIGAN
presents
Philippe Bianconi
Pianist
Tuesday Evening, July 2, 1985, at 8:00 Rackham Auditorium Ann Arbor, Michigan
PROGRAM
Sonata in C major (Hob. XVI50).....................................Haydn
Allegro Adagio Allegro molto
Fantasias, Op. 116.................................................Brahms
Capriccio in D minor Intermezzo in E minor
Intermezzo in A minor Intermezzo in E major
Capriccio in G minor Capriccio in D minor
Intermezzo in E major
INTERMISSION
Miroirs............................................................Ravel
Noctuelles
Oiseaux tristes
Une Barque sur 1 'oce'an
Alborada del gracioso
La Vallee des cloches
Sonata No. 3 in A minor, Op. 28 ..................................Prokofiev
About the Artist
French pianist Philippe Bianconi
recently captured the silver medal at the Seventh Van Cliburn International Piano Competition held in Fort Worth, Texas, from May 18 through June 2. Born in Nice 25 years ago, Mr. Bianconi has given recitals in Paris, where he currently lives, in Nuremberg, and in Rotterdam. He has per?formed as soloist with orchestras in Nice and Monte Carlo -The Monte Carlo Orchestra, the Montpellier Orchestra, and the Lille Or?chestra, under the direction of Lawrence Foster, Claude Bardon, and Jean Claude Casadesus. As a recording artist, he has per?formed Schubert's "Winterreise" with baritone Hermann Prey.
A product of the. Nice Conservatory, Philippe Bianconi has studied with Mme DelbertFevrier, Gabriel Tacchino, and Gaby Casadesus. In 1977 he won first prize in the International Competition of Young Musicians in Belgrade, was a finalist in the 1979 International Competition of Music in Munich, and in 1981 captured first prize in the Robert Casadesus International Piano Competition. As second prize winner in the
Van Cliburn Competition, Mr. Bianconi will receive a cash award of $8,000, a New York recital debut, and concert tours for the next thirty months.
Philippe Bianconi's performance this evening is the first of three in Ann Arbor by the top win?ners of the 1985 Van Cliburn Competition -Barry Douglas, bronze medalist, will give a recital in this auditorium on Tuesday, July 9, and Jose Feghali, gold medal winner, will appear as soloist with Interlochen's World Youth Orchestra on Sunday, July 21, in the Power Center for the Perfor?ming Arts. All are performing under the auspices of the University Musical Society during Ann Arbor's 1985 Summer Festival.
The Van Cliburn International Piano Competition was established to launch the careers of outstandingly gifted young pianists. Named after the Texas pianist who, in 1958, won a famous victory in the Tchaikovsky International Piano Competition in Moscow, the first competition was held in Fort Worth in 1962, and further competitions took place in 1966, 1969, 1973, 1977, and 1981. Mr. Cliburn continues to play a very active role in this quadrennial event, considered to be one of the five most important piano competitions in the world.
The first round of the 1985 Competition began May 18 with 36 competitors from around the world, chosen from videotaped auditions in which the contestants performed two halfhour pro?grams. Twelve semifinalists were selected May 22. Each semifinalist then performed a onehour solo recital and a piano quintet with the Tokyo String Quartet, and from this phase of the competi?tion six finalists were named on Tuesday, May 28. The six finalists each performed two concertos with the Fort Worth Symphony Orchestra under the direction of Stanislaw Skrowaczewski, and from these were announced the three winners on Sunday. June 2. The awards ceremony was hosted by F. Murray Abraham, a native of El Paso and the recent recipient of the Academy Award for Best Actor for his portrayal of composer Antonio Salieri in the film Amadeus. After the announcement of the prizes, each of the medalists played a movement from the piano concerto he had played in the final phase of the competition. A television special about the Seventh Annual Van Cliburn Piano Competition, which included portions of the awards ceremony, was broadcast coasttocoast during the following week on the PBS network.