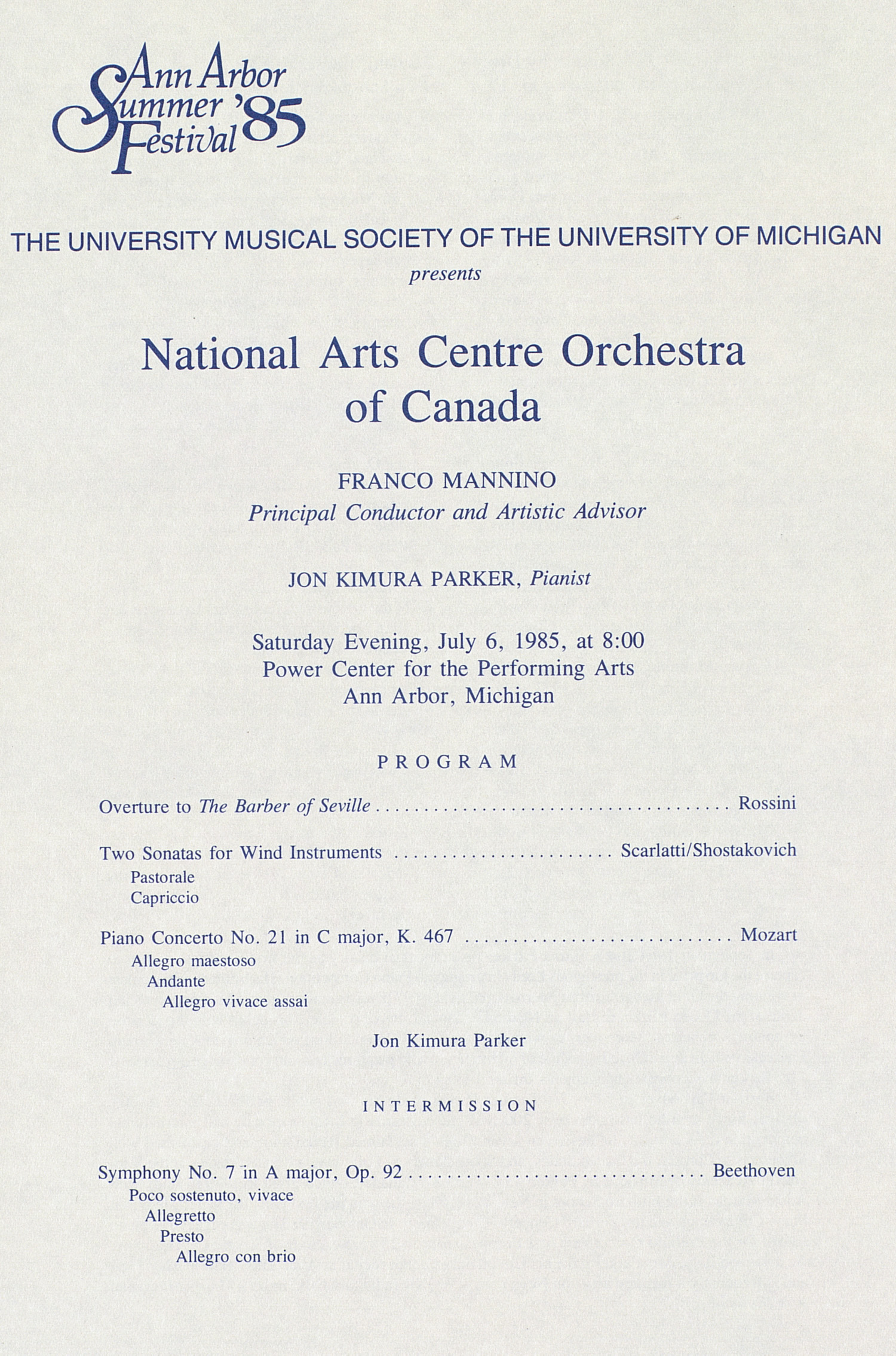 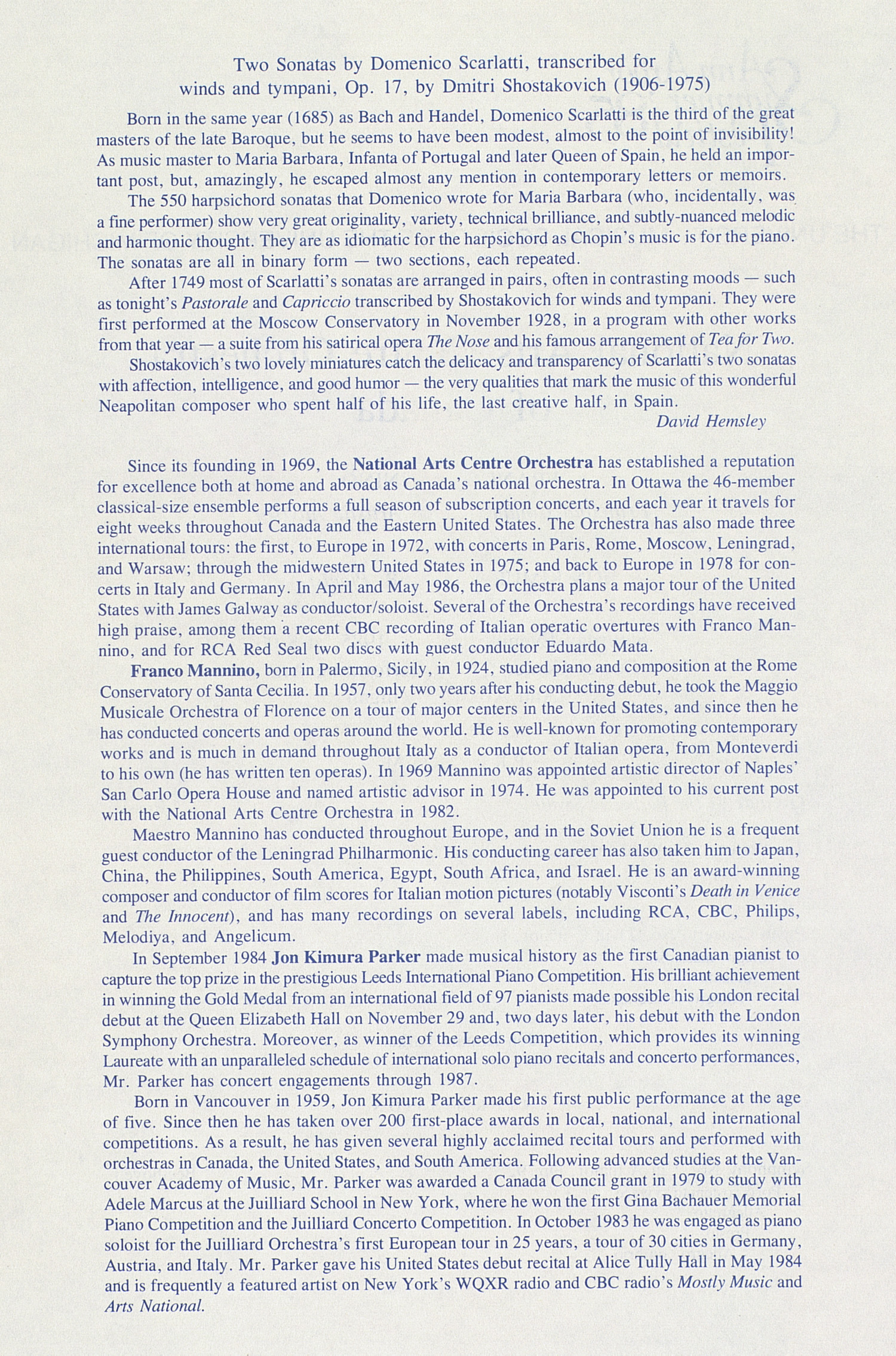 nn
Arbor
THE UNIVERSITY MUSICAL SOCIETY OF THE UNIVERSITY OF MICHIGAN
presents
National Arts Centre Orchestra of Canada
FRANCO MANNINO Principal Conductor and Artistic Advisor
JON KIMURA PARKER, Pianist
Saturday Evening, July 6, 1985, at 8:00
Power Center for the Performing Arts
Ann Arbor, Michigan
PROGRAM Overture to The Barber of Seville.....................................Rossini
Two Sonatas for Wind Instruments .......................ScarlattiShostakovich
Pastorale Caprice io
Piano Concerto No. 21 in C major, K. 467 ............................Mozart
Allegro maestoso Andante Allegro vivace assai
Jon Kimura Parker INTERMISSION
Symphony No. 7 in A major, Op. 92...............................Beethoven
Poco sostenuto, vivace Allegretto Presto Allegro con brio
Two Sonatas by Domenico Scarlatti, transcribed for winds and tympani. Op. 17, by Dmitri Shostakovich (19061975)
Born in the same year (1685) as Bach and Handel, Domenico Scarlatti is the third of the great masters of the late Baroque, but he seems to have been modest, almost to the point of invisibility! As music master to Maria Barbara, Infanta of Portugal and later Queen of Spain, he held an impor?tant post, but, amazingly, he escaped almost any mention in contemporary letters or memoirs.
The 550 harpsichord sonatas that Domenico wrote for Maria Barbara (who, incidentally, was a fine performer) show very great originality, variety, technical brilliance, and subtlynuanced melodic and harmonic thought. They are as idiomatic for the harpsichord as Chopin's music is for the piano. The sonatas are all in binary form -two sections, each repeated.
After 1749 most of Scarlatti's sonatas are arranged in pairs, often in contrasting moods -such as tonight's Pastorale and Capriccio transcribed by Shostakovich for winds and tympani. They were first performed at the Moscow Conservatory in November 1928, in a program with other works from that year -a suite from his satirical opera Tlw Nose and his famous arrangement of Tea for Two.
Shostakovich's two lovely miniatures catch the delicacy and transparency of Scarlatti's two sonatas with affection, intelligence, and good humor -the very qualities that mark the music of this wonderful Neapolitan composer who spent half of his life, the last creative half, in Spain.
David Hemsley
Since its founding in 1969. the National Arts Centre Orchestra has established a reputation for excellence both at home and abroad as Canada's national orchestra. In Ottawa the 46member classicalsize ensemble performs a full season of subscription concerts, and each year it travels for eight weeks throughout Canada and the Eastern United States. The Orchestra has also made three international tours: the first, to Europe in 1972, with concerts in Paris. Rome, Moscow, Leningrad, and Warsaw: through the midwestern United States in 1975; and back to Europe in 1978 for con?certs in Italy and Germany. In April and May 1986, the Orchestra plans a major tour of the United States with James Galway as conductorsoloist. Several of the Orchestra's recordings have received high praise, among them a recent CBC recording of Italian operatic overtures with Franco Mannino, and for RCA Red Seal two discs with guest conductor Eduardo Mata.
Franco Mannino, born in Palermo, Sicily, in 1924. studied piano and composition at the Rome Conservatory of Santa Cecilia. In 1957. only two years after his conducting debut, he took the Maggio Musicale Orchestra of Florence on a tour of major centers in the United States, and since then he has conducted concerts and operas around the world. He is wellknown for promoting contemporary works and is much in demand throughout Italy as a conductor of Italian opera, from Monteverdi to his own (he has written ten operas). In 1969 Mannino was appointed artistic director of Naples' San Carlo Opera House and named artistic advisor in 1974. He was appointed to his current post with the National Arts Centre Orchestra in 1982.
Maestro Mannino has conducted throughout Europe, and in the Soviet Union he is a frequent guest conductor of the Leningrad Philharmonic. His conducting career has also taken him to Japan, China, the Philippines, South America, Egypt, South Africa, and Israel. He is an awardwinning composer and conductor of film scores for Italian motion pictures (notably Visconti's Death in Venice and Tfie Innocent), and has many recordings on several labels, including RCA. CBC, Philips. Melodiya, and Angelicum.
In September 1984 Jon Kimura Parker made musical history as the first Canadian pianist to capture the top prize in the prestigious Leeds International Piano Competition. His brilliant achievement in winning the Gold Medal from an international field of 97 pianists made possible his London recital debut at the Queen Elizabeth Hall on November 29 and, two days later, his debut with the London Symphony Orchestra. Moreover, as winner of the Leeds Competition, which provides its winning Laureate with an unparalleled schedule of international solo piano recitals and concerto performances, Mr. Parker has concert engagements through 1987.
Born in Vancouver in 1959, Jon Kimura Parker made his first public performance at the age of five. Since then he has taken over 200 firstplace awards in local, national, and international competitions. As a result, he has given several highly acclaimed recital tours and performed with orchestras in Canada, the United States, and South America. Following advanced studies at the Van?couver Academy of Music, Mr. Parker was awarded a Canada Council grant in 1979 to study with Adele Marcus at the Juilliard School in New York, where he won the first Gina Bachauer Memorial Piano Competition and the Juilliard Concerto Competition. In October 1983 he was engaged as piano soloist for the Juilliard Orchestra's first European tour in 25 years, a tour of 30 cities in Germany. Austria, and Italy. Mr. Parker gave his United States debut recital at Alice Tully Hall in May 1984 and is frequently a featured artist on New York's WQXR radio and CBC radio's Mostly Music and Arts National.