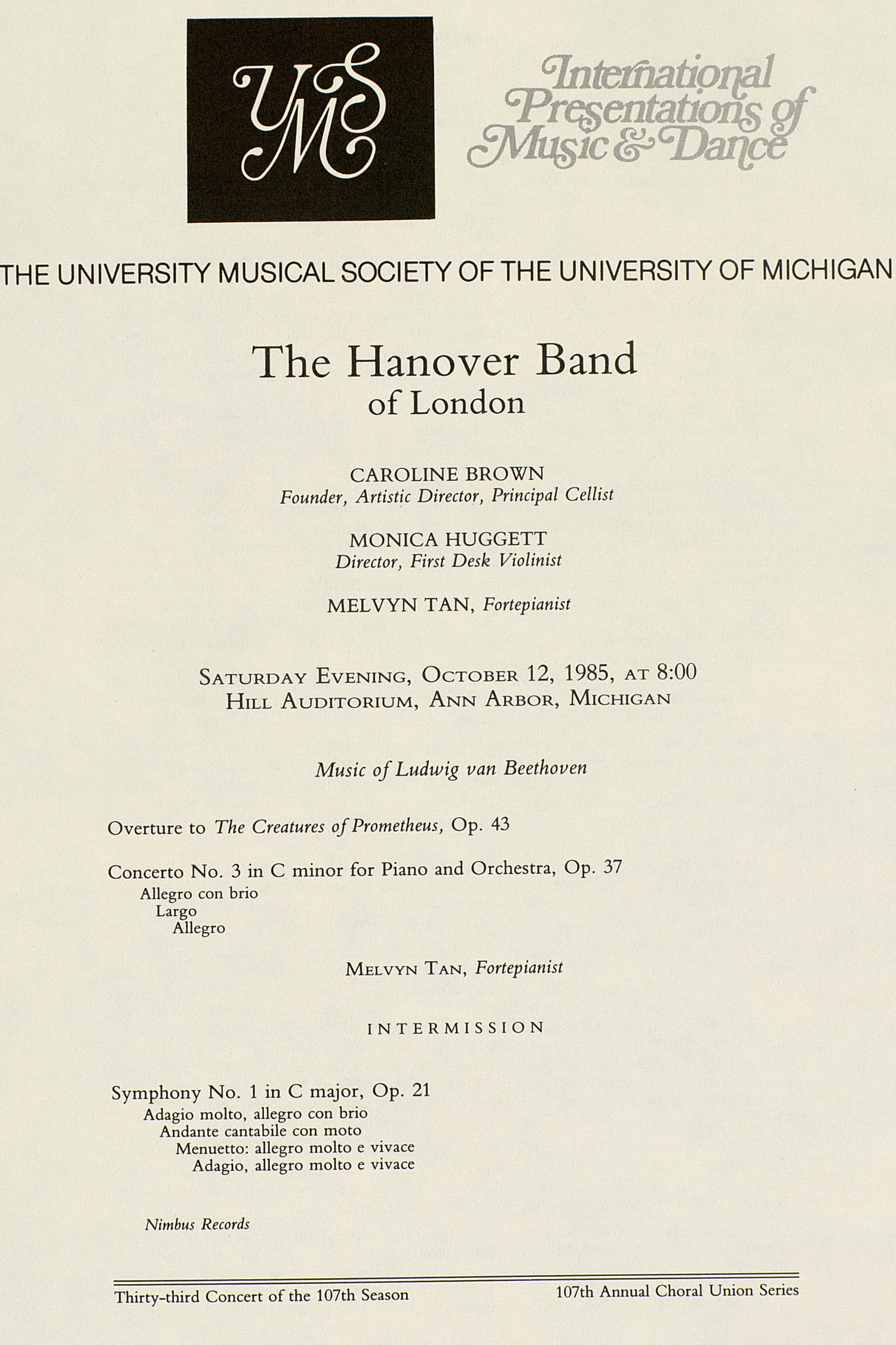 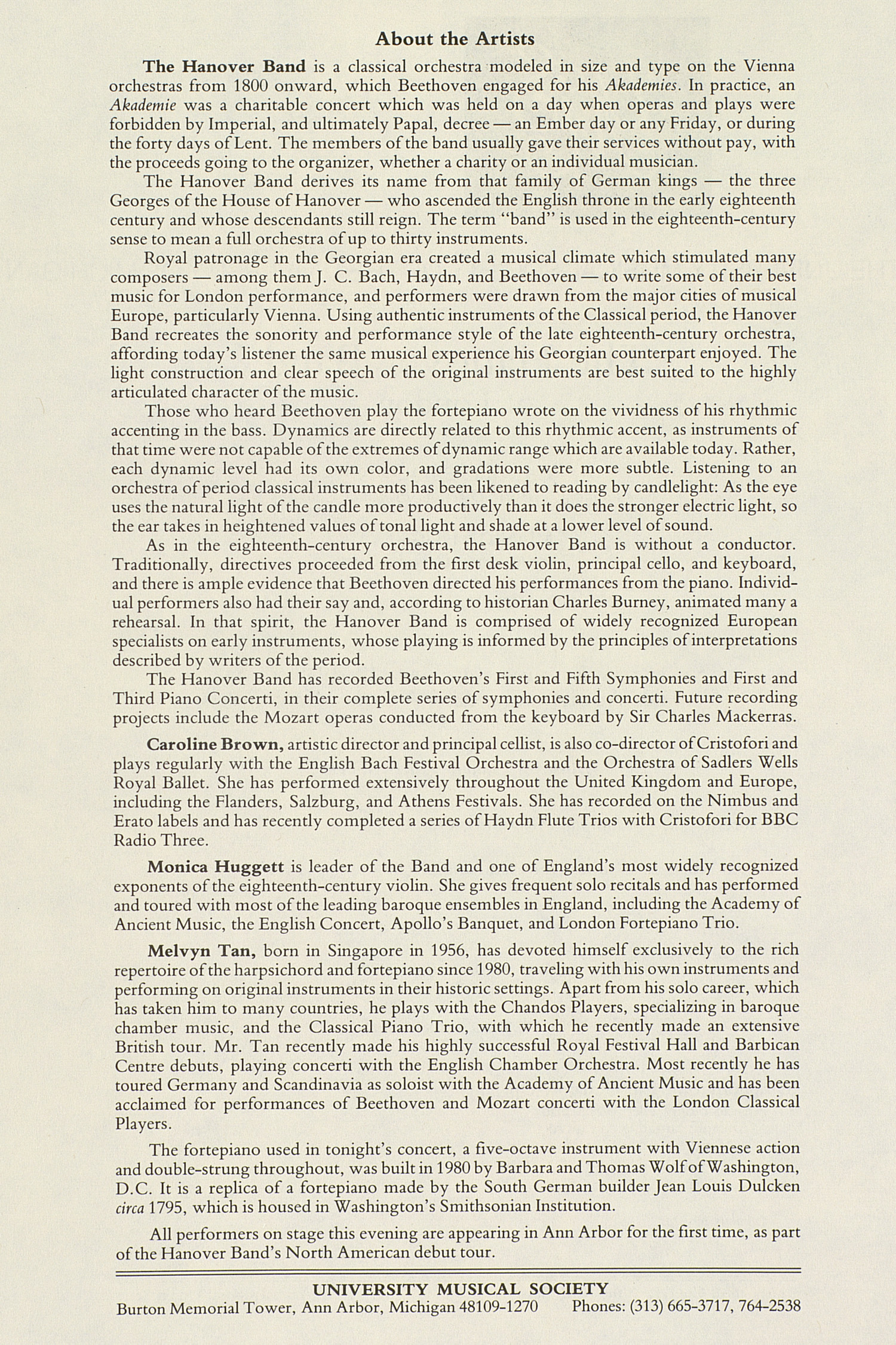 THE UNIVERSITY MUSICAL SOCIETY OF THE UNIVERSITY OF MICHIGAN
The Hanover Band
of London
CAROLINE BROWN Founder, Artistic Director, Principal Cellist
MONICA HUGGETT Director, First Desk Violinist
MELVYN TAN, Fortepianist
Saturday Evening, October 12, 1985, at 8:00 Hill Auditorium, Ann Arbor, Michigan
Music ofLudwig van Beethoven
Overture to The Creatures of Prometheus, Op. 43
Concerto No. 3 in C minor for Piano and Orchestra, Op. 37 Allegro con brio Largo Allegro
Melvyn Tan, Fortepianist
INTERMISSION
Symphony No. 1 in C major, Op. 21 Adagio molto, allegro con brio Andante cantabile con moto
Menuetto: allegro molto e vivace Adagio, allegro molto e vivace
Nimbus Records
Thirty-third Concert of the 107th Season 107th Annual Choral Union Series
About the Artists
The Hanover Band is a classical orchestra modeled in size and type on the Vienna orchestras from 1800 onward, which Beethoven engaged for his Akademies. In practice, an Akademie was a charitable concert which was held on a day when operas and plays were forbidden by Imperial, and ultimately Papal, decree -an Ember day or any Friday, or during the forty days of Lent. The members of the band usually gave their services without pay, with the proceeds going to the organizer, whether a charity or an individual musician.
The Hanover Band derives its name from that family of German kings -the three Georges of the House of Hanover -who ascended the English throne in the early eighteenth century and whose descendants still reign. The term "band" is used in the eighteenth-century sense to mean a full orchestra of up to thirty instruments.
Royal patronage in the Georgian era created a musical climate which stimulated many composers -among them J. C. Bach, Haydn, and Beethoven-to write some of their best music for London performance, and performers were drawn from the major cities of musical Europe, particularly Vienna. Using authentic instruments of the Classical period, the Hanover Band recreates the sonority and performance style of the late eighteenth-century orchestra, affording today's listener the same musical experience his Georgian counterpart enjoyed. The light construction and clear speech of the original instruments are best suited to the highly articulated character of the music.
Those who heard Beethoven play the fortepiano wrote on the vividness of his rhythmic accenting in the bass. Dynamics are directly related to this rhythmic accent, as instruments of that time were not capable of the extremes of dynamic range which are available today. Rather, each dynamic level had its own color, and gradations were more subtle. Listening to an orchestra of period classical instruments has been likened to reading by candlelight: As the eye uses the natural light of the candle more productively than it does the stronger electric light, so the ear takes in heightened values of tonal light and shade at a lower level of sound.
As in the eighteenth-century orchestra, the Hanover Band is without a conductor. Traditionally, directives proceeded from the first desk violin, principal cello, and keyboard, and there is ample evidence that Beethoven directed his performances from the piano. Individ?ual performers also had their say and, according to historian Charles Burney, animated many a rehearsal. In that spirit, the Hanover Band is comprised of widely recognized European specialists on early instruments, whose playing is informed by the principles of interpretations described by writers of the period.
The Hanover Band has recorded Beethoven's First and Fifth Symphonies and First and Third Piano Concerti, in their complete series of symphonies and concerti. Future recording projects include the Mozart operas conducted from the keyboard by Sir Charles Mackerras.
Caroline Brown, artistic director and principal cellist, is also co-director of Cristofori and plays regularly with the English Bach Festival Orchestra and the Orchestra of Sadlers Wells Royal Ballet. She has performed extensively throughout the United Kingdom and Europe, including the Flanders, Salzburg, and Athens Festivals. She has recorded on the Nimbus and Erato labels and has recently completed a series of Haydn Flute Trios with Cristofori for BBC Radio Three.
Monica Huggett is leader of the Band and one of England's most widely recognized exponents of the eighteenth-century violin. She gives frequent solo recitals and has performed and toured with most of the leading baroque ensembles in England, including the Academy of Ancient Music, the English Concert, Apollo's Banquet, and London Fortepiano Trio.
Melvyn Tan, born in Singapore in 1956, has devoted himself exclusively to the rich repertoire of the harpsichord and fortepiano since 1980, traveling with his own instruments and performing on original instruments in their historic settings. Apart from his solo career, which has taken him to many countries, he plays with the Chandos Players, specializing in baroque chamber music, and the Classical Piano Trio, with which he recently made an extensive British tour. Mr. Tan recently made his highly successful Royal Festival Hall and Barbican Centre debuts, playing concerti with the English Chamber Orchestra. Most recently he has toured Germany and Scandinavia as soloist with the Academy of Ancient Music and has been acclaimed for performances of Beethoven and Mozart concerti with the London Classical Players.
The fortepiano used in tonight's concert, a five-octave instrument with Viennese action and double-strung throughout, was built in 1980 by Barbara and Thomas Wolf of Washington, D.C. It is a replica of a fortepiano made by the South German builder Jean Louis Dulcken circa 1795, which is housed in Washington's Smithsonian Institution.
All performers on stage this evening are appearing in Ann Arbor for the first time, as part of the Hanover Band's North American debut tour.
UNIVERSITY MUSICAL SOCIETY
Burton Memorial Tower, Ann Arbor, Michigan 48109-1270 Phones: (313) 665-3717, 764-2538