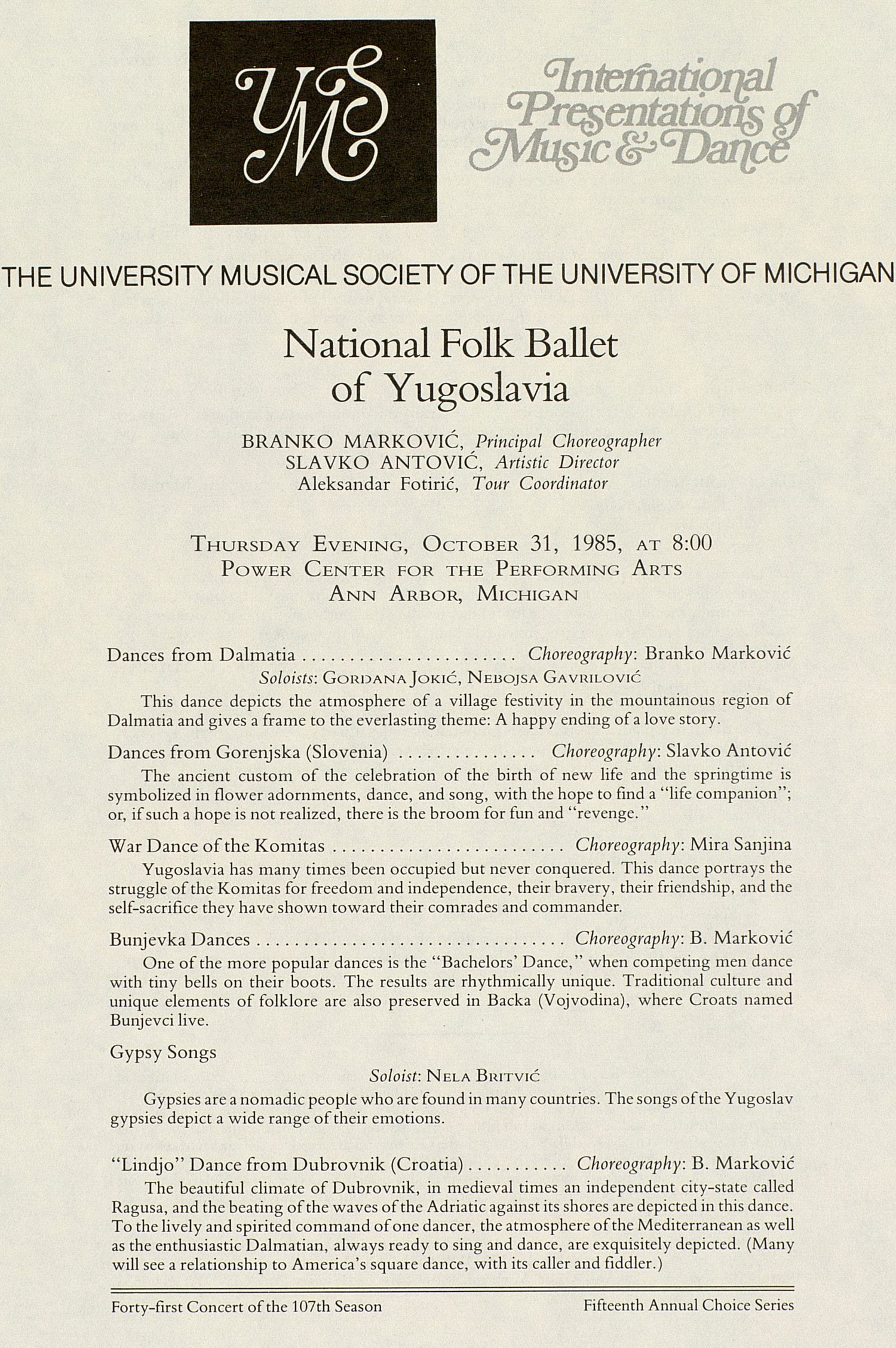 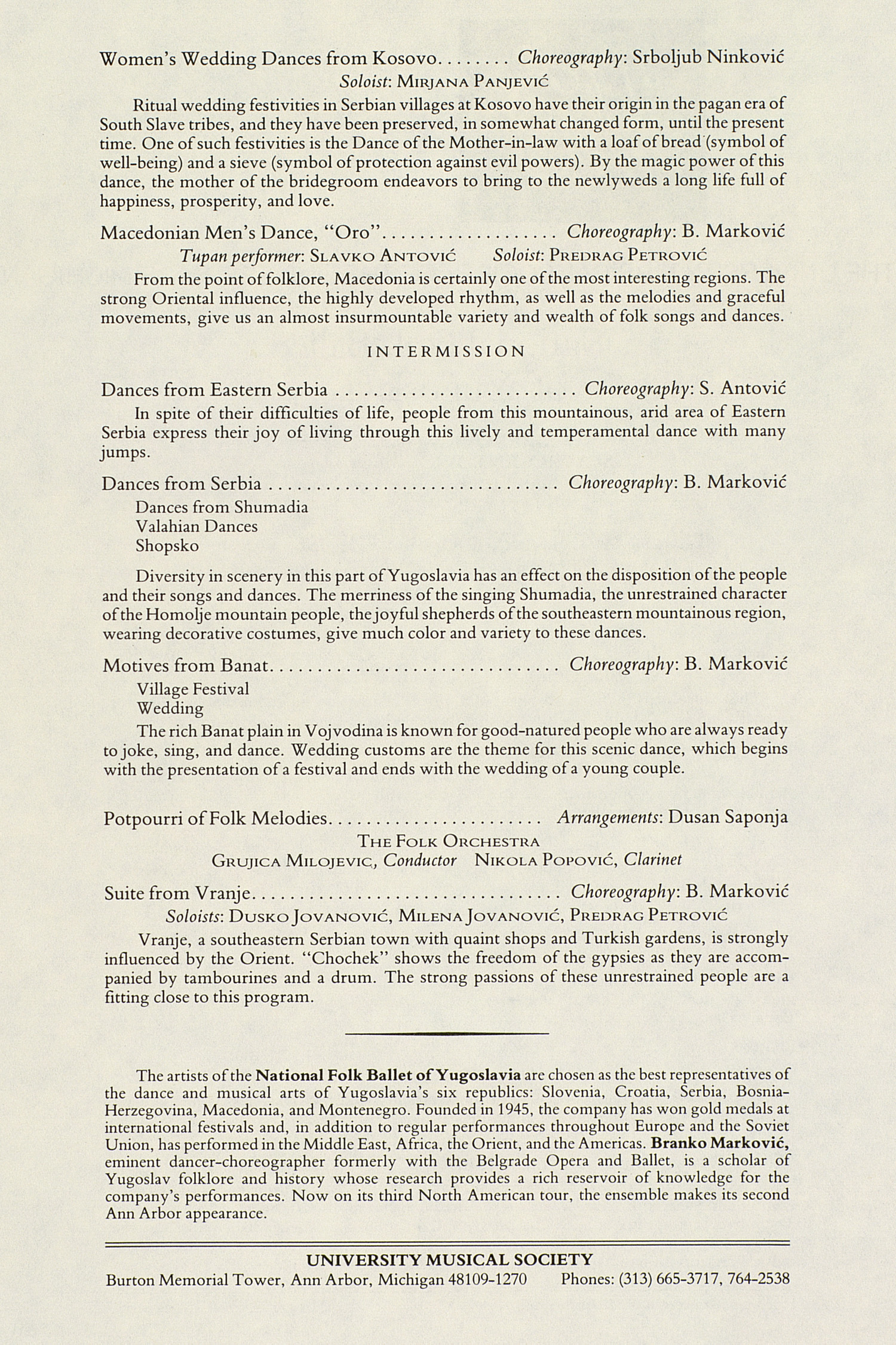 THE UNIVERSITY MUSICAL SOCIETY OF THE UNIVERSITY OF MICHIGAI
National Folk Ballet of Yugoslavia
BRANKO MARKOVIC, Principal Choreographer
SLAVKO ANTOVIC, Artistic Director
Aleksandar Fotiric, Tour Coordinator
Thursday Evening, October 31, 1985, at 8:00
Power Center for the Performing Arts
Ann Arbor, Michigan
Dances from Dalmatia....................... Choreography: Branko Markovic
Soloists: GoudanaJokic, Neuojsa Gavuilovic
This dance depicts the atmosphere of a village festivity in the mountainous region of Dalmatia and gives a frame to the everlasting theme: A happy ending of a love story.
Dances from Gorenjska (Slovenia)............... Choreography: Slavko Antovic
The ancient custom of the celebration of the birth of new life and the springtime is symbolized in flower adornments, dance, and song, with the hope to find a "life companion"; or, if such a hope is not realized, there is the broom for fun and "revenge."
War Dance of the Komitas......................... Choreography: Mira Sanjina
Yugoslavia has many times been occupied but never conquered. This dance portrays the struggle of the Komitas for freedom and independence, their bravery, their friendship, and the self-sacrifice they have shown toward their comrades and commander.
Bunjevka Dances................................. Choreography: B. Markovic
One of the more popular dances is the "Bachelors' Dance," when competing men dance with tiny bells on their boots. The results are rhythmically unique. Traditional culture and unique elements of folklore are also preserved in Backa (Vojvodina), where Croats named Bunjcvci live.
Gypsy Songs
Soloist: Nela Buitvic
Gypsies are a nomadic people who arc found in many countries. The songs of the Yugoslav gypsies depict a wide range of their emotions.
"Lindjo" Dance from Dubrovnik (Croatia)........... Choreography: B. Markovic
The beautiful climate of Dubrovnik, in medieval times an independent city-state called Ragusa, and the beating of the waves of the Adriatic against its shores are depicted in this dance. To the lively and spirited command of one dancer, the atmosphere of the Mediterranean as well as the enthusiastic Dalmatian, always ready to sing and dance, are exquisitely depicted. (Many will see a relationship to America's square dance, with its caller and fiddler.)
Forty-first Concert of the 107th Season Fifteenth Annual Choice Series
Women's Wedding Dances from Kosovo........Choreography: Srboljub Ninkovic
Soloist: Miujana Panjevic
Ritual wedding festivities in Serbian villages at Kosovo have their origin in the pagan era of South Slave tribes, and they have been preserved, in somewhat changed form, until the present time. One of such festivities is the Dance of the Mother-in-law with a loaf of bread (symbol of well-being) and a sieve (symbol of protection against evil powers). By the magic power of this dance, the mother of the bridegroom endeavors to bring to the newly weds a long life full of happiness, prosperity, and love.
Macedonian Men's Dance, "Oro"................... Choreography: B. Markovic
Tupan performer: Slavko Antovic Soloist: Predrag Petrovic From the point of folklore, Macedonia is certainly one of the most interesting regions. The strong Oriental influence, the highly developed rhythm, as well as the melodies and graceful movements, give us an almost insurmountable variety and wealth of folk songs and dances.
INTERMISSION
Dances from Eastern Serbia..........................Choreography: S. Antovic
In spite of their difficulties of life, people from this mountainous, arid area of Eastern Serbia express their joy of living through this lively and temperamental dance with many jumps.
Dances from Serbia............................... Choreography: B. Markovic
Dances from Shumadia Valahian Dances Shopsko
Diversity in scenery in this part of Yugoslavia has an effect on the disposition of the people and their songs and dances. The merriness of the singing Shumadia, the unrestrained character of the Homolje mountain people, the joyful shepherds of the southeastern mountainous region, wearing decorative costumes, give much color and variety to these dances.
Motives from Banat............................... Choreography: B. Markovic
Village Festival
Wedding
The rich Banat plain in Voj vodina is known for good-natured people who are always ready to joke, sing, and dance. Wedding customs are the theme for this scenic dance, which begins with the presentation of a festival and ends with the wedding of a young couple.
Potpourri of Folk Melodies....................... Arrangements: Dusan Saponja
The Folk Orchestra Grujica Milojevic, Conductor Nikola Popovic, Clarinet
Suite from Vranje................................. Choreography: B. Markovic
Soloists: DuskoJovanovic, MilenaJovanovic, Predrag Petrovic Vranje, a southeastern Serbian town with quaint shops and Turkish gardens, is strongly influenced by the Orient. "Chochek" shows the freedom of the gypsies as they are accom?panied by tambourines and a drum. The strong passions of these unrestrained people are a fitting close to this program.
The artists of the National Folk Ballet of Yugoslavia are chosen as the best representatives of the dance and musical arts of Yugoslavia's six republics: Slovenia, Croatia, Serbia, Bosnia-Herzegovina, Macedonia, and Montenegro. Founded in 1945, the company has won gold medals at international festivals and, in addition to regular performances throughout Europe and the Soviet Union, has performed in the Middle East, Africa, the Orient, and the Americas. Branko Markovic, eminent dancer-choreographer formerly with the Belgrade Opera and Ballet, is a scholar of Yugoslav folklore and history whose research provides a rich reservoir of knowledge for the company's performances. Now on its third North American tour, the ensemble makes its second Ann Arbor appearance.
UNIVERSITY MUSICAL SOCIETY
Burton Memorial Tower, Ann Arbor, Michigan 48109-1270 Phones: (313) 665-3717, 764-2538