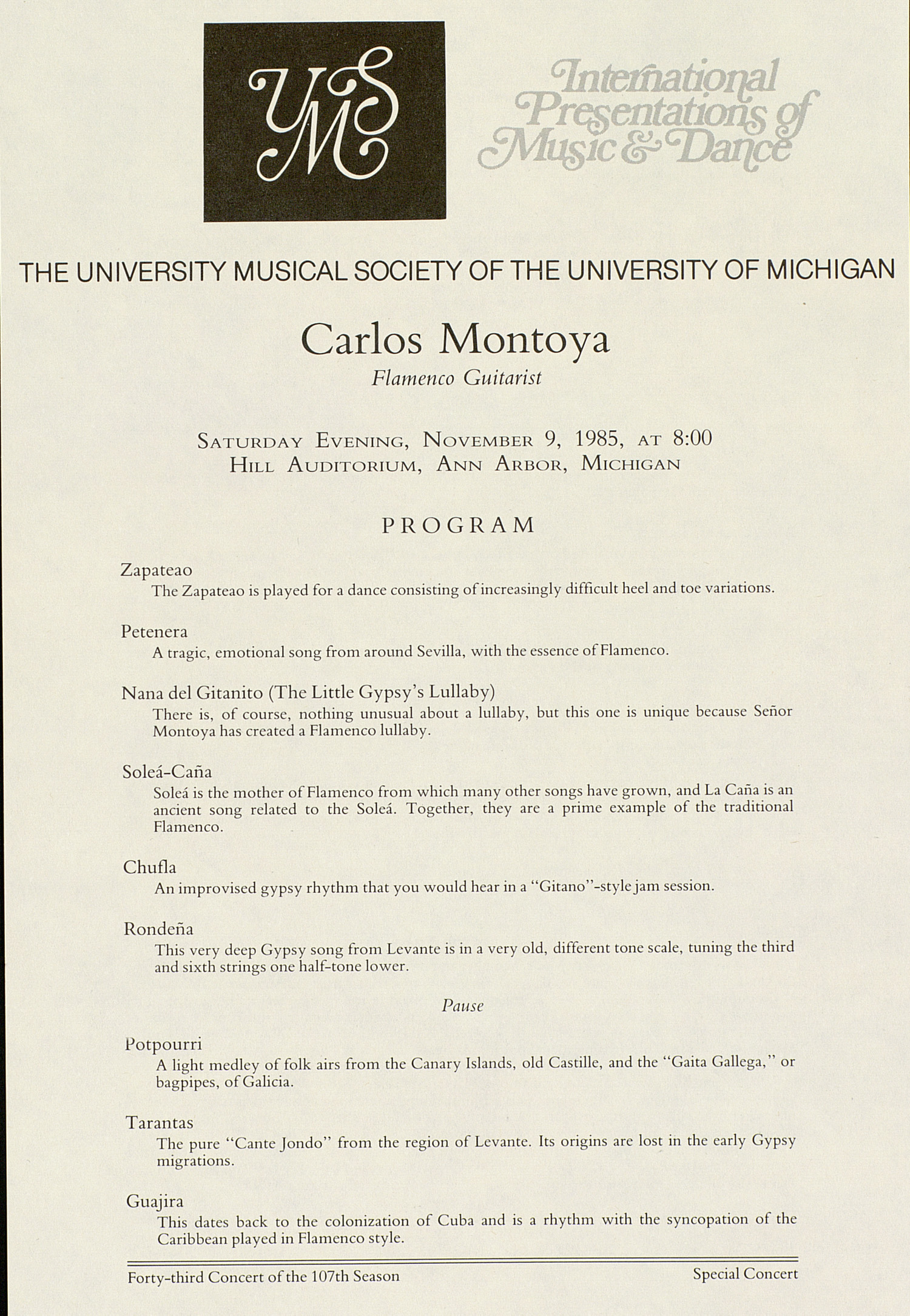 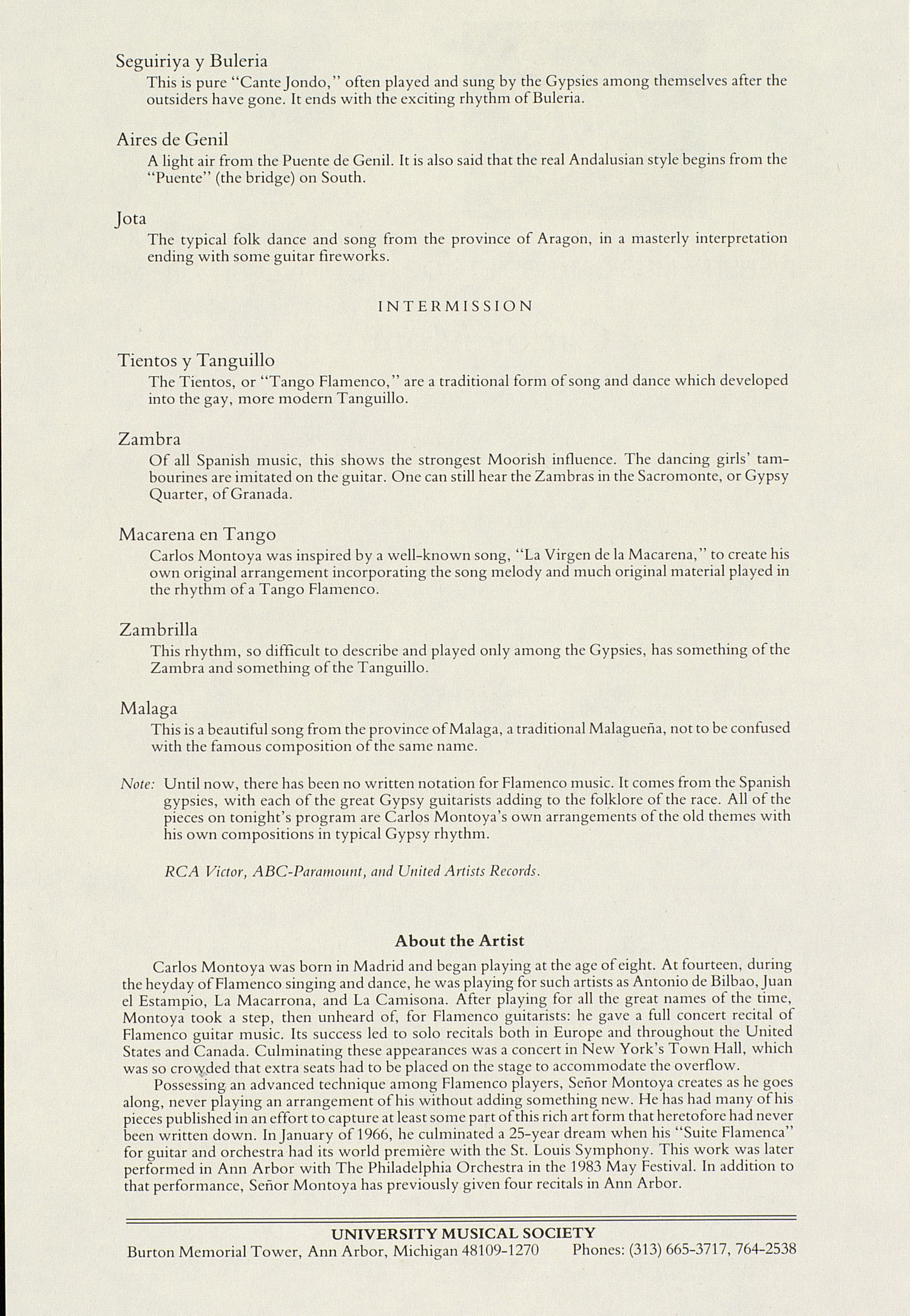 THE UNIVERSITY MUSICAL SOCIETY OF THE UNIVERSITY OF MICHIGAN
Carlos Montoya
Flamenco Guitarist
Saturday Evening, November 9, 1985, at 8:00 Hill Auditorium, Ann Arbor, Michigan
PROGRAM
Zapateao
The Zapateao is played for a dance consisting of increasingly difficult heel and toe variations.
Petenera
A tragic, emotional song from around Scvilla, with the essence of Flamenco.
Nana del Gitanito (The Little Gypsy's Lullaby)
There is, of course, nothing unusual about a lullaby, but this one is unique because Seiior Montoya has created a Flamenco lullaby.
Solea-Cana
Solea is the mother of Flamenco from which many other songs have grown, and La Caiia is an ancient song related to the Solea. Together, they arc a prime example of the traditional Flamenco.
Chufla
An improvised gypsy rhythm that you would hear in a "Gitano"-stylejam session.
Rondena
This very deep Gypsy song from Levante is in a very old, different tone scale, tuning the third and sixth strings one half-tone lower.
Pause
Potpourri
A light medley of folk airs from the Canary Islands, old Castille, and the "Gaita Gallcga," or bagpipes, of Galicia.
Tarantas
The pure "Cante Jondo" from the region of Levante. Its origins are lost in the early Gypsy migrations.
Guajira
This dates back to the colonization of Cuba and is a rhythm with the syncopation of the Caribbean played in Flamenco style.
Forty-third Concert of the 107th Season Special Concert
Scguiriya y Bulcria
This is pure "Cantcjondo," often played and sung by the Gypsies among themselves after the outsiders have gone. It ends with the exciting rhythm of Bulcria.
Aires dc Genii
A light air from the Puente de Genii. It is also said that the real Andalusian style begins from the "Puente" (the bridge) on South.
Jota
The typical folk dance and song from the province of Aragon, in a masterly interpretation ending with some guitar fireworks.
INTERMISSION
Ticntos y Tanguillo
The Ticntos, or "Tango Flamenco," arc a traditional form of song and dance which developed into the gay, more modern Tanguillo.
Zambra
Of all Spanish music, this shows the strongest Moorish influence. The dancing girls' tam?bourines are imitated on the guitar. One can still hear the Zambras in the Sacromonte, or Gypsy Quarter, of Granada.
Macarcna en Tango
Carlos Montoya was inspired by a well-known song, "La Virgen de la Macarena," to create his own original arrangement incorporating the song melody and much original material played in the rhythm of a Tango Flamenco.
Zambrilla
This rhythm, so difficult to describe and played only among the Gypsies, has something of the Zambra and something of the Tanguillo.
Malaga
This is a beautiful song from the province of Malaga, a traditional Malagueria, not to be confused with the famous composition of the same name.
Note: Until now, there has been no written notation for Flamenco music. It comes from the Spanish gypsies, with each of the great Gypsy guitarists adding to the folklore of the race. All of the pieces on tonight's program are Carlos Montoya's own arrangements of the old themes with his own compositions in typical Gypsy rhythm.
RCA Victor, ABC-Paramount, and United Artists Records.
About the Artist
Carlos Montoya was born in Madrid and began playing at the age of eight. At fourteen, during the heyday of Flamenco singing and dance, he was playing for such artists as Antonio de Bilbao, Juan el Estampio, La Macarrona, and La Camisona. After playing for all the great names of the time, Montoya took a step, then unheard of, for Flamenco guitarists: he gave a full concert recital of Flamenco guitar music. Its success led to solo recitals both in Europe and throughout the United States and Canada. Culminating these appearances was a concert in New York's Town Hall, which was so crowded that extra seats had to be placed on the stage to accommodate the overflow.
Possessing an advanced technique among Flamenco players, Seiior Montoya creates as he goes along, never playing an arrangement of his without adding something new. He has had many of his pieces published in an effort to capture at least some part of this rich art form that heretofore had never been written down. In January of 1966, he culminated a 25-year dream when his "Suite Flamenca" for guitar and orchestra had its world premiere with the St. Louis Symphony. This work was later performed in Ann Arbor with The Philadelphia Orchestra in the 1983 May Festival. In addition to that performance, Serior Montoya has previously given four recitals in Ann Arbor.
UNIVERSITY MUSICAL SOCIETY
Burton Memorial Tower, Ann Arbor, Michigan 48109-1270 Phones: (313) 665-3717, 764-2538