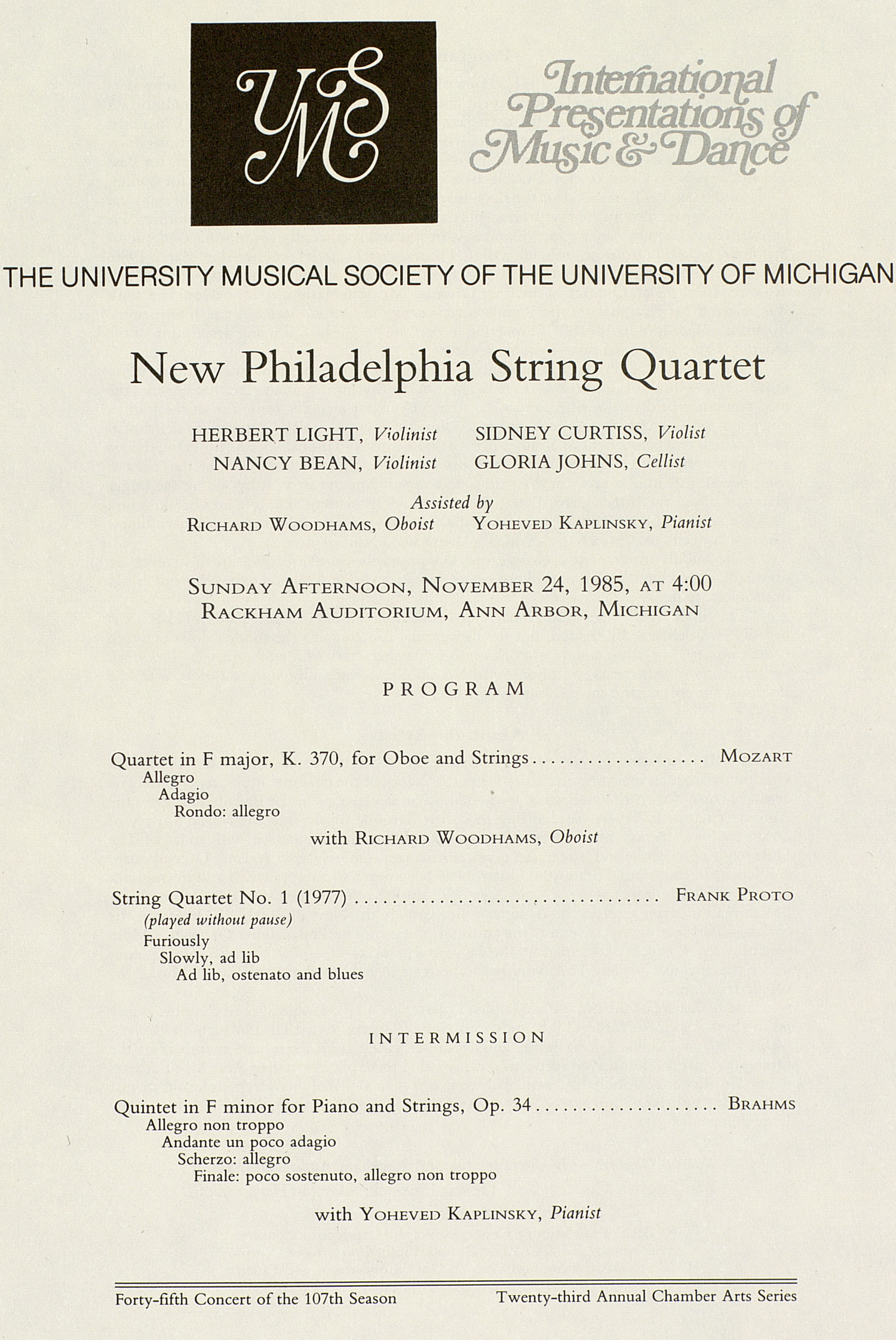 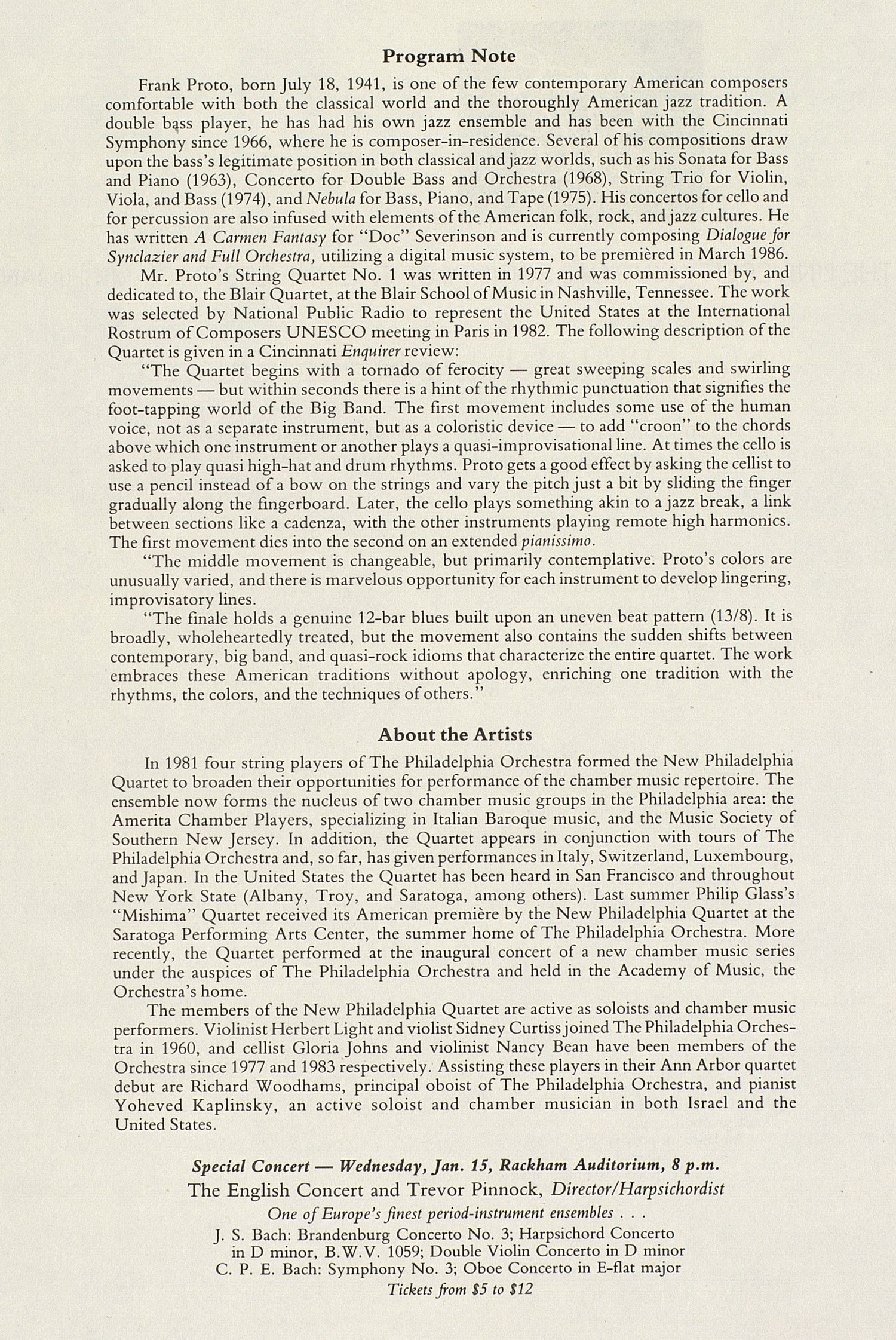 THE UNIVERSITY MUSICAL SOCIETY OF THE UNIVERSITY OF MICHIGAN
New Philadelphia String Quartet
HERBERT LIGHT, Violinist SIDNEY CURTISS, Violist NANCY BEAN, Violinist GLORIA JOHNS, Cellist
Assisted by Richard Woodhams, Oboist Yoheved Kaplinsky, Pianist
Sunday Afternoon, November 24, 1985, at 4:00 Rackham Auditorium, Ann Arbor, Michigan
PROGRAM
Quartet in F major, K. 370, for Oboe and Strings................... Mozart
Allegro Adagio
Rondo: allegro
with Richard Woodhams, Oboist
String Quartet No. 1 (1977)................................. Frank Proto
(played ivithout pause) Furiously
Slowly, ad lib
Ad lib, ostenato and blues
INTERMISSION
Quintet in F minor for Piano and Strings, Op. 34.................... Brahms
Allegro non troppo Andante un poco adagio Scherzo: allegro
Finale: poco sostenuto, allegro non troppo
with Yoheved Kaplinsky, Pianist
Forty-fifth Concert of the 107th Season Twenty-third Annual Chamber Arts Series
Program Note
Frank Proto, born July 18, 1941, is one of the few contemporary American composers comfortable with both the classical world and the thoroughly American jazz tradition. A double ba.ss player, he has had his own jazz ensemble and has been with the Cincinnati Symphony since 1966, where he is composer-in-rcsidence. Several of his compositions draw upon the bass's legitimate position in both classical and jazz worlds, such as his Sonata for Bass and Piano (1963), Concerto for Double Bass and Orchestra (1968), String Trio for Violin, Viola, and Bass (1974), and Nebula for Bass, Piano, and Tape (1975). His concertos for cello and for percussion are also infused with elements of the American folk, rock, and jazz cultures. He has written A Carmen Fantasy for "Doc" Severinson and is currently composing Dialogue for Syndazier and Full Orchestra, utilizing a digital music system, to be premiered in March 1986.
Mr. Proto's String Quartet No. 1 was written in 1977 and was commissioned by, and dedicated to, the Blair Quartet, at the Blair School of Music in Nashville, Tennessee. The work was selected by National Public Radio to represent the United States at the International Rostrum of Composers UNESCO meeting in Paris in 1982. The following description of the Quartet is given in a Cincinnati Enquirer review:
"The Quartet begins with a tornado of ferocity -great sweeping scales and swirling movements -but within seconds there is a hint of the rhythmic punctuation that signifies the foot-tapping world of the Big Band. The first movement includes some use of the human voice, not as a separate instrument, but as a coloristic device -to add "croon" to the chords above which one instrument or another plays a quasi-improvisational line. At times the cello is asked to play quasi high-hat and drum rhythms. Proto gets a good effect by asking the cellist to use a pencil instead of a bow on the strings and vary the pitch just a bit by sliding the finger gradually along the fingerboard. Later, the cello plays something akin to a jazz break, a link between sections like a cadenza, with the other instruments playing remote high harmonics. The first movement dies into the second on an extended pianissimo.
"The middle movement is changeable, but primarily contemplative. Proto's colors are unusually varied, and there is marvelous opportunity for each instrument to develop lingering, improvisatory lines.
"The finale holds a genuine 12-bar blues built upon an uneven beat pattern (138). It is broadly, wholeheartedly treated, but the movement also contains the sudden shifts between contemporary, big band, and quasi-rock idioms that characterize the entire quartet. The work embraces these American traditions without apology, enriching one tradition with the rhythms, the colors, and the techniques of others."
About the Artists
In 1981 four string players of The Philadelphia Orchestra formed the New Philadelphia Quartet to broaden their opportunities for performance of the chamber music repertoire. The ensemble now forms the nucleus of two chamber music groups in the Philadelphia area: the Amerita Chamber Players, specializing in Italian Baroque music, and the Music Society of Southern New Jersey. In addition, the Quartet appears in conjunction with tours of The Philadelphia Orchestra and, so far, has given performances in Italy, Switzerland, Luxembourg, and Japan. In the United States the Quartet has been heard in San Francisco and throughout New York State (Albany, Troy, and Saratoga, among others). Last summer Philip Glass's "Mishima" Quartet received its American premiere by the New Philadelphia Quartet at the Saratoga Performing Arts Center, the summer home of The Philadelphia Orchestra. More recently, the Quartet performed at the inaugural concert of a new chamber music series under the auspices of The Philadelphia Orchestra and held in the Academy of Music, the Orchestra's home.
The members of the New Philadelphia Quartet arc active as soloists and chamber music performers. Violinist Herbert Light and violist Sidney Curtiss joined The Philadelphia Orches?tra in 1960, and cellist Gloria Johns and violinist Nancy Bean have been members of the Orchestra since 1977 and 1983 respectively. Assisting these players in their Ann Arbor quartet debut are Richard Woodhams, principal oboist of The Philadelphia Orchestra, and pianist Yoheved Kaplinsky, an active soloist and chamber musician in both Israel and the United States.
Special Concert -Wednesday, Jan. IS, Rackham Auditorium, 8 p.m. The English Concert and Trevor Pinnock, DirectorHarpsichordist
One of Europe's finest period-instrument ensembles . . . J. S. Bach: Brandenburg Concerto No. 3; Harpsichord Concerto
in D minor, B.W.V. 1059; Double Violin Concerto in D minor C. P. ?. Bach: Symphony No. 3; Oboe Concerto in E-flat major Tickets from S5 to S12