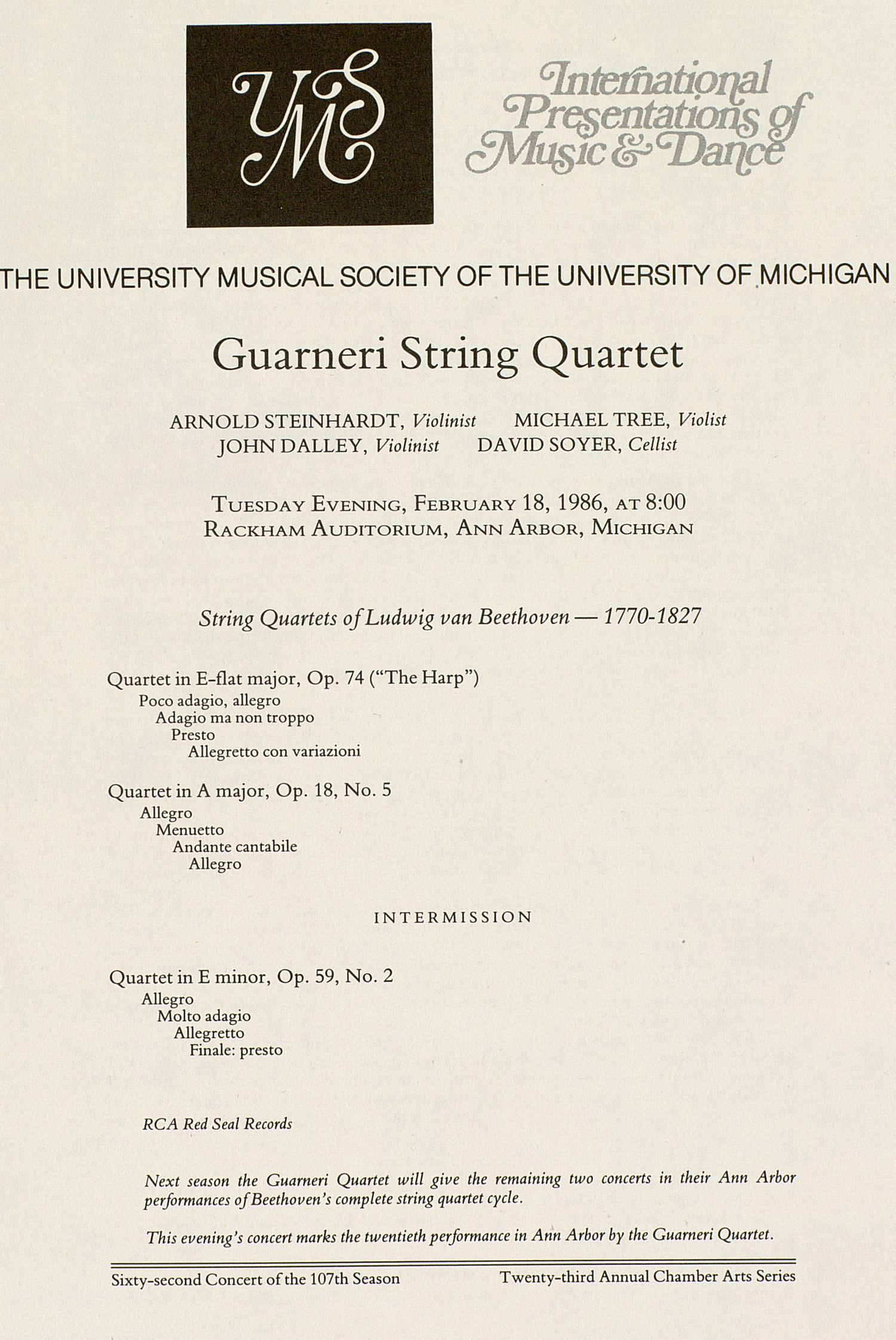 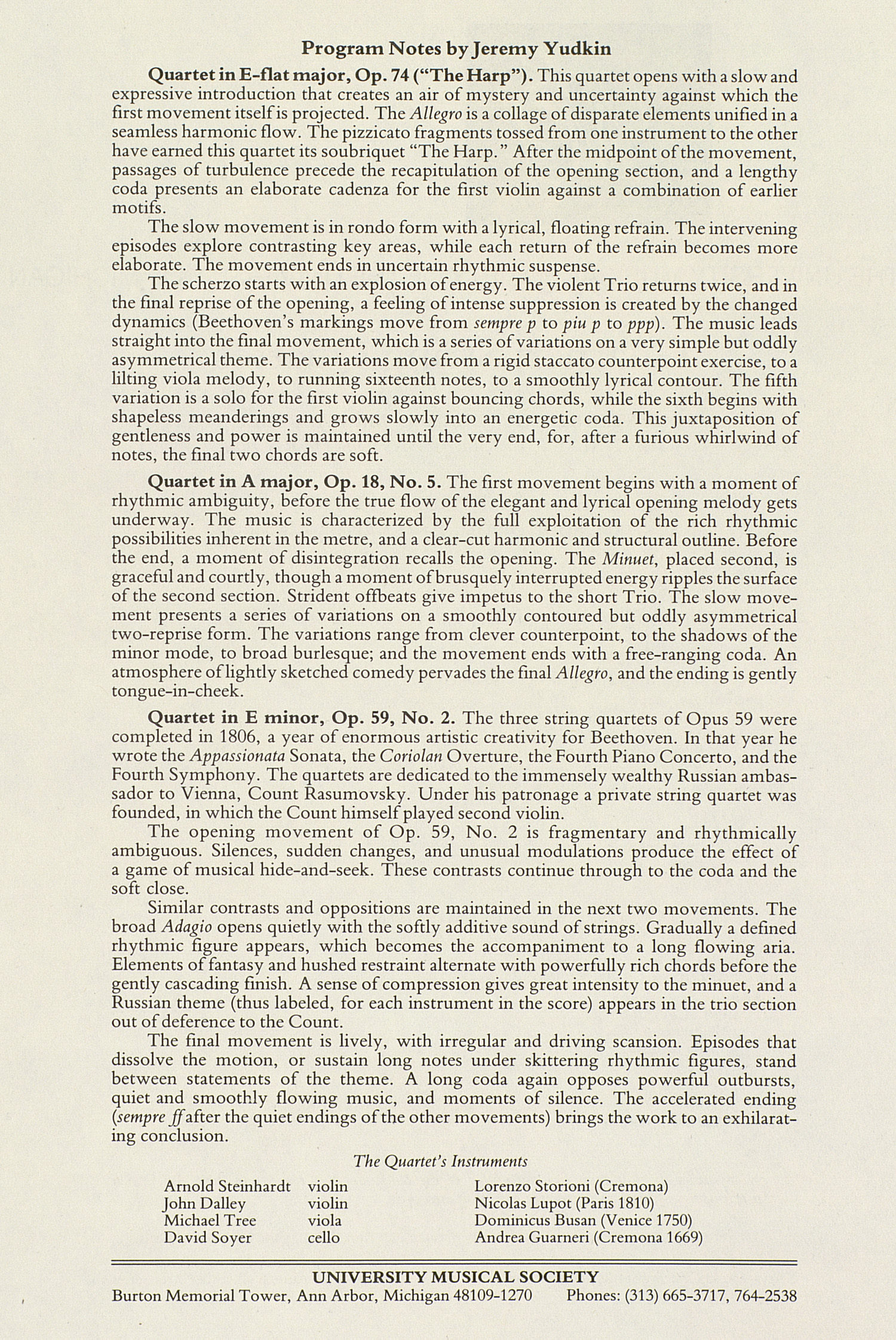 THE UNIVERSITY MUSICAL SOCIETY OF THE UNIVERSITY OF MICHIGAN
Guarneri String Quartet
ARNOLD STEINHARDT, Violinist MICHAEL TREE, Violist JOHN DALLEY, Violinist DAVID SOYER, Cellist
Tuesday Evening, February 18, 1986, at 8:00 Rackham Auditorium, Ann Arbor, Michigan
String Quartets ofLudwig van Beethoven-1770-1827
Quartet in E-flat major, Op. 74 ("The Harp") Poco adagio, allegro Adagio ma non troppo Presto
Allegretto con variazioni
Quartet in A major, Op. 18, No. 5 Allegro Menuetto
Andante cantabile Allegro
INTERMISSION
Quartet in E minor, Op. 59, No. 2 Allegro
Molto adagio Allegretto Finale: presto
RCA Red Seal Records
Next season the Guarneri Quartet will give the remaining two concerts in their Ann Arbor performances of Beethoven's complete string quartet cycle.
This evening's concert marks the twentieth performance in Ann Arbor by the Guarneri Quartet. Sixty-second Concert of the 107th Season Twenty-third Annual Chamber Arts Series
Program Notes by Jeremy Yudkin
Quartet in E-flat major, Op. 74 ("The Harp"). This quartet opens with a slow and expressive introduction that creates an air of mystery and uncertainty against which the first movement itself is projected. The Allegro is a collage of disparate elements unified in a seamless harmonic flow. The pizzicato fragments tossed from one instrument to the other have earned this quartet its soubriquet "The Harp." After the midpoint of the movement, passages of turbulence precede the recapitulation of the opening section, and a lengthy coda presents an elaborate cadenza for the first violin against a combination of earlier motifs.
The slow movement is in rondo form with a lyrical, floating refrain. The intervening episodes explore contrasting key areas, while each return of the refrain becomes more elaborate. The movement ends in uncertain rhythmic suspense.
The scherzo starts with an explosion of energy. The violent Trio returns twice, and in the final reprise of the opening, a feeling of intense suppression is created by the changed dynamics (Beethoven's markings move from sempre p to piu p to ppp)The music leads straight into the final movement, which is a series of variations on a very simple but oddly asymmetrical theme. The variations move from a rigid staccato counterpoint exercise, to a lilting viola melody, to running sixteenth notes, to a smoothly lyrical contour. The fifth variation is a solo for the first violin against bouncing chords, while the sixth begins with shapeless meanderings and grows slowly into an energetic coda. This juxtaposition of gentleness and power is maintained until the very end, for, after a furious whirlwind of notes, the final two chords are soft.
Quartet in A major, Op. 18, No. 5. The first movement begins with a moment of rhythmic ambiguity, before the true flow of the elegant and lyrical opening melody gets underway. The music is characterized by the full exploitation of the rich rhythmic possibilities inherent in the metre, and a clear-cut harmonic and structural outline. Before the end, a moment of disintegration recalls the opening. The Minuet, placed second, is graceful and courtly, though a moment of brusquely interrupted energy ripples the surface of the second section. Strident offbeats give impetus to the short Trio. The slow move?ment presents a series of variations on a smoothly contoured but oddly asymmetrical two-reprise form. The variations range from clever counterpoint, to the shadows of the minor mode, to broad burlesque; and the movement ends with a free-ranging coda. An atmosphere of lightly sketched comedy pervades the final Allegro, and the ending is gently tongue-in-cheek.
Quartet in E minor, Op. 59, No. 2. The three string quartets of Opus 59 were completed in 1806, a year of enormous artistic creativity for Beethoven. In that year he wrote the Appassionato Sonata, the Coriolan Overture, the Fourth Piano Concerto, and the Fourth Symphony. The quartets are dedicated to the immensely wealthy Russian ambas?sador to Vienna, Count Rasumovsky. Under his patronage a private string quartet was founded, in which the Count himself played second violin.
The opening movement of Op. 59, No. 2 is fragmentary and rhythmically ambiguous. Silences, sudden changes, and unusual modulations produce the effect of a game of musical hide-and-seek. These contrasts continue through to the coda and the soft close.
Similar contrasts and oppositions are maintained in the next two movements. The broad Adagio opens quietly with the softly additive sound of strings. Gradually a defined rhythmic figure appears, which becomes the accompaniment to a long flowing aria. Elements of fantasy and hushed restraint alternate with powerfully rich chords before the gently cascading finish. A sense of compression gives great intensity to the minuet, and a Russian theme (thus labeled, for each instrument in the score) appears in the trio section out of deference to the Count.
The final movement is lively, with irregular and driving scansion. Episodes that dissolve the motion, or sustain long notes under skittering rhythmic figures, stand between statements of the theme. A long coda again opposes powerful outbursts, quiet and smoothly flowing music, and moments of silence. The accelerated ending {sempre Rafter the quiet endings of the other movements) brings the work to an exhilarat?ing conclusion.
The Quartet's Instruments
Arnold Steinhardt violin Lorenzo Storioni (Cremona)
John Dalley violin Nicolas Lupot (Paris 1810)
Michael Tree viola Dominicus Busan (Venice 1750)
David Soyer cello Andrea Guarneri (Cremona 1669)
UNIVERSITY MUSICAL SOCIETY
Burton Memorial Tower, Ann Arbor, Michigan 48109-1270 Phones: (313) 665-3717, 764-2538